Read Wolves and the River of Stone Online

Wolves and the River of Stone 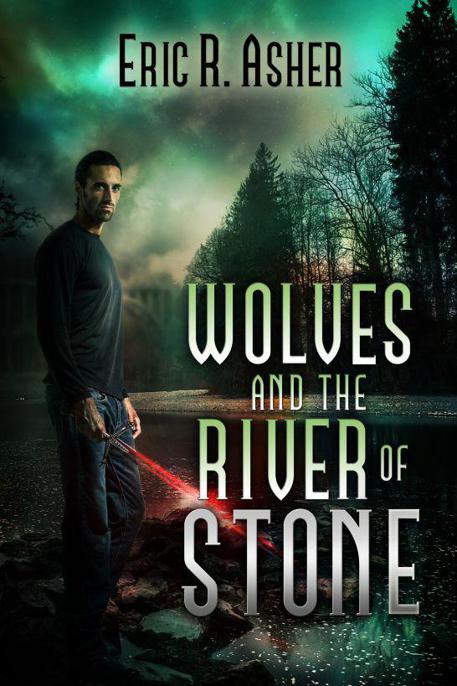 WOLVES AND THE RIVER OF STONE

Wolves and the River of Stone

Smashwords Edition License Notes: This ebook is licensed for your personal enjoyment only. This ebook may not be re-sold or given away to other people. If you would like to share this book with another person, please purchase an additional copy for each recipient. If you're reading this book and did not purchase it, or it was not purchased for your use only, then please return to Smashwords.com and purchase your own copy. Thank you for respecting the hard work of this author.

For that single word. Loathed by some, loved by many. Bacon.

A special thanks to everyone who spares an encouraging word for the creative people in their lives.

Thanks to the Critters.org workshop and their superb critiques.

Thank you so very much to everyone who has taken the time to read Vesik, The Series, and even deeper thanks to those of you that have become The Patrons of Death’s Door.

Thank you to my editor, Laura Matheson, whose wise words saved me from more than one terrible, and sometimes amusing, misstep.

WOLVES AND THE RIVER OF STONE

M
y name is Damian Valdis Vesik. I am a necromancer. The dismembered limbs littering the soft grass at my feet used to be a pair of zombies. The small man with terror in his eyes, shaking between the supports of a rusty old bridge is Lewis Hood, servant of Philip Pinkerton, one time love of my master, Zola.

I eased the bullets into my six-barreled pepperbox one at a time, forgoing the speed loader in the name of intimidation. Lewis’s eyes went wide and locked onto the gun.

“Where is she?” I said. I took a deep breath, the Missouri River beside us masking every other scent aside from the decay of the blasted zombies. The shadowed tree lines hid us from the nearby population of Saint Charles.

Two days ago we learned Philip was still alive. Yesterday his servants kidnapped Zola. I didn’t know why they took her, but she didn’t go quietly. The Watchers would be using a spatula to clean out the alley where she was taken.

“You sicced your zombies on us?” I said. “A fairy and a necromancer?” The zombies had gone down fast with help from a demon staff inlaid with decorative, and functional, silverwork. I glared at Lewis. “I find myself ... irritated.”

Lewis held up his hand and started to speak.

I holstered the pepperbox under my arm and wrapped my hand around the shield rune on my staff. A flowing glass surface sprang to life as a thread of power wound into the wood and metal.

Despair washed over Lewis’s face. He was breaking, and I could see it.

I leaned the staff against the bridge support opposite Lewis and released my grip on the silver rune. The shield around me dissipated and I had a short, clear path to him. My pepperbox hissed as I drew it from the shoulder holster and leveled it at Lewis.

“Where’s Zola?” I said, my voice flat, but beginning to snarl.

Thunder and flame roared from one of the six barrels as Lewis’s kneecap burst into a fine mist.

He screamed and fell into the mud. I won’t deny the glimmer of satisfaction in my gut.

“Get away!” he whimpered hysterically.

“Thug to beggar in sixty seconds,” I said as I moved my finger to the second trigger on my pistol. The second trigger was fairy work, capable of firing all six barrels at once—or the five chambered rounds, in this case. “Where’s Zola?”

His eyes were wide. I could see the whites around his irises as they flicked from his knee to my gun and up to my eyes. “Please don’t.”

I moved my finger back to the first trigger. “Tell me where she is or I blow out the other one.” I shifted my aim from his head to his good knee.

He grimaced and his head sagged. “Zion,” he said as he gasped for air, “Mount Zion Church ... Hallsville.”

I nodded and holstered the pistol. Relief spread across Lewis’s face a moment before a sword sprang from his neck. The fairy oozed out of the shadows behind him, a savage grin split his pointed features as he jerked his sword down and back. Lewis’s body fell forward between me and the seven-foot fairy, a look of confusion etched across the corpse’s forehead.

“What if he was lying, Foster?” I said as I cocked an eyebrow.

“Then you can raise him and I’ll kill him again, put that necromancy to good use.” Foster casually wiped his sword off with a swatch of Lewis’s white shirt, flexing his black-and-white wings as he bent down. “That was too fast.”

I shook my head and muttered, “Fairies.” Fairies are one of the most merciless races I’ve ever met. You screw with their friends or family, and they’ll tear you into pieces. Very small pieces. I’ve heard some of the old gods are more severe, but I’ve yet to meet any.

I shrugged. “Oh, I don’t know. Let’s ask.” I toed Lewis’s head and spoke slowly. “Do you have a map to Hallsville, Lewis? Lewis? Are you okay?”

“Shut up, Damian.” Foster’s wings twitched as he sheathed his sword.

“We need to get rid of the body,” I said with a broad grin as I slapped Foster on the shoulder.

He sighed and rolled his eyes. “Stand back a second.” I stepped away as Foster drew a circle in the mud around Lewis and the zombie parts. “Hand me your staff.”

Reluctantly, I handed my staff over. “You know, your mom will kill you if you hurt my staff.”

“At least she’ll kill you too.” Foster smiled and turned his head back to the corpse. He whispered “S
omes reverto terra”
and brought the ferrule of the staff down hard in the center of the circle. He quickly stepped away as a murky grayish light ran from the staff and flared to the edges of the circle. The earth churned and swallowed the bodies in a quiet rumble as the scent of tilled soil and river water reached my nose.

The riverfront fell into silence again. Foster tossed my staff to me. It smacked against my palm as I caught it, and he snapped into his smaller form in a dim flash of white light.

F
rank was working the shop for me. I was tempted to stop by just to see if my sister, Sam, was hanging around. I hadn’t heard from her as much since she’d gotten more serious with Frank. Sam and Frank, if ever there was a sign of impending apocalypse, but there were bigger things to worry about at that moment. I knew Sam was worried about Zola too, but Foster had more productive ideas to fill our evening than catching up with the family. He was positive Carter would know how to get to the church in Hallsville without consulting the web. After our last online map sent us a hundred miles south of our intended destination, I wasn’t arguing.

We set off for Carter’s house without delay so I could meet my first werewolf. Poor Vicky—my custom ‘32 Ford, complete with flames. Nervous energy had me drumming her steering wheel into submission. Foster camped out in my oversized electric coffee mug, which happened to be filled with water and soap suds at the moment, and was plugged in to a retrofitted cigarette lighter on Vicky’s dashboard.

The Bewitching Twin by Fletcher, Donna
The Conversion by Joseph Olshan
Water by Harmony, Terra
Scrap Metal by Harper Fox
The Color of Hope by Kim Cash Tate
The Paths of the Dead (Viscount of Adrilankha) by Steven Brust
Falling by Kailin Gow
2007 - A tale etched in blood and hard black pencel by Christopher Brookmyre, Prefers to remain anonymous
Punishing His Accountant: Caught Stealing by Roberts, Alicia
Command and Control by Shelli Stevens