Read Within the Hollow Crown Online

Within the Hollow Crown 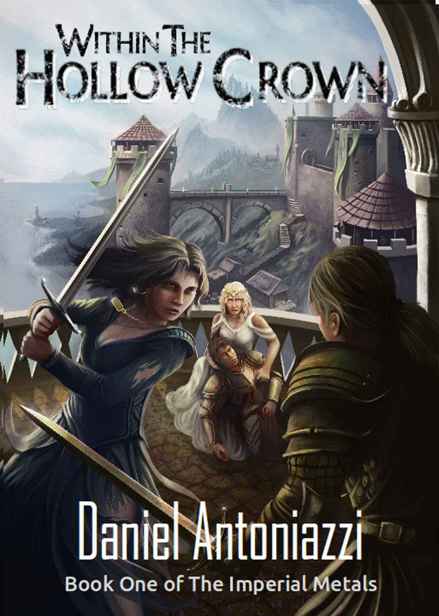 The
Imperial Metals, Book One

Within the Hollow Crown

All characters in this work are fictitious. Any resemblance to real persons, living or dead, is purely coincidental. And hilarious.

All events described in this book actually happened. Just not on our world.

Chapter 1: The Toll at the Bridge

Chapter 2: Nothing But Steel

Chapter 3: A Glorious Quest Worthy of a Librarian

Chapter 4: Things To Talk About When Dining With The Count

Chapter 7: The Trade Commission of Taverns and Inns

Chapter 9: A Noble In Name Only

Chapter 13: Attack of the Turin-Sen

Chapter 14: An Uninvited Guest at the Wedding

Chapter 15: A Pirate in Name Only

Chapter 20: A Match Made In A Match Factory

Chapter 24: Under the Old Oak Tree

Chapter 26
: The Line of Kings

Chapter 31: The Road to Recovery

Chapter 34: Over the Years

Chapter 35: The Lair of the Beast

Chapter 36: The End of the Lesson

Chapter 37: The Edge of the World

Chapter 43: A History of Drentar

Chapter 53: Men of the Kingdom

Chapter 55: The Worth of a Man

Chapter 65: A Silence of Choice

Chapter 68: The Words You Learn First

Chapter 71: Attack on the Queen

Chapter 75: Heart of a Noble

Chapter 77: Battle of the Turin-Sen

Chapter 84: The Writing on the Wall

Chapter 88: The Eye of the Storm

Chapter 89: The Battle of Deliem

Chapter 92: The Toll at the Docks

Epilogue: The Tower at Goldmere

My Mom, Dad, and favorite sister (Irene) for believing in the book nonstop, even when the smart money was pointing the other way.

Irene, again, for finding the title.

Bobby Brimmer, for going first and proving there was nothing to fear. You can find his writing at his
website
.

Raymond Minnaar, for the cover art.
Find more of his art at his
website
.

Pheobe Boynton, for the map.
Find more of her art and costume design at her
website
.

And
Kristen Eaton, for liking the part with the juggling.

And a Very Special Thanks to...

Dedicated
to my Mom and Dad.

For God’s sake, let us sit upon the ground

A
nd tell sad stories of the death of kings;

How some have been deposed; some slain in war,

Some haunted by the ghosts they have deposed;

Some poison'd by their wives: some sleeping kill'd;

All murder'd: for within the hollow crown

That rounds the mortal temples of a king

Keeps Death his court and there the antic sits,

Scoffing his state and grinning at his pomp,

Allowing him a breath, a little scene,

To monarchize, be fear'd and kill with looks,

Infusing him with self and vain conceit,

As if this flesh which walls about our life,

Were brass impregnable, and humour'd thus

Comes at the last and with a little pin

Bores through his castle wall, and farewell king!

There’s nothing quite like the feeling of the wind in your hair as you fall from the North Tower of the Castle Anuen.

There’s also nothing quite like the abrupt, sickening thud that inevitably follows.

There had been many assassinations in the history of the Kingdom of Rone, but this one differed from all the others in three important ways. First of all, there had never been an attempt on the King’s life. Previous assassinations had targeted Dukes, Counts, Barons, and the occasional Yodeler, but nobody had ever been so ambitious as to off the King.

Second
, none of the assassinations had been the result of defenestration. This particular detail would make the scholars very happy, since they had been forced to learn the meaning of the word “
defenestration
” but never had an opportunity to use it.

And finally, the motive behind the assassination was unique. In all previous assassinations in the Kingdom, the motive involved moving someone up the line of
succession
. In the case of King Vincent Rone, it was exactly the opposite.

King Vincent was a passable King, but certainly his death would play a bigger part in his legacy than anything he had done in life. Even then, his untimely and unique demise would only amount to a footnote in the history books. Because when the story is all told, it is about another King entirely, and about a sword called the Saintskeep.

But that comes later. To truly understand the scope of this event, we must begin our story three months earlier in the County of Arwall, in the southeast corner of the Kingdom of Rone…