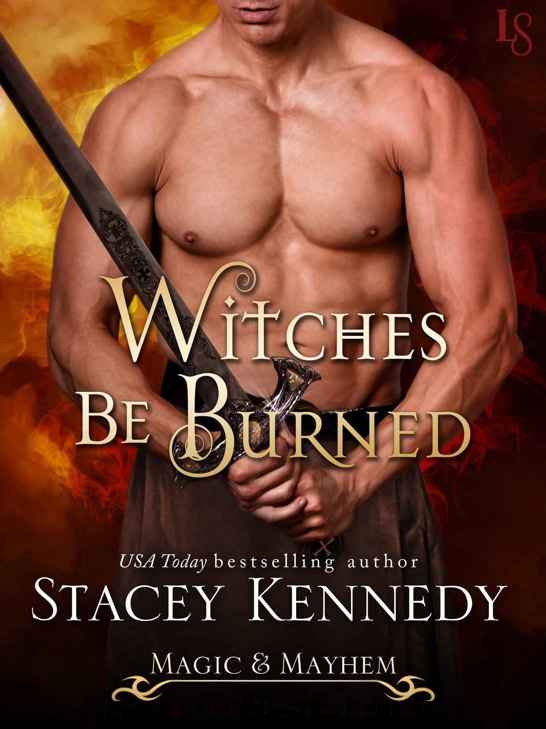 Witches Be Burned
is a work of fiction. Names, places, and incidents either are products of the author’s imagination or are used fictitiously. Any resemblance to actual events, locales, or persons, living or dead, is entirely coincidental.

Published in the United States by Loveswept, an imprint of Random House, a division of Penguin Random House LLC, New York.

L
OVESWEPT
is a registered trademark and the L
OVESWEPT
colophon is a trademark of Penguin Random House LLC.

Character Guide to the Magical World of the Magic & Mayhem Series

Maddox: second in command in the Midwest Territory

Valor: Patriarch of the Wolves; ruler over all of the Alphas in the United States

Briggs: Beta to the Patriarch of Wolves

Magnus: Lord of the Underworld—leader of the dark-realm, home to black-magic witches, warlocks, and demons

Three centuries ago, the Otherworld and the Earthworld formed a truce. The pact was bound by blood and the rules were clear: Otherworldly creatures—guardians and witches—could cohabitate the Earth only if they fought to keep the secret of Earthborn supernaturals—werewolves and vampires—from the human population.

Appointed to see this truce succeed were four supernaturals of each race, henceforth known as the Council. Now the Council holds one purpose: Destroy any supernatural who threatens to expose their existence on Earth.

Cursing the rogue werewolves, who moments ago thought to slaughter him, Elite Guardian Kyden felt his fury rise up within. The half-moon in the dark sky lit his way through the pitch-black backyard in Carson City. Sweat slid down the side of his cheeks as he stalked toward the rogue werewolf trapped in the vortex of Air magic. The mini-tornado, conjured by his lover, the witch and guardian Nexi Jones, whipped around the wolf’s body, caging him. With a determination that was more than duty—this was nothing less than pure revenge—Kyden raised his sword, ignoring the vicious growls from the wolf, and he thrust his blade down into the wolf’s heart.

With a twist, the wolf went quiet.

As he yanked his sword back, a piercing scream cut through the air. “Kyden!”

He spun around and away from the remaining wolves trapped by magic. Nexi lay on the ground, and Zia, the Mistress of Witches, was next to her with a hand on her shoulder. The fright and concern echoing in Nexi’s voice sank deep into his gut. “I’m here,
Álainn,
” he called.

Her eyes met his, her tears brimming, filled with love that stole his breath.
Christ,
her beauty—all curves and long dirty-blond curls, with freckles dusting her nose and hazel eyes that held an old, deep soul—stunned him every damn time.

Kyden sensed an equal reprieve inside him. They were no longer in danger, having been attacked by a pack of rogue werewolves determined to kill them for their leader, Lazarus, a vampire. In Nexi’s anger at the peril they’d faced, she had unknowingly unleashed magic she couldn’t control, causing her to fall into unconsciousness.

Only now, seeing Nexi safe eased the tension coiled tight inside Kyden as he looked over at the crowd standing protectively around her. First he spotted his father, Talon, Master of Guardians, and fellow guardian Finn, killing the remaining wolves in the backyard. Then Kyden’s focus went to his friends: Haven, an Earth Witch on the Council’s Guard, and the Council’s werewolf allies, Valor and Briggs. Gratefulness rushed through him; they had all come to help him and Nexi.

He closed his eyes and exhaled deeply, reeling from the imminent death that had come calling for them. When he again opened his green eyes, he locked on to Nexi’s with deep emotion, perhaps acknowledging the loss of her innocence.

That purpose drew Kyden’s focus on the large tree in the backyard near the door of the white farmhouse. Lazarus’s dark eyes were zeroed in on Nexi. His mouth twisted into a cruel frown, possibly understanding his fate. There would be no escaping his death.

In the same manner that Nexi had secured the werewolves, her Air magic had conjured a smaller windstorm whipping around Lazarus’s tall and lanky body, disabling him from running. With Lazarus contained, Kyden moved to Nexi, needing her close.

As he reached her, raw emotion overwhelmed him. Even though he had known her for three short months, she had become his everything. While their lives were surrounded by death and blood, her affection warmed a part of his heart that had never been touched. He needed
her,
and he had never needed anything or anyone before.

He dropped down to one knee and took her slender face in his hands, brushing his thumbs over her cheeks. Their eyes were for each other, searching for a few long seconds. He wanted her to know that he would only see
her
from this night on. That he now cared solely for her, the guardian witch he loved.

He’d tasted losing her, and that was a fate he couldn’t endure ever again.

It didn’t matter that they weren’t alone; Kyden sealed his mouth over hers without regard, sharing his emotion. Kissing her was perfect, soft, and she was so undeniably
his.
Death nearly stole her away. The panic that had formed in his chest when the werewolves first attacked him and Nexi slowly began to shatter, coldness being replaced by the hot rush of possessive desire to protect her.

He broke the kiss, resting his forehead against hers, feeling the reality of nearly losing her. She had been in danger, and that stirred a burning inside him, making him forget she was a guardian in the Council’s Guard—and that he’d trained her to be the fighter she’d become. He considered her—and now she seemed so fragile, so small, so beautiful. He hadn’t looked at her this way before, having only seen the guardian strength in her and her remarkable power.

Now all he saw was the one thing that could destroy him—facing his life without her. The urge to wrap her in his arms and keep her safe engulfed him, but tonight Nexi needed revenge for the ghastly deaths she sought to avenge. He wouldn’t deny her that right.

After a kiss to her forehead he forced himself to let her go, grabbing her guardian sword with
her name
branded onto the blade—the sword that she’d been gifted when she joined the Council’s Guard. He slowly helped her to her feet and placed the sword in her hands. “Finish it.”

Nexi accepted her sword and rose, smiling at the weight of it in her hand. Then her eyes filled with fire as she turned to Lazarus, stepping away from Kyden. He stayed back, letting Nexi have her moment.

Silence drifted throughout the dark night as she approached Lazarus, who stood by one of the big oak trees. The crowd closed in behind Kyden, but he couldn’t tear his eyes off Nexi. He’d trained her to kill without mercy, to defend innocent human lives from cruel supernaturals who hungered to murder them, though right now he couldn’t have imagined it would have led to anything so personal.

Killing Lazarus wasn’t about keeping the mortal world safe; it was payback for stealing away the humans that Nexi loved and forever changing her life. Yet she stalked Lazarus with no fear, no uncertainty, only conviction.

She stopped in front of the vampire and lowered her sword, the blade digging into the grass. “You know, there’s nothing special about you.” Her voice held no waver, not a single hitch of hesitation. “You’re just a vampire who has done some seriously cruel things. Things you can never be forgiven for.” She hesitated, then added with confidence in her voice, “I thought when I had you here I’d want you to suffer for all the pain you’ve caused me. Now I’m not doing this for me. I’m doing this for all the lives you’ve stolen. My hope is that wherever you go from here, those you’ve wronged will be there waiting for you.”

After she dropped her sword, she lifted her arms, and Kyden heard gasps from behind him as orange and purple flames instantly surrounded her hands. Until now, he’d met only one other witch who could conjure magic without touch, and who could also manipulate more than one element defensively, and that was Zia—, the most powerful witch in existence.

Flames pulsed light blue, heightened by orange swirling lines around Nexi’s hands, lighting up the starry night. But when the magic connected with Lazarus, purple flames erupted over his torso and spiraled around him.

Kyden blinked once, then looked down to the pile of ash at Nexi’s feet that was once a vampire.

“It’s done,” she said softly, and the weight of that statement sounded as if Nexi finally believed the time she’d spent training to fight as a guardian was worth it. That she had finally accepted her new supernatural life, leaving her mortal life behind her. That the long hunt to find out who murdered her family hadn’t been a waste. And more than that, it was as if the promise she had made to her mortal family, to avenge their deaths, echoed across the night sky.