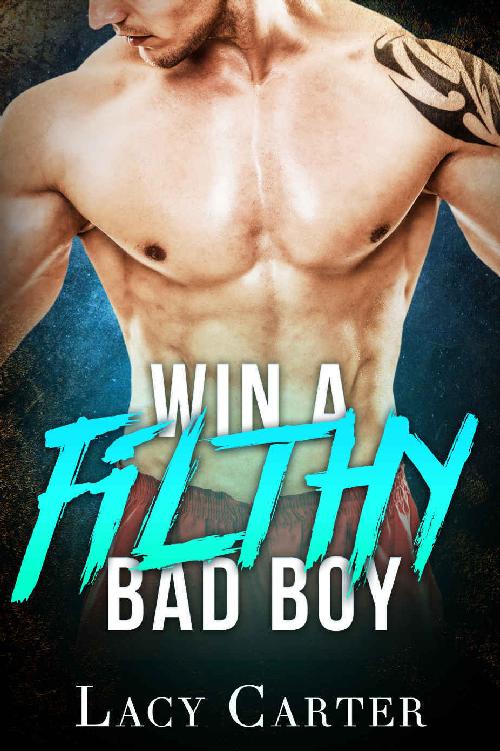 It started as a drunken dare. Jill stood on the barroom stage and danced as two sailors poured beer over her chest. Slightly tipsy, Bonnie brought her focus to the stage and watched her friend in amusement.

It had been a cool day, and slow, round clouds suggested New York was in for rain, but halfway into the night at
Hell Yeah Tavern
, temperatures seemed to reach the mid-nineties. The crowded barroom suddenly felt like a sauna.

The crowd went wild in the large room, the earsplitting sounds of George Thorogood’s
Bad to the Bone
cranked out of the jukebox. Several flat screen TVs fixed on the walls all played muted music videos. People sat at tables, on couches, or leaned lazily against walls. But all eyes were turned on the spectacle at the front of the barroom.

A line of men in sailor outfits stood at the base of the stage and shot broad grins in Bonnie’s direction. Bonnie was seated in the front row, between a thin redhead with coiffed hair, flawless makeup, and who wore an above-the-knee, leopard print, mini dress. On the other side of Bonne was a gorgeous platinum blonde, whose massive hair was cinched on top of her head. She wore a simple black dress that showed off her figure in all the right places.

“Get up here, Bonnie. Let your freaking hair down for a change!” Jill shouted above the blaring rock music. She wore a tight pink stretch shirt and black hot pants.

The platinum blonde stepped up, showing off all her goods, and grabbed a sailor.

The competition went as follows. A female contestant paired with a sailor to perform an outrageous dare—be it a raunchy dance, a beer challenge, or a striptease—then they had to follow through or lose the competition. The most outrageous couple won free drinks all night.

As Bonnie watched Jill twirl between two sailors, she wondered if they were, in fact, male strippers posing as sailors. Regardless, Jill didn’t look concerned as she gyrated her hips, lifted her hands above her head, and shook her breasts.

Bonnie envied her friend’s carefree spirit. A financial analyst, Jill was no stranger to hard work; she clocked close to seventy hours a week in the financial services industry. But the way she reveled in the catcalls and wolf whistles that night at
Hell Yeah Tavern
, Bonnie mused, Jill could've easily been mistaken for a professional dancer.

Bonnie looked up and she smiled, nervously. Jill completely outdid the other contestants. The bar for the most part was packed with the ‘pose and be seen types’, and although Jill dragged her out in hopes that Bonnie might meet a guy, none caught Bonnie's attention.

Regardless, Jill was having a whale of a time. Her vibrant, bouncing energy affected everyone around her. People either admired or envied her and Bonnie understood both sentiments. Jill never cared what people thought. She enjoyed attention, but criticism wasn’t remotely her Achilles’ heel. Jill’s laugh was infectious, and her rosy, apple cheeks always left a lingering smile on Bonnie's face. Blonde and buxom, with glittering blue eyes, Jill was the first to admit her power to attract guys began with her blonde hair.

Unlike her friend, Bonnie shunned attention. This often proved futile given her most distinguishing feature—her large breasts. She stood out even as a seventh grader; by the time she graduated high school, her peers made her feel freakish. She was convinced she was ugly, which meant she shied away from relationships and became overtly self-conscious. Her height and her breasts, especially in comparison to that of her sleek and elegant classmates, meant she never went to school dances.

Bonnie clapped when Jill flashed her bra and sexed it up by jiggling her ass and boobs. She took several steps away from the sailors, spun and pointed at Bonnie. She curled a finger and mouthed
come
up
. Bonnie blushed, her mounting anxieties crawled up to her cheeks. She waved Jill away.

Don't draw attention to me, Jill!

Every eye turned to look at Bonnie. Overcome with the urge to run, she looked the other way. Suddenly, a hand grabbed her arm.

Bonnie looked up. “Jill,” she said. Her friend flashed a broad grin, sweat glistened her face.

“No way, Jill, I'm not going. I can't!” Bonnie’s heart pounded. The truth was she didn’t how to dance, never having so much as swayed to a rhythm at a party. In her twenty-three years on the planet, she never danced in public. However, before she could protest further, she was pulled to the stage.

“Okay, number nine, get up here and give her a dance,” shouted the announcer.

Glancing around, Bonnie saw number nine saunter toward her. The sailor dwarfed her by a good six inches in hefty bulk; he seemed to wear his outfit several sizes too small and he had a big smile on his face.

Never in a million years would Bonnie have mustered up the courage to dance with a stripper/sailor. As it turned out, courage was not needed. He grabbed her, taking hold of her hips and pulling her closer to him. Along with the other contestants, Bonnie and her sailor danced. More accurately, he danced on her, slapped her butt, and tried to grope her breasts.

Bonnie pushed him away. Unfazed, he yanked her towards him. A pushing and pulling contest ensued. The result? An awkward struggle, which didn’t end well. He pulled her to him. She pushed away. He released her and caused her to wobble.

Even though it happened fast, lasting one or two seconds, Bonnie perceived it all in the slowest of slow motions. Her fall backwards seemed to span countless miles and took hours to complete. But when it ended, she found herself flat on her butt with a newfound discovery about gravity. It hurt. Her fall was met by a chorus of laughter, yet undeterred, the sailor displayed a toothy grin and offered her a hand in getting up. She declined.

Feeling stupid, Bonnie got to her feet and made her way toward the exit. Reaching the door, she turned back and scanned the crowd.
Where are you, Jill?
Then Bonnie spotted her kissing a sailor with her legs latched to his waist and fingers tangled in his hair. Jill appeared to be doing fine so Bonnie walked outside for some much needed air.

She was flushed, hot, and glowing from the heat and humiliation. Leaning against a wall, Bonnie stared up at the night sky. The Manhattan nightlife was vibrant and thriving. It was also hot and crowded. She and Jill only had to walk a few blocks to be immersed in the sights, sounds, and smells of the buzzing club scene. However, Bonnie hadn't been out for a good time in a long while. She had recently broken up with her possessive boyfriend, Henry, who thought a hostage situation made for the perfect relationship. Regardless, Bonnie stuck with him, believing him to be the one.

She wanted to find love so badly, she put up with Henry’s possessive and paranoid behavior. She never felt the need to go wild, have fun, or go on nights out; she was in a relationship, albeit a relationship where she was a maid more than a lover, but a relationship nonetheless. Bonnie thought she was willing to settle. Stability was important. Or so she believed, until she discovered Henry had cheated on her with her friend, Anya. It left her devastated.

Bonnie shoved the memory from her mind. Remembering the pain was one thing. But swimming too long in the past would eventually mean swimming into powerful currents that would pull her towards danger.

Staring into the bar, she wondered who she was kidding; she wasn’t going to meet the right guy on her first night out. The best-case scenario would’ve been to meet a nice guy who chatted with her a bit, and was fairly good-looking. Even better, the nice guy might be the one to ask for her number, and would perhaps arrange a date. But neither of those scenarios included what happened next.

Bonnie was about to step back into the bar, when hot breath brushed along her neck and made her shiver. Someone stood at her back.

She turned and tilted her head, and found that a tall man stared down at her. He was breathtaking.

His gray eyes never wavered at all. His chestnut brown hair, chiseled features, and smooth lips captivated her totally.

“Oh my,” gasped Bonnie. They were the only words capable of leaving her mouth.

Without hesitation, his hand found the small of her back and took hold of it as if it were his right.

Bonnie lost her ability to struggle; he was simply too stunning to resist. His toned body inched dangerously close and sent her lust into overdrive. Her eyes traced his unbuttoned shirt down to his athletic torso. She quickly lowered her gaze, only to catch sight of his well-formed V, which peeked out of his low-rise jeans.

He pushed a strand of hair from her face. “How about you come back to my place?”

She reclaimed the piece of hair and slipped it behind her ear, a nervous gesture she hoped he interpreted as being cool. But the reality was that she found herself unable to cope with the dazzlingly gorgeous guy looming over her. His deep rumbling voice had a hint of an accent.

“My boyfriend is waiting for me inside. He's on his phone,” she lied. Her intuition told her that he was dangerous. Fighting the urge to flee, she thought a white lie would work. She was wrong.

“Funny. I wonder what your boyfriend thought about you shaking your perky ass up there on stage?” he asked, flashing a set of deep-set dimples. “I don't know what sort of man would leave you out here all alone. All vulnerable.” He lowered his hand down to her ass.

Her heart jumped into her throat. “He doesn't mind…” she said. The little white lie was become a big one.

“If you were mine, I wouldn't share you with anyone,” he said.

It had been so long since a guy paid her any attention; Henry kept her sequestered indoors for the most part. If she wasn't at work, she was at his apartment, preparing his meals, or food shopping after cleaning his apartment. Now she stood in front a guy who was obviously a rare breed, overwhelmingly hot, a strong jaw, razor-sharp cheekbones and evidently not averse to a plus-sized women who looked a hot mess. Disbelief—that was the best word to describe how she felt. The way he looked, he could have had any woman in the place.

“I'm sorry,” she said. “I have to go.” It took a titanic effort to pull herself free of his grasp. She ran back into the bar, scanned the crowd but, to her dismay, Jill was nowhere in sight.