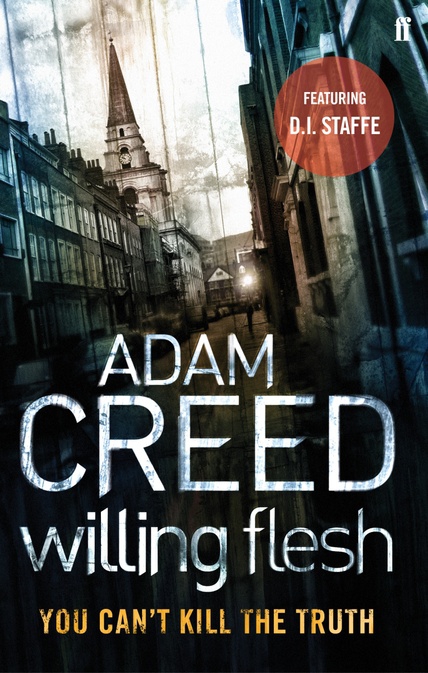 For Haydn and Susan

Elena Danya steps from the roll-top bath, her back straight and toes pointed down, as if she is doing dressage. She drips water all across her polished limestone floor. Foam sticks to her body and makes her modest. She rubs a porthole in the misted mirror and regards herself in the low, flickering candle glow. The bath, over her shoulder, looks the part and she recalls her expectations of England. When she left home, two long years ago, her mother had pinched her cheek, assured her she would make something of herself, for the family; find a prince. Elena smiles. It is coming to fruition.

What she sees now, in the mirror, is the way she likes herself: pink-skinned and with pale eyes; her hair straight in dripping tails, the palest outline of the flesh of her lips. Every last trace of her make-up is washed away. It is how God made her.

And she can be this self, again, for two whole days. She will read her novel this morning, doing a few jobs around the place between chapters, then catch the afternoon train up to the coast. It will be dark by the time she checks into the Signet Hotel and she will sit on the window seat of the bay window in her room, draw up her knees and watch the lights glimmer out at sea, then eat alone in the splendidly faded, panelled dining room – fond smiles from her fellow residents. They may think it strange that such a wholesome girl is eating alone. They may speculate at what she is running from, or towards. Some staff may recognise her, recalling her in the company of a man, or two.

Tomorrow, she will walk on the sands in a late winter dawn, way past the pier with its shiplap huts. Then Elena will take a full breakfast, and return to her seat to finish her book. She will take another, longer walk to the harbour at Warblingsea before the latest lunch she can muster because she knows that when she returns to her room and the sun sets, wintry early, she will ease herself between the sheets and she will look east across the North Sea and she will cry. Next day, on the very first train back to Liverpool Street, normal service will resume. But not for long. She is changing.

She thanks the stars that she gets such days to herself. She is lucky; other girls work seven days or seven nights and sometimes both.

Elena pads through to her bedroom and drags the sheets from the bed. Still naked, she carries the load to her kitchen and crams the linen into the washing machine and double-doses the fabric softener, sets the machine to a boil cycle.

The telephone rings, fracturing the normal, domestic ritual. She answers, sitting cross-legged on the chilled tiled floor. Rebeccah’s voice is warm. She sounds like a child, can look like a child if she wishes; if somebody else wishes. Rebeccah is not so lucky as Elena. She has a different appeal.

‘I don’t want anything to happen to you.’

‘It is only the seaside,’ says Elena.

‘We don’t
have
to do anything, you know. I’ve got my Frank.’

But the phone cracks, dies, quick as a broken bone.

Elena takes a carton of apple juice back through to the bedroom. Apple juice is good for the stomach. She has problems with her stomach. She plumps up the bare pillows and leans back with
Mansfield Park
, draws up her knees. A part of her hates this room. The sounds and shapes she has made, right here, never quite fade to nothing.

By the end of the first paragraph on the downturned page, Elena has caught up with where she left off and she feels her mouth turn up at the edges, into a smile. Then the phone rings again. She considers ignoring it, but it might be her mother. She pictures her mother, wrapped in many coats and a thick woollen scarf around her head, in the phone box at the bottom of the block of flats, bitter winds whipping up off the snowy river.

‘My love,’ says the man. It is Markary. His voice is light, but guarded, suggesting someone is with him. This makes her heart heavy.

‘You call to wish me a happy trip? I don’t think so. You promised me two days.’

‘This will be good for us. Good for everybody!’ He laughs. But he is sad, really. She knows the real him. There is definitely somebody with him.

‘It could be good for another girl.’

‘There’s only you, Lena. You know that. You’re different.’

‘I won’t do it,’ she says, holding herself tight around the knees. Something in her stomach twists and she feels her voice crack.

‘Make yourself white, my love. Be gentle. He’s a shy one. You’re perfect for him.’ He lowers his voice and sounds absolutely sincere when he says, soft as powder, ‘I love you.’

Elena knows better than to tell Markary he couldn’t possibly love her; instead says, ‘You should love me more.’

She picks up
Mansfield Park
and throws it at the wall. It could tell hundreds of variations of a single tale.

Staffe knows his limit and he watches, unmoving, as the bids for the Crimean shaving stand climb higher and higher. He won’t pay more than a month’s take-home for any lot, ever. He could, but it would be wrong.

‘Two thousand eight hundred,’ says the auctioneer. He looks towards Staffe, even though he hasn’t bid yet, because he knows him of old, and they talked about the stand on the phone only yesterday.

Staffe makes the faintest shake of the head, puts the catalogue behind his back and moves back through the crowd, checks his watch. He has seen an intaglio ring, from the Urals. It is of Russian gold and has an emerald, the colour of Sylvie’s eyes. It is most definitely not what he came for, but, as the gavel comes down on the shaving stand, he trusts the instinct that he must have it. His watch says a quarter to twelve and he should be with Sylvie, at the Eagle and Child, by noon. She’ll understand, he assures himself; especially when she sees what kept him.

An eager brace of couples push past him from the back of the room and the bidding for the Urals ring starts at
£
1,200. It’s worth
£
3,000, any day of the week, but as the battle reduces to the eager couples – at
£
2,000, and rising in measly fifties, Staffe raises his hand, says, loud and forceful, ‘Two and a half.’

A most English gasp whispers around the medieval hall and the auctioneer can’t help but smile. He pauses, for effect. ‘Does anybody care for this more than Mr Wagstaffe?’

It is Staffe’s one and only bid. He knows it would have crept up towards and beyond his limit, but his bid asserts that he may well go far higher. That is a lie. He closes his eyes and wishes the round thud of the gavel. He holds his breath, pictures Sylvie’s face as he proffers the box.

The silence in the room deepens and Staffe can hear the hurried confidences of the two bidding couples. He opens his eyes and they each turn, look at him. The gavel thuds and Staffe goes straight to the cashier, unable to look the outbid lovers in the eye.

He drives on the limit all the way from Chipping Norton back to Oxford and shows his City of London warrant card to the man parading the pay and display at Martyrs Memorial, gets a nod of reverence in return.

They are here because Sylvie says it’s a part of him she doesn’t understand. She thinks it madder than a trunkful of frogs that he shies away from his alma mater, but to be safe, he brought her this side of town, staying at the Randolph rather than near his college, Merton – the other end of Cornmarket and beyond.

Sylvie has gone from the pub, according to the American twelve-year-old managing the place, so Staffe ambles down past the Memorial, where the Protestants Cranmer, Ridley and Latimer yielded their bodies to be burned, at the behest of Mary Tudor and the Church of Rome.

Opposite the Randolph, he sees her, in the window of the dining room, laughing with a floppy-haired, chisel-jawed man her own age. He looks a million pounds in a battered tweed jacket. It must be Ollie. They were at Goldsmiths together. Staffe waits on the corner, by the Ashmolean, hoping she will see him and come out.

Even though he is hopelessly late, she isn’t looking up; is too engrossed. He calls the station. Is he already missing the city’s fast beat?

‘You’re away for the weekend, sir,’ says his DS: Pulford. ‘Rimmer’s looking after things, sir.’

‘You just call me, right – if anything serious happens.’ Rimmer isn’t Staffe’s idea of a detective inspector. Poor bugger. Rimmer probably isn’t even Rimmer’s idea of a DI. But it’s in his blood.

‘But I’m out on a new surveillance, sir.’

‘A couple of new labour gangs, maybe illegal. And you said I wasn’t to disturb you. Under any circumstances. You said …’

Staffe turns off his phone, looks back up at the Randolph. He puts his hand in his pocket and takes out the intaglio ring, holds it up to the light. Tonight, he is taking Sylvie out to Great Milton, to Le Manoir for dinner, and he will play things by ear but, if all goes to plan – he will give her the ring.

Sylvie waves at him from the hotel entrance, laughing. Her hair billows in the wind and she holds it to one side as she kisses the handsome young man on the cheek; then the other. He holds her by the hips as they do it. When he walks away, he studiously avoids looking toward Staffe, as if it had been determined it would be better if he wasn’t introduced.