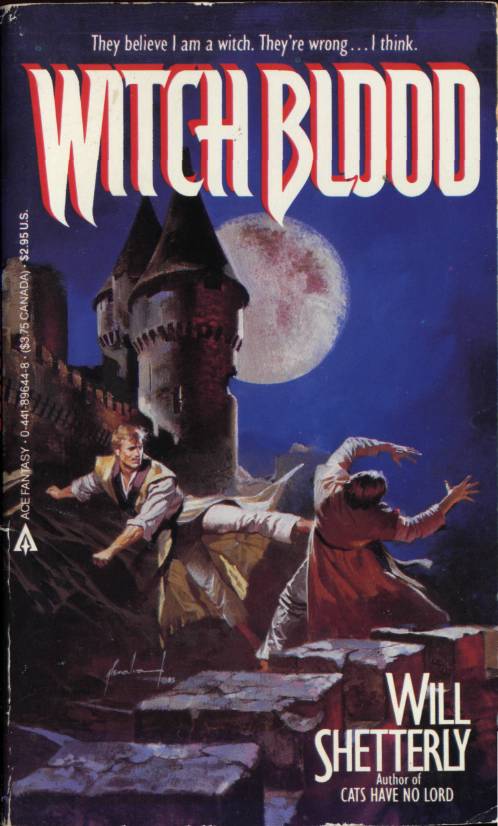 The witch snapped his fingers, and the curtains at one end of the room drew themselves back. A man and a woman, dressed all in black, were tied on the floor in the far alcove.

“Visitors,” said Talivane with theatrical pleasure. “From the Duke.”

Naiji said coldly, “He hires Spirits, now. What next?”

Her brother shrugged and quoted, “
All’s fair in war with witches
.”

The prisoners’ clothing was that of Moon Isle’s assassins, who call themselves by many names: the Spirits of Death, the Spirits of Freedom. ... If, as it is said, the Spirits began as a force to overthrow the Witches’ Empire thirteen hundred years ago, it was logical that they should be employed by Castle Gromandiel’s foe. I hoped Duke Komaki had only hired a few, that there was no pact between him and the Spirits’ entire clan. If such a pact existed, we might as well slay ourselves now and save the Duke the trouble....

Ace Fantasy books by Will Shetterly

CATS HAVE NO LORD

This book is an Ace Fantasy original edition, and has never been previously published.

An Ace Fantasy Book/published by arrangement with the author and the author’s agent, Valerie Smith

This book may not be reproduced in whole or in part, by mimeograph or any other means, without permission. For information address: The Berkley Publishing Group, 200 Madison Avenue, New York, New York 10016.

PRINTED IN THE UNITED STATES OF AMERICA

This book is for Emma Bull, my wife and my love

I WOKE EARLY
this morning. The winter sun had yet to rise from the sea, though I heard gulls chiding her to hurry. A bowl of cinnamon and dried bay leaves sat near my pallet, and their scent was thick in the closed sleeping room. I lay beneath the soft cotton quilt that my second wife had made for our wedding bed. I closed my eyes and tried to sleep again, but I could not. I remembered the people and events of my life.

When I was a boy in the western fishing village of Loh, which means
more than two homes
in that language, I was chosen by a wandering priest of the White Mountain School of the Warrior-Saint to master her Art. Only one part of the Art will I claim to have learned well, and that is the art of memory. Sometimes I think it is my curse, and sometimes, my blessing. This morning it was both. Enemies and friends, some lost to death and some to time, came before me to say, “Rifkin. In our way, we touched. It is important. Never forget.”