while the black stars burn 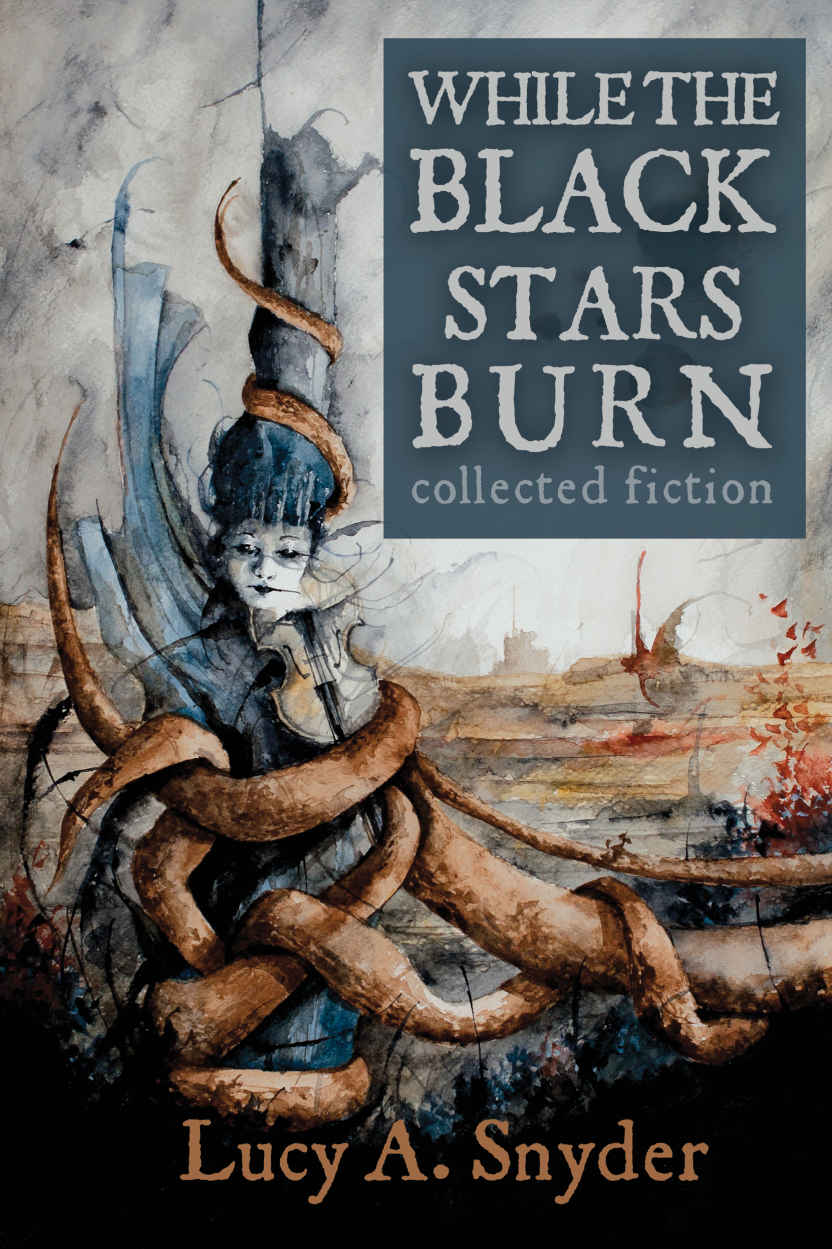 W
HILE THE
B
LACK
S
TARS
B
URN

W
HILE THE
B
LACK
S
TARS
B
URN

The Strange Architecture of the Heart

The Still-Life Drama of Passing Cars

While the Black Stars Burn

The Girl With the Star-Stained Soul

My bones dragging like lead rods, I trail after my girlfriend on her quest for yarn in some huge, fluorescent craft barn. The lights are buzzing brain bleach. I spy with my bloodshot eye modeling clays in kid-friendly buckets, bright packs of rainbow logs. I want them desperately. I want to grab a pack and run off to some dark, quiet room and feel the cool, greasy clay squish and roll beneath my fingers. But even the cheapest, tiniest pack is $10 and my car needs gas and my husband’s surgery is coming up and there’s no room in our little house to build anything. I pass on by.

In my girlfriend’s car, I close my eyes in the summer heat and remember the smell of the clay as I worked at my craft on a card table in the back bedroom of my father’s house. The walls seemed to hold their breath before the air conditioner thumped on. In that dusty, silent room of a ranch house surrounded by ancient neighbors who weren’t anyone’s grandparents, I used to build my friends: dragons and squires and heroines, but mostly monsters.

My mother started me on monster making. When I was little I had vivid dreams, sometimes terrifying ones, and I told her about the scary creatures who came to me at night.

“When you see them, just make friends with them,” she said cheerfully. “Then you’ll see they’re not so bad.”

My mother was a lucid dreamer, and when I was older I realized she was encouraging me to take control of my nightmares. But I was never any good at that, not even as an adult, and when I was five I didn’t understand. How would I know when I’d see them again? How could I possibly wait for that? So I recreated the monsters in clay to make them fight each other and not chase me through the woods or through strange houses with endless corridors.

I made my own Godzilla in gray and green clay and a muscular Wolf Man in brown. There was blue, eight-armed Tentacles (pronounced like Hercules), whom I started dreaming about after I glimpsed the giant squid scene in
20,000 Leagues Under the Sea
on TV
.
And there was Eyeblob, a formless mass of eyeballs that had chased me ‘round and ‘round in my dreams ever since I could remember. Playing with my creations didn’t stop the rare nightmares, but it didn’t make them worse, either, and after all there wasn’t anybody else to play with.

One evening, my parents forgot why they’d told me to keep the clay in the back room and they let me bring my creations out to play on the coffee table while they watched television. My friends menaced one another in the flickering blue light. Afterward, it was time for bed. I put my monsters away and soon I was soundly out in the kind of sleep only a kid can have.

Suddenly my father burst into my bedroom, shouting about the coffee table. The clay left smudges on the glass! He dragged me into the living room. Disoriented, terrified, I was sobbing, pleading. He threw a napkin at me and made me scrub at the stubborn smudges with a shivering hand. I couldn’t keep the snot and tears from dripping off my nose onto the table and that made him angrier, louder. My mom hovered nearby, quietly asking him to stop. Not intervening. She didn’t tuck me in afterward. For a long time, I thought she’d done all she could to stop him.

Thirty-seven years later, I tell a perfect stranger in a therapy room that, if it had been me, I wouldn’t have just stood by making helpless mouth noises while my bad marital choice did that to my kid. The moment he headed to the bedroom, I’d have told the fucker that the Windex was under the sink if the smudges were such a catastrophe. And if he’d opened that door and said anything more than “I love you” he would have spent the night outside with the bats.

The perfect stranger asks me how my relationship with my father is. We aren’t friends. He asks how my sleep is. It’s shit.

Every night I wake up in a panic, thinking I have forgotten something critical and now a man is coming into my room to punish me. Kill me.
Every. Fucking. Night.
Sometimes six or seven times a night. And when I’m awake, I feel as though I’m always holding my breath, waiting for the thump.

The perfect stranger tells me I have PTSD. He says that pills—which I never asked for anyhow because I hate how they smear my brain—won’t help. I need complex, long-term therapies to repair my broken sleep, and my insurance mostly won’t cover it. The bills would be a devouring beast.

My girlfriend drives me home. I roll the letters around in my head. PTSD. From that? One harsh wakeup in a silent house?
Seriously
?

But it wasn’t just that. The kind of guy who would roust his kid screaming over a few clay smudges wouldn’t do only that. His violence was rare, but memorable, the work of some great anti-artist slowly building me up only to tear me back down. I marvel again that my mother stayed with him the decade it took for me to be conceived, and I also want to weep because she stuck with him ‘til her death, thirty-five years more.

Girlfriend drops me at the curb and I go inside, quiet so I don’t wake my husband from his nap upstairs. Our coffee table is scarred wood, piled with prescriptions and junk. I climb the stairs, take off my clothes and slip into the sheets, my body spooning against my husband’s perfectly. He shifts, murmurs, starts to snore again. I don’t sleep. I think of the deplorable clutter on the coffee table, and our bills, and wish I’d bought a bucket of clay anyhow.

Finally I get up and go to my computer in our back bedroom. There are smudges on the monitor screen. I don’t wipe them off. I take a deep breath, and start to write about dragons and squires and heroines, but mostly monsters.

Adira held the cabbage-sized, iridescent amber egg close to her chest while Mama Silklegs twitched and curled on the hay-stuffed mattress. The gentle old spinweb was wheezing in obvious agony, the lids over her four eyes swollen. Mama curled her eight legs under her in a strange way; the tears blurring Adira’s eyes made the old spinweb look like a massive copper daisy sagging on her parents’ bed. A sour odor like spoiled chicken broth hung in the air.

Solemn, her father dripped milky poppy tonic from a goatskin into Mama’s round, toothy mouth. He’d given Adira’s grandmama the same tonic when her belly swelled as if she were with child but no child ever came. Her grandmama said the tonic took away the pain in her bones and helped her sleep. Adira hoped it would help Mama, too.

She wanted so badly to be strong like her parents told her, but Adira couldn’t stop the tears burning in her eyes. Even replaying within her mind the ridiculous songs her Aunt Ruthie taught her didn’t help. Her brother Moshe and sister Dalia were weeping openly, clutching their eggs like they used to hold tight to their baby blankets during thunderstorms.

“Don’t squeeze them so! Just keep them warm!” Gray-faced, her mother wiped her own eyes on her apron. Her own health failed when Mama got sick; their father said it was from worry but Adira knew it was more than that. Just a year ago her mother had been a big, hearty woman who could heft 60-pound rolls of silk damask over her head into the merchant’s wagon. While her will remained strong, her body was frighteningly thin. Adira feared that a strong winter wind might blow their mother away.

She put a shaky hand on Adira’s shoulder. “It is the way of things. Having babies is hard on her, just like it is for us.”

The girl silently vowed to never have a baby. “I don’t want her to die.”

“None of us do, my little mouse. She is a queen amongst the spinwebs; she has lived a long and wonderful life and provided for five generations of our family. There will be none like her again, but she has left us three beautiful eggs, and she trusts us to raise her babies. None could hope for so great an honor as this.”

Moshe sniffled. “Not even Prince Helmut?”

Mother snorted. “Certainly not he.”

Their father emitted a strangled noise somewhere between a nervous laugh and a muffled yelp. “Darling! Do not tell the children such things; they might repeat them outside, and then what would happen?”

Muscles bunched at her mother’s gaunt jaw. “I forgot myself. Children, as your father says: say nothing of Prince Helmut’s greed and villainy.”

Mama Silklegs emitted a sudden pained shriek and thrashed on the bed, and in almost the same moment their mother clutched at her chest and fell to her knees, her face contorted in pain.

Adira sat watch over her mother while her father and the weavers and dyers dug a grave for Mama in the family graveyard. The girl’s stomach ached with fear. Her mother fainted when Mama died, and none could wake her. Mama had to be buried before sunset, and digging such a massive grave took almost all the able-bodied people on the magnanery. So her father put her mother in Adira’s bed and told the girl to fetch him if her condition worsened.

She hugged the egg in her lap. The iridescent shell was hard like oil-boiled leather, but she could feel the baby spinweb moving inside, stretching the walls. It would hatch soon. She knew she had to take the best possible care of the egg, not just out of respect for Mama but also because the only spinweb who remained, Auntie Goldbelly, produced barely a quarter of what Mama had before her egg sickness. They grew plenty of vegetables and raised goats, but if they didn’t sell enough silk, they wouldn’t be able to pay Prince Helmut’s new tax. The dairy farmer next door hadn’t been able to pay after his cows poisoned themselves on ragwort, and soon the prince’s guard came with crossbows and swords and seized the farm. Adira’s father sheltered the evicted farmer and his family for a few months, but they left to seek a better fortune in Esterland, whose queen was said to treat her subjects fairly.

No Other Love by Candace Camp
Master of the Opera, Act 4: Dark Interlude by Jeffe Kennedy
To Catch A Cupid: Thomas (MacKenzie Family) by Hart, Liliana
Crystal Dragon by Sharon Lee, Steve Miller
After Rain by William Trevor
Vulcan's Fury: The Dark Lands by Michael R. Hicks
The Battle Sylph by L. J. McDonald
A Kind of Romance by Lane Hayes
The Kingdom Where Nobody Dies by Kathleen Hills
Mayne Attraction: In The Spotlight by Ann Mauren