Read When the Glitter Fades (Cowboys of Whispering Winds) Online

When the Glitter Fades (Cowboys of Whispering Winds) 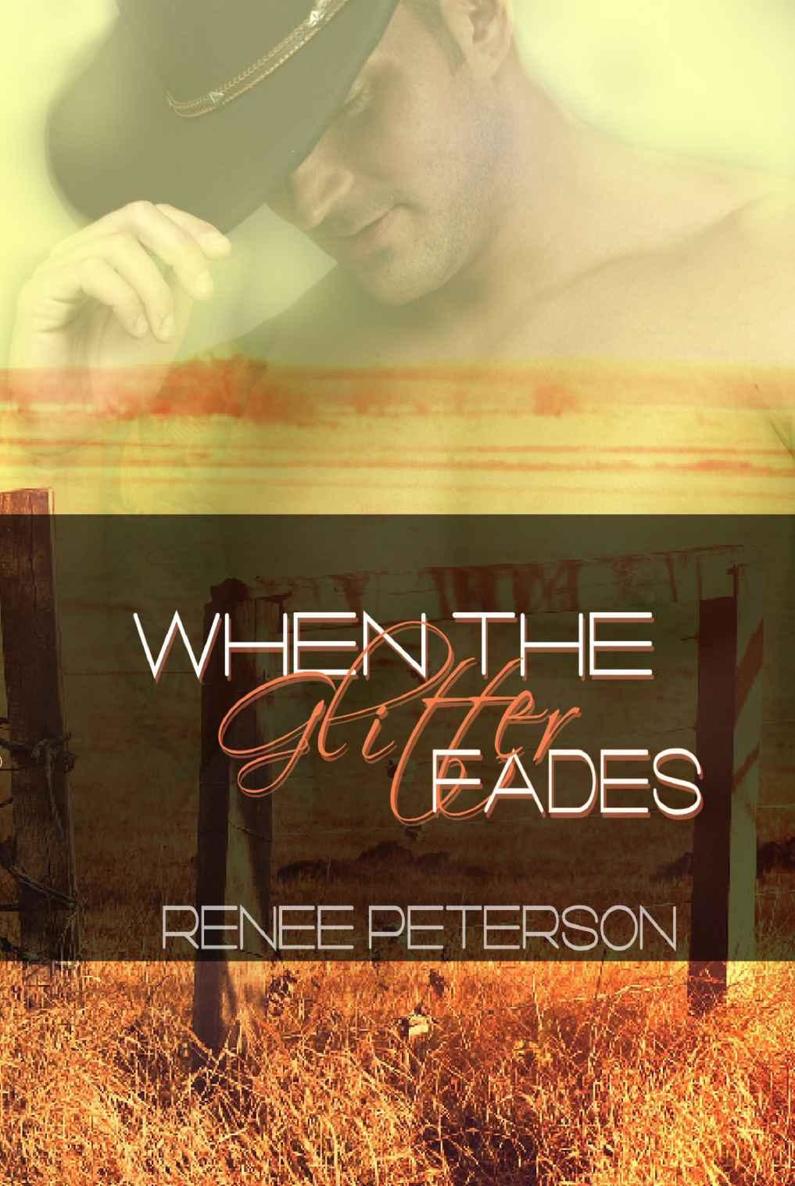 When the Glitter Fades

This book is a work of fiction. Any similarities to real people, living or dead are purely coincidental. All characters and events in this work are figments of the author’s imagination. 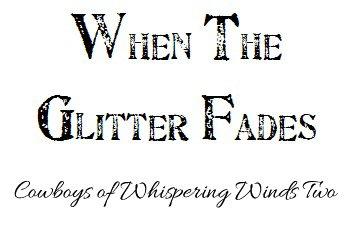 Lanie sank down on the plush leather chair, refusing to shed another tear over her cheating husband. All her dreams of happily ever after, destroyed in a blaze of lies, betrayal and infidelity. Maybe the signs had been there all along. Maybe she’d blissfully ignored them in hopes he’d straighten his path. Whatever the case, her marriage was over.  The divorce was final and she was a single mom.

Cody was with her parents back at Whispering Winds while she packed up the items she would be taking with her. There wasn’t much beyond her clothes and a few personal items. Jeremy had offered the house to her, but the memories were too painful. This was their house, not hers. They’d spent hours poring over floor plans, trims, and color schemes. No, she couldn’t remain living in this house without Jeremy. It was intrinsically and irrevocably a symbol of their promise of forever. Too bad Jeremy hadn’t understood the meaning of forever, and ‘til death do us part. Or, maybe, he just hadn’t cared that he’d made that promise.

Standing up, she walked to the kitchen and grabbed her purse from the granite countertop; along with a stack of her mail that had accumulated. The over-sized, eight-foot tall front door opened and Lanie bit the inside of her lip. Jeremy wasn’t due back for another hour and she didn’t have the strength to see him right now. The hair on her neck bristled. Seeing him in a neutral environment, the sterile courthouse room where they’d met with a mediator to define the terms of their dissolution, had been difficult enough. Facing him here, in the intimacy of the home they’d shared, would be nearly impossible.

“I, um, thought you’d be gone by now,” Jeremy muttered.

“Almost. I was just on my way out.” She held up her keys, as though she needed to prove her intentions. “My house key is on the counter.”

“You can keep your key.”

She left it sitting on the counter.

They stood there awkwardly: two lovers turned foes. People always say there’s a thin line between love and hate, but she’d never understood how they could be so wholly entwined until now. Staring at Jeremy, her heart still fluttered when she saw him; the way his shoulders were always casually relaxed in a confident stance, the cocoa strands of hair that always fell into his eyes when he put off getting a haircut, the low slung jeans, held up by his hand tooled leather belt and championship buckle. She loved him. As badly as it hurt, she still loved him.

And then there was hate. The blinding fury when she’d first discovered he was cheating. The humiliation when she found out most of their friends on the circuit knew long before she ever did. How she hated him for tearing apart her dreams of a family, for betraying her in the worst way a husband can, the callousness with which he’d treated her and their son.

Yet, she loved him because of their son. Cody was the greatest gift he’d given to her, albeit one he’d not been thrilled about having. She, however, refused to regret Cody for a second. Her pregnancy had been an unplanned surprise, but he was her world, the love of her life. If she had to raise him without a father in his life, then so be it. The divorce settlement gave her full custody, but allowed Jeremy unlimited visitation rights, an allowance placed on the chance he decided to step up and be the dad Cody deserved. Strange how outlining the terms of their divorce had been so clean when the end of their marriage had been played out in such a public mess.

Blinking furiously to keep the tears at bay, she knew seeing him here would be her undoing. She could do this. She had to be strong.

“I leave for Denver on Wednesday. When I come home, maybe we can set something up with Cody?” His voice cracked, betraying his cool demeanor.

“Yeah, sure. Just give me a call and we’ll figure it out.” She had to leave, get out of the house before she suffocated from the pieces of her broken heart jamming into her lungs. “I…I need to get going.  Cody won’t go to sleep until I tell him goodnight.”

Such a trivial phrase to mark the end of their relationship, but what was left for him to say she wondered. What else could she say? How do you say goodbye to your best friend? Your lover? The one who betrayed you and slept around on you.

He stepped aside, clearing a path to the door.

Breaking the gaze they’d been holding, she kept her focus on the exit and getting away. One foot in front of the other, one step at a time. In slow motion, she crossed the room, knowing she was leaving a piece of her heart behind.

As she approached the door, Jeremy reached out, encircling her wrist with his hand. If she hadn’t seen him blink away his own tear, the man who hadn’t shed a single tear when his mother passed, she would have pulled away; but she allowed herself this final moment.  His arms went around her waist, pulling her to him. Her arms slid around his neck, inhaling the leathery scent attached to him. Leaning forward, he tipped his forehead against hers. Words that couldn’t be spoken passed between them. Saying them out loud would only make them sound trite. Her heart beat erratically, and she hated that his arms still felt like home even after all he’d done.

In a moment she’d certainly regret later, she moved her head, allowing her lips to graze against his. There, they lingered for a final taste, a hint of whiskey on his breath. Abruptly, she broke away and walked to the truck, not looking back.

She’d said goodbye to the life she knew. 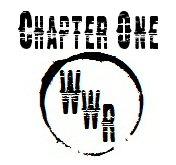 “I’m ready, mom.” Five year old Cody Travers walked into his mother’s bedroom, a superhero backpack hanging precariously from one shoulder. “I did everything you said.”

“Are you excited for your first day of kindergarten?” Lanie felt teary-eyed that her baby was going off to school, never mind that he’d attended full day pre-k last year.

Cody shrugged, sending the backpack to the floor. Automatically, Lanie reached down to pick it up, wrapping her fingers around the canvas loop at the top. She ruffled his sandy blonde locks, wishing she could pause time, even temporarily. He was growing up too fast; wasn’t it just yesterday he took his first steps?

“Let’s go,” she told him. There was no time for nostalgia if they wanted to arrive at the bus stop on time. They went outside and Lanie buckled her son into his booster seat before making the drive to the front of Whispering Winds property, where the bus would pick up Cody. Once the big yellow mammoth of a vehicle came into view, she took Cody from his seat and gave him a hug before the bus got too close. Yesterday, he’d told her not to hug him in front of other kids. She’d hoped to have another few years before they reached that point.

“Love you, mommy,” he said, then ran down a few feet to where the bus would pull over and stop.

She watched him bend over, pick something up from a pile of dirt and examine it up closely. It wiggled. Ick, it was a worm, or at least that’s what it looked like from her vantage point. The simple action made her smile. Cody might be growing up, but he was still a little boy at heart.

Once he was safely on the bus, she hopped back in the car and drove back to the lodge, ready to work. Every Monday morning the entire Whispering Winds staff gathered for a weekly meeting to discuss the upcoming week.  An upbeat song blared from her phone as she pulled into her usual parking spot. Switching off the ignition, she looked down to see the called id on her screen- Clayton Holmes, her boyfriend. She swiped the screen to answer the call and put the phone to her ear.

Afterlife by Colin Wilson
Crawl by Edward Lorn
The Seduction of Shiva: Tales of Life and Love by Haskar, A.N.D.
The Age Of Reason by Paine, Thomas
Expecting the Playboy's Baby by Sam Crescent
Ivy and Bean No News Is Good News by Sophie Blackall
Devoted to Him by Cheryl Dragon
On Immunity : An Inoculation (9781555973278) by Biss, Eula
With These Four Rings - Book Five: Wedding Bonus (Billionaire Brides of Granite Falls 5) by Ana E Ross
The Clash of Civilizations and the Remaking of World Order by Samuel P. Huntington