Whatever Happenened to Molly Bloom? 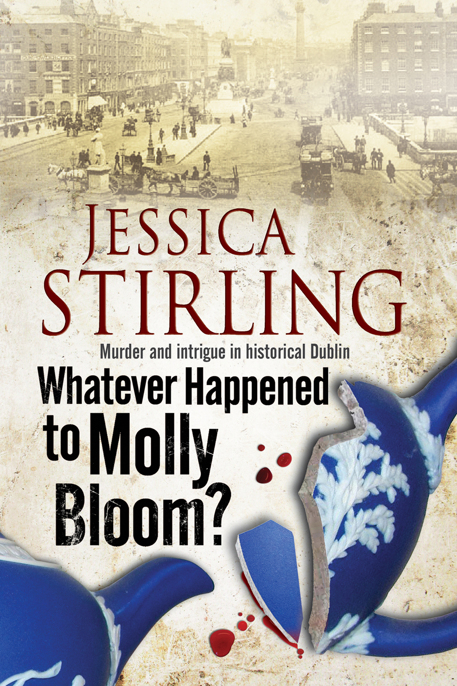 A Selection of Recent Titles by Jessica Stirling

Part One: The Detective

A selection of recent titles by Jessica Stirling

THE FIELDS OF FORTUNE

A KISS AND A PROMISE

A CORNER OF THE HEART

WHATEVER HAPPENED TO MOLLY BLOOM?*

WHATEVER HAPPENED TO MOLLY BLOOM?

This ebook is copyright material and must not be copied, reproduced, transferred, distributed, leased, licensed or publicly performed or used in any way except as specifically permitted in writing by the publishers, as allowed under the terms and conditions under which it was purchased or as strictly permitted by applicable copyright law. Any unauthorised distribution or use of this text may be a direct infringement of the author’s and publisher’s rights and those responsible may be liable in law accordingly.

First published in Great Britain and the USA 2014 by

The right of Hugh Rae to be identified as the author of this work has been asserted in accordance with the Copyright, Designs & Patents Act 1988.

Whatever happened to Molly Bloom?.

Except where actual historical events and characters are being described for the storyline of this novel, all situations in this publication are fictitious and any resemblance to living persons is purely coincidental.

This ebook produced by

T
he bell of St George’s tolled the hour of nine as Detective Inspector Jim Kinsella of the Dublin Metropolitan Police dropped from the tram and headed up into Eccles Street.

It was a brisk, bright March morning with more than a hint of spring in the air and the city was lifting its head again after a dreary, rain-washed winter. Kinsella was glad to be out of the office, though why Store Street had requested assistance from G Division for what appeared to be an obvious case of domestic violence was puzzling.

On the steps of Number 7, a young constable in patrol uniform stood guard on the door. Tall, broad shouldered and fresh faced, a typical product of the Kevin Street Training Depot, he came to attention when he caught sight of the inspector. He did not, however, salute. Even here in the quiet backwaters of C Division the rank and file were still leery of drawing attention to a plainclothes detective who might be a target for nationalist desperadoes. A street whose lower reaches boasted only plain three-storey brown brick houses numbed by their own ordinariness was hardly likely to harbour a nest of volatile republicans but the inspector did not chide the young man for his caution.

‘Mr Machin, sir, he’s waiting for you inside.’

A Wexford accent, Kinsella thought, probably a farmer’s son.He said, ‘How long have you been here, Constable?’

‘Has the coroner arrived yet?’

‘Who was first on the scene?’

‘It was me. I mean, I was.’ The constable extracted a notebook from the side pocket of his tunic and read from it. ‘At ten minutes to eight o’clock, nearing the end of my duty, I was approaching the corner of Lower Dorset Street from the north when a disturbance occurred in Eccles Street.’

‘What sort of disturbance?’

‘Shouting, a man shouting,’ the constable answered. ‘It was very loud and sounded … I don’t have the word, sir.’

‘I proceeded to the scene and found a man standing on the step of Number 7 Eccles Street, shouting at the top of his voice.’

‘Could you make out what he was saying?’

‘How was he dressed?’

‘Did he have his boots on?’

On the step of the house next door a man hovered, half in and half out of the doorway. Behind him, hugging his back, was a boy of ten or eleven. Other doors were open too and curtains twitched in the windows of the houses opposite.

Kinsella ignored the curious neighbours. ‘What did you do then, Constable …?’

‘Jarvis, sir. Constable Jarvis. I calmed the gentleman best as I could and escorted him indoors.’

‘On the contrary, sir. He went of his own accord. He led me to a ground-floor bedroom where I found the body of a woman.’ The constable paused. ‘It was not a pleasant sight.’

‘I entered the room to make sure the woman was no longer drawing breath, which she was not. The man was stood behind me all the while, moaning and wringing his hands. He kept saying, “Molly, Molly. I’m sorry. I’m sorry,” over and over again. There was nothing I could do for the poor woman. She was beyond all aid. I put the man down into the kitchen, went outside and found a boy …’

‘Ay, sir. I dispatched him to Store Street police station. He returned promptly with Inspector Machin and Sergeant Gandy.’

‘What did you do with the prisoner … The gentleman, I mean?’

‘I stayed with him in the kitchen.’

‘Did it not occur to you to arrest him?’ Kinsella asked.

‘On what charge, sir? He says he was the one who found the body. I had no reason to suppose he was responsible.’

‘Didn’t he say anything to rouse your suspicions?’

‘No, sir. He smoked a cigarette and, would you believe, put out meat for the cat. On Mr Machin’s instruction Sergeant Gandy went to the Orphan School, where they have a telephone, and requested assistance from G Division.’

‘Mr Machin is still with the suspect, sir,’ Constable Jarvis said. ‘It don’t be my place to say so but …’

Twenty years back, in the darkest days of the Land Wars, Jim Kinsella and Tom Machin had been recruits together in the Kevin Street barracks where Jim’s father had been a serving sergeant in the mounted troop. Paternal precedent had conferred no favours on young Kinsella. Conforming to the Metropolitan’s rigid rules while living up to his pappy’s reputation as a rough-riding martinet had been hard on him. Unlike his father, he had no stomach for recreational drinking, no affinity with horses or much interest in the competitive sports by which a recruit’s mettle was judged. He was intelligent, diligent and ambitious for advancement, which, in the eyes of many of his cohorts, set him apart from the pack.

Now, in the spring of 1905, Kinsella was settled in G Division Headquarters in the lower court of the Castle and Machin, by a circuitous route, had wound up in the Rotunda Division where his progress up the ranking ladder had stalled.

They met in the narrow hallway and shook hands.

At six feet, four inches tall Kinsella towered over Tom Machin who had attained the Metro’s minimum height requirement only by lifting his heels and combing up his quiff.

‘Are you still plunging into the briny at every opportunity?’

Machin’s fondness for sea bathing had been quite a joke in the old days. ‘Much less often than I used to,’ he admitted. ‘The sea seems a lot colder than it did twenty years ago.’

‘Most things are,’ Kinsella said. ‘Why have you sent for me?’

‘I’d like you to take a look at a body before Slater turns up.’

‘I prefer to be armed with something more substantial than guesswork prior to making an arrest.’

‘Where is the body?’

‘In the bedroom on the left.’

‘Bloom, yes, Leopold Bloom. He’s downstairs in the basement kitchen with Sergeant Gandy. I’ve been staring at him for half an hour but the beggar is giving nothing away. I’m hoping you might have more luck with him than I’ve had.’

Stairs went steeply up from the hall. A closed door, left, concealed the living room and another room lay at the far end of the hall. The bedroom to which Machin admitted him was cluttered with furniture and the window screened by a blind. Filtered daylight gave the room a strange hazy air, like one of the veiled tableaux with which Lowry had closed his pantomimes back in the days when, as Kinsella’s father was constantly reminding him, women were women and you could get blind drunk for fourpence.

Sprawled across the bed, the woman would have fitted perfectly into one of Lowry’s tableaux; a motionless centrepiece in a rumpled nightdress displaying just enough limb and bosom to rouse an audience to whistles but not quite enough to bring down Lowry’s curtain on charges of indecency.

Her position was languid and unnatural. Clad only in a night dress, she lay half on and half off the double bed, shoulders and arms resting on the floor, her feet entangled in the sheets, belly covered by a bedspread and her face tucked coyly into the crook of an elbow. Her hair, unpinned, spread over her bare shoulder and if it hadn’t been for the pool of blood around her head you might, indeed, have thought she was posing.

‘Is this how your constable found her?’ Kinsella asked.

‘Jarvis disturbed her just enough to feel for a pulse. He did admit to pulling up the bedspread to cover her parts, though.’

‘To protect her modesty.’ Kinsella nodded. ‘We’ve all done that in our time. No one else clumping about in here?’

‘Only me. I had Sergeant Gandy check the house from top to bottom, by the way, and the outhouse and garden. No signs of an intruder.’

‘You think it’s the husband, don’t you?’

‘He’s the obvious suspect, of course,’ Machin said. ‘But certain factors don’t quite chime. You’ve always had a nose for the unusual, Jim. See for yourself. See what you make of it.’

Kinsella squatted by the side of the corpse and eased the woman’s head from the rug. A heavy blow had crushed her upper lip and driven it into her teeth and up into the base of the nostril, the flange of which was torn. The wound that gave Kinsella pause, however, had been inflicted on the socket of the left eye; a blow with a jagged object had gouged out the eyeball which clung on aluminous threads to her cheek. A splinter of some brittle material decorated with a tiny flower, possibly a forget-me-not, protruded from the spongy mass of the socket.

Scattered on the floor between the woman’s head and the trailing bedspread were a number of small white fragments and three or four larger pieces. One of the larger pieces had a handle attached to it and another a spout.

Kinsella lowered the woman’s head and got to his feet.

‘Bludgeoned to death with a teapot,’ he said. ‘Now that’s an original way to meet a sticky end. I don’t see any sign of spillage so it’s safe to assume the pot was not filled with tea.’