Read What You See Is What You Get: My Autobiography Online

What You See Is What You Get: My Autobiography

BOOK: What You See Is What You Get: My Autobiography
9.39Mb size Format: txt, pdf, ePub
Read Book Download Book
ads 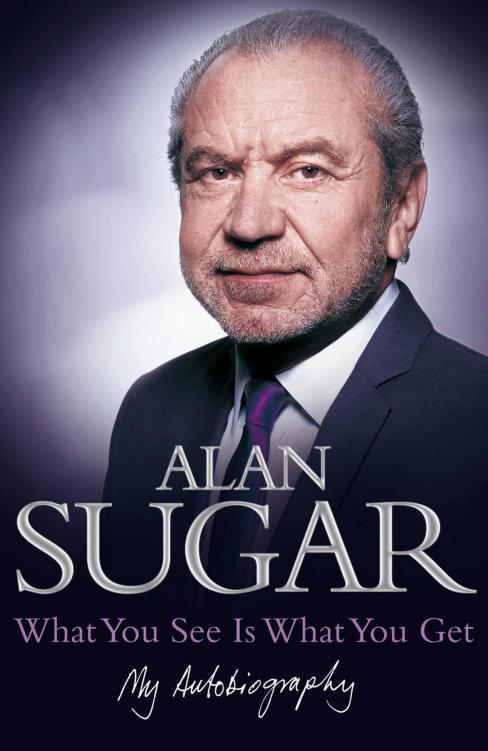 What You See Is What You Get: My Autobiography
Alan Sugar
Product Description

From a Hackney council estate to the House of Lords, this is the extraordinary story of one of our greatest entrepreneurs.

Alan Sugar was born in 1947 and brought up on a council estate in Clapton, in Hackney. As a kid he watched his dad struggle to support the family, never knowning from one week to the next if he'd have a job. It had a huge impact on him, fuelling a drive to succeed that was to earn him a sizeable personal fortune. Now he describes his amazing journey, from schoolboy enterprises like making and selling his own ginger beer to setting up his own company at nineteen; from Amstrad's groundbreaking ventures in hi-fi and computers, which made him the darling of the stock exchange, to the dark days when he nearly lost it all; from his pioneering deal with Rupert Murdoch to his boardroom battles at Tottenham Hotspur FC. He takes us into the world of
The Apprentice
, and describes his appointment as advisor to the government and elevation to the peerage. Like the man himself, this autobiography is forthright, funny and sometimes controversial.

Today, Lord Sugar is the chairman of Amshold Group Ltd. In 2009 he was appointed by PM Gordon Brown as Enterprise Champion to advise the government on small business and enterprise, and was also awarded a life peerage, becoming Alan, Baron Sugar of Clapton in the London Borough of Hackney. He continues to appear in
The Apprentice
.

What You See Is What You Get

This book is dedicated to my mum and dad,

Johnnie and Rita, and Harold Regal

And to some of those who served me so well at Amstrad but are no longer with us:

And to two men who helped me flourish in business but, sadly, are also no longer with us:

2. 'Shame About the Spelling, Sugar'

3. The Man at The Ministry

5. The Truck Driver and His Wife

Learning What People Want and Developing a Bullshit Radar 1969-72

6. A Taste of Japanese Culture

7. 'Young Man, You Have a Good Business'

9. Young Businessman of the Year

'And the Award Goes to the Amstrad Blockbuster Computer' 1982-6

10. 'I Am Changing Your Lives, Gentlemen'

11. Everything Was Going Wrong at Once

A Backseat at Amstrad and Shooting Bambi's Mum 1992-4

1. Mum as a young woman, with her family. From left to right: Mum, Auntie Libba, my grandfather Aaron, Uncle John (who had a hardware shop) and at the front is Uncle Jack.

3. Five months old and I've already survived being abandoned in a pram outside Woolworths. This was taken on 2 September 1947.

4. You can see why Shirley nicknamed me Mopsy. Here I'm about two years old.

5. Woolmer House, where we had the top corner flat.

6. I was a page boy at my sister Shirley's wedding to Harold Regal in March 1952. My cousin Denise was a bridesmaid.

7. With Mum and Dad in Springfield Park.

8. And about the same age, in more formal attire.

11. A page boy at Derek's wedding to Brenda. I'm on the left, and Adrian Press, Brenda's brother, is on the right. We were to meet again a few years later.

14. The stamp I used when I set up as a 'professional' photographer.

16. On the beach with my best friends. From left to right: Steve, Tony, Geoff and me, with Malcolm sitting.

18. I set up Amstrad in 1966 when I was nineteen. This is the very first Amstrad branded product - a cigarette lighter!

20. Ann's parents, Johnnie and Rita, dancing at our reception.

21. Mum and Dad dancing at our reception.

22. My wedding day. A memorable and wonderful occasion, but I couldn't wait for it to be over!

24. I bumped into Sammy Davis Junior at the Hilton Hotel, Tokyo, May 1976. I knew no one would believe me unless I had photographic evidence.

25. The tower system that changed our fortunes.

26. The flotation of Amstrad made the front page of the
Evening Standard
. I kept one of their advertising banners.

27. Mr Otake, the boss of Orion. I put up with his mad ways as no one could beat Orion for quality and speed of production.

28. Lord Carrington handing me the
Guardian
Young Businessman of the Year Award in 1984. Inside, I was worried the Amstrad bubble was going to burst.

29. The CPC464, which took off like a rocket, outselling the competition.

31. With Marion Vannier in 1986 at one of the Amstrad exhibition stands.

32. With Sir Clive Sinclair at the press conference to announce that Amstrad had bought his company, 1986.

35. With Mr Funai outside the Funai-Amstrad factory in 1987. The venture turned out to be a bit of a disaster.

36. Showing Prince Charles a new PC at an event in Birmingham in 1988.

37. With Ann and Gulu Lalvani.

39. Simon's Bar Mitzvah, with his proud grandfathers and dad.

40. Daniel's Bar Mitzvah, in the garden at Bramstons.

42. At the launch of Sky with Rupert Murdoch, June 1988. I'd just promised in front of the media to make satellite dishes for PS199 - and I didn't have a clue how I was going to do it!

44. The Dream Team of myself and Venables on the pitch at White Hart Lane, 22 June 1991. The dream quickly became a nightmare.

45. I'd dismissed Venables, God's gift to football, and you'd have thought I'd shot Bambi. This Sun cartoon amused me, but the fallout, in reality, was hard to handle.

46. After my libel victory against Venables, I had this giant cheque printed up. The money went to Great Ormond Street Hospital.

47. With Ossie Ardiles, a Tottenham legend and the first manager I appointed.

48. The handshake that sealed Jurgen Klinsmann's transfer to Spurs. I'd arranged for Sky Sports to capture the moment.

49. David Ginola turned out to be one of the greatest players ever to perform at White Hart Lane.

50. Daniel came to Spurs to help with the running of the club.

52. With Stanley Kalms on his boat. We got on well socially, but there were never any favours coming from Dixons.

53. Reunited with my old mates. From left to right: Malcolm, Geoff, me, Steve and Tony, at my fiftieth birthday party in March 1997.

54. With Gordon Brown, then Chancellor of the Exchequer, in April 1998.

55. With George Graham, God's
other
gift to football and my lastditch attempt to find success on the pitch.

56. I was honoured to accept a knighthood from Her Majesty the Queen in June 2000.

59. I thought it was great being part of a popular show like
The Apprentice
. Here is a selection of the winners over the years, clockwise from top left: series 1 winner Tim Campbell; series 3 winner Simon Ambrose; series 5 winner Yasmina Siadatan; and series 4 winner Lee McQueen.

60. Nick Hewer and Margaret Mountford had worked with me for many years before the show. It was
The Apprentice
that made them friends, though.

61. And here I'm with the candidates of
The Junior Apprentice
.

63. It was a great honour to be made Lord Sugar of Clapton. Ann, of course, was already a lady.

64. On the day of the ennoblement ceremony, 20 July 2009, I got emotional seeing my family and thinking about my mum and dad. From left to right: Brenda, Minnie, Harold Regal, Johnnie, Ann, me, Daphne, Shirley, Harold Mazin and Derek.

BOOK: What You See Is What You Get: My Autobiography
9.39Mb size Format: txt, pdf, ePub
Read Book Download Book
ads