Read What He Hides (What He Wants, Book Seven) (An Alpha Billionaire Romance) Online

What He Hides (What He Wants, Book Seven) (An Alpha Billionaire Romance) 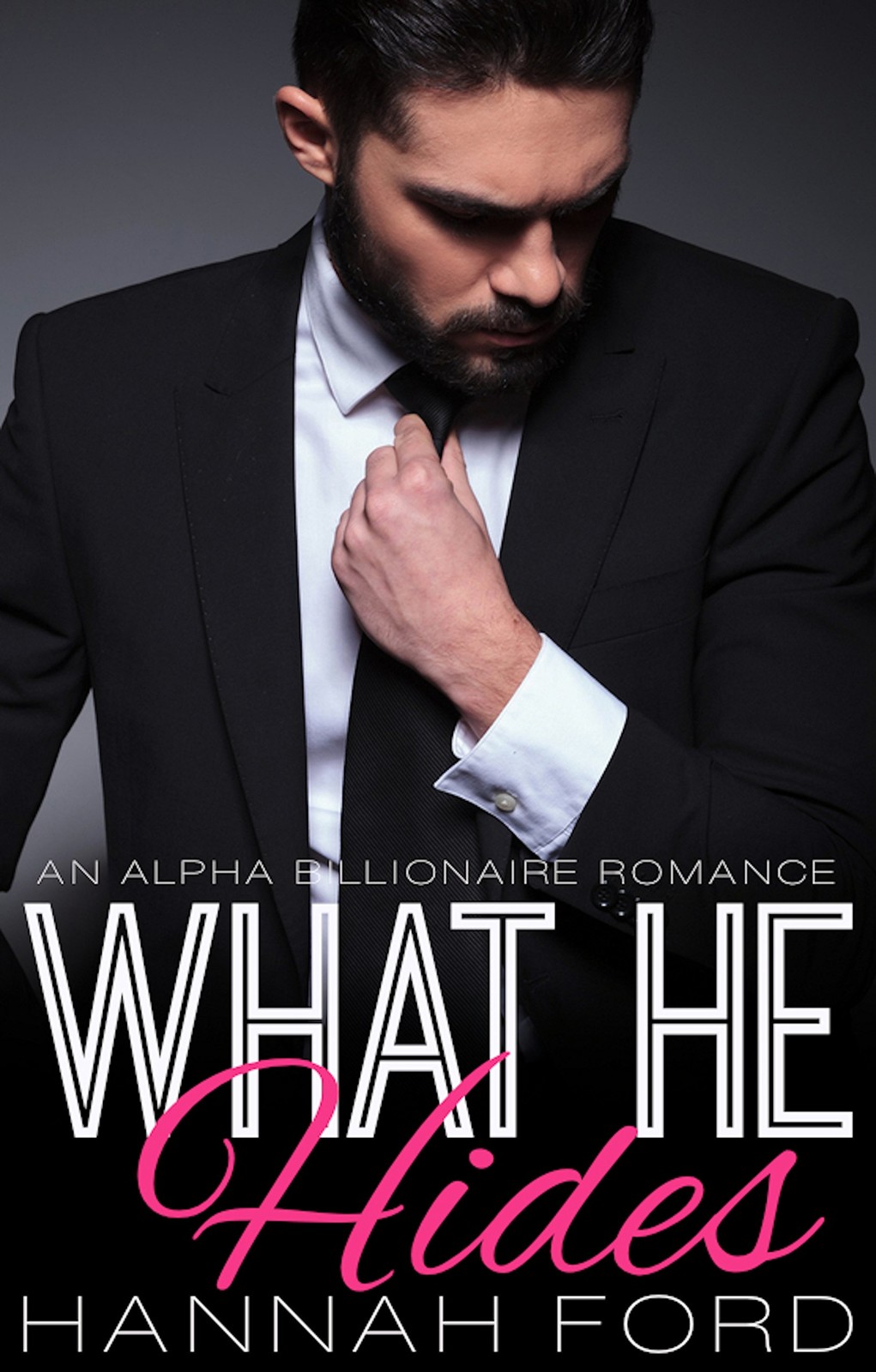 WHAT
HE HIDES (What He Wants, Book Seven)

This book is a work of fiction
and any resemblance to any persons, living or dead, is entirely coincidental.

I stood outside Noah’s office, my hand
frozen on the doorknob.

I thought
about going back inside.

What was
I thinking, demanding to go to Force just because I got some crazy phone
call?

You should go back in and tell
Noah,
I told myself.

You
should tell him what happened, you should confide in him.

You say you trust him, so prove it.

Aside from anything personal that was
happening between Noah and I, he was my client, or at least, I was working on
his case.

He had the right to know
exactly what was happening.

But if I told him, he wasn’t going to
take me to Force.

And if I told
Professor Worthington, the same thing would happen.

They would insist I not go.

Noah was already reluctant to take me, saying I wasn’t
ready, that I wasn’t prepared for the kind of things that happened there.

But I
was
ready.

I wanted to go to Force with Noah, not just because of the
case,
but
for our relationship. The idea of officially
becoming his submissive, of him teaching
me and testing me…
it
sent a warm thrill through my entire body.

My head was spinning, my thoughts
swirling around, knotting themselves into a confused tangle.

I turned around to see a smartly
dressed woman in a grey suit standing next to me in the hallway.

She looked down at my hand, which was
still on Noah’s door, and frowned.

I shook my head.

I made my way down the hall.

If I didn’t hurry, I was going to be late
for class.

When I got outside the building, Noah’s
car was parked against the curb, ready and waiting to take me to campus.

I wanted to be able to use my iPad to google Audi James. And
something about doing that while Noah’s driver sat a couple of feet away from
me felt like a risk.

So I turned away from the car and began
walking toward the subway.

I was
clutching my phone in my hand, almost afraid to put it in my bag in case my
anonymous caller called back.

Sure enough, as soon as I got onto the train
platform, my phone rang.

My heart leapt into my throat as I
checked the caller ID.

But it wasn’t Anonymous.

There was a long pause.

“Charlotte,” Noah said, his voice
careful and even. “Jared tells me you didn’t take the car.”

“The subway is not an acceptable mode of
transportation for you, Charlotte.

I thought I’d made that perfectly clear.”

“You did, but…I don’t know, that car is
too stuffy.

It’s nice out, I felt
like it would be nice to walk to the station.”

“If the car is too uncomfortable for you,
we can replace it.”

It’s just… I don’t know
,
I just felt like being normal for once.”

You’re extraordinary, and I need to
protect you at all costs.

My pulse quickened at the tone in his voice – stern and
admonishing, the kind of tone that made me wonder if he was thinking about punishing
me.

“Defying me needs to be paid for,” he
said, his voice husky and dark.

“There will be consequences for your behavior, Charlotte.”

Heat flew through my body in short little bursts that almost
seemed to move in time with my heartbeat.

They settled in between my legs, and I felt myself getting wet.

“When you’re done with class, please call
me.

I will have Jared pick you up
and bring you back to my apartment.”

“I’m going to the library after class,” I
said.

“So I can write up my report
for Professor Worthington.”

And then he hung up.

I stared at the phone in my hand,
frustrated.

What was that supposed
to mean?

Did he want me to call
after I was done at the library?

Or did he want me to call after class and not go to the library?

I felt like the rules of his game were
ambiguous and fluid, always changing and morphing, making it impossible to keep
up.

The train was pulling into the station,
and I boarded the car quickly, sliding into a seat and immediately pulling out
my iPad.

There was a middle-aged man sitting on my
right with his legs spread wide open, a bag of cheese popcorn on his lap.

He munched loudly, and I did my best to
angle myself away from him. The New York City Subway Authority had just put up
new signs explaining good subway etiquette.

There was literally a poster over our heads that showed a
stick figure sitting in the exact same position as the man next to me, with a
big red X through it, indicating you shouldn’t do it.

I tried to tamp down my annoyance as I pulled
up my
internet
browser.

I typed “Audi James” into google and
waited.

The service was spotty
down here, and it took a moment for the page to load.

I held my breath, crossing my fingers that I’d find the
information I was looking for.

What if Audi James had no
internet
presence?

What if he was one of
those the rare people without a facebook page or a linkedin or an online
wedding announcement?

Or, worse, what if there was no Audi
James?

What if whoever called me
phone didn’t know what they were talking about, or had done it just to fuck
with me?
Josh’s face popped into my mind again, the way he’d just stood there outside my
room after what I’d seen him doing, the way he’d denied it to Julia, even
though I’d caught him red-handed.

Could he have made the call?

But why would he do that?

Just because he was
crazy and liked to toy with people?

Was it possible maybe he wanted me off the
case, that
he thought if he could somehow get rid of me,
he’d be able to slide in and take over, be the point person for Professor
Worthington?

That wouldn’t make
any sense.

Josh knew Noah hated
him, knew Noah would never stand for that.

Was that why Josh had told me he didn’t think Noah was
guilty?

So it would put the idea
in my mind and he could send me on some wild goose chase?

The search results popped into view a
second later, and it became instantly clear I’d had nothing to worry
about.

There were pages and pages
of results for Audi James – articles and websites and pictures and
anything else you could think of.

Because Audi James was a murderer.

I scrolled through, scanning the
headlines with my eyes.

“AUDI JAMES ARRESTED FOR MURDER OF UPPER
EAST SIDE SOCIALITE”

I sucked in a breath as I clicked on the
Wikipedia page.

I read the article quickly, taking in the
specifics of the case, trying to turn on my lawyer brain and distill, the way
they’d taught us in law school, trying to focus in on the details that might be
important, instead of the minutia of the case.

I got the gist of it pretty quickly
– Audi James had been arrested for the murder of Rhonda Callahan, a
wealthy socialite, in her Upper East Side apartment.

Rhonda Callahan was married, but had been rumored to be
having an affair with James.

The DA’s office painted
Audi James as a psychopath, the worst kind of sex predator, the kind of man who
forced women into playing these sex games, tortured them mercilessly and then
hurt or killed them.

The parallels between his case and Noah’s
were almost shocking.

There had
been other women Audi had been involved with, other women who’d ended up
missing or murdered. But there had never been enough evidence to arrest him.

Audi had been spotted in
her apartment building moments before she was killed.

His DNA was all over the scene, and the knife he’d used to
kill her was left in the bedroom with his fingerprints on it.

The prosecution painted a picture of a
sex game gone wrong.

They claimed
the sex had started out as consensual, but that Audi had pushed it too far,
that he’d kept going, tying Rhonda up and raping her for hours, even after she
told him to stop.

But he claimed it had been
in self-defense.

He said he’d gone
to her apartment to break up with her, that they’d had sex before he told her
he wanted to end things.

They’d
participated in their rough sex games that night, but Rhonda liked it, had
pushed for it,
had
insisted it was the kind of sex she
wanted.

When it was over, Audi claimed, he told
her he didn’t want to see her anymore. He said Rhonda lost it, ranting and
raving before coming after him with a knife, which he’d then used to kill her.

It was a crazy story that stretched the
edges of believability.

Audi was a
big man, and to think that he needed to stab Rhonda twenty-one times in
self-defense was really beyond incredulity.

But he’d gotten off.

The man next to me shifted on his seat,
his leg pushing into mine and interrupting my thoughts.

He held out the bag of popcorn.

He was dressed in a pair of khakis and a
white dress shirt, obviously on his way to work.

I had no idea why he would be eating cheese popcorn for
breakfast, but his fingers were turning orange and it was making me
nervous.

He was going to get a
stain all over his crisp white shirt.

He leaned over and glanced at my
screen.

“That shit was crazy.”

“You know the case?”

“I’m kind of a trial junkie.

I watch them on livestreams, that kind
of thing.

“You doing some kind of report or
something?”

I gave him a polite smile, but I didn’t
really feel like making small talk with a stranger.

I had too much other stuff on my mind.

“That case was crazy,” the guy said,
obviously not getting the hint.

He
munched on his popcorn and shook his head, remembering.

“That guy was guilty as all hell.

It was so obvious to everyone.

But his attorney, man, he was
something.”

He frowned, a deep V
appearing in between his eyes as he tried to remember.

“What was that guy’s name?

He was the reason Audi James got
off.

No one else could have done
that.

The Lumberfox (Geekrotica) by Lovelace, Ava
The Impostor by Damon Galgut
April 8: It's Always Something by Mackey Chandler
A Fearsome Doubt by Charles Todd
Night of the Candles by Jennifer Blake
Running in Fear Escaped by Trinity Blacio
Relativity by Antonia Hayes
Cat Found by Ingrid Lee
Master Of Paradise by Henley, Virginia
The Lightning Key by Jon Berkeley