Read What a Girl Wants Online

What a Girl Wants 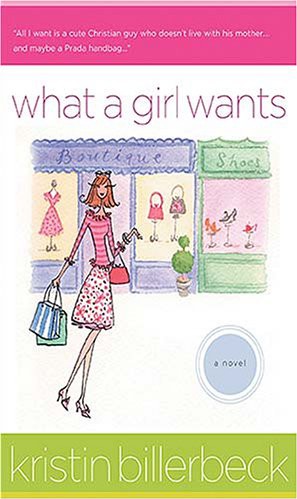 Praise for what a girl wants by Kristin Billerbeck

“Original and witty . . . Ashley Stockingdale is an unforgettable heroine. I can’t wait to see what happens to her next!”

—ROBIN LEE HATCHER,
best-selling author of
Legacy Lane
and
Beyond the Shadows

“Humorous yet poignant . . . Single or not, [women will] relate to Ashley Stockingdale’s plight and the themes of relationship explored in
What a Girl Wants
.”

—KRISTEN HEITZMANN,
best-selling author of
The Still of the Night

“A hilarious book . . . [S]tands out like a pair of Jimmy Choo shoes in a row of loafers. What this girl wants is a sequel!”

“
What a Girl Wants
showcases Kristin Billerbeck’s startlingly fresh voice and wry humor that will have you laughing and cheering for Ashley Wilkes Stockingdale.”

—COLLEEN COBLE,
author of
Without a Trace

“Better than a Kate Spade handbag, an Audi convertible, and two bags of chips after midnight! Kristin Billerbeck has all it takes and more to write chick lit: acerbic wit, an eye for the most frivolous of detail, and finally, a soul that recognizes loneliness and the struggles we women face in the day to day. I’ve been reading chick lit for a long time, it’s great to finally absorb an offering that brandishes more hope to the reader than paid off credit cards and a new boyfriend.”

—LISA SAMSON,
author of
The Church Ladies
and
The Living End

“Kris Billerbeck has blasted her way onto the chick lit scene and streaked to the top in one well-crafted novel.
What a Girl Wants
is exactly what I want to read. Keep ‘em coming!”

“[Y]ou’ll smile, you’ll cry, and you’ll cheer for Ashley Wilkes Stockingdale as she moves from what a girl wants to what a girl needs. It’s a fast, fun read, and I highly recommend it!”

“Sweet, sassy, and seasoned with grace. . . . Bravo to Kristin Billerbeck for a charming, laugh-out-loud tale!”

—SUSAN MAY WARREN,
author of
Happily Ever After
and the Deep Haven series

what a girl wants

Other books by Kristin Billerbeck:

Ashley Stockingdale novels
She’s Out of Control
With This Ring, I’m Confused

All rights reserved. No portion of this book may be reproduced, stored in a retrieval system, or transmitted in any form or by any means—electronic, mechanical, photocopy, recording, or any other—except for brief quotation in printed reviews, without the prior permission of the publisher.

Thomas Nelson, Inc., titles may be purchased in bulk for educational, business, fund-raising, or sales promotional use. For information, please e-mail [email protected]

What a girl wants / by Kristin Billerbeck.

Thank you to everyone who believed in this book. First and fore-most, thank you to Colleen Coble, who brought me encouragement when I needed it most. Your friendship is incomparable and truly a gift. Thank you to Ami McConnell for taking a chance that the Christian market was ready for Chick Lit. And thank you to Lisa Tawn Bergren for her incredible work in making this a better manuscript. You are all godly women and I praise our heavenly Father for allowing our paths to cross.

Thanks to Colleen Coble, Denise Hunter, Carol Cox, and Nancy Toback for reading this manuscript when it wasn’t ready to be read. And thanks to the youthful readers, Kara Coble and Gina Siegle, who helped me know when a reference was far too old for Ashley’s generation.

To my husband, Bryed, who had to put up with my ‘chick’ attitude far too often, and to our precious four children Trey, Jonah, Seth, and Elle—you make life worth living.

Thanks to Steve Laube, my gifted agent, and to ChiLibris for your daily conversation (for putting up with my outlandish opinions and political rants, etc., when I was bored).

And finally, thank you to my best friend (since I was five), Beth Harke. How would I ever find the chick within without you? I’m eternally grateful God brought such an awesome person into my life, and helped us both to find Him together. (After the gummy bear incident, of course.)

T
his is Rick Ramirez, reporting for
Entertainment This Evening
.” The announcer rolls his “R’s” to emphasize his Latin heritage;
he’s a cross between Ricardo Montalban and the used car salesman
up the street.

“We’re live in Silicon Valley at the celebrated wedding of Ashley
Wilkes Stockingdale to the world’s most eligible bachelor, John Folger,
heir to the coffee fortune. Not since JFK, Jr. have the world’s single
women mourned a wedding as today, but Ashley is the woman who
stole his heart—the woman who left the sworn bachelor no other
option but marriage. And we hear the ladies cry, Who is this woman?
For more on Ashley, we go to Jen Jenkins in ’copter 7.”

“Rick, we’re live over the Stanford University chapel, awaiting the
much-anticipated arrival of the enigmatic Ashley Stockingdale: A
woman who brought Manolo Blahnik, shoemaker to the stars, all the
way to California to design her diamond-encrusted bridal slippers. Who
is this Ashley?” Jen leans into the camera’s lens, “I’m glad you asked.

“Ashley Wilkes Stockingdale came from humble beginnings, and
grew up in a quaint California bungalow. The child of a homemaker
and a carpenter, Ashley always knew she was destined for something
great. Although there was time for frivolity, like high school cheerleading,
Ashley was a serious student, passing the California bar her very
first time out. And she hasn’t forgotten her roots; when asked if
Franklin Graham might perform the ceremony, Ashley declined, choosing
her beloved pastor instead. Rumor has it she’ll arrive in a cream-colored,
body hugging Vera Wang gown. The world waits . . . back to
you, Rick.”

Yes, the world waits. And so do I.
There’s single for a season, and single
for a reason.
My singles’ pastor used to say that and laugh like staccato Spongebob. I remember thinking it was hilarious until the day I turned thirty. Then my thoughts turned much darker, like hey, maybe
I
am single for a reason. That’s a depressing day, when you realize Prince Charming isn’t riding in on a white horse, and J. Vernon McGee is starting to sound awfully handsome on the radio.

I gaze around the singles group and it’s rife with its reasons. Tim Hanson has those hair plugs that look like he’s sprouting rows of corn on his head. Jake Henley has been pining over an ex-girlfriend that no one’s ever seen, for going on three years now. He still talks to her on the phone, and I just want to say, “Wake up, dimwit! She’s moved on!” To waste your life on an emotional relationship that is going nowhere is such an easy out, don’t you think? It makes him unavailable, and avoiding commitment is now that much simpler.

There’s Kay Harding, resident organizer and analretentive of the group. She can run everyone’s life perfectly and is content to do so. The sad thing is we all go along, without enough will of our own to plan our social lives. Kay does a fine job, and we always have something to do on Saturday night, so who’s complaining? Kay’s home looks like Martha Stewart lives with her, but she’s alone. Just like me. So here I’m left to wonder, if all their reasons are so blatantly obvious, what’s mine? And why can’t I see it when I see everyone else’s so clearly?

When I graduated from law school from Santa Clara University and became a patent attorney, I thought the world was my oyster. My head had a hard time fitting through the doorway, it was so grossly oversized. It’s been shriveling ever since with the daily rejection that is my reality.

My mother told me that no man wanted to marry a lawyer. “You’re too educated,” she’d say. Like I was supposed to dumb myself down for Mr. Right. I laughed at such a ridiculous concept. After all, I’d dated plenty in college, but I waited on real romance because I knew there was someone out there who would make my feet tingle and my brain fog. Alas, I’d settle for a phone call at this point. My mom’s intellectual theory is starting to gel like her aspic. But I live in Silicon Valley—it’s not like intellect is a bad thing here—so where’s my knight in shining silicone?

Family support is everywhere. Besides my mother, there’s my brother who calls me “bus bait”—as in, I have more chance of getting hit by a bus than married after thirty. They’ve proven that study is totally bogus, but does that mean anything to my brother? Absolutely not. I just pity the poor woman who eventually gets stuck with him. He’s a bus driver, by the way. And probably the one to run me down just to prove his point.

Don’t get me wrong. I live a full life as a Christian single, and I’m not waiting for life to start when I get married. I just can’t stop wondering, what is
my
reason? Do I have some glaring flaw that I cannot be witness to? This kind of thing just drives me crazy, like when men my age marry twelve-year-olds fresh from college. Okay, so they are in their early twenties. But I remember rooting for
The
Bachelor
when he chose a woman twenty-seven. Finally, a man who saw a little age like a fine wine, rather than vinegar past its prime.

Yet here I sit, with all the same single people I’ve been sitting near for years. Once in a while, we’ll get some cute young thing in her twenties and some single guy swoops out of nowhere and whisks her away. Leaving us “reason” people wondering what strange scent we give off. Maybe it’s desperation.