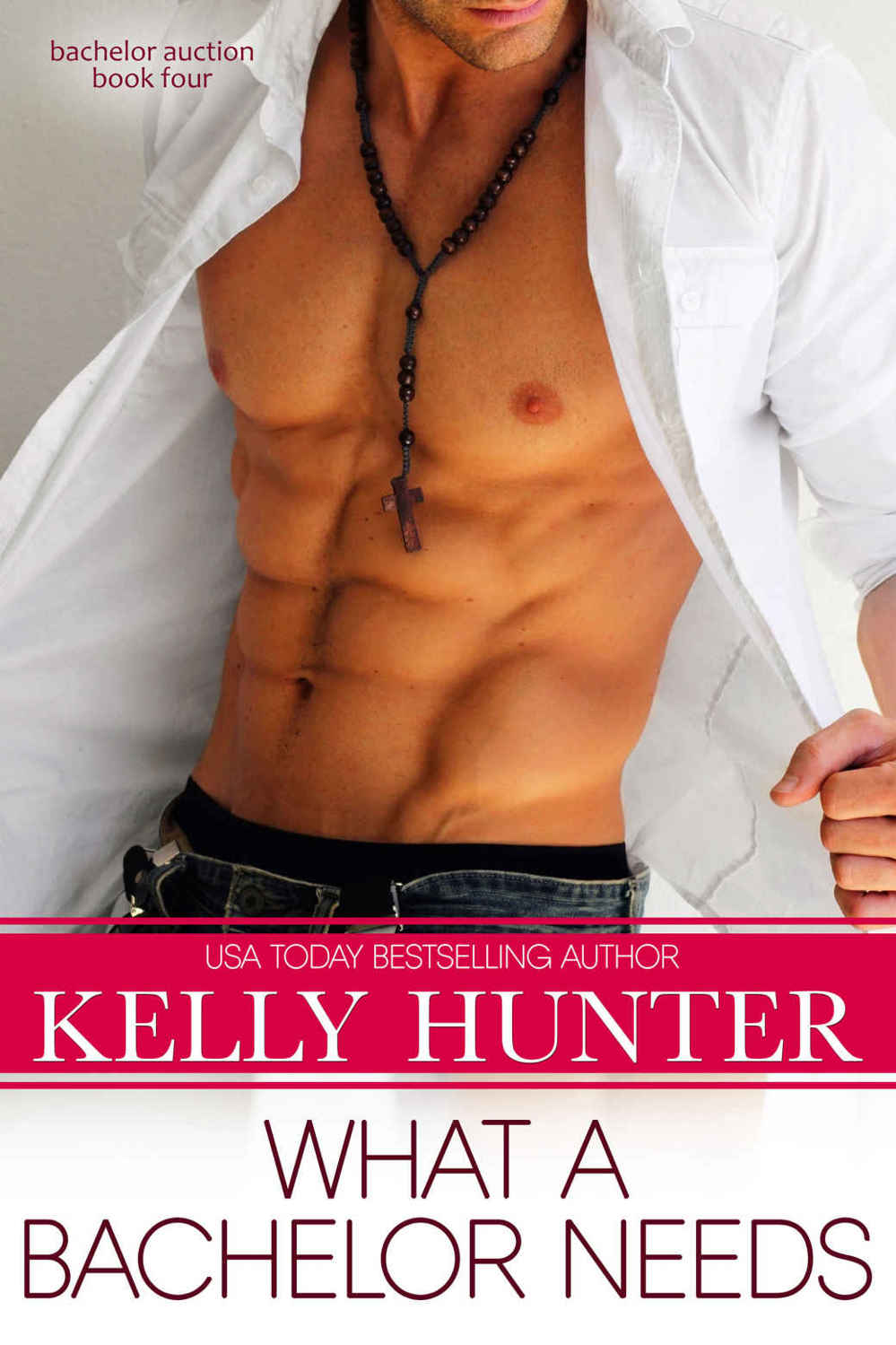 What a Bachelor Needs

What a Bachelor Needs

This is a work of fiction. Names, characters, places, and incidents are products of the author’s imagination or are used fictitiously. Any resemblance to actual events, locales, organizations, or persons, living or dead, is entirely coincidental.

Sympathy for the Devil

Your date with ski champ Jett Casey is an either/or deal. He’ll take you off-piste for the ultimate Montana ski adventure or he’ll put his handyman skills at your disposal for a week. Which one would you choose?

Single mom Mardie Griffin has a run-down old house in need of fixing and a memory of Jett Casey as her savior in a time of great need. So when her friends acquire Jett’s services at a bachelor auction and send him to fix up her house, she sets aside her mistrust of men and lets him in.

Elite athlete Jett Casey has the world at his feet and no desire for stability. But there’s one woman he’s never forgotten and if he can help make her
safe
this time, maybe she’ll stop haunting him.

No strings, no sex, no commitment. Just fix things. Surely it can’t be that difficult…

M
ardie Griffin smoothed
her apron and tried not to think about the five hours left to go before her shift ended. It was six-thirty in the evening, give or take, and she’d been here since nine this morning, helping to ready Grey’s Saloon for Marietta’s first ever bachelor auction. All the money raised would go towards helping Molly Dekker pay for her ten-year-old son’s ongoing medical expenses, given that young Josh had taken a fall up on Copper Mountain a few months ago and ended up in a wheelchair.

Mix one slightly disreputable bar with a fundraiser for a young boy’s healthcare needs, throw in half-a-dozen or so of the town’s most eligible bachelors – in various stages of denial that they’d ever said yes to being auctioned off like prize bulls – and it wasn’t exactly a hardship to be here. Mardie
wanted
to work this evening, she wanted to feel the room pulsing with life and laughter and the room did not disappoint.

There was just one problem.

Jett Casey was here, ready and willing to go to auction, bachelor number one on the menu, and Mardie could barely look at him without feeling a mad mix of emotions that started with longing and ended with gut deep shame and fear. She’d had a high school crush on him for years – madly in thrall to his daredevil fearlessness and more than a little enamored by his face and the body attached to it. She’d been one year younger than him, and she’d watched him from afar and wanted what she didn’t have a hope of obtaining. On rare occasion, he’d looked back at her with just enough
something
in his eyes to feed her dreams.

If only things had stayed that simple, she could have greeted him with a smile and been generally pleased to see him here this evening. She’d followed his career and watched him ski for gold with her heart in her throat, just like everyone else in Marietta. He was one of theirs and, when he competed, the people here rode on his shoulders all the way. She could have been a regular, everyday Jett Casey fan.

If one dark, dank, fear-infested night in Bozeman, two years ago, hadn’t changed everything.

Now all she wanted was for him to go far, far away and take his knowledge of her with him so that her filthy little secret could stay hers and hers alone.

Mardie snuck a glance at Reese Kendrick, Grey’s bar manager and wondered whether she could plead sudden illness and take the rest of the night off. Reese would let her, gunshot glare notwithstanding. But then she’d be leaving him one waitress down on a busy Saturday night and then she’d be low on hours for the week and then short on pay and scraping to make her mortgage payment come the end of the month.

No, far more fiscally responsible for to stay and work through the evening, keep her head down, her smile in place, and stay the hell out of Jett’s way.

He was first bachelor on the block. Maybe he’d
leave
soon after they sold him.

Athletes needed their sleep, didn’t they?

Not that the Jett she remembered had ever been one to say no to a party.

Reese was her go-to guy behind the bar tonight, and she rattled off her orders as she stacked empties into a waiting dishwasher tray.

“How slammed are you?” he wanted to know.

“I want you to take booths two, three, and four off Rosie. Ryan wants another set of hands in the kitchen and she’s it.”

“Send me to the kitchen,” she offered instantly.

He didn’t need to explain. As a permanent employee who knew everything there was to know about running the floor at Grey’s, she was of far more use to them out here than in the kitchen.

Although… what if they had more help out here?

“Sawyer and Ella Grace are here,” she told Reese. “Want me to ask Sawyer if he’ll give us a hand?” Sawyer had bartended for them a year ago; back when they’d all thought he was a misfit Aussie drifter rather than heir to one of the world’s largest brewing companies.

“Tell him to sit back and bid big,” Reese rumbled. “We don’t need him.”

Reese cut her a glance, even as he kept on filling glasses. “You look tired and underfed.”

“No, I look efficient, hardworking, and ever so slightly winsome. It’s a good look for me this evening.” No need to tell him that Claire had been teething or that Mardie was tempted these days to cough up a lung in exchange for a solid eight hours of sleep. “All part of my winning plan for bigger tips.” Not that her take-home this evening would be anything to brag about, given that all the waitstaff had agreed to donate half their tips to the fundraiser.

Hitching her smile a little higher, Mardie slid a freshly loaded tray of drinks onto her hand and sashayed back out onto the floor. Tiredness came with single motherhood, hard work, and a monster home loan. Tiredness came with the life she’d chosen to live, and she wouldn’t trade any of it.

She weaved her way through the crowd to the table where Sawyer, Ella Grace, and four others had squeezed into a booth. Her smile grew more genuine as she began to set drinks down in front of people. Ella Grace Emerson had been three years behind her at school but these days Mardie counted her as one of those true friends who stuck around, even when the going got ugly.

“No, I look fit, healthy, and flush with the joys of hard work and home ownership. I have a new hot water system,” she finished smugly. Last time they’d spoken, Mardie’s hot water tank had just died and Ella had been there to witness both the panic and the cursing. “Paul Harris hooked it up for me yesterday. And before you ask, I also had him install a heating system in Claire’s room.”

“What about
your
room?”

“He half-fixed the one in mine. Said it’d go for weeks.”

“’Cause that’s useful, a half-fixed heater in the middle of
winter
.”

“I can always sleep in Claire’s room. Patience, my friend. Patience and tips. Are you bidding?”

“I am. On behalf of Emerson’s Holdings, I am here to bid big.” Ella was a cattle dynasty princess, albeit one who worked just as hard as any of her father’s ranch hands. But spend money she could, and regularly did. “Which one’s the pick?”

“Depends.” Mardie spared a glance for Marietta’s finest bachelors, currently ranging between the end of the bar and the stairs that led to an off limits storage area. Tonight that storage area was doing double duty as a bachelor’s dressing and resting room. Half the bachelors were currently leaning over the railing looking cocky, aloof, amused, or just plain black-eyed grim. It was all very burlesque. Only newcomer to town, bad girl and former stripper, Lily Taylor, could have come up with an idea like this and made it stick. Lily could persuade most anyone to do anything. “Have you seen the bachelor menu for the evening?” Mardie gestured towards the flyer on the table. “What do you need?”

“Not a damn thing.” Ella slid Sawyer a thoroughly contented smile, and so she should, because Sawyer was one of the good ones. “Hence my need for a recommendation. I need your help here. Which one’s your pick?”

“Why do I have to choose? He’s your bachelor.”

“What about Casey? Remember him from school?”

“I’d say no, but you’d know I was lying.” Sawyer looked puzzled, and Mardie cut him a break and offered up a thumbnail sketch of Jett Casey as a teenager. “Heart throb, daredevil, impossible dream – every school has one. He was one year ahead of me, and I’m not sure how Ella even
scrapes
into remembering him.”

Ella grinned. “My first high school year was his last. It was still memorable.”

“Better buy him, then. He’s offering up a backcountry ski trip for a party of up to four people. You’d love it.” Mardie glanced towards the bar, only to find the man in question deep in conversation with Lily. Lily looked uncommonly harried, while Jett looked…amused. He also looked impossibly handsome in his tailored suit and white shirt that showed off the column of his throat and just a hint of muscled chest. He had inky black hair, olive skin, melting brown eyes and as for the body beneath the clothes… yes. Broad shoulders, narrow waist, strong thighs… oh, hell yes.

“Wonder why he’s never hooked up with anyone?” Ella mused.

“Probably too busy chasing World Championships.” Mardie grimaced because that sounded petty and she didn’t want to be. “He’s good people,” she offered reluctantly, and then because it was Ella, “He helped me out once.”

“Helped you out how?”

But Mardie had already made her exit. No time to chat, long story, and not one she was any way interested in telling.

“Will he remember you?” Ella called after her, and this time Mardie looked back and shrugged.

No matter how much she wished for a spell to make him forget.

Something in the Shadows by Packer, Vin
Beauty and the Chief by Alysia S Knight
The Man Who Ate the 747 by Ben Sherwood
Coaster by Bathey, Lorena
A Wolf in the Desert by BJ James
Stalked By Shadows by Chris Collett
Bad Influence by K. A. Mitchell
Mad Lord Lucian by West, Shay
Rash by Hautman, Pete
Shannon by Frank Delaney