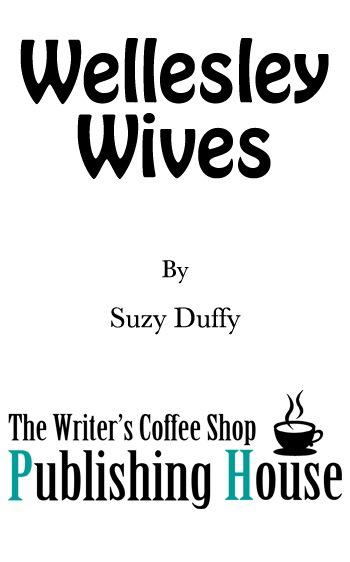 This work is copyrighted. All rights are reserved. Apart from any use as permitted under the Copyright Act 1968, no part may be reproduced, copied, scanned, stored in a retrieval system, recorded or transmitted, in any form or by any means, without the prior written permission of the publisher.

This book is a work of fiction. Names, characters, places and incidents are either a product of the author’s imagination or are used fictitiously. Any resemblance to actual people living or dead, events or locales is entirely coincidental.

A CIP catalogue record for this book is available from the US Congress Library.

Suzy Duffy is an international and #1 bestselling author. She is Irish but moved her five kids, one dog, and current husband to Boston, USA in 2009 because of the downturn in the Irish economy. Since arriving in the States, the U.S. economy has nosedived, too. She’s now considering a time share in Fiji!

She stays (arguably) sane by writing and loves learning about America and the American way of doing things. She has started a New England series of novels. The first is called Wellesley Wives and now she’s working on Newton Neighbors. Her genre is romantic comedy because that’s how she sees life.

Other than this, Suzanne was a national radio DJ and television presenter in Ireland before she started writing. She has also been an interpreter in the United Nations, Geneva, a water ski instructor in Crete, and a corn cutter in the south of France.

Her ambition is to keep all her children healthy and happy while staying married (to current husband), and to produce a book a year for the next forty years. Then she’ll have a rethink.

I want to thank my literary agent, David Forrer at InkWell Management for all his support and encouragement with Wellesley Wives. Dave, you’re the best.

At TWCS, thanks to Amanda Hayward, Caryn Stevens, Kathie Spitz, Jenn McGuire, Janine Savage, Jenny Pedroza, Annelies Ivens and the rest of the wonderful team. I want to say a very special thank you to my amazing editor, Shay Donovan, who has been my friend, my teacher, my confidante and a real blessing in my life. Shay, you are a treasure!

I have saved the best till last. Thanks to Michael, Alannah, Saskia, Lily, Zola, Hugo, all the Duffys and Higgins for letting me do what I do. I love you.

For the wonderful wives I’ve met in Wellesley, MA.

Lady Gaga poured through powerful stereo speakers and a pounding bass beat pulsed through Popsy. She had no idea where the car’s sound system was located. Nor did she care. All she knew was that the weather was absolutely perfect to test-drive a shiny new red Ferrari. The car dealer had already put the roof down and volume up, so all she had to do was turn the key in the ignition, put her sunglasses on, and roar off the dealer’s forecourt.

Driving through the leafy suburbs of Wellesley made Popsy smile. What could be lovelier than this, she wondered, except perhaps owning this spanking new Ferrari?

She fell in love with the car right away. The power under her was palpable. Normally she wasn’t aggressive on the road, but the urge to put her foot to the floor was immense. She adored the sound of the engine’s growl. It was like a wild animal—harnessed.

Even slowing down at traffic signals was fun. Because when Popsy stopped at the lights outside Whole Foods with the music blaring, she saw the jealous glances she was receiving. Some people were surreptitious, but most openly gawked. It was really quite gratifying.

She witnessed a very pretty blonde thumping her boyfriend when she caught him overtly ogling Popsy. She laughed. Yes, she definitely felt sexier in this car than in her own slightly more conservative Mercedes. Popsy would never have considered herself a red sports car kind of gal, but that was before she had actually tried it.

“What the heck,” she said as she caught sight of her reflection in the wing mirror. “After all, it is my birthday.”

An hour later, when she got back to the showroom, her husband Peter was waiting for her. He’d insisted she test-drive it on the actual day of her birthday. But even Peter, with his contacts, couldn’t have organized the incredible weather. He was also the one who said she must test-drive it alone.

“You won’t get the same sort of thrill with somebody else in the car. You need to be by yourself, with the wind in your hair and the music loud,” he’d said, and as usual, he’d been right.

Popsy had come to realize a long time ago that Peter was right about most things. He was a formidable man, still very handsome and thankfully a very wealthy one, too, because she was fairly sure that this year’s birthday present wasn’t going to come cheap.

“Well?” he asked, his expression saying he already knew the answer.

“Don’t you think we’re going to look a bit ridiculous, you know, with both of us driving Ferraris?” She reluctantly cut the engine, but Peter shook his head.

“I’m planning to change mine soon.”

“Yeah,” he said. “Ferraris are becoming way too ordinary. Everybody’s driving them these days.” He smirked at the car rep who tried to look like he wasn’t listening. But of course he was.

Popsy got out of the car, handed the dealer the keys, and came over to her husband. She snaked her arms in under his jacket and pulled him close. “You know, you really spoil me. And I love you for it. Now tell me,” she kissed his earlobe, “how expensive is this particular love token?”

“You don’t want to know,” he said, his voice getting deeper. Popsy knew she could still work her magic on him anytime, anywhere. He pushed her back a little to avoid getting too aroused.

“Split the difference,” he said and Popsy let go of him in shock.

She’d been picking random figures out of the air for fun. Her real estimate was closer to $80,000. “Two-hundred-fifty grand? For a car?”

“For yours and mine?”

“No. For yours and yours. That little baby,” he said, openly admiring the Ferrari as it was gently maneuvered right up to the window of the showroom, “is $500,000. It’s a special edition, doll. But then again, so are you.”

“Yes, but Peter, that’s too much money to spend on a car.”

“I’m glad you think so,” she said without much conviction.

“You know, it’s less expensive than your hair bills.” He laughed at her sudden self-doubt.

“Now just wait a minute. I’ve spent nowhere near half a million on my hair.” She put her hand to her head protectively. He used to tell her she looked like Goldie Hawn, but recently her best friend, Sandra, said she was more Kim Cattrall. Popsy was blessed with large dark brown eyes, fair hair, and a curvy, sassy figure. It took a lot of maintenance to keep it as blond as she did, but she wasn’t going to revert to boring light brown at this stage in her life.

“I’m not complaining.” He laughed. “You know I love your look.” He winked at her and stroked her hair. “In fact, I think it’s perfect for a Ferrari driving girl, but yes, the bills I’ve seen coming through have been pretty impressive. $2,000 to get your hair done?”