Read We Made a Garden Online

We Made a Garden 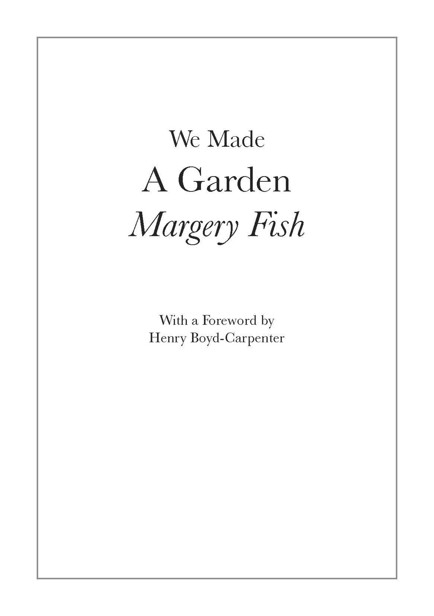 We Made a Garden

by the same author

A FLOWER FOR EVERY DAY

GARDENING IN THE SHADE

10 Gardening with a Knife

15 The Value of Evergreens

Foreword to the 1970 Edition

Strange as it may seem, Margery Fish took no interest whatsoever in gardening until she was in her late forties, but, at the time of her death at the age of seventy-six in March 1969, she occupied a unique position in the gardening world—not only on account of her incredible knowledge, but I think to an even greater degree for her personality and vitality. It was difficult for her family during the weeks following her death, when tributes flowed in from all over the world, to connect the ‘Margery’ we had teased unmercifully over ‘nepeta-as-it-should-be-grown’ and her sacred rose plantains with the grande-dame of horticulture of whom we read. However I suppose this was at it should have been, and certainly she would have hated us to have taken her too seriously.

It is little, if any, exaggeration to say that, during her last twenty years when most people of her age would have been content to settle back into the routine of Somerset village life she was working an eighteen-hour day. Probably not even those closest to her realised just how much she managed to pack in, for apart from planning and tending her garden more or less unaided, she wrote and lectured prolifically, and, despite (or perhaps because of) the volume of her correspondence, she would never go to bed until her desk was cleared, even if this meant sitting up far into the night.

We Made a Garden
was the first of her eight books, and has always been my own favourite: partly because, more than any of its successors, it gives the reader some idea of the author’s extraordinary energy during those first years when the garden at East Lambrook Manor was taking shape; and partly for its cheerful recognition that any gardener, novice or veteran, will make mistakes, and for her readiness to laugh at herself and her tribulations—while at the same time offering sound advice on countless aspects of gardening from basic layout to staking and composting. The book started life as
Gardening with Walter
, but the first publisher to whom it was shown took one look and declared gruffly: ‘Too little gardening, and too
much Walter!’ So the balance had to be redressed, while retaining the portrait of Walter Fish as the Jekyll-and-Hyde presence in the garden, at one moment the guardian of principles of sound design, at the next gloating at the demise of some small treasure carefully secreted in a crevice in the stone path.

For the book remains not only a gardening classic, but also a most entertaining study of the interaction of two great but very different characters, both of whom had made their name on Fleet Street, the one as News Editor and then Editor of the
Daily Mail
during the period of its greatest impact, and the other the much softer personality who had proved an indispensable assistant to both Northcliffe himself and Thomas Marlow during and in the years immediately after the First World War, before moving to what was called in journalistic circles ‘The Aquarium’.

East Lambrook Manor and its garden is a cheerful, welcoming place, even in the bleakest weather, and how the surveyor who looked at the house for the Fishes could have felt that it lacked character I shall never know. Character it must surely always have possessed, though perhaps not its present benign one; the house was described to me by one person who had known it earlier this century as ‘Very spooky, you had to creep in under the cobwebs.’ If it has any ghosts now they are placid and well-fed ones.

The house and garden were opened to the public for the first time during the 1950s, and since then the interest in the composite whole—the mellow, rambling old house surrounded by and merging almost imperceptibly into the informal cottage garden which looks as though it has been established there for centuries rather than for somewhat less than three decades—has increased steadily. More people have come to appreciate the importance of having a garden which is reasonably easy to maintain and at the same time provides colour and interest even in the depths of winter.

Margery Fish would have wanted no other memorial than that fellow enthusiasts should continue to visit and learn from her creation.

When, in 1937, my husband decided there was a likelihood of war, and we made up our minds to buy a house in the country, all our friends thought we’d choose a respectable house in good repair complete with garden, all nicely laid out and ready to walk into.

And when, instead, we chose a poor battered old house that had to be gutted to be livable, and a wilderness instead of a garden, they were really sorry for us. They were particularly sympathetic about the garden. Redoing a house could be fun, but how would two Londoners go about the job of creating a garden from a farmyard and a rubbish heap?

I have never regretted our foolhardiness. Of course, we made mistakes, endless mistakes, but at least they were our own, just as the garden was our own. However imperfect the result there is a certain satisfaction in making a garden that is like no one else’s, and in knowing that you yourself are responsible for every stone and every flower in the place. It is pleasant to know each one of your plants intimately because you have chosen and planted every one of them. In course of time they become real friends, conjuring up pleasant associations of the people who gave them and the gardens they came from.

Walter and I had several things particularly in mind when we made the garden.

The first was that it must be as modest and unpretentious as the house, a cottage garden in fact, with crooked paths and unexpected corners.

Next it must be easy to run. When we bought the house we were living in London, and for the first two years we divided our time between London and Somerset, so our garden had to take care of itself for much of the time. We designed it with the idea that we’d have to look after it ourselves, and though there have been times when we had regular help they were brief and uncertain, and we knew we’d soon be back where so many people are today,
depending on a little casual labour when we can get it.

Since Walter died I have had to simplify it even more, as the garden can only have the odd hours that are left over in a busy life. He made me realize that the aim of all gardeners should be a garden that is always presentable—not a Ruth Draperish garden that has been, or will be, but never is at its best. We don’t apologize for our homes because we keep them garnished regularly as a matter of course and I have never understood why we don’t feel exactly the same about a garden.

Another thing he taught me was that you mustn’t rely on your flowers to make your garden attractive. A good bone structure must come first, with an intelligent use of evergreen plants so that the garden is always clothed, no matter what time of year. Flowers are an added delight, but a good garden is the garden you enjoy looking at even in the depths of winter. There ought never to be a moment when it is not pleasant and interesting. To achieve this means a lot of thought and a lot of work, but it can be done.

The house was long and low, in the shape of an L, built of honey-coloured Somerset stone. At one time it must have been thatched but, unfortunately, that had been discarded long ago and old red tiles used instead. It stood right in the middle of a little Somerset village, and made the corner where a very minor road turned off from the main street. There was only a narrow strip of garden in front, and not very much behind, but we bought an orchard and outbuildings beyond so that we had about two acres in all. A high stone wall screened us from the village street, and there was a cottage and another orchard on the other side.

You can’t make a garden in a hurry, particularly one belonging to an old house. House and garden must look as if they had grown up together and the only way to do this is to live in the house, get the feel of it, and then by degrees the idea of the garden will grow.

We didn’t start work outside for nearly a year, and by that time we felt we belonged to the place and it belonged to us and we had some ideas of what we wanted to do with it.

It was on a warm September day when we first saw the house but it was such a wreck that Walter refused to go further than the hall, in spite of the great jutting chimney that buttressed the front. Then the long roof was patched with corrugated iron, the little front garden was a jungle of rusty old laurels and inside an overpowering smell of creosote, newly applied, fought with the dank, grave-like smell of an unlived in house. ‘Full of dry rot,’ said Walter, ‘not at any price,’ and turned on his heel.

For three months we tried to find what we wanted. We looked at cottages and villas, gaunt Victorian houses perched uneasily on hilltops, and snug little homes wedged in forgotten valleys. Some were too big and most too small, some hadn’t enough garden and others too much. Some were too isolated, others so mixed up with other houses that privacy would have been impossible. We lost our way and had bitter arguments, but we did discover what we didn’t
want. I couldn’t see Walter in a four-roomed cottage with a kitchen tacked on to one end and a bathroom at the other, and I had no intention of landing myself with a barn of a place that would require several servants to keep it clean.

We were still hunting in November when our way took us very near the old house so summarily dismissed in September, so we turned down the lane which said ‘East Lambrook one mile’, just to see what had been happening during those three months.

Quite a lot had happened. The front garden had been cleared of its laurels and the house looked much better. Old tiles had replaced the corrugated iron on the roof, and inside the walls had been washed with cream and the woodwork with glossy paint.

It is one of those typical Somerset houses with a central passage and a door at each end, so very attractive to look at and so very draughty for living. That day we thought only of the artistic angle. It was late afternoon and the sun was nearly setting. Both doors were open and through them we caught a glimpse of a tree and a green background against the sunlight.