All rights reserved. No part of this book may be used or reproduced in any manner whatsoever without written permission of the author or Pelican Ventures, LLC except in the case of brief quotations embodied in critical articles or reviews.

The author is represented by and this book is published in association with the literary agency of WordServe Literary Group, Ltd., www.wordserveliterary.com

eBook editions are licensed for your personal enjoyment only. eBooks may not be re-sold, copied or given away to other people. If you would like to share an eBook edition, please purchase an additional copy for each person you share it with.

Harbourlight Books sail and mast logo is a trademark of Pelican Ventures, LLC

To the memory of my father, Carl Thomas Weise.

Janalyn Voigt is a fresh voice in the realm of fantasy. Her writing is crisp, her verbs muscular, and it’s all wrapped up in a lyrical style. Blending action and romance, DawnSinger is a journey through fear, failure, and faith, and I look forward to its sequel. Eric Wilson, NY Times bestselling author of Valley of Bones and One Step Away

In DawnSinger, Janalyn Voigt has penned a novel full of surprises. With adventure, mystery, and an unlikely romance, this beautiful, epic fantasy debut will leave you scrambling for the next book in the trilogy. Jill Williamson, Christy Award-winning author of By Darkness Hid

DawnSinger is a delightful fantasy spun with bardic prose and threaded with danger and intrigue. Linda Windsor, author of Healer, Thief and Rebel, Brides of Alba Historical Trilogy

Janalyn Voigt builds an exciting world, tranquil on the surface but filled with danger, ancient enemies, and a prophecy yet to be fulfilled. DawnSinger leads you into a land only imagined in dreams. I can’t wait to read the second book in the Tales of Faeraven trilogy. Lisa Grace, bestselling author of the Angel in the Shadows series.

Nicola Martinez, Harbourlight Editor-in-Chief, has given me the rare gift of caring about me as a person first and an author second. Nicola also perfectly captured the mood of my writing in her stunning cover designs. I am grateful for the patience and wisdom of Lisa McCaskill, Fay Lamb, and the other Pelican Book Group editors who assisted with this book. My critique partners at Northwest Christian Writers Association also deserve a mention.
WayFarer
is a better story because of you.

Lisa Dawn, and now Pamela S. Thibodeaux, continue to back up my marketing efforts.

Barbara Scott and Greg Johnson of Wordserve Literary stepped in to help negotiate my contract just when I most needed help. Thanks for making life easier for a new novelist.

My husband, John Voigt, and my children have selflessly supported me as a writer in more ways than I can name. I so appreciate and return their respect.

I rely upon the High One’s guidance and inspiration when writing and must here express my thanks to Him.

A glossary is located in the back of book
.

Kai, personal guardian of the dying lof raelein (high queen) of Faeraven, delivers a summons to Shae of Whellein, a princess he is sworn to protect. Shae believes herself his sister, but Kai knows that she is only bound to him by secrets. At Torindan, high hold of Faeraven, Shae discovers her true identity as Lof Raelein Maeven’s daughter and her calling as DawnSinger of prophecy. Her mother kept her hidden to protect her from an unknown contender who took her father’s life. Maeven asks Shae to sing the ceremonial death song at her funeral. After Shae agrees to do so, she learns such an honor belongs by tradition to Freaer, first musician of Torindan. Freaer both fascinates and frightens Shae because of the intense emotions he arouses in her.

Shae experiences the almost-physical touch of a dark soul. A second, gentler soul touches hers as well. She keeps these encounters and the unexpected visions that visit her quiet, unable to explain to others what she herself doesn’t understand.

Maeven’s health improves, and she seems ready to recover when she is poisoned by Shae’s servant, Chaeldra. Shae also drank the same poison that took Maeven’s life, but she survives because of the knowledge of a tracker, Dorann. Chaeldra has disappeared.

Kai, second son of the royal house of Whellein and voluntary servant to Maeven, must choose whom he will serve after her death. He can pledge his service to Maeven’s son, Elcon, or in the absence of his missing older brother, rule and reign in Whellein. Despite pressure from his parents to come home, Kai makes the difficult choice to pledge fealty to Elcon.

Freaer and three shraens (kings) who break alliance with Faeraven challenge Elcon for the throne at his coronation. Freaer states that Maeven gave him claim to Shae in exchange for the right to sing her death song. When Elcon rejects his words, Freaer and his followers attack and attempt to kidnap Shae. Kai defends Elcon and falls to the sword. Shae cries out to the High One and is able to tap an inner source of light that flares out to lash Freaer. Shae’s kidnappers drop her and flee. Freaer and the three shraens escape.

The DayStar appears in the sky, a sign that the time of prophecy has come. Before it completes its arc of the sky, Shae must travel to the Well of Light and sing a song that will release the DawnKing into Elderland to save it. When Shae asks what song to sing, no one can tell her. Elcon directs Kai to protect Shae on her quest. Wingabeasts (winged horses) carry Shae, Kai, and a small band of protectors through twisting canyon lands where they dodge giant raptors. Large, spidery waevens almost defeat them at a ruined stronghold. In the ruins of Pilaer, an ancient place of defeat for their people, they face their own dark regrets. Goblin—like garns attack them in a dark forest. In a lost wasteland, privation and hardship test them. Through these trials, the company of protectors dwindles.

Kai’s love for Shae changes in nature, and her growing attachment to him creates conflict for them both. Shae rejects her feelings for Kai until they become separated in the Lost Plains and she believes him dead. Grieving and alone, Shae enters the Cavern of Death in a desperate bid to fulfill prophecy, if it is not too late. When her lamp burns out, what seems at first the specter of Kai approaches. After a sweet reunion in which they declare their love, Kai’s spirit sword, Whyst, lights the way to the ancient stairway that winds upward through the rotting heart of the Cavern of Death.

When Kai loses his footing and drops Whyst, Shae has to go on without him, for there is no time to spare and she is able to see by an inner light. At the top of the crumbling stairway, a natural bridge spans the chasm known as the Well of Light. But the bridge terminates at a blank wall of stone rather than at the Gate of Life she expects.

Freaer rides a giant raptor to enter through a breach in the mountain. He tempts Shae to escape with him but can’t approach her while she stands on the bridge because he fears the flames of virtue burning in the chasm. The Gate of Life appears in the rock wall at the end of the bridge. A youth waits within. He identifies himself as the DawnKing and calls for her to come through the gate so that he can enter Elderland in her place. Freaer warns Shae that if she does so, she will never return. Shae wavers, but then cries of the perishing within Elderland carry to her from the Well, and she knows, at last, the song she must sing.

Shae sings her own death song as she steps through the Gate of Life, changing places with the DawnKing. The gateway closes, shutting Shae behind it. As it carries on the wind throughout Elderland, the DawnSinger’s song brings healings.

Emmerich, the youth who calls himself the DawnKing, accompanies Kai and the band of protectors back to Torindan. 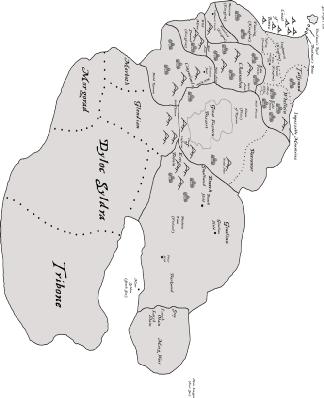 Part One: The Bridegroom

An indrawn breath alerted Kai. Unsheathing his sword, he peered into the shadows beneath a weilo tree’s curling tresses.

“Show yourself!” His challenge rang through the vale.

Kai.
His name sighed in a sudden wind that ruffled the waters of the weild. Morning mists eddied above the river, but the leafy canopy over his head remained still and silent.

Impossible! And yet he knew that voice. “Shae?” With his heart beating in his throat, he pressed forward.

Beneath the weilo a many-hued light shimmered, swirled, and took shape. Shae stood before him, her eyes closed as if in prayer. Her unbound hair cascaded in burnished curls to her waist. Beneath her scarlet cloak, she clutched something at the end of the fine chain encircling her neck. The glint of silverstone between her fingers told him she wore his locket. She opened her eyes and smiled at him. “Kai.”

But he backed away. “Are you some dryad come to enchant me?”

“Please.” She held out her hands imploringly. “Stay.”

“Why should I trust you?”

“You have nothing to fear. It’s me—Shae.”

1808: The Flight of the Emperor by Laurentino Gomes
The Case of the Photo Finish by Carolyn Keene
The Ghost-Eater and Other Stories by Diane Awerbuck, Louis Greenberg
Syren by Angie Sage
The Fifth Script: The Lacey Lockington Series - Book One by Ross H. Spencer
All I Need by Stivali, Karen
Profecías by Michel de Nostradamus
Rain Glade by Carroll, John H.
Seasons in the Sun by Strassel, Kristen
Desirable by Elle Thorne, Shifters Forever