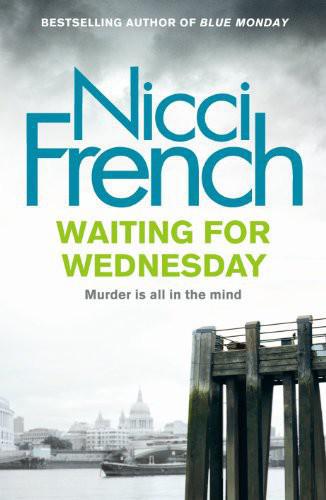 For Pat and John, once more with feeling

There was no sign that anything was wrong. It was just an ordinary terraced house on an ordinary Wednesday afternoon in April. It had a long, narrow garden, like all the other houses in the road. The one to its left had been neglected for many years. It was overgrown with nettles and brambles; at the far end there was a plastic sandpit full of sludgy water and a child-sized goal that had been tipped over. The garden on the other side was paved and gravelled, with plants in terracotta pots, chairs that the owners folded up in winter to store in their shed, and a barbecue under a black tarpaulin that would be wheeled into the centre of the patio for the summer months.

But this particular garden had a lawn, just cut for the first time this year. White blossom shone on an old, twisted apple. The roses and shrubs in the borders had been pruned back so hard that they were like sticks. There were ranks of orange tulips near the kitchen door. There was a single trainer with its laces still done up under the window, empty flower pots, a bird table, with a few seeds scattered on its flat surface, a couple of empty beer bottles by the boot-scraper.

The cat walked up the garden, taking its time and pausing by the door, head lifted as if waiting for something. Then it deftly inserted itself through the cat flap and entered the kitchen, with its tiled floor, its table – big enough for six or more people – and its Welsh dresser, which was really too large for the room and was cluttered with china and odds-and-ends: tubes of dried-out glue, bills in their envelopes, a
cookery book opened at a recipe for monkfish with preserved lemon, a balled pair of socks, a five-pound note, a small hairbrush. Pans hung from a steel rail above the cooker. There was a basket of vegetables near the sink, a dozen more cookery books on a small shelf, a vase of flowers that were beginning to droop on the windowsill, a school textbook open spine-down on the table. On the wall was a whiteboard with a ‘to-do’ list in red felt pen. There was a half-eaten piece of toast, cold, on a plate on one of the surfaces, and a cup of tea beside it.

The cat dipped its head delicately into its bowl on the floor and ate one or two granules of dried cat food, wiped its paw over the side of its face, then continued through the house, out of the kitchen, whose door was always open, past the little lavatory to the left, up the two steps. It sidestepped a broken glass bowl and walked around the leather shoulder-bag lying in the hallway. The bag was upended, its contents scattered over the oak floorboards. Lipstick and face-powder, an opened pack of tissues, car keys, a hairbrush, a small blue diary with a pen attached to it, a packet of paracetamol, a spiral-bound notebook. A bit further on, a black wallet splayed open, a few membership cards dotted around it (AA, British Museum). A framed print from an old Van Gogh exhibition was tipped to one side on the cream wall, and on the floor, its frame cracked, lay a large family portrait: a man, a woman, three children, with broad smiles.

The cat picked its way through the debris and walked into the living room at the front of the house. An arm lay outstretched in the doorway; the hand was plump and firm with nails cut short and a gold band on the fourth finger. The cat sniffed at it, then gave the wrist a cursory lick. It half climbed on to the body, in its sky-blue blouse and its black work trousers, digging its claws purringly into the soft stomach.
Wanting attention, it nuzzled against the head of warm brown hair that was greying now and tied back in a loose knot. There were small gold studs in the ear lobes. There was a thin chain and locket round the neck. The skin smelt of roses and something else. The cat rubbed its body against the face and arched its back.

After a while, it gave up and went to sit on the armchair to wash itself, for its coat was matted now and sticky.

Dora Lennox walked slowly back from school. She was tired. It was Wednesday and she had double science last lesson, then swing band in the after-school club. She played the saxophone – badly, splitting notes, but the music teacher didn’t seem fussy. She had only agreed to go because her friend Cam had persuaded her, but now Cam didn’t seem to be her friend any more, and whispered and giggled with other girls who didn’t have braces, weren’t skinny and shy but bold and curvy, with black lacy bras and shiny lips and bright eyes.

Dora’s rucksack, heavy with books, bumped on her back; her music case swung against her shin; and the plastic carrier bag – bulging with cooking utensils and a tin of scorched scones that she’d made in food tech that morning – was ripped. She was glad to see their car parked near the house. It meant her mother was home. She didn’t like coming back to an empty house, with all the lights off and a grey hush to every room. Her mother put life into things: the dishwasher rumbling, maybe a cake in the oven or at least a tin of biscuits laid out ready for her, the kettle boiling for tea, a sense of ordered bustle that Dora found comforting.

As she opened the gate and walked up the short, tiled garden path, she saw that the front door was open. Had she arrived just after her mother? Or her brother, Ted? She could hear a sound as well, a pulsing electronic sound. As
she got closer she saw that the small frosted-glass window, just to the side of the door, was broken. There was a hole in the glass and it bulged inwards. As she stood looking at the strange sight, she felt something on her leg and looked down. The cat was rubbing against her, and Dora noticed that she had left a rusty stain on her new jeans. She stepped into the house, letting her bags slide to the floor. There were shards of glass from the window on the mat. That would need to be fixed. At least it hadn’t been her. It was probably Ted. He broke things all the time: mugs, glasses, windows. Anything fragile. She could smell something as well. Something burning.

There was more mess on the floor – the big family photograph, her mother’s bag, bits and pieces strewn around. It was as if a storm had blown through the house, dislodging objects and tossing them about. Dora briefly saw her reflection in the mirror that hung above the table: small white face, thin brown plaits. She walked through to the kitchen where the smell was strongest. She opened the door of the oven and smoke poured out like a hot breath, making her cough. She took an oven glove, lifted the baking tray from the top shelf and put it on top of the stove. There were six charred, shrunken black discs on the tray. Utterly ruined. Her mother sometimes made biscuits for her after school. Dora closed the door and switched off the gas. Yes, that was it. The oven had been left on and the biscuits had burned. The alarm and the smoke had scared Mimi and she had run around breaking things. But why had the biscuits burned?

She called out again. She saw the fist on the floor in the doorway, fingers curled, but still she went on calling, not moving. ‘Mum, I’m home!’

She walked back out into the hall, still calling. The door to
the front room was slightly open. She saw something inside, pushed against the door and stepped into the room.

At first, stupidly, she saw splashes of red paint on the far wall and the sofa and great daubs of it on the floor. Then her hand flew to her mouth and she heard a small moan coming up her throat, then widening out in the terrible room, becoming a shriek that went on and on and wouldn’t stop. She put her hands against her ears to block out the sound but now it was inside her. Not paint, but blood, streams of blood and then a dark, dark lake near the thing lying at her feet. An arm out-flung, a watch on the wrist that still told the time, a comfortable body in a blue shirt and black trousers, one shoe half off. All that she knew. But the face wasn’t a face any longer, because one of its eyes was gone and its mouth was shattered and shouted noiselessly at her through a spit of broken teeth. One entire side of the head was caved in and blistered with blood and gristle and bone, as if someone had tried to destroy it.

Where the Wind Whispers (Seasons of Betrayal Book 3) by Bethany-Kris, London Miller
Lord John and the Private Matter by Diana Gabaldon
Rise of the Federation: Live by the Code by Christopher L. Bennett
Her Father's Daughter by Marie Sizun
Bonner Incident by Thomas A Watson, Michael L Rider
Flash Point (Kilgore Fire Book 2) by Lani Lynn Vale
Icefall (Dane Maddock Adventures) by David Wood
Thief: A Fantasy Hardboiled (Ratcatchers Book 2) by Matthew Colville
In Her Day by Rita Mae Brown
I Know Why the Caged Bird Sings by Maya Angelou