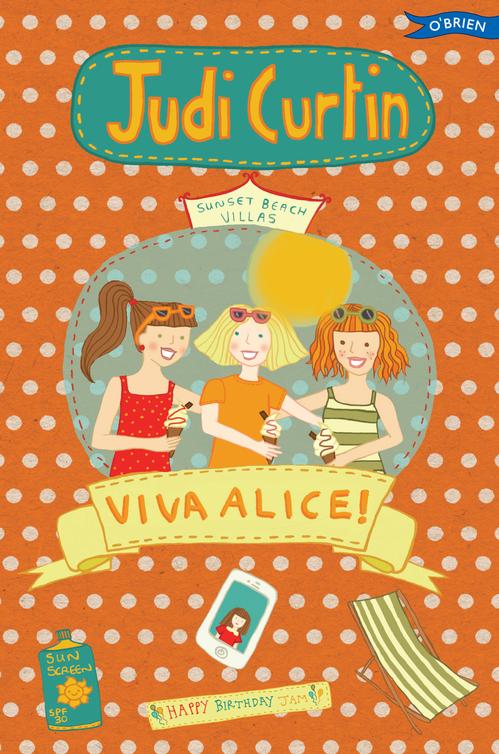 Praise for the ‘Alice & Megan’ series

‘Girls and boys will warm to Judi Curtin’s funny stories about friendship’,
The Sunday Independent 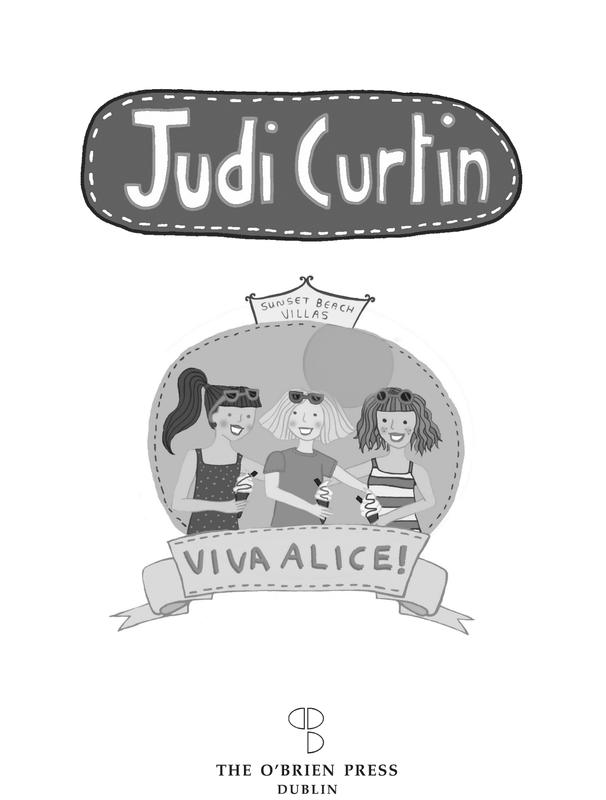 For Dan, Brian, Ellen and Annie.

Big thanks to everyone at The O’Brien Press for their continuing support and enthusiasm. Extra-big thanks to super-editor Helen Carr – once again, you’ve been great. 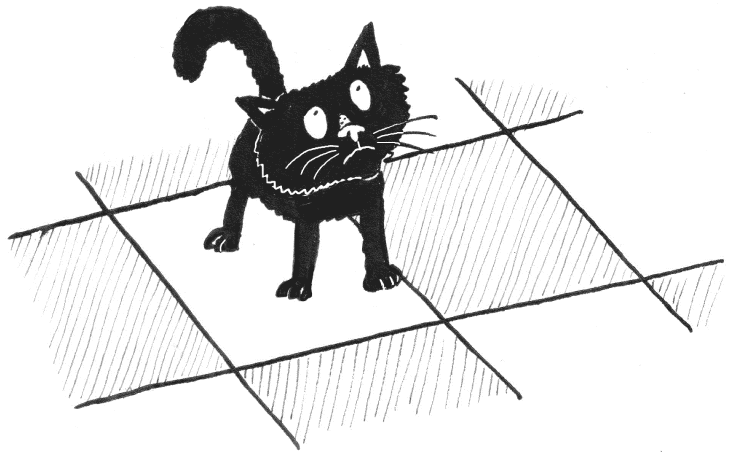 ‘O
migod, Megan. You’ve got to come over to my place right now,’ said Alice, racing into the kitchen and grabbing my arm. ‘It’s an emergency.’

Mum looked up from the bundle of broccoli she was washing.

‘I don’t care if it’s an emergency, Megan,’ she said. ‘You’re not going anywhere until you finish your porridge.’

Mum has known my best friend for thirteen years. I guess she understands that Alice has drama queen moments. I shovelled the last few spoons of porridge into my mouth, and got up
from the table.

‘Dishwasher,’ said Mum, without even looking up.

I sighed and put my bowl into the dishwasher. My cat, who was curled up in the corner of the kitchen, looked up at me mournfully.

‘Sorry, Domino,’ I said. ‘No time for cuddles. Didn’t you hear? This is an emergency.’

Domino put on her best sulky-cat face and went back to cleaning her paws as I followed Alice outside.

I raised one eyebrow and Alice giggled. ‘OK, so she’s gone even crazier than usual.’

‘What’s she done
this
time?’ I asked.

‘What’s crazy about that?’

‘She’s invited half the kids in his class, and …’

‘And she wants to have the party in our apartment.’

Alice’s voice was all weird when she said the last words, and I couldn’t decide if she was trying not to laugh, or trying not to cry. Maybe it was a bit of both.

‘Nope. Like I said, my mum’s finally slipped over the edge. She’s officially gone crazy.’

I thought about arguing with her, but I couldn’t do it. It
did
sound like Alice’s mum had lost it. For most mums, having a party in your own apartment wouldn’t be a big deal. Alice’s mum isn’t like most mums, though. Her apartment is all white and shiny and perfect. Things like a crumb on the floor or a greasy handprint on a wall are like major disasters as
far as she is concerned.

When Alice was little, she was never allowed to have her parties at home – they always had to be in cinemas or restaurants or activity centres.

‘But I don’t understand,’ I said. ‘Doesn’t your mum know that Jamie’s friends will trash the apartment? That’s going to drive her crazy.’

‘I tried telling her, but she won’t listen to me. Ever since I fell out of the tree and ended up in hospital, Mum’s been acting really weird. She says she feels guilty about what happened, and that she should have been a better mother to Jamie and me. She says that from now on, she’s going to be a “hands-on” mum. It’s going to end in tears, I just know it.’

Once again, I couldn’t argue. Trying to be a better person is probably a good thing, but didn’t Veronica understand that it couldn’t happen overnight? There’s no such thing as an instant personality transplant – if there was, I’d book my mum in for one.

‘OK, Alice,’ I said. ‘For once, I have to agree with you. I think this might well be an emergency. We’d better go over to your place and see how bad things are.’

Alice’s mum, Veronica, was sitting at the kitchen table. Her hair was all messy and her usually perfect nails were all chipped and broken, like she’d been chewing them.

She was flipping madly through a pile of pages she’d printed from the computer.

‘Second best won’t do,’ she muttered. ‘This party just
has
to be perfect.’

‘Do something, Megan,’ whispered Alice. ‘Please.’

I’ve always been a bit afraid of Veronica, but I knew I had to be brave.

‘Er, Veronica,’ I said. ‘Maybe you need to rethink this whole party thing. Boys of Jamie’s age can be a bit wild sometimes. Maybe it would be better if you––’

Veronica looked up at me with a scary look in her eyes. ‘It’s a bit too late for rethinking,’ she said. ‘I hand-delivered the invitations last night. No matter what happens, the party is going ahead tomorrow.’

I gulped. ‘Tomorrow? Are you sure that’s a good idea?’

Veronica gave a crazy laugh. ‘Why ever not? Your mother always has lovely parties for you and Rosie. How hard can it be?’

My mum always starts planning our parties weeks in advance.

And she likes being around small kids.

And she likes cooking.

And she doesn’t care if our house gets trashed.

I was wondering how to answer Veronica, when I realised it didn’t matter what I said. Veronica had already forgotten about me. She’d gone back to studying her printouts, and she was adding notes to a very long list.

I knew it was time for damage limitation.

‘Maybe Alice and I could help you,’ I said. ‘I could even ask my mum to come over for a bit. She actually likes organising parties and she’s quite good at it. I know she’d be glad to––’

‘No,’ said Veronica in a high-pitched voice, like I’d just offered to stab her or something. ‘No need to involve your mother in this. Thank you anyway, Megan, but everything is under control. Leave it to me – Jamie is going to have a party he will
never
forget.’ 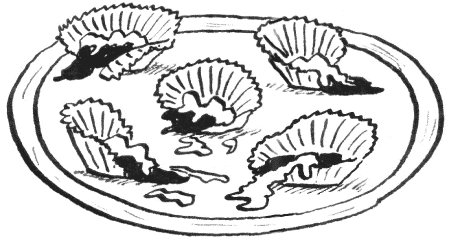 T
he next day, Mum wouldn’t let me go out until I’d done my history project on medieval castles. It took ages and ages and every time I thought it was finished, Mum thought of something else I should include.

‘I’ve got a great idea,’ she said, when I finally closed up my folder. ‘When you’re making your presentation, why don’t you dress up as a girl from medieval times? I’ve got some lovely material you could use to make a dress. You just wait here while I go and ……’

Before she’d finished her sentence, she jumped up and ran out of the room. By the time I caught up with her, she was halfway up the ladder into the attic.

‘Mum!’ I wailed. ‘I’m not in primary school
any more. If I dress up, everyone will just laugh at me.’

She came back down the ladder. ‘I was only trying to help,’ she said.

‘We could make you a medieval headdress,’ she said. ‘That wouldn’t take long, and you’d look absolutely beautiful with a––’

She stopped arguing then. She doesn’t really know what a loser is, but I guess she knows it’s not a good thing.

‘Thanks for your help,’ I said again. ‘Now I really, really need to go. Alice needs me.’

Mum hugged me, and finally I was free to leave.

Alice’s face was white when she met me at the door.

‘Don’t say anything,’ she said, as she led me inside.

Veronica’s normally perfect apartment was a total mess. Limp balloons and tangled streamers hung from every corner. A big banner hung over the living room door. I read the words aloud – ‘
HAPPY BIRTHDAY JAM
’. Alice gave a hysterical giggle. ‘The printer ran out of ink before it was finished,’ she said. ‘I thought about going to the shop to get more ink, but in the end I didn’t dare. I was afraid to leave Mum on her own.’

I turned to look at the dining area. Every single surface was covered with dishes of weird-looking food.

‘It’s a total disaster,’ whispered Alice. ‘Nothing went right. The popcorn didn’t pop, the jelly didn’t set, the cupcakes sank and the birthday cake … it’s meant to be an aeroplane but …’

She pointed at the birthday cake and didn’t
say any more. She didn’t need to.

If you looked
very
carefully, you could see that it was meant to be a plane – but it looked like one that had crash-landed from a long way up. A wing and a wheel had fallen off, and the front was all smashed up. Chocolate icing dripped down one side, and was spreading slowly across the table like lumpy brown lava. It was like something out of a very bad horror movie – the kind my mum doesn’t let me watch.

In the corner of the room, Alice’s brother, Jamie, was curled up on a chair, flicking through the pages of a book about wizards. Usually he’s a bit wild, but now he just looked sad and miserable. I felt sorry for him.

‘He’s only little,’ whispered Alice. ‘But even he knows that this is shaping up to be the worst party in the history of the world. You’ve got to help us, Megan. You’ve just got to.’

Before I could answer, the doorbell rang and Veronica appeared from the bedroom. She
looked wild and crazy.

‘They’re here!’ she said in the high-pitched voice that scared me so much. ‘The guests are here.’

Then she tottered towards the door, almost falling on her super-high heels.

I thought about going to hide under Alice’s bed until the whole thing was over, but I knew I couldn’t do that. My friend needed me – so it was a pity that I had
no
idea how I was going to help her.