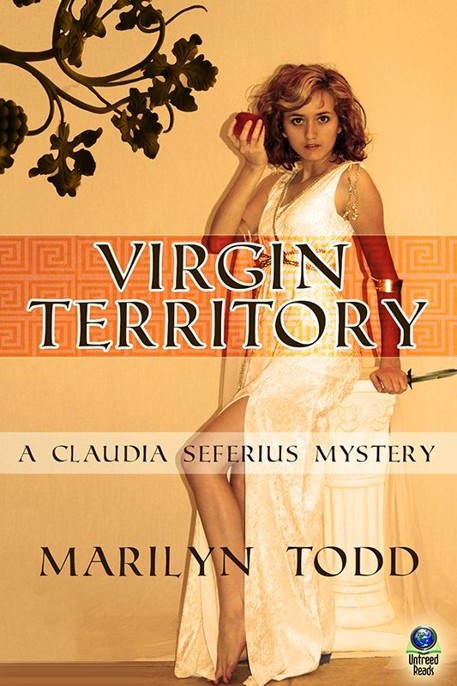 This ebook is licensed for your personal enjoyment only. This ebook may not be resold, reproduced or transmitted by any means in any form or given away to other people without specific permission from the author and/or publisher. If you would like to share this book with another person, please purchase an additional copy for each person you share it with. If you’re reading this book and did not purchase it, or it was not purchased for your use only, then please return to your ebook retailer and purchase your own copy. Thank you for respecting the hard work of this author.

This is a work of fiction. Any resemblance to the living or dead is entirely coincidental.

‘A timeless heroine for today—you’ll be hooked.’
Company

‘The Roman detail is deft, the pace as fast as a champion gladiator, and the heroine, Claudia, an arrogant superbitch who keeps us all on the edge where she loves to live.’
Sunday Express

‘A wonderful fictional creation—a bawdy superbitch with a talent for sleuthing... an enormous triumph.’
Ms London

‘An endearing adventuress who regards mortal danger as just another bawdy challenge.’
She

‘If you’re looking for a romp through the streets of Rome in 13 BC then this is the book to buy!’
Books Magazine

‘Terrific read... It is written in a contemporary, fast style, and is a thoroughly entertaining mystery romp.’
The Bookseller

‘A daring debut from a promising writer.’
Oxford Times

It wasn’t his fault. Captain Herrenius hardly knew her. How could he possibly predict that, despite keening winds and raging seas, no amount of persuasion would winkle this beautiful young creature from her niche in the prow?

‘It’s for your own safety,’ he urged, and the lack of response threw him. He was sure his voice had carried above the clamour of his crew, the crash of the waves. ‘You’ll be more comfortable in your cabin.’

He couldn’t mean that dingy mop-hole where she slept? Bilge rats had better bunks. ‘Don’t be ridiculous.’ When there were problems to be faced, there was only one way Claudia Seferius tackled them. Head on. Besides, storm or no storm, she had no intention of being bundled out of the way like a redundant artifact.

But her words had been carried into the churning Ionian, and all Herrenius could make out was a quivering mass of dark curls as she drew her cloak even tighter. Scared, was she?

‘Don’t worry, m’dear, I’ll look after you,’ he said—only this time he found himself on the receiving end of a glare capable of cracking walnuts at fifty paces. Checking that the water cask was secure, he wondered whether, given time, he would ever understand women.

As the ship rolled to starboard, Claudia’s cloak went skimming down her back to form a black heap on the boards. For one ghastly heart-stopping moment, she could see nothing but the liquid marble of the water, then the ship righted itself. She snatched up her wayward garment. It was made of goat’s hair, favoured for its resistance to salt water, and as she shook the dirt off this old workhorse, she had a feeling it was about to be put through its paces. Spume was being whipped up like egg white.

Noting the set of her chin and never one to admit defeat, the
Furrina’s
captain inched closer. Young girl alone on the seas, needed looking after, what? He cleared his throat. Charming filly and no mistake. Needed a man, though. A strong, capable man to help her weather the storm. A man with—what was the word?—experience, that was it.

Inching closer, he caught the heavy scent of her perfume and felt a stirring in his loins as he remembered her at the stern rail yesterday, the breeze ruffling her hair and flattening her tunic against the outline of her body. Fully aroused at the memory of those taut, high breasts, the points of her nipples, the curve of her belly, the sweep of her thighs, Herrenius nevertheless waited until the ship gave another violent lurch before making his move.

‘Take your paws off me, you odious little greaseball!’

To his credit, the captain’s expression didn’t alter as his fingers unlaced themselves from her waist. Stuck-up bitch, he thought, but it was with immense care that his hands remained firmly clasped behind his back as he made his way aft as nonchalantly as he was able.

‘Come by the boat!’ he snapped, and the bosun looked up sharply. The jolly had been hoisted aboard this half-hour past. But he knew that mood, and to avoid being put on a charge, tossed another anchor over the side. That still left three, didn’t it?

Claudia snapped her fingers and the limp form of Junius, the head of her personal bodyguard, made a manful effort to straighten up from where it was hanging over the rail. Interesting colour formation, she thought. White for the main part, tinged with a spot of green here and a spot of grey there, and a teensy bit of purple round the eyes.

‘Junius, if you ever let that scumbag Herrenius within one pace of me again, I’ll have you dangled from the masthead by your toes. Understood?’

The look he gave her was that of a whipped and starving puppy who’d just learned he was about to become the ball in a game of Countrymen, but it was wasted on Claudia. The storm had all her attention.

The sky, staggering under its watery burden, bent lower and lower over the foaming waters, dragging the horizon closer by the minute. Cedarwood timbers groaned so loudly even the roar of the wind couldn’t compete. With each roll of the sea, each sickening lurch, the rope ladder slapped against the protesting mainmast. Someone ought to secure it, she thought. But they were too busy.

More and more men were put to control the two monstrous steering oars, but work was impeded by the presence of both deckhouse and sternpost. The extra men were only getting in one another’s way. The gale lifted a clay tile from the galley roof and sent it crashing into red shards on the deck below. Claudia glanced at the cliffs looming towards her and assured herself everything was in hand, Herrenius knew what he was doing. She repeated it three times before she began to believe it, but you had to have faith in someone on this little tub. The foresail was in and the big squaresail nearly brailed up now, and she had to hand it to these boys. Every time the vessel heaved, over they swung, fifty feet up and thirty feet out with only a loin cloth for protection. One missed footing and they were, to use their own expression, monster bait.

Claptrap, of course. Hadn’t she seen with her own eyes the spot where, if the whirlpool Charybdis didn’t suck down ships, six-headed Scylla thrashed them into splinters? Perfectly ordinary waters! All right, maybe the current was a
little
fast, but nowhere near sufficient to make the prospect of navigating one small stretch of choppy water turn strong men into mumbling wrecks. All that chanting and anti-evil-eye stuff! Pathetic.

They blamed Claudia for this easterly. Not in so many words (they wouldn’t dare) but in September these straits were blessed with westerlies, calm and pleasant and a veritable joy to sail. This, she had been assured time and again, was fact. So why, then, had the Tempestates been unleashed by the gods to wreak mayhem and havoc?

Drusilla, it transpired, was the key.

Suddenly the keel was thrown high out of the water, sending Claudia crashing against the side of the ship. She clung desperately to a ratline as the freighter wavered, as though skewered on Neptune’s trident, before pitching forward with a spine-jarring shudder. Another check at the cliffs. This is not a good place for a shipwreck, she thought. Definitely not.

She licked the ropeburns on her palms and thought of Drusilla. It was a rough ride, she hoped she was coping. Poor Drusilla. She didn’t deserve the crew’s hostility but, for some obscure reason, the presence on board of one small Egyptian cat with blue eyes and a wedge-shaped face had turned the entire contingent into gibbering, superstitious shadows of themselves. It had now reached the stage where two of her bodyguard—big, black Nubians, the toughest she could find—were permanently stationed outside the cabin door.

A mischievous gleam twinkled in Claudia’s eyes as she wondered how the crew would react to the announcement that, as of this morning, there was still one small Egyptian cat with blue eyes and a wedge-shaped face…but with the addition of four tiny replicas.

The impending storm and the prejudice of the men had not, it seemed, deterred Drusilla from the practicalities of motherhood.

The long-threatened rain began to lash Claudia’s cheek and, gripping the rail with one hand, she tucked flyaway curls under her collar with the other. That letter, she thought, was a godsend. An absolute godsend.

It had seemed the answer to her prayers when, five weeks ago to the day, she inherited from fat, old Gaius his entire fortune. Now Roman law might not insist a man divide his estate among his natural children in preference to his third wife, but it was pretty well accepted practice. Fortunately her husband, may he rest in peace, had swallowed every baited hook—and the whole lot had come straight to his twenty-four-year-old widow rather than to his daughter, Flavia. Every single copper quadran. Except…

How on earth was Claudia supposed to know Gaius’s fortune was tied up in property? Did he discuss his business? Did he confide in her? Did he ever so much as mention money to her? Did he hell! Instead of inheriting a shining pile of gold pieces there for the spending, Claudia was lumbered with a bloody great house in Rome, a vineyard and villa in the middle of nowhere and a wine merchant’s business that she knew bog-all about and cared even less for. It simply wasn’t fair. You marry a man for his money and he leaves you with this to sort out!

What Claudia Seferius knew about viniculture could be written on the back of…well, a vine leaf. I mean, what was there to know? Vines have thick, twisty stems, they throw out dark green leaves and lots of twiddly bits and at some stage they produce bunches of grapes to be picked by slaves who then trample them around in some buckety thing. Frankly, what happened between that and the filling of her glass was of no interest whatsoever. Yet within days of her husband’s funeral, Claudia had been swamped. Buyers to meet, contracts to honour, shipping to arrange—there was no end to it. Pricing, irrigation, pruning, manuring, it was enough to make a girl’s head spin and there was only one solution, really there was. The races.

There was a cry from the shrouds and a collective howl rose up from the men. Claudia spun round. A black rock rose high and jagged. White water seethed round it, breakers crashed into it. Over it. In the pellucid flash of Jupiter’s thunderbolt, each menacing spike showed clear, beckoning, beckoning…

Ways of Going Home: A Novel by Alejandro Zambra, Megan McDowell
Bear Necessities (Bad Boy Alphas): A Post-Apocalyptic Bear Shifter Romance by Selena Kitt
The Half-Stitched Amish Quilting Club - 02 - The Tattered Quilt by Wanda E. Brunstetter
The Eternity Cure by Julie Kagawa
Thirteen Plus One by Lauren Myracle
The Mammoth Book of the West by Jon E. Lewis
The Last Debate by Jim Lehrer
Pack Law by Lorie O'Clare
This Summer by Katlyn Duncan
Hunting the Jackal by Glass, Seressia