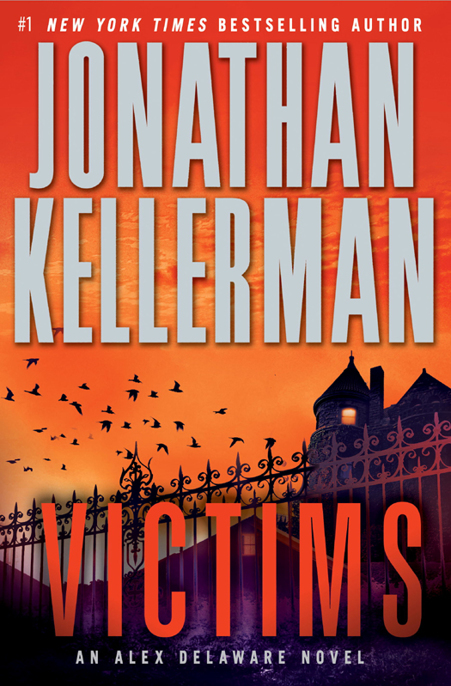 FOR CHILDREN, WRITTEN AND ILLUSTRATED

Victims
is a work of fiction. Names, characters, places, and incidents are the products of the author’s imagination or are used fictitiously. Any resemblance to actual events, locales, or persons, living or dead, is entirely coincidental.

BALLANTINE and colophon are registered trademarks of Random House, Inc.

T
his one was different.

Something I need you to see, Alex. Here’s the address
.

An hour later, I was showing I.D. to the uniform guarding the tape. He winced. “Up there, Doctor.” Pointing to the second story of a sky-blue duplex trimmed in chocolate-brown, he dropped a hand to his Sam Browne belt, as if ready for self-defense.

Nice older building, the classic Cal-Spanish architecture, but the color was wrong. So was the silence of the street, sawhorsed at both ends. Three squad cars and a liver-colored LTD were parked haphazardly across the asphalt. No crime lab vans or coroner’s vehicles had arrived, yet.

The uniform said, “There’s probably a better word for it but that works.”

Milo stood on the landing outside the door doing nothing.

No cigar-smoking or jotting in his pad or grumbling orders. Feet planted, arms at his sides, he stared at some faraway galaxy.

His blue nylon windbreaker bounced sunlight at strange angles. His black hair was limp, his pitted face the color and texture of cottage cheese past its prime. A white shirt had wrinkled to crepe. Wheat-colored cords had slipped beneath his paunch. His tie was a sad shred of poly.

He looked as if he’d dressed wearing a blindfold.

As I climbed the stairs, he didn’t acknowledge me.

When I was six steps away, he said, “You made good time.”

“Including you.” He handed me gloves and paper booties.

I held the door for him. He stayed outside.

The woman was at the rear of the apartment’s front room, flat on her back. The kitchen behind her was empty, counters bare, an old avocado-colored fridge free of photos or magnets or mementos.

Two doors to the left were shut and yellow-taped. I took that as a
Keep Out
. Drapes were drawn over every window. Fluorescent lighting in the kitchen supplied a nasty pseudo-dawn.

The woman’s head was twisted sharply to the right. A swollen tongue hung between slack, bloated lips.

Limp neck. A grotesque position some coroner might label “incompatible with life.”

Big woman, broad at the shoulders and the hips. Late fifties to early sixties, with an aggressive chin and short, coarse gray hair. Brown sweatpants covered her below the waist. Her feet were bare. Unpolished toenails were clipped short. Grubby soles said bare feet at home was the default.

Above the waistband of the sweats was what remained of a bare
torso. Her abdomen had been sliced horizontally below the navel in a crude approximation of a C-section. A vertical slit crossed the lateral incision at the center, creating a star-shaped wound.

The damage brought to mind one of those hard-rubber change purses that relies on surface tension to protect the goodies. Squeeze to create a stellate opening, then reach in and scoop.

The yield from this receptacle was a necklace of intestines placed below the woman’s neckline and arranged like a fashionista’s puffy scarf. One end terminated at her right clavicle. Bilious streaks ran down her right breast and onto her rib cage. The rest of her viscera had been pulled down into a heap and left near her left hip.

The pile rested atop a once-white towel folded double. Below that was a larger maroon towel spread neatly. Four other expanses of terry cloth formed a makeshift tarp that shielded beige wall-to-wall carpeting from biochemical insult. The towels had been arranged precisely, edges overlapping evenly for about an inch. Near the woman’s right hip was a pale blue T-shirt, also folded. Spotless.

Doubling the white towel had succeeded in soaking up a good deal of body fluid, but some had leaked into the maroon under-layer. The smell would’ve been bad enough without the initial stages of decomp.

One of the towels beneath the body bore lettering. Silver bath sheet embroidered
Vita
in white.

Latin or Italian for “life.” Some monster’s notion of irony?

The intestines were green-brown splotched pink in spots, black in others. Matte finish to the casing, some puckering that said they’d been drying for a while. The apartment was cool, a good ten degrees below the pleasant spring weather outside. The rattle of a wheezy A.C. unit in one of the living room windows was inescapable once I noticed it. Noisy apparatus, rusty at the bolts, but efficient enough to leach moisture from the air and slow down the rot.

But rot is inevitable and the woman’s color wasn’t anything you’d see outside a morgue.

I bent to inspect the wounds. Both slashes were confident swoops unmarred by obvious hesitation marks, shearing smoothly through layers of skin, subcutaneous fat, diaphragmatic muscle.

No abrasions around the genital area and surprisingly little blood for so much brutality. No spatter or spurt or castoff or evidence of a struggle. All those towels; horribly compulsive.

Extremely sharp blade, probably not serrated. The neck-twist had killed her quickly and she’d been dead during the surgery, the ultimate anesthesia. The killer had stalked her with enough thoroughness to know he’d have her to himself for a while. Once attaining total control, he’d gone about choreographing: laying out the towels, tucking and aligning, achieving a pleasing symmetry. Then he’d laid her down, removed her T-shirt, careful to keep it clean.

Standing back, he’d inspected his prep work. Time for the blade.

Then the real fun: anatomical exploration.

Despite the butchery and the hideous set of her neck, she looked peaceful. For some reason, that made what had been done to her worse.

I scanned the rest of the room. No damage to the front door or any other sign of forced entry. Bare beige walls backed cheap upholstered furniture covered in a puckered ocher fabric that aped brocade but fell short. White ceramic beehive lamps looked as if they’d shatter under a finger-snap.

The dining area was set up with a card table and two folding chairs. A brown cardboard take-out pizza box sat on the table. Someone—probably Milo—had placed a yellow plastic evidence marker nearby. That made me take a closer look.

No brand name on the box, just
PIZZA!
in exuberant red cursive above the caricature of a portly mustachioed chef. Curls of smaller lettering swarmed around the chef’s fleshy grin.