Read Until the Celebration Online 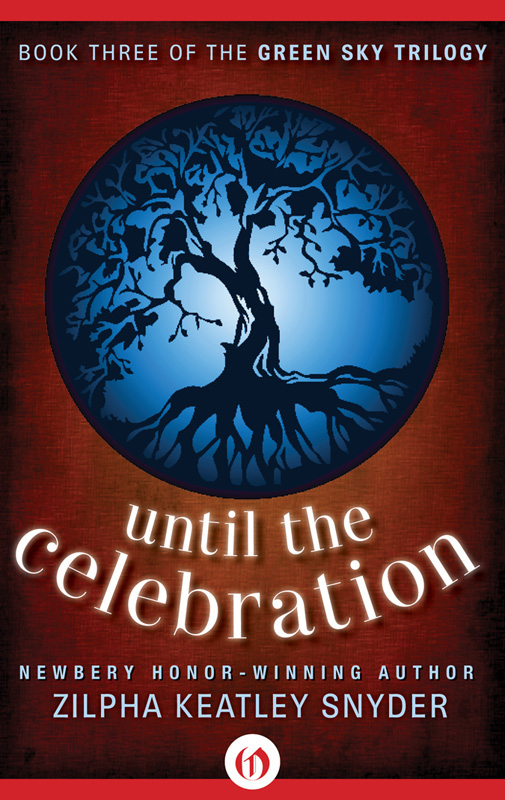 A Biography of Zilpha Keatley Snyder

The
KINDAR
the people of Green-sky, gentle and passive and directed in all things by—

The
OL-ZHAAN
revered and worshipped as holy beings, gifted with great wisdom and Spirit-force, but in reality only human and ignorant of the existence of—

The
GEETS-KEL
a secret and select inner society of Ol-zhaan, who for generations had kept the secret of the true nature of—

The
PASH-SHAN
monstrous creatures who lived imprisoned below the barrier Root, but who were, in reality, only—

Neric D’akt
—rebellious young Ol-zhaan whose suspicions led to the search for the truth about the Pash-shan.

D’ol Falla
—the ancient and honored Ol-zhaan whose searching Spirit led her to join the young rebels.

Axon Befal
—leader of the Nekom, an Erdling society dedicated to vengeance.

U
NIFORCE WAS DEAD. IT
was a sad truth that had been accepted for generations, along with the certainty that all of the gifts of the Spirit were waning. Even such birthright gifts as pensing had long been limited to the very young. Infants born, as Kindar had always been, with the ability to communicate freely beyond the use of voice, seldom reached their sixth year with even a trace of Spirit-skill. And uniforce, always rare and unpredictable, had become no more than a legend.

But then, as the powerful D’ol Regle had turned towards an ancient tool-of-violence to threaten his opponents, two captive children had stretched out their hands and a great force was released. Before the eyes of the secret society, the Geets-kel, the ugly metal instrument—blunt-snouted, heavy—in its gleaming mass and in the dread weight of its purpose, rose from the table as lightly as a mist-borne blossom on a morning breeze. As the weapon sank gently down to rest at the children’s feet, someone breathed the word “uniforce,” and another repeated it, and then the Geets-kel were on their feet, their arms outstretched in the Kindar gesture of reverence.

S
INCE EARLY CHILDHOOD, THE
farheights had been Raamo’s refuge in times of mind-pain, and in the evening of the day that came to be called the Rejoyning, he climbed far and fast. Far above temples and nid-places, rampways and ladders, he pushed his way upward with almost frantic haste, through clustered end-branches and sun-stunted webbings of tendril. At last he stopped in the swaying fragile endgrowth and fashioned a resting place of leaf and twig. Lying there with only a lacy fan of rooftree frond between him and the endless sky, he stilled his racing mind and sent his Spirit in search of Peace and understanding.

The day was already fading, and the clouds of first rain were beginning to gather. Soon the soft gray blanket would be complete, and the planet would be shut away from the cold eternity of space, enclosed and comforted by soothing rain-song, warm and light and generous in gifts of growth and greening. It was a time and place of Joy and peacefulness, and, as always, Raamo joyed in the high, clear silence and the fragile hopeful reach of the high forest. But this time the Joy was not deep enough to drown the fear that he had fled.

The fear had begun only a short time before, there on the stage of the Geets-kel’s secret meeting chamber, at a moment when all the others were still caught up in a great wave of hope and faith. The scene returned to Raamo with such vividness that it blotted out the sky; and when he closed his eyes against it, it continued, a clear and detailed imaging against the dark curtain of his eyelids.

He saw the children, as he had seen them there, bound and helpless, against the far wall of the high stage—his sister Pomma, great-eyed and fragile, and the sturdy, vivid Erdling child, Teera Eld. He saw their outstretched hands and felt again the great rushing force that had lifted the ancient weapon from where it lay and sent it drifting through the air. And he felt once more the wonder and awe, and the wildly contagious surge of courage and hope, as the Geets-kel had one by one stepped forward to pledge themselves to the cause of truth.

It had been one of the Geets-kel, the old man D’ol Wassou, who had spoken first. “I have seen a miracle,” he said, “and to me, its meaning is clear. I wish to pledge myself to the reuniting of the people of Green-sky, Kindar with Erdling, and to the wisdom of D’ol Falla and the vision of D’ol Raamo. And to the great gift that has been restored to us by these children—one Erdling and one Kindar—both Spirit-blessed and holy, as once we all were, in the early days before a part of us was shut away to live in prison, below the Root.”

Then others among the Geets-kel came forward to speak, naming Pomma and Teera beautiful and blessed and holy. And many spoke also of Raamo, praising him and calling him prophet and seer.

It had been D’ol Birta who spoke of the “Answer Song,” calling it a true prophecy, and of Raamo himself, as a foreseer, akin to the ancient prophets who had guided the people in the early days.

Remembering how he had sung the song, a nonsense chant of children, in hopeless desperation because no other answer had come to him when D’ol Falla had begged him for a foretelling, he flinched with anguish. He could see now how it might seem a foretelling. The words could have many meanings:

And all between becomes among,

And we are they and old is young,

And earth is sky,

And all is one.

And yet, he knew that he had not sung it as a revelation, but only as children had sung it for generations—haunted by its surprising rhythms and by the mysterious uncertainties of its meaning.

The memory was acutely disturbing, as was also the memory of the children, still standing against the tendril-woven wall, with the tool-of-violence at their feet—their small faces tensed by a strange bright excitement as they listened to the words of praise and adoration.

But then Kanna, the mother of Teera, had gone to them, and Raamo had run to Pomma. Loosened from their bonds and held and caressed, they had clung like infants, whimpering with relief and Joy.

It was then that Hiro D’anhk had stepped forward and suggested a ceremony of welcome be made for the Erdlings—for Teera and for Karma and Herd, also. The Geets-kel agreed eagerly, and so the ceremony was made, and then the planning had begun—plans for the Rejoyning, a name given by D’ol Falla to this time of truth and reunion—and great change. It had been decided that the changes would begin at once, on the morning of the next day, when the truth would be taken to the leaders of the Kindar.

It had been D’ol Falla who insisted that the Kindar be told first. It had seemed to the others, and in the beginning, even to Raamo himself, that the first meeting should be with the Ol-zhaan. Such an ordering seemed not only proper, but prudent—for although the Ol-zhaan were not, as the Kindar believed, all-wise and all-powerful, they were trained for leadership and far better equipped by knowledge and background to deal with the problems that were sure to lay ahead. But D’ol Falla had insisted that the first meeting should be with guild and grandmasters, scholars and instructors, with those who were most honored and respected within the Kindar society. And D’ol Falla had prevailed.

Remembering how she had prevailed, Raamo smiled, forgetting his anxiety for the moment, in his Love and admiration for the tiny ancient woman. Truly, she had not reached her high position among the Ol-zhaan by accident. Using the force of the Geets-kel’s newfound faith and blending it skillfully with the old established authority of her high position, she had led them to a reluctant agreement. That very evening the summons would be sent to the Kindar leaders, and in the morning the truthtelling would take place in the great meeting hall of Orbora.

It had been then, when those final plans were made, that Raamo had first noticed the faces of some of the men and women of the Geets-kel stiffen with fear. They had turned in those moments from the ecstasy of their faith in the miracle they had witnessed to the grim possibilities of its consequences. From their faith in the power that had flowed from the children—to the fact that they, themselves, must stand revealed as deceivers and betrayers. It was not until then, reminded by thoughts of guilt and blame, that they had remembered D’ol Regle, and seen that he was gone.

Raamo had not seen him go, nor had anyone else. Sometime before, probably during the ceremony of welcome, the novice-master must have slipped behind the tapestries at the rear of the stage, through the small robing room that lay behind it, and out into the open forest. But after a brief moment of shocked indignation, most of the Geets-kel seemed to believe that D’ol Regle’s disappearance was of little consequence.

“What does it matter?” someone had asked.

But Raamo was afraid. His fear had grown at D’ol Regle’s disappearance, but it had begun earlier. It had started as a dim and distant warning, a sense of turnings being made down dangerous pathways, and of pitfalls that lay ahead full of dangers and horrors beyond imagining. As the first hints of fear had grasped him, Raamo had looked around him, searching the faces and the minds of those who stood with him on the high stage—the others who, with him, had begun the changes—to see if they, too, sensed the dangers.

He looked from face to face—from Neric to Genaa, to Hiro to D’ol Falla, and to the Erdlings, Kanna and Herd—and he saw that they were worried and fearful, but also proud and joyous. And he saw that their fear was not the same as his.

He knew then that his fear arose, in part, from a strange vague beckoning that told him it was his task to find and confront a great danger. D’ol Falla had always insisted that he was meant to be a Spirit-messenger, a foreteller, but he had always doubted. Now this inner beckoning seemed to tell him he was destined to some purposing as yet far beyond his understanding, and he found himself resisting, not with doubt, but with terror. He did not know what he would be required to do, but he felt evil nearby and growing, like a brooding presence. He felt it to be deep-rooted and of great power, and he was terribly afraid that he was meant to seek it out and protect the children—and perhaps others as well—from its consuming darkness.

And Those Who Trespass Against Us by Helen M MacPherson
Russian Magic Tales from Pushkin to Platonov (Penguin Classics) by Unknown
Death in Salem by Eleanor Kuhns
How to rite Killer Fiction by Carolyn Wheat
Strange Tide by Christopher Fowler
Do Overs by Hebert, Cerian
Sleepaway Girls by Jen Calonita
The Pity Party by William Voegeli
A Cousin's Promise by Wanda E. Brunstetter
Zectas Book II: Heraldic City of Coatl by John Nest