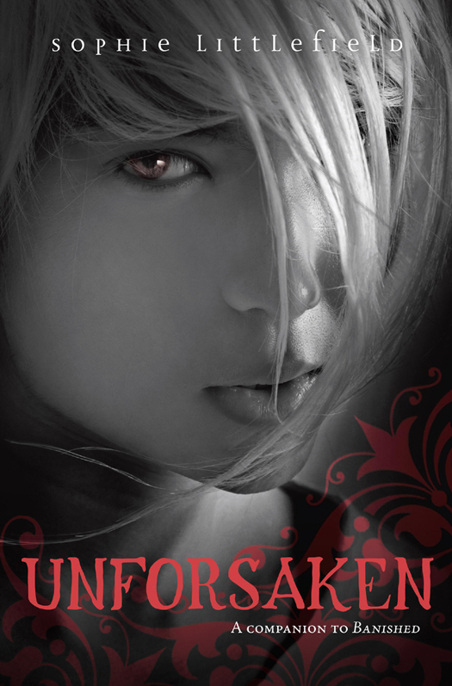 All rights reserved. Published in the United States by Delacorte Press, an imprint of Random House Children’s Books, a division of Random House, Inc., New York.

Delacorte Press is a registered trademark and the colophon is a trademark of Random House, Inc.

Visit us on the Web!
www.randomhouse.com/teens

Educators and librarians, for a variety of teaching tools, visit us at
www.randomhouse.com/teachers

Library of Congress Cataloging-in-Publication Data
Littlefield, Sophie.
Unforsaken / Sophie Littlefield.—1st ed.
p.   cm.
Summary: Having learned that she has powers both to heal people and to create zombies, sixteen-year-old Hailey is trying to lead a fairly normal life with her brother and aunt in Milwaukee, but when she attempts to contact her boyfriend, she brings dangerous villains—both alive and undead—to her doorstep.
eISBN: 978-0-375-89496-1

For Bryan Lamb and Eric Lamb

Some books come easier than others. This one was a joy. Two people made it better than I could have imagined: Barbara Poelle, my agent, who knew exactly what was missing in the first draft—and my editor, Stephanie Elliott, who took time out of a very exciting year to bring the book to life.

“E
LEVEN’S LIKE … THE NEW TEN
,” Jess said, cracking herself up and spitting Coke on Gojo’s coffee table. It had a glass top that showed every mark—fingerprints, smudges of guacamole, and the crumbs from the chips, which were made of blue corn but tasted like every other chip I’d ever had.

Still, it was a first, and out of habit I said the words in my head.
Blue corn chips
. When I got home—which had better be soon—I’d write it in my journal. It would be number 62.

But that was for later. Right now I had to focus.

“That makes no sense,” Charlotte said, licking salt off her fingers. She was sitting on the floor between Gojo’s legs. He leaned back on the couch with a beer dangling loose in one hand, the fingers of the other playing with Charlotte’s wavy red hair.

“No, you know, really,” Jess said, managing to stop giggling only to start up again. I was pretty sure she didn’t usually drink as much as she had tonight. Not like Charlotte, who drank more than Jess and me put together and you couldn’t tell. “Eleven o’clock isn’t as late now that we’re going to be juniors. It’s like the new
ten
o’clock. You know, like … black is the new … no, wait.”

I wasn’t making it up; I really had read it in
Vogue
the day before when Prairie and I went for groceries. We went twice a week, pushing Chub in the shopping cart and buying all kinds of expensive gourmet stuff I’d never seen when I lived in Gypsum, Missouri. Now we lived in downtown Milwaukee, which wasn’t exactly L.A. or New York, but our building had a concierge and our grocery store sold things like squid ink pasta and herbed chèvre and Italian grapefruit soda (numbers 34, 35 and 36).

We always bought a magazine at the store, and then I read the articles to Prairie while she cooked. She said I ought to do the cooking since she worked all day, and she was right, but I saw how much she enjoyed it, making things for the two of us. I tried to do my part by cleaning up, keeping the apartment neat and doing the laundry. And she never complained. None of us did, not even Chub, whose chores consisted mostly of helping set the table and picking up his toys at the end of the day.

We kept things light; we never argued. Two months after we burned the lab down, I think we were still kind of surprised we’d made it out alive—and I was still getting used to living with my aunt. Especially since until a few months ago I hadn’t even known I had any living relatives besides Gram.

If it was weird how Prairie and I came to be in each other’s lives, it was also really easy living together. I was comfortable with her, and I never had to think about what to say around her. Not like I did with Jess and Charlotte. It should have been a natural fit, since the three of us had so much in common: we were all sixteen, all starting our junior year at Grosbeck Academy in the fall, all interested in the same things—clothes, boys, music, makeup.

But I had a secret: they were the first real friends I’d ever had.

That was a secret I meant to keep. Which was why I was sitting here in an apartment across the tennis courts from ours, an apartment that belonged to a twenty-eight-year-old bank branch manager named Gordon Johnson, who drove a red BMW and had told us to call him Gojo and offered us Cokes a week ago Sunday, when Charlotte started talking to him at the pool late in the afternoon.

That day he’d invited us up to his place and given us sodas from the fridge, and we’d played blackjack. Today—another lazy Sunday afternoon that stretched into evening, all three of us calling home to say we were at each other’s places, lies that weren’t questioned by Charlotte’s or Jess’s mom—Gojo
had put frozen pizzas in the oven, scooped guacamole from a jar and poured our Cokes into tall glasses, then topped them off with whiskey.

It wasn’t very good whiskey. In fact, it was dirt cheap. I knew that because my grandmother used to serve it to her customers, and if there was one thing you could say about Gram, it was that she’d been as cheap as they come.

I’d poured my drink out in the sink and filled my glass with straight-up Coke. That was at six o’clock, when we’d first arrived. I’d kept doing it all night, whenever Gojo topped our drinks off. But now it was nearly eleven, half an hour past when I’d said I’d be home, and I had a decision to make.

Should I leave and earn the derision of Jess and Charlotte, the first and only friends I’d ever made?

Or should I stay and give my aunt something to worry herself sick over?

A missed curfew didn’t mean the same thing to me as it did to other kids. If I didn’t come home when I’d said I would, Prairie would immediately think that
they
had found us.

And that we were as good as dead.

“Sorry, guys,” I said, standing up and faking a yawn. “I’d love to stay, but I’ve got a driving lesson first thing tomorrow.”

Jess gave me a forlorn little pout, but Charlotte fixed me with a chilly glare. “So sorry to hear it,” she said coolly as Gojo ignored me and rubbed her neck, his fingers dipping into the back of her tank top. “See you at the pool.”

“See you,” I echoed, and by the time the door closed behind me, I could hear Jess giggling about something else, as though she’d already forgotten I’d been there.

“How’s Charlotte and Jess?” Prairie asked after I’d given her my breathless apology for being late, making up a story about how we’d been watching a movie and lost track of time.

“Fine,” I said, turning away from her and pouring myself a glass of water. I was a terrible liar, and I knew it.

I hadn’t always been. Lying to Gram had been not only easy, but necessary. But with Prairie it was different. After all we’d been through, I felt bad lying to her.

At home, in the apartment where I spent nearly all my time, I let myself forget that she was now Holly Garrett and I was Amber Garrett. Prairie kept telling me that I needed to stop using our old names, that we were never going back. And I kept telling her I needed just a little more time. I knew from the way the line between her eyebrows deepened when I called her Prairie that she thought it was a mistake not to force the issue. But I also knew that Prairie had a hard time saying no to me.

I tried not to take advantage—except when it came to this one thing. I’d give up our old lives, our old names. Soon. Just not quite yet.

“Why don’t you see if Jess and Charlotte want to go to the mall with us Tuesday?” Prairie continued, keeping her voice light. “I can get off a little early, we can try that new sushi place. My treat.”

I tried to ignore the lump in my throat. Prairie was trying so hard—she knew how much it meant to me to fit in here. When we’d first moved to Milwaukee, there had been only a few weeks left in the school year, so she had made arrangements for me to attend a private high school in the fall, and I’d gotten an early start on the summer reading list. Prairie had been on the lookout for friends for me even then; she was so excited when school finally let out and I met Jess and Charlotte at the pool. In a couple of months I would be attending the exclusive Grosbeck Academy with Jess and Charlotte and four hundred girls just like them: pretty, spoiled girls who were used to getting everything they wanted.

Prairie made sure I had everything I needed to fit in. My closet was full of clothes from department stores and expensive boutiques. I had sandals in every color, to show off my pedicure. I had my own bathroom and enough cosmetics and hair products to fill all the cabinets. We had cable and highspeed Internet and great speakers.

No one could tell that three months ago I’d been a freak, an outcast, an orphan in thrift-store rags. A girl nobody wanted, least of all my drug-dealing grandmother, who was now buried in an unmarked grave, courtesy of the citizens of Gypsum.

“So it’s a date, then,” Prairie said, giving me a quick squeeze. She looked so pleased that I didn’t say what I’d been
trying to find words for: that maybe we could make it just the two of us. Just for a little longer.

I wanted
—needed
—to be accepted by Jess and Charlotte. Yet there was a part of me that wasn’t ready. Not by a long shot.

I waited until she got home to tell her. I told myself it was because she never took her phone into the lab where they conducted the experiments—she was part of a team doing some kind of research with high magnetic fields, and they couldn’t take anything electronic into the lab with them—but the truth was that I could have left a message on her work phone, or her cell phone. I knew she checked both the minute she got out of the lab—after she checked the
other
phone, the one hidden in a pocket in the bottom of her purse.

I didn’t call any of those numbers, though. At five, when Prairie came home all excited about our evening out, I was waiting for her, sitting on one of the barstools in the kitchen.