Read Under the Magnolia Online 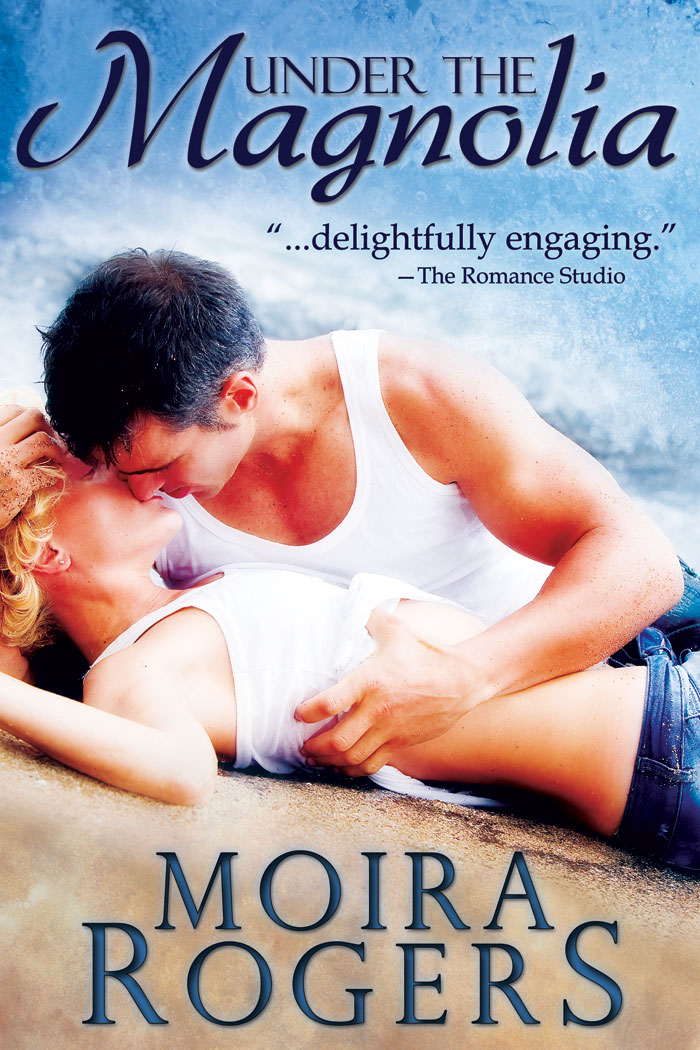 This
is a work of fiction. Names, characters, businesses, places, events
and incidents are either the products of the author’s
imagination or used in a fictitious manner. Any resemblance to actual
persons, living or dead, or actual events is purely coincidental.

All
rights reserved. This book or any portion thereof may not be
reproduced or used in any manner whatsoever without the express
written permission of the publisher except for the use of brief
quotations in a book review.

Wesley Saxon sipped his coffee and
stared out at the darkened August sky. Normally, two o'clock in the
afternoon was bright, sunny, but today was an exception.

Lightning flashed against slate-gray
clouds, and he rubbed his thumb against the side of his mug as he
unconsciously counted off the seconds before he heard the rumble of
thunder. "Storm's moving in fast, Howie. If you want to get in
one last cigarette, you'd better head out before the storm hits."

"Nope. But this one's supposed
to be a doozy."

The sky lightened for a few moments
before rain began to thump against the roof of the police station. In
less than a minute, Wes could barely see out the windows. "Nothing
stronger than a Category Two has hit the Georgia coast head-on in
over a hundred years," he reminded the older man blandly.

Howie just shook his head. "I
don't like it."

As quickly as it had come, the rain
subsided. "It's coming down in fits and starts, that's for
certain." Wes moved back to his desk and checked the phone line
to make sure it was still operable. "At least you didn't have to
handle evacuations. Jack and Chris said some of the vacationers out
on the island didn't want to leave at first."

Howie grimaced and rose, adjusting
his gun belt over his substantial girth. "Dumbasses. That bridge
is built so low that it'll be the first thing that floods out, and
then they'll be stranded, maybe for days."

Wes shook his head. "Nah,
nobody wanted to stay after they heard all the hotels and stores were
closing up. Being stuck out there would be bad enough even if you
weren't
going to be alone. Turns out, nobody wanted to risk it."

"Good." Howie moved to
pour himself a cup of coffee. "You want more, or can I finish
this off and start another pot?"

"Go for it." Wes eyed his
computer screen. "It looks like the—"

Wes' words cut off as the phone
pealed, demanding his attention. He picked up the receiver. "Carter's
Bay Police, Chief Saxon speaking."

"Wesley, we've got a bit of a
situation over here at the shelter." The soft, melodic voice
identified the caller as Howie's wife, Beatrice.

"What's wrong, Bea?" Howie
looked up sharply when he spoke, but Wes shook his head and held up a
hand. "Something bad happen?"

"No, not exactly. We've got two
kids over here who were just out on the island. They say they were
campin' on the beach, missed the first couple of evacuation notices,
then got their car stuck in the mud."

Wes frowned and set down his mug,
already dragging his jacket off the back of his chair. "So how'd
they get to town?"

"Well..." Bea sighed and
lowered her voice to a whisper. "Wesley, they say a woman came
out of nowhere and winched their car free then told them she'd meet
them at the shelter. But they haven't seen hide nor hair of her yet."

Something in her tone of voice gave
him pause. "What are you not telling me, Bea?"

He heard a rustle of activity and a
murmur of voices, and Bea said, almost apologetically, "Honey,
they're describin' her as 'a crazy blonde lady in a ratty old Jeep’."

His heart stuttered painfully.
"Where?"

"Out by the Cove in the park,
they said. Oh, Wes, you'd better hurry."

He bit back a groan as he dropped
the receiver back in its cradle. He should have known who it was the
second Bea mentioned a woman driving straight into the path of a
hurricane to rescue two strangers.

Adelaide Gardner had gotten herself
into a lot of trouble in her day. Her penchant for driving into the
middle of storms and chasing wildly after tornadoes had certainly
made life interesting on more than one occasion; her habit of showing
up in the midst of trouble vexed the law enforcement in her tiny town
to no end. Wherever there was trouble, Addie was there, up to her
knees in it more often than not.

Now was no exception. The hurricane
closing in on the coast was a Category Two at the least. She'd heard
rumors on the radio that the pressure had dropped again at the last
recon flight, with winds now pushing 110 miles per hour. She'd
completed her storm preparations the morning before, and she
should
have been curled up in the basement with her radio and her computer.

Instead, she was wedging rocks and
branches underneath her tires in a frantic attempt to free her Jeep
from the mud.

"So much for precognitive
ability," she muttered angrily as she stomped on the branch she
was holding, breaking it in half. One end went under the left tire,
joining the rocks she'd already shoved there.

Things like this weren't supposed to
happen to psychics. They
especially
weren't supposed to happen to a psychic whose particular gift was
seeing the future. Sure, she was always around when there was
trouble, but she was there to
help
other people, not to put
herself
in need of rescuing.

And yet, here she was, struggling to
free her Jeep from a quagmire in the face of an oncoming hurricane.
Not
in spite
of her gift, but
because
of it. Because she'd woken up in a cold sweat from a nightmare about
two college kids, trapped and terrified as they struggled to keep
from drowning.

Apparently she'd woken up from the
vision before she got to the part where her Jeep got mired in the
mud, leaving her stranded in the middle of the island's rustic state
park, miles from anything approaching a reasonable shelter.

The sky opened up again as she
worked the second branch under her right tire, hopefully giving her
the traction she'd need to drive free. She was drenched to the skin
and shaking from nerves as she climbed back into the Jeep and tried
again.

Harmonia's Kiss by Deborah Cooke
All of the Lights by K. Ryan
A Memory Away by Lewis, Taylor
Dark Promise by Julia Crane, Talia Jager
To Seduce an Angel by Kate Moore
Trials of Artemis by London, Sue
Save Me by Waitrovich, H.M.
From the Editorial Page of the Falchester Weekly Review (A Lady Trent Story) by Marie Brennan
Impávido by Jack Campbell
Delver Magic: Book 05 - Chain of Bargains by Jeff Inlo