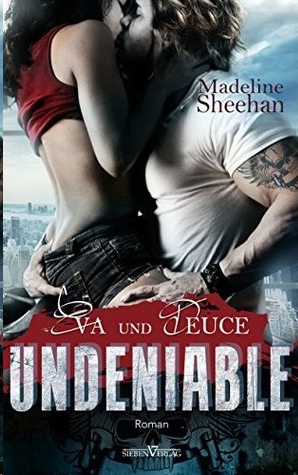 This ebook is licensed for your personal enjoyment only.  This ebook may not be re-sold or given away to other people.  If you would like to share this book with another person, please purchase an additional copy for each reader.  If you're reading this book and did not purchase it, or it was not purchased for your use only, then please return and purchase your own copy.  Thank you for respecting the hard work of this author.

There will always be a reason why you meet people.  Either you need them to change your life or you’re the one that will change theirs.

Mark Twain said, “The two most important days in your life is the day you were born and the day you find ou
t why”

His name was Deuce.

And this is our story.

It is not a pretty one.

Some parts of it are downright ugly.

And because I believe everything happens for a reason, I wouldn’t change a thing.

I was five years old when I met Deuce, he was twenty-three, and it was visiting day at Riker's Island.  My father, Damon Fox or "Preacher", the President of the infamous "Silver Demon's" motorcycle club -mother chapter- in East Village, New York City, was doing a five-year stint for aggravated assault and battery with a deadly weapon.  It was not the first time my father had been in prison and it wouldn't be the last.  The Silver Demon's MC was a notorious group of criminals who lived by the code of the road and gave modern society and all it entailed a great big fuck you.

My father was a powerful and dangerous man who ruled over all Silver Demon's worldwide and was highly respected but mostly feared by other MC's.  He had government connections and ties to the mafias but what made him his most dangerous and most feared was his many connections to average everyday people.  People who didn’t run in his circle, people who were off the grid.  People who c
ould get things done quietly.

His way with words and his killer smile made him friends everywhere he went and considering he'd been riding since he'd still been in my grandmother's womb, when I say everywhere, I mean everywhere.

M
y father's shortcomings, the constant crime and the club lifestyle weren’t strange to me, it was all I knew.

I was holding my Uncle “One eyed” Joe's hand as we walked through Riker's family visiting room.   Since my father was my only parent, my Uncle Joe and Aunt Sylvia had been given temporary custody of me.  My mother, Deborah “Darling” Reynolds, had split a few weeks after I was born.  Many men would have crumbled under the responsibility of a newborn baby, especially a biker, a biker who couldn't handle more than a few weeks
without needing the open road.

Aside from going to prison every once in awhile, my father was a good dad and I’d never wanted for a thing.

Dressed in an orange jumpsuit, his long brown hair pulled back in a ponytail at his nape, Preacher spotted us immediately and jumped up.  He was hindered slightly by the handcuffs around his wrists and ankles, looped together by a chain, and the prison guard standing behind him who shoved him back down.

"Eva," He said softly, smiling down at me as I climbed into an uncomfortable plastic chair.  My sneaker-clad feet didn't reach the floor and my chin barely cleared the table.  Uncle Joe slid into the chair beside me and put his arm around me, pulling my chair close to his.

My father blinked.  Then he blinked again.  I didn't know at the time but my big strong, rough and tough father was trying not to cry.

Excitement battled my tears and won. "I won the spelling bee, daddy!  My teacher, Mrs. Frederick's, she says even through I'm only in kindergarten I can spell as good as a third grader!"

Seeing this grin and not wanting to lose it, I kept going.

"Do you know how old third graders are, daddy?"

"They are eight," I whispered excitedly.  "Or sometimes nine!"

"Proud of you baby girl," My father said, his eyes shining.

I beamed.  When you are young, your parents are your entire world.  My father was my world.  If he was happy, I was happy.

Uncle Joe squeezed my shoulder again.  "Eva honey, why don't you go get somethin' from the snack machines so daddy and I can have a word."

This was typical.  At the club everyone was always "having a word", words I wasn't allowed to hear.  Most times, I didn't really care since all the boys loved me and gave me lots of hugs and let me ride on their shoulders and bought me presents all the time.  To a five-year-old biker brat, an MC full of surrogate big brothers and daddies is the equivalent to a normal child being able to celebrate Christmas every day.

I took my Uncle Joe's money and skipped off to the snack machines.  Two people were in line ahead of me so I did what I always did when I was bored, I started singing.  Unlike most children my age who were listening to New Kids on The Block or Debbie Gibson, I was listening to the music played around the club.  A particular favorite of mine was Summertime by Janis Joplin.  So there I was shaking my butt and singing Summertime way, way out of tune waiting in line for stale potato chips in the Ricker's Island family visiting room when I heard,

I swiveled around and met with a pair of denim-clad legs, the knees worn clean through.  I looked up and my eyes widened in delight.  He was tall and tan, his arms and legs were thickly muscled and his waist was trim.  His forehead was wide, his jaw, strong and square.  His head was shaved, only a fuzz of blonde hair showing and his forearms were heavily tattooed with different depictions of elaborate dragons.
I’d never seen a more beautiful man.
Overall, he looked tai
lor made from The Man Cookbook.

Men like m
y father and my uncles.  Men I
loved with all my heart.

"I like Hendricks's," I said.  "But Janis rules.  I listen to "Rose" almost every single day!"

He grinned down at me and dimples popped out all over the place.

"I like you, kid," He said, still grinning.  "You got good taste in tunes and you've got a pair of chucks on instead of those stupid fuckin' high tops everyone's wearin'."

He liked me.  This was hands down the best day ever.

"I hate high tops," I said, wrinkling up my nose.

I was so throwing out all my high tops when I got home.

When it was my turn in line I stood on my tiptoes and popped change into the machine. I took my time studying the selections, deciding on small bag of salted peanuts.  Moving out of the way, I watched as the man bought two bags of potato chips, three candy bars and a big chocolate chip cookie.

I spared a quick glance at my father and Uncle Joe.  Their heads were bowed over the table still "having a word".

I laughed.  All the men I knew were kinda cranky.

I slipped my hand in his and looked up, ready to go meet his father.  His hand was warm and comfortable like my bed was after I'd slept in it all night.

He stared down at our joined hands, his expression confused.

“Ready,” I told him, tugging on his hand.  Shrugging, he led me to a nearby table where an older man with a long gray beard and a shaved head sat, cuffed the same way my father was.
He
released my hand to take his seat and I climbed into the seat next to him.

"You got somethin
' to tell me?"  The old man asked
his son.

"She likes Janis," He replied.

The old man studied me, "You like Janis, kid?"

I nodded.  "And Steppinwolf and Three Dog Night and the Rolling Stones and Billy Holiday-

I popped some peanuts in my mouth and nodded.  "She rules."

The
old man grinned and his entire face changed.  I knew immediately, a long time ago this cranky old man had been as beautiful as his son.

I poured the rest of my peanuts into his hand and he popped them all into his mouth at the same time.

I jumped at the sound of my Uncle Joe's voice.  He was walking briskly across the room towards me.  Once he reached the table not only did Uncle Joe looked pissed off but so did my two new friends.

"You gotta death wish?" Uncle Joe whispered to the old man.  "Horsemen are in good with the Demon's.  Let's fuckin' keep it that way."

I nodded proudly.  "I am Preacher’s little girl.  And I'm gonna be just like him when I grow up.  I'm gonna have a Fatboy but I want mine to be sparkly and I want a pink helmet with skulls on it.  And instead of being the club President, I’m gonna be the club Queen cuz I'm gonna marry the biggest, scariest biker in the whole world and he's gonna let me do whatever I want because he’s gonna love me like crazy."

My Uncle Joe burst out laughing and the old man shook his head, smiling.
The beautiful man
turned to face me and leaned forward.

"I'm gonna hold you to that," He whispered.

I didn’t respond.  I couldn’t.  I was captivated by the intensity I saw in his bright blue and white flecked eyes.  They reminded me of a frosted over lake.
He
had beautiful icy blue eyes that sucked me in to a warm safe place that I wanted to stay inside of forever.

He stuck out his hand, breaking the spell.  "Name's Deuce sweetheart.  My old man here is Reaper.  It was nice talkin' with ya."

I put my hand in his and his big fingers closed around mine.  "Eva," I whispered.  "That's my name and it was so, so great to meet you too."

He smiled.  And his eyes smiled too.  And I got lost again in his pretty eyes.

Seducing the Demon by Erica Jong
Crucible of Gold by Naomi Novik
Glimmer in the Maelstrom: Shadow Through Time 3 by Louise Cusack
Shadows of the Gods: Crimson Worlds Refugees II by Jay Allan
State of Panic: A Post-Apocalyptic Survival Thriller by Jack Hunt
The Iron King by Julie Kagawa
Trick Me, Treat Me by Leslie Kelly
A Sheetcake Named Desire by Jacklyn Brady
The Time Traveler's Almanac by Jeff Vandermeer
Extreme Medical Services: Medical Care On The Fringes Of Humanity by Jamie Davis