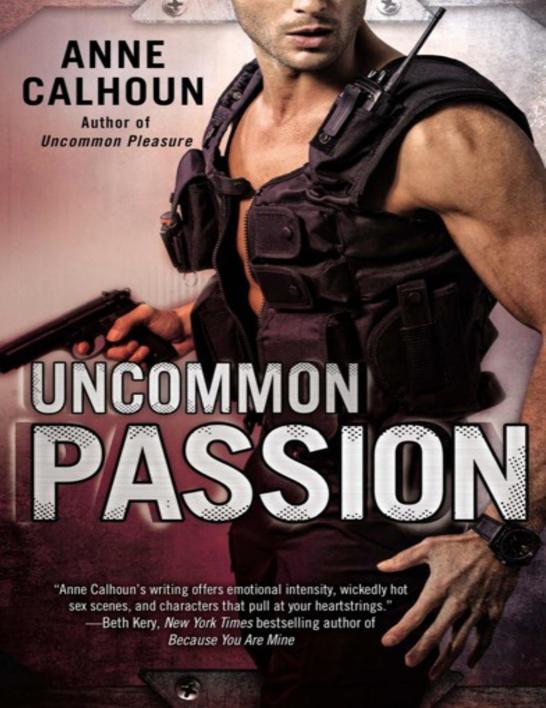 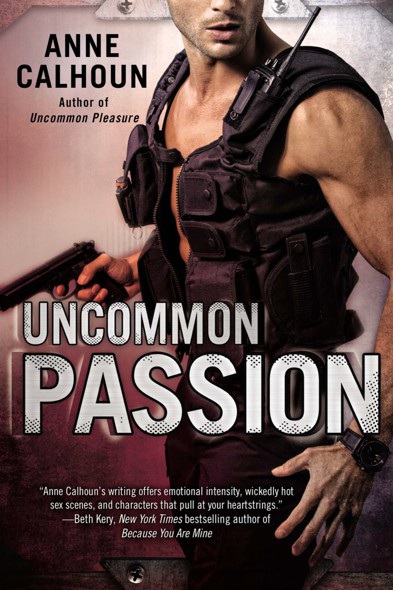 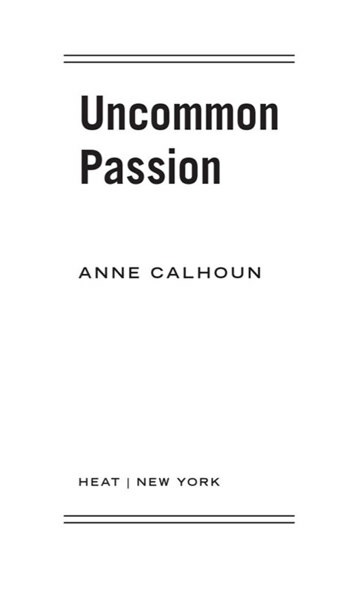 For more information about the Penguin Group, visit penguin.com.

All rights reserved. No part of this book may be reproduced, scanned, or distributed in any printed or

electronic form without permission. Please do not participate in or encourage piracy of copyrighted

materials in violation of the author’s rights. Purchase only authorized editions.

HEAT and the HEAT design are trademarks of Penguin Group (USA).

This is a work of fiction. Names, characters, places, and incidents either are the product of the author’s

imagition or are used fictitiously, and any resemblance to actual persons, living or dead, business

establishments, events, or locales is entirely coincidental.The publisher does not have any control over and

does not assume any responsibility for author or third-party websites or their content.

I probably could write books without Robin Rotham, but I’m so very, very grateful I don’t have to. I

must also thank Jill Shavis, Alison Kent, and Kristin Gabriel (who helped fit the puzzle pieces together after

I almost stood her up at Starbucks). Megan Mulry talked me off ledges and shared a fabulous week in the

West Village when the book was done.

My editor, Leis Pederson, gave me room to roam. My agent, Laura Bradford, guided me from the very

beginning. Thank you both for your continuing support.

This one’s for Robin Rotham.

As always, for Mark.

Farm’s educational center, Rachel Hill got to her feet. Latecomers to the silent auction and boutique who

feared the downpour threatening to break free of the clouds had been parking in the fire zone all evening.

Jess heard her despite the auctioneer’s risqué banter and the audience’s laughter, and nodded. Rachel

swiftly bagged a customer’s purchases—produce, baked goods, four felted pot holders, and a jar of the

farm’s honey—then left Jess alone at the cashier’s table. She ducked under the edge of the tent, heading

“Excuse me,” she called when the driver’s door opened. “You can’t park there.”

A big, booted foot landed on the gravel as if she hadn’t spoken. Thunder rumbled, ominous and slow,

through the cool, dark night. When it faded, she raised her voice, because perhaps he hadn’t heard her.

Without a word the man slid from the driver’s seat and strode toward her. Lightning from the late

spring electrical storm split the sky, sound and fury signifying nothing, as her father used to say. In the

midday bright moment, Rachel took in details as he strode across the parking lot. Broad shoulders and long

arms. White circular embroidery on his left pectoral. Gun on his right hip.

Even to Rachel, who’d had exactly zero encounters with police officers or sheriff’s deputies, the details

White teeth flashed in his tanned face as he tapped a badge on his left hip. “Sure I can,” he said when

the louder clap of thunder died away.

He glanced into the large, brightly lit tent taking up so much of the parking lot, and then back at her. His

gaze skimmed the Silent Circle Farm logo on her shirt.

“You working this party?” he asked.

A large crowd had gathered for the Fleeces, Greens, and Bees Organic Boutique and Bachelor Auction

made with pork from the Tumbled Stones Farm down the road. Tables along the side wall held baskets

brimming with fresh-picked produce. Only the spectacle of the bachelor auction slowed the transfer of

It was a party. Rachel wondered if she’d ever find a place where she didn’t feel totally alone in a crowd

“The auctioneer?” Surprised, Rachel pointed her out, still standing in the spotlight set up to show off the

bachelors. “Is there trouble?”

“Depends on how you define trouble. I’m her next piece of meat,” he said.

Rachel blinked. That glinting, edgy smile flashed on, off, then he set one hand on the gun holstered at

his waist and shouldered into the crowd, the white block letters spelling POLICE clearly visible on the back

of his shirt. Women eddied away from him, like he was the prow of a ship splitting the ocean, then

clustered together to whisper in his wake.

At the sight of him in motion, heat smoldered deep in her belly. Drawn back into the light, she followed

him into the tent and took up her place behind the cashier’s table. Jess, her roommate in the farm’s

bunkhouse, rang up another customer’s purchases and Rachel carefully bagged them, though now her

attention was divided. The police officer spoke to Leanne’s assistant, then joined the line of bachelors. He

“Why would any self-respecting woman buy a date?” Jess said between customers. “That’s the question

Rachel could think of lots of reasons. “Are you going to bid?”

“I might,” Jess replied, her gaze fixed on the line.

The auctioneer swiped at her phone, then looked around the crowded tent. “Next up, folks, we have

Rob Strong, owner of Silent Circle Farm. He provided the location, and the alcohol.”

That got a whoop and a round of applause from the crowd. Rob made his way into the circle of hay

bales marking out the stage. Clean-shaven, with his normally shaggy blond hair somewhat tamed, he wore

slacks and a button-down shirt, his belt and shoes a gleaming shade of walnut. He looked fundamentally

different, something Rachel attributed to the clothes until she realized George the border collie was missing

“He’s been active in organic and community farming for the last ten years, but don’t worry. He’s not

going to put you to work on your date.” The auctioneer paused. “Unless you want him to.”

Another laugh. Jess leaned forward in her seat. Rachel followed her stare and found Rob—who was

watching her, not Jess. He winked. Caught off guard, she blinked and then smiled before he returned his

attention to the auctioneer. Then her gaze landed on the police officer waiting his turn just outside the ring

To find him watching her as well. And unlike the little visual game of tag she, Rob, and Jess had just

played, he didn’t look away when their gazes met. Rachel’s heart thudded hard against her breastbone, and

heat rose in her face. His thick brown hair was closely cropped around his forehead and ears. His eyes,

fringed with dark lashes and glinting a brilliant blue in the tent’s bright lights, held an awareness of her as a

woman that was similar to the way Rob looked at her . . . yet somehow completely different. More

masculine. Rough, with a hint of carelessness in it.

No man had ever looked at her like that, and the intensity of her reaction made her look away first.

When she dared another glance, he’d transferred that searing gaze to the auctioneer, who was in the

process of opening bids on Rob. “Mr. Strong’s offering a night out in Houston that includes dinner and box

seats at an Astros game. Who wants to start the bidding?”

Betrayed: Days of the Rogue by Nicky Charles
Sexual Deception (New Adult Interracial Romance, Bad for You Series Vol #1) by Wright, Kenya
Since You've Been Gone (Welcome to Paradise) by Kennedy, Elle
The Holiday by Kate Perry
Booked for Trouble by Eva Gates
Accidental Cowgirl by McGinnis, Maggie
One Special Christmas & Home for the Holidays by Irene Hannon
Dirty Trick by Christine Bell
Mouthpiece by L. Ron Hubbard
The Undead World (Book 2): The Apocalypse Survivors by Meredith, Peter