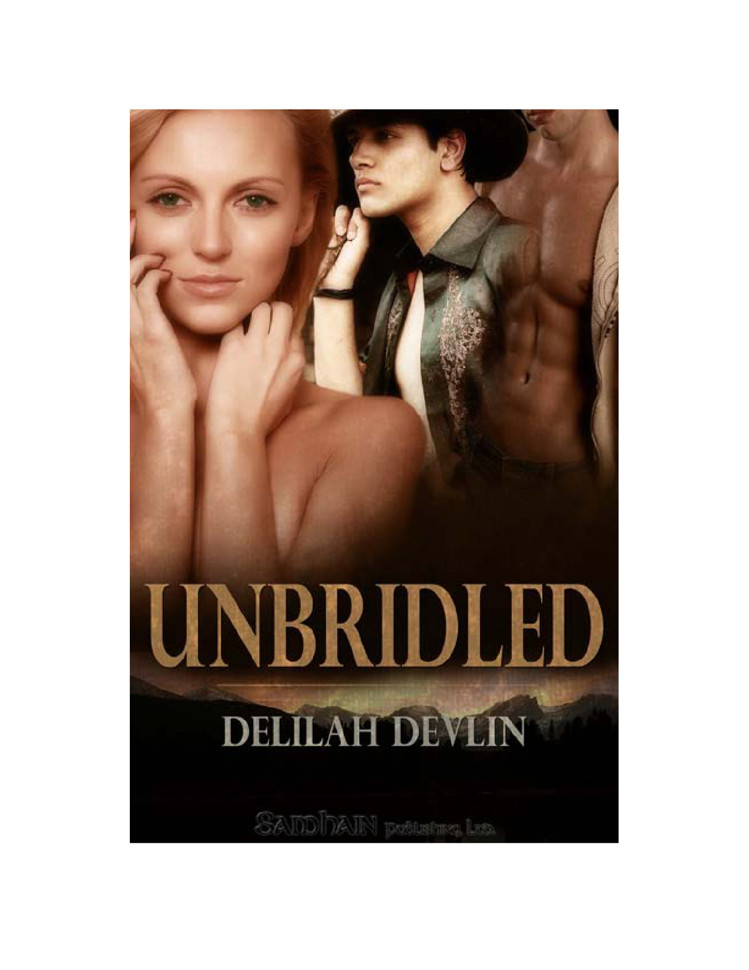 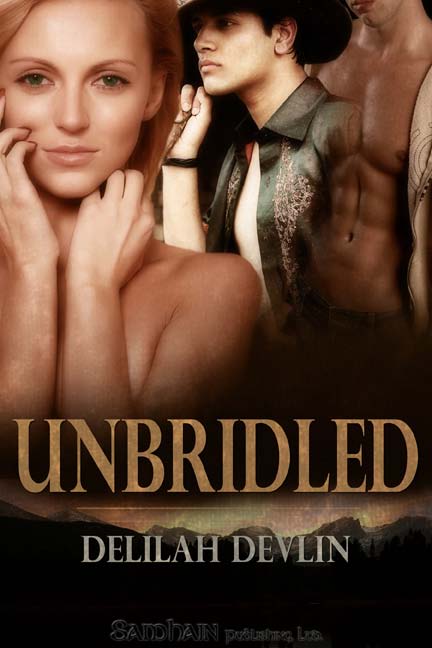 Tough…or tender? If she plays her cards right, she won’t have to choose.

Dani Standifer arrives home at her West Texas family ranch a day early, ready to pick up where she left off with Rowe Ayers, her high school sweetheart. However, when she opens the door to their line-shack trysting place, it’s clear she waited a day too long. Rowe’s with someone else—another man.

And not just any other man—Justin Cruz, the bad boy with whom she shared one wild encounter, years ago.

Justin’s waited a long time for this moment. He knows his reputation, but since he seduced Rowe, he’s been a one-man cowboy—waiting for Dani to return and become the delicious fulfillment of his and Rowe’s needs. If she’s up to the challenge.

To her own surprise, Dani finds she’s more than ready to have both men in her life—as soon as she and Rowe teach Justin a lesson or two about love.

Their small town may not be ready for their kind of relationship. And Dani’s brother Cutter’s mile-deep grudge against Justin throws in a complication that could break the foundation the three of them have built…

Warning: Hold on for the rodeo of your life with rough ridin’ male-on-male action, blazing hot m/m/f scenes, and melt-your-panties lovin’ as each of these sexy cowboys gives it the way they know best to turn their woman inside out.

eBooks are
not
transferable.

Thanks to the ladies of the Diamond State Romance Authors who’ve given me friendship and acceptance despite my many and varied flaws. 

There are moments that can change the course of a woman’s life from one heartbeat to the next. For Dani Standifer, this was that moment.

She’d returned to Two Mule, Texas, a day earlier than she’d planned, intending to surprise her boyfriend. But the surprise was definitely on her. Rowan Ayers’s body, hardening with arousal, demonstrated more poignantly than any “Dear Jane” letter that she’d been gone far too long. He’d moved on.

Everything she’d ever dreamed of for her future evaporated like the sweat glistening on his naked chest.

As well, it hurt that he’d chosen this place to bring another woman. The isolated, ramshackle line shack had been their favorite place, their secret love nest. The cabin sat nestled in a thicket of scrubby cedar, a tall live oak providing the structure shade from the late afternoon sun. The shack was situated inside the Ayers fence line, equidistant from both of their ranch houses. Perfect for the trysts they’d shared throughout high school and during summer breaks from university. Here, they’d explored their young bodies, talked about their dreams for the future…and made plans.

Just moments ago when she saw his horse and realized he was here, emotions had welled up, threatening to overspill—gratitude for his friendship, uncertainty because he’d been so aloof of late, and certainly lust since this place had been their special sanctuary from the world.

She squared her shoulders, preparing to climb up the steps, but then she heard the soft nicker of another horse.

Peering around the corner, she spied a tall, gelded bay, and a leaden weight settled in her middle. But she didn’t want to jump to conclusions. There could be a simpler, more innocent explanation for why two horses were hitched to the rails outside the cabin.

She had to know the truth.

Dani crept silently onto the wooden porch and edged toward the window to take a glimpse inside.

Two cowboy hats lay on the table. The twin mattress from the bed in the corner had been pulled to the center of the floor—just as it always had whenever they’d met for a little afternoon delight.

Rowe stood naked, a hand roaming his taut, flat belly, another gliding up and down his straining cock.

But he was alone.

No fire burned in the hearth, but the cabin had to be hot from the amount of sweat gleaming on his long, lean frame. She stood frozen, noting that his light brown hair was longer than it had been at Christmas, and he hadn’t shaved. A couple days’ worth of bristles dusted his rugged, square jaw. He’d always been scrupulous about his appearance, but she liked the slightly scruffy look and wondered grumpily if his new girlfriend did too.

Which reminded her she needed to get moving or she’d really embarrass herself. And him. Although why she worried about his feelings when he hadn’t had the
cajones
to tell her the truth, she couldn’t say.

With only one room in the cabin, she knew whomever he was meeting had to be outside.

Still, she stayed there for another long moment, staring, lust and anger curling inside her as she watched his ice blue eyes slide shut while he touched himself.

He was readying himself for another lover. Stoking his arousal. Something she’d often watched him do, sometimes sneaking up on him, like now, to spy on him and let her own desire climb. Sometimes, she’d lain on the mattress in front of him, pleasuring herself, both of them staring as their hands and fingers played while their mouths curved into slow, sultry smiles.

Heartsick, she edged backward, trying to decide if she should storm inside to confront him or slink away. One option might leave her feeling foolish; the other would save her a bit of pride while she regrouped her emotions. But did she even have a right to feel hurt? He hadn’t betrayed her. Not really.

She’d been the one reluctant to make any lasting promises, sure she could pick right up where they’d left off when she returned.

Maybe she’d waited too long. The extra year and a half she’d lingered in Austin while she worked on her graduate degree had been something she’d wanted. He hadn’t complained. Not once. The last time they’d been together, he’d still been full of plans for their future. As soon as she said yes, they’d announce their engagement and give her brother the chance to provide the wedding her mother and father would have wanted. They’d do things right.

Suppressing the sob threatening to shudder through her, she backed up another step and came up against something solid.

Strong arms wrapped around her, and she froze. The scent of horse and clean male sweat engulfed her.

Shock rendered her mute and rigid.

“Not what you expected?” he whispered into her ear.

Not what she’d expected? Did Justin Cruz know about Rowan’s new lover? Did he also know that she and Rowan had been seeing each other before she left Two Mule?
Couldn’t be.
She and Rowe had taken a perverse pleasure in keeping everyone guessing for years.

Still, Justin had a bird’s eye view of everything that happened on the Ayers spread since he’d taken over as the ranch’s foreman. Was he here to gloat?

“I don’t know what you’re talking about,” she said tightly. “And you can let me go now.”

“Not a chance. Don’t want you slinking away. Things just got interestin’.”

“How’s that?” she asked breathlessly while squirming inside his tight embrace. “Seems Rowe’s busy.”

Justin’s steamy breath blew against her ear and she remembered the last time he’d been behind her, hot breaths gusting. She closed her eyes and ruthlessly pushed aside the disturbing memories.

“Course not. It’s not anything to me.”

Something wet slid along the edge of her ear. “Did you just lick me?” she said, her voice rising, although she really had to work hard at outrage.

The one time she’d stepped out on Rowe had been with this man—just after she’d graduated from high school, when sex with a grown man seemed like the ultimate rite of passage into adulthood.

Something she’d never admitted to Rowe, but still felt horribly guilty about. The fact Justin had scared her into monogamy with Rowe had made her feel only slightly less like a complete slut.

“And if I did have a little taste, what are you gonna do about it, Dani-girl? Gonna scream the place down and let Rowe know you’ve been spyin’ on him?”

“But you didn’t exactly back up the second you realized he was expectin’ company, did you?”

“I shouldn’t have lingered. But I was…surprised.” An extreme understatement of how she really felt.

“No, you shouldn’t have stayed. Why are you here, sweetheart?”

“Nothin’ stoppin’ you now,” he said, pushing her toward the door.

“Stop it, Justin,” she whispered harshly, dragging her feet. “Quit playing around—”

He reached around her and pushed open the door.

“I started without you,” Rowe said, without turning around.

“Did I tell you that you could?” Justin said coldly.

Dani blinked, then drew in a deep, sharp breath. “You were expecting
him
?” She shrugged out of Justin’s embrace and stared from one man to the other.

Rowe’s head swiveled toward her. “
Jesus
, Dani, what are you doing here?” he said, color flooding his cheeks. His gaze went guiltily from her to Justin.

“I’m back early,” she said, her voice thickening. “I thought…when I saw your horse…”
What the
fuck? Rowe and Justin!
She couldn’t get her head around it. Well, at least not around the fact Rowe was involved with Justin. Justin was another matter altogether. She wouldn’t put any form of perversity past him with his reputation.

“You didn’t think it odd there were two horses here?” Justin casually leaned a shoulder against the doorframe. One dark brow arched in a wicked challenge.

Dani stiffened. “I thought he might have another girl. I wondered who she was.”

“Jesus Christ.” Rowe bent to grab his blue jeans from the floor, then held them in front of his gleaming cock.

Rowe’s fist clenched around his jeans, then he dropped them to the floor and straightened his shoulders. A look of resignation entered his face; a silent plea for understanding glittered in his pale eyes as he returned her stare.

“I didn’t know you were gay,” Dani blurted out, ignoring Justin’s smirk.

“You’re naked, obviously aroused. What could be more simple?” she asked, trying to gather anger around her, but mostly feeling confused. How could she not have known?

“Yeah, what’d I miss?” Dani snarled at Justin, hating him at this moment for rubbing her nose in her own naiveté.

Recipe for Magic by Agatha Bird
Barracoon by Zora Neale Hurston
The Courts of Love: The Story of Eleanor of Aquitaine by Jean Plaidy
Against the Odds: A Love Story by Adams, J.
Remembering You by Tricia Goyer
Flying Free by Nigel Farage
The Painter: A Novel by Peter Heller
Vampire Crush by A. M. Robinson
Only By Your Touch by Catherine Anderson
CHOCOLATE, TEA AND THE DUCHESS by ADDAMS, BRITA