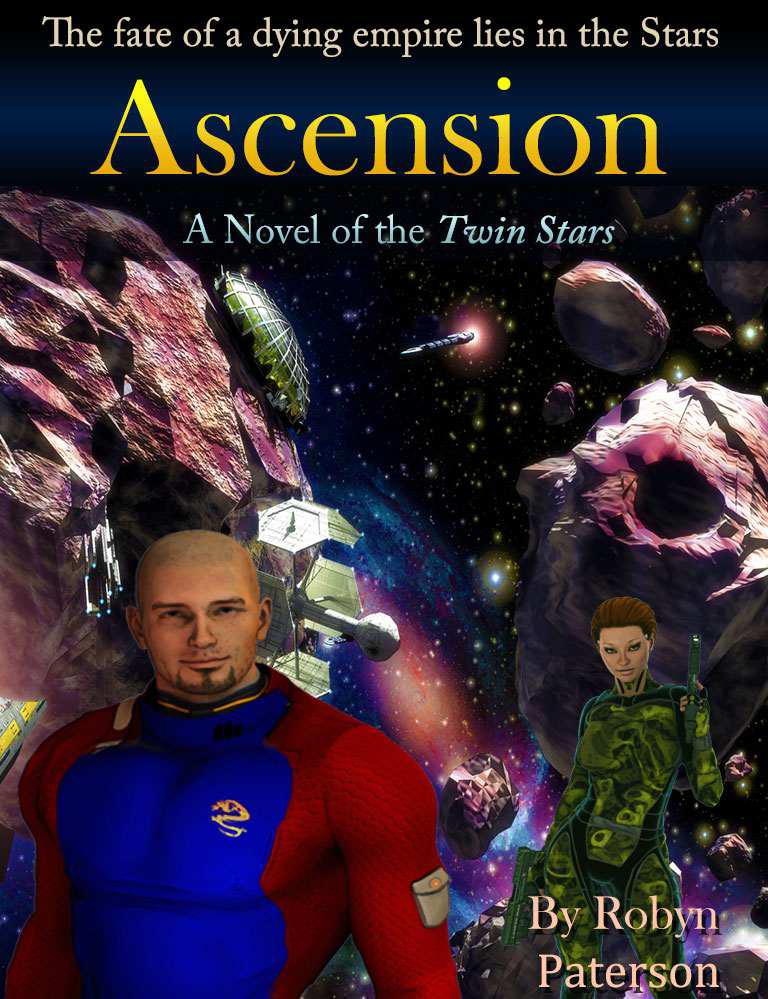 Ascension- A Novel of the Twin Stars

For Those Who Have Listened to the Audio Drama

For Those Who Haven’t Listened to the Audio Drama

If you Enjoyed This Book

This book is dedicated to Greg “Tysen” Nugent and Melissa “Ping An” Sternenberg, for bringing the characters to life.

And with special thanks to:

The best crew anyone could to go into space with!

And of course, my wife- Connie. The star who guides my travels through life.

For Those Who Have Listened to the Audio Drama

This book follows the first season of the Twin Stars audio drama, and expands on the story and situations you are already familiar with. The book and the audio drama run about 90% parallel to each other, but there were things I felt needed to be changed both to fit the new medium of text and because I wanted to improve upon the story. As such, you should consider this book an alternate retelling of the story rather than a strict adaptation, and let each be their own tale.

For Those Who Haven’t Listened to the Audio Drama

Ascension started life as a full cast audio drama called Twin Stars in 2007 for the Kung Fu Action Theatre podcast. What you have here is a retelling of the first season of that show, which has gone on to have over a quarter of a million listeners since its debut.

To answer the obvious question- no, you don’t need to have listened to the Audio Drama or even have heard of the show to enjoy this book. It’s one-hundred percent its own thing, and can (and should) be enjoyed or disliked for what it is. In fact, I am treating this book (and any that come after) as a reboot, rather than an adaptation, so it will have its own continuity separate from the original dramas. They were my rough draft, hastily assembled and produced on a tight schedule, and this is my finished production, written with thought and consideration.

At the time I wrote Twin Stars, the audio drama world was filled with fanworks, but had precious little in the way of original productions, especially in the area of Space Opera. If you wanted to hear a rip-roaring space adventure your options were Old-Time Radio from the 30s or a handful of Star Trek and Star Wars fan productions, and that was pretty much it. So, I did what I usually do when I can’t find something that I want, I made it myself.

If you want the full story of how Twin Stars came about, find the Kung Fu Action Theatre podcast and look up the Audio Drama Dojo episode about Twin Stars. I go fully into where it came from there, but suffice it to say this is my own take on what a swashbuckling Space Opera series is like.

Feeling a shudder run through the length of the ship, Lieutenant Albert Tysen knew that it was not going to be a good day.

Tysen sent a command to dismiss the swarm of Augmented Reality windows that floated around him in his quarters, causing the little semi-transparent boxes and circles of light floating around him to snap shut, then stood up, stretching. The journey in-system to Miraposa III from the Jump Point had taken his ship, the Star Guard Cutter
Crystal Leaf
, almost two standard days, and while most aboard dreaded the tedious journey, he had relished it for the chance to live and work in the peace of an orderly ship.

Now that peace had ended.

Tysen looked up to his left and the wall of his cabin became transparent to him as the ship’s AR system overlaid a view from the ship’s exterior on top of the wall. The orbital transfer station that circled Miraposa III filled his vision- a slender central pillar surrounded by layers of habitat rings. The station itself was huge, a port city in space to greet all travelers to the frontier planet below.

The shudder Tysen felt came from docking with the station, with the
Crystal Leaf
now attached to the pillar by a docking tendril just above the main habitat ring. Tysen focused on the docking tendril, and accordingly the AR window enhanced the place he was interested in, zooming in on a transparent portion of the tube where he could see two of the ship’s techs laughing with some of the station’s dock workers.

It wasn’t that this particular behavior was a problem, as despite his adherence to “the way things should be done” there was no rule against what he saw, but it was just that this exchange enhanced the anxiety he was already feeling. Thanks to the ongoing Budget Crisis, the personnel aboard the
Leaf
hadn’t been paid in several months, and each stop they made increased the chance of deserters fleeing the ship. A ship that was already becoming difficult to manage with the few crew members they had.

Things had reached the point where Tysen had requested to Captain Dorrick that all leave be canceled at this port of call, but the Captain had refused him. Unlike Tysen, the Captain felt that a shore leave during the colony’s Settlement Day Festival period would relieve stress, and in fact had ordered that only a skeleton crew remain on board the ship. This meant that only a handful of the ship’s 25 crewmembers would be left aboard, along with the various bots and automata that helped maintain things. The rest would enjoy an extended vacation while the ship made its port of call here to remind the locals that the Empire still existed- even if they were only being visited by one of its smallest vessels.

The door to Tysen’s cabin chirped, and Tysen used his implanted neutral link to open it with a thought- admitting a uniformed man with a Cheshire grin and a mop of red hair.

“Hey buddy!” He announced as he wandered into Tysen’s small cabin, “You want the monkey mask or the weird harlequin mask?”

Tysen turned to look down at both the hard plastic masks offered by his friend, wrinkling his nose at the sight of them. Captain Dorrick had also ordered him, as the ship’s third-in-command, to accompany the crew onto the station and join the festivities. A prospect he did not like.

“Kip, where did you find these?”

His friend shrugged. “Easy. I whipped ‘em up. Had a few stored patterns from previous festivals I’ve been to.” He held up the mask of the frowning-faced monkey to his own- “How about you take the Harlequin mask? I wanna look wild and strange- it really drives the ladies crazy!”

Tysen rolled his eyes as he walked to his closet, the door opening on his approach. “Better you than me.” Then, as he started to pull out some civilian clothes, he added- “Although, I can’t imagine why any woman would want to give her time to a drunken monkey in a fleet uniform.”

When Second Lieutenant James Kipps lowered the mask, his expression was almost the same sour one it had. “Al, Al! You’re missing the big picture here, buddy. This is Settlement Day! A giant street festival! Those ladies are out looking for adventure and excitement! They’re here to forget their boring lives and live a little- the wilder the better! It’s our job...no...our DUTY as members of the Imperial Star Guard to show them a good time! Now, c’mon! Hurry and get dressed, the others can’t wait to get going.”

“Okay. Fine. Just allow me a moment.” Tysen told his duty smartsuit to change, which the skin-tight red and blue bodysuit did, sliding like water along Tysen’s tall, muscled form and withdrawing to form a pair of briefs around his waist. Then he began pulling on the civilian pants. “Did you send someone to get rid of those missionaries?”

For some time now, it had been the policy of the fleet to take on civilian passengers when on patrol in peaceful areas, primarily as a means of generating some extra income. Tysen was against the practice, and considered it a security risk, but central command had ordered it and Captain Dorrick had been all too happy to comply, as his ship had a number of empty births. As the
Crystal Leaf
was on a routine patrol going from system to system, Dorrick had taken aboard a few students, a young couple, and a group of missionaries bound for Miraposa III at the last port of call.

Tysen had no issues with the students or the couple, they were quiet and kept out of the way, but the missionaries all seemed determined to involve themselves with the crew as much as possible. It was their religion, and Tysen, who was not a religious person of any sort, gave it tolerance, but only so far as it didn’t interfere with ship operations. In the end, he’d been forced to confine them to quarters for the last three days of the journey for the safety of all involved.

Kip nodded. “Yeah, Cholkowski went to get them. Thank the lords they’re gone; they were really starting to give me the creeps. Always staring at each other like that- communicating over their personal area networks and leaving the rest of us out of it.” He shivered. “Just too weird.”

Almost finished, Tysen glanced down at his footwear, considering whether to change them or not, but decided to leave them as they were- he wanted to wear something that reminded him and others of who he really was. “Well, they’re not our problem anymore- that’s the important thing.”

“You said it, man, you said it.” Kip put his mask on, sealing it to his face, and offered Tysen his. “Now, let’s get out there and find us some fun!”

Tysen looked at the mask like he was being offered a dead animal, the reached out and took it.

“I can hardly wait.”

Inside the station’s docking ring, a gaunt young man with a beatific smile walked alone along the broad main concourse, greeting people as he passed among them. He was one of twenty young people clad in simple grey robes who had just passed through a security check after leaving the warship that had brought them here.

Turning a corner, Brother Io moved among the travelers in the largest and most crowded of the open areas, pausing only to let gaily colored children in costumes run past as he marveled at the vivaciousness of life here in this artificial world.

Their deaths would be glorious.

Nodding to himself, Brother Io opened his mind to the virtual world of Linkspace.

“Brother Ganymede, are we prepared?”

It was a shallow connection, so the mental voices only echoed between himself and one other.

“Yes, Brother Io,” came the ghostly reply. “The brethren are moving to take their positions throughout the transfer station and as we speak our weapons are being assembled by the nano-artificers that had been prepared.”

Io paused to let a young couple join the line for the lift ahead of him, then nodded to himself. “Excellent. Soon this place will be returned to the solar winds from whence it came.”

“As you say, brother.” Ganymede agreed. “I also took care of that extra matter you requested.”

“The items left aboard the Imperial Cutter?”

“Yes. It will prevent them from interfering in our works.”

Io frowned. “A pity, really. I believe several of them were willing to join us after listening to our message.”