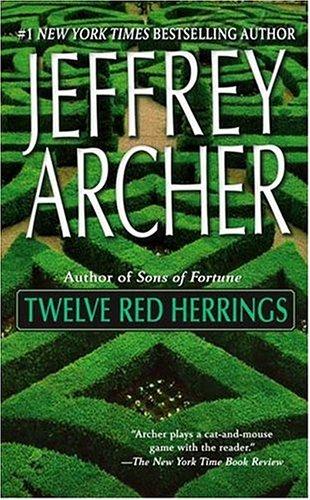 how
do they react
when there is an opportunity to seize,

a
crucial problem
to solve, a danger to avoid? Each tale

uncover
, while the last
one provides a choice of endings.

Also by the same author:

SHALL WE TELL
THE PRESIDENT?

A MATTER OF
HONOUR

AS THE CROW
FLIES

A QUIVER FULL OF
ARROWS

A TWIST IN THE
TALE

by
BCA by
arrangement with Harpercollins publishers All rights

reserved
. No part of
this publication may be reproduced, stored in a

retrieval
system, or
transmitted, in any form, or by any means,

the
prior
permission of the publishers.

To
Chris, Carol and Alyson.

IT’S
HARD TO KNOW EXACTLY WHERE TO BEGIN.

But first, let me explain why I’m in
jail.

The trial had lasted
for eighteen days, and from the moment the judge had entered the courtroom the
public benches had been filled to overflowing. The jury at Leeds Crown Court
had been out for almost two days, and rumour had it that they were hopelessly
divided. On the barristers’ bench there was talk of hung juries and retrials,
as it had been more than eight hours since Mr. Justice Cartwright had told the
foreman of the jury that their verdict need no longer be unanimous: a majority
of ten to two would be acceptable.

Suddenly there
was a buzz in the corridors, and the members of the jury filed quietly into
their places. Press and public alike began to stampede back into court. All
eyes were on the foreman of the jury, a fat, jolly-looking little man dressed
in a doublebreasted suit, striped shirt and a colourful bow tie, striving to
appear solemn. He seemed the sort of fellow with whom, in normal circumstances,
I would have enjoyed a pint at the local.

But these were
not normal circumstances.

As I climbed
back up the steps into the dock, my eyes settled on a pretty blonde who had
been seated in the gallery every day of the trial. I wondered if she attended
all the sensational murder trials, or if she was just fascinated by this one.
She showed absolutely no interest in me, and like everyone else was
concentrating her full attention on the foreman of the jury.

The clerk of the
court, dressed in a wig and a long black gown, rose and read out from a card
the words I suspect he knew by heart.

“Will the
foreman of the jury please stand.” The jolly little fat man rose slowly from
his place.

“Please answer
my next question yes or no. Members of the jury, have you reached a verdict on
which at least ten of you are agreed?’

“Members of the
jury, do you find the prisoner at the bar guilty or not guilty as charged?”
There was total silence in the courtroom.

My eyes were
fixed on the foreman with the colourful bow tie. He cleared his throat and
said, ‘...

I first met
Jeremy Alexander in 978, at a CBI training seminar in Bristol. Fifty-six
British companies who were looking for ways to expand into Europe had come
together for a briefing on Community Law.

At the time that
I signed up for the seminar Cooper’s, the company of which I was chairman, ran
27 vehicles of varying weights and sizes, and was fast becoming one of the
largest private road haulage companies in Britain.

My father had
founded the firm in ‘93, starting out with three vehicles – two of them pulled
by horses – and an overdraft limit of ten pounds at his local Martins bank. By
the time we became “Cooper & Son’ in ‘967 the company had seventeen
vehicles with four wheels or more, and delivered goods all over the north of
England. But the old man still resolutely refused to exceed his ten-pound
overdraft limit.

I once expressed
the view, during a downturn in the market, that we should be looking further
afield in search of new business – perhaps even as far as the Continent. But my
father wouldn’t hear of it. “Not a risk worth taking,” he declared. He
distrusted anyone born south of the Humber, let alone those who lived on the
other side of the Channel. “If God put a strip of water between us, he must
have had good reasons for doing so,” were his final words on the subject. I
would have laughed, if I hadn’t realised he meant it.

When he retired
in 977 – reluctantly, at the age of seventy – I took over as chairman, and
began to set in motion some ideas I’d been working on for the past decade,
though I knew my father didn’t approve of them. Europe was only the beginning
of my plans for the company’s expansion: within five years I wanted to go
public. By then, I realised, we would require an overdraft facility of at least
a million pounds, and would therefore have to move our account to a bank which
recognised that the world stretched beyond the county boundaries of Yorkshire.

It was around
this time that I heard about the CBI seminar at Bristol, and applied for a
place.

The seminar
began on the Friday, with an opening address from the Head of the European
Directorate of the CBI. After that the delegates split into eight small working
groups, each chaired by an expert on Community Law. My group was headed by
Jeremy Alexander. I admired him from the moment he started speaking – in fact,
it wouldn’t be an exaggeration to say that I was overawed. He was totally
self-assured, and as I was to learn, he could effortlessly present a convincing
argument on any subject, from the superiority of the Code
Napol(
on
to the inferiority of the English middle-order batting.

He lectured us for
an hour on the fundamental differences in practice and procedure between the
member states of the Community,
then
answered all our
questions on Commercial and Company Law, even finding time to explain the
significance of the Uruguay Round. Like me, the other members of our group
never stopped taking notes.

We broke up for
lunch a few minutes before one, and I managed to grab a place next to Jeremy. I
was already beginning to think that he might be the ideal person to advise me
on how to go about achieving my European ambitions.

Listening to him
talk about his career over a meal of stargazy pie with red peppers, I kept
thinking that, although we were about the same age, we couldn’t have come from
more different backgrounds. Jeremy’s father, a banker by profession, had
escaped from Eastern Europe only days before the outbreak of the Second World
War. He had settled in England, anglicised his name, and sent his son to
Westminster. From there Jeremy had gone on to King’s College, London, where he
read Law, graduating with first-class honours.

My own father
was a self-made man from the Yorkshire Dales who had insisted I leave school
the moment I passed my O levels.

Tll teach you
more about the real world in a month than you’d learn from any of those
university types in a lifetime,” he used to say. I accepted this philosophy
without question, and left school a few weeks after my sixteenth birthday. The
next morning I joined Cooper’s as an apprentice, and spent my first three years
at the depot under the watchful eye of Buster Jackson, the works manager, who
taught me how to take the company’s vehicles apart and, more importantly, how
to put them back together again.

After graduating
from the workshop, I spent two years in the invoicing department, learning how
to calculate charges and collect bad debts.
A few weeks after
my twenty-first birthday I passed the test for my heavy goods vehicles licence,
and for the next three years I zig-zagged across the north of England,
delivering everything from poultry to pineapples to our far-flung customers.
Jeremy spent the same period reading for a master’s degree in Napoleonic Law at
the Sorbonne.

When Buster
Jackson retired I was moved back to the depot in Leeds to take over as works
manager. Jeremy was in Hamburg, writing a doctoral thesis on international
trade barriers. By the time he had finally left the world of academia and taken
up his first real job, as a partner with a large firm of commercial solicitors
in the City, I had been earning a working wage for eight years.

Although I was
impressed by Jeremy at the seminar, I sensed, behind that surface affability, a
powerful combination of ambition and intellectual snobbery that my father would
have mistrusted.

I felt he’d only
agreed to give the lecture on the off-chance that, at some time in the future,
we might be responsible for spreading some butter on his bread. I now realise
that, even at our first meeting, he suspected that in my case it might be
honey.

It didn’t help
my opinion of the man that he had a couple of inches on me in height, and a
couple less around the waist. Not to mention the fact that the most attractive
woman on the course that weekend ended up in his bed on the Saturday night.

We met up on the
Sunday morning to play squash, when he ran me ragged, without even appearing to
raise a sweat. “We must get together again,” he said as we walked to the
showers.

“If you’re
really thinking of expanding into Europe, you might find I’m able to help.” My
father had taught me never to make the mistake of imagining that your friends
and your colleagues were necessarily the same animals (he often cited the
Cabinet as an example). So, although I didn’t like him, I made sure that when I
left Bristol at the end of the conference I was in possession of Jeremy’s
numerous telephone and fax numbers.

I drove back to
Leeds on the Sunday evening, and when I reached home I ran upstairs and sat on
the end of the bed regaling my sleepy wife with an account of why it had turned
out to be such a worthwhile weekend.

Rosemary was my
second wife. My first, Helen, had been at Leeds High School for Girls at the
same time that I had attended the nearby grammar school. The two schools shared
a gymnasium, and I fell in love with her at the age of thirteen, while watching
her play netball.

After that I
would find any excuse to hang around the gym, hoping to catch a glimpse of her
blue knickers as she leapt to send the ball unerringly into the net. As the
schools took part in various joint activities, I began to take an active
interest in theatrical productions, even though I couldn’t act. I attended
joint debates, and never opened my mouth. I enlisted in the combined schools
orchestra and ended up playing the triangle. After I had left school and gone
to work at the depot, I continued to see Helen, who was studying for her
A
levels.

Still Life with Elephant by Judy Reene Singer
Minus Me by Ingelin Rossland
Slither by Lee, Edward
A. Gardner - Poppy Peters 01 - Southern Peach Pie and A Dead Guy by A. Gardner
At All Costs by John Gilstrap
The Half Dwarf Prince by J. M. Fosberg
For a Few Demons More by Kim Harrison
Dark Justice by Brandilyn Collins
A Free Man of Color by John Guare
Dead Europe by Christos Tsiolkas