Read Trouble When You Walked In (Contemporary Romance) Online

Trouble When You Walked In (Contemporary Romance) 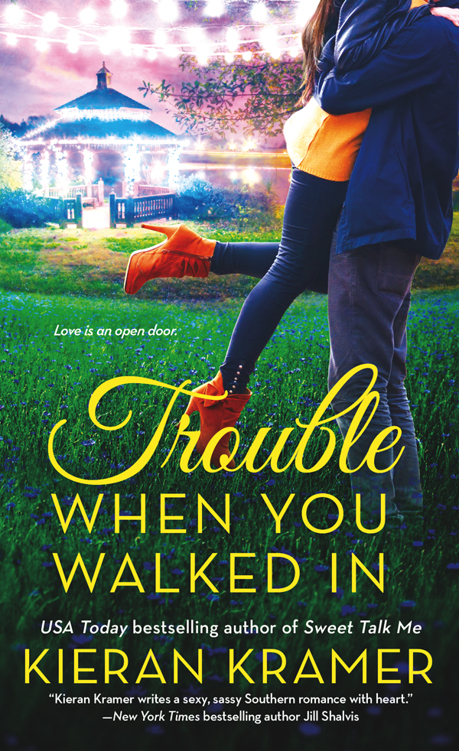 To my North Carolina family … you’ve enriched my life so much, and I love you all!

I’m proud to call myself an honorary Tar Heel.

“Come up into the hills, O my young love. Return!”

As always, I can’t say enough good things about Jennifer Enderlin and the extended family that is St. Martin’s Press. You’ve been so good to me—all of you—and I’ll always be grateful for your support, your good humor, your patience, and your friendship.

I must also give a huge shout-out to my readers, both old and new. My books aren’t complete until they get into your hands and you work your own sort of magic on them. You bring good will, vivid imaginations, and your hearts to the pages of my stories. You make them so much more than what they were when they existed as mere words on my laptop. Thank you for your kindness and generosity—you give me so much more than I can possibly give you.

I’d also like to thank my family and friends, who’ve stuck with me through ten novels! I should have bought stock in DiGiorno pizza back in 2010, when I started this incredible journey. You’ve all been wonderful, loving, my biggest cheerleaders, especially Chuck, Steven, Margaret, and Jack.

Here’s to the next ten novels, and here’s to you—every single person who’s ever wished this author well.

If a ridiculously handsome man talks too loudly in a library and no one’s there to hear but a repressed librarian, an old lady with a hearing aid, and a plastic pageant queen, does he still make a sound?

Cissie Rogers—who bristled at all stereotypes, even if they might ring true—decided then and there that a librarian doesn’t entertain such questions. A librarian shushes people, no matter how hot they are. It’s her job, even if the man is Boone Braddock, local mayor, football coach, and town stud.

She was back in large-print fiction with Mrs. Hattlebury when the front door of the Kettle Knob library opened and a woman’s laughter filled the air—a woman’s
fake
laughter, which trailed off with an artificial sigh.

Cissie’s skin prickled. There was only one person in western North Carolina who laughed like that: Janelle Montgomery.

What did Janelle want Boone to stop? Kissing her? Being too sexy for his own good?

“Where’s the librarian?” he asked in his whiskey-and-gravel voice.

Boone Braddock had never been in the library. Ever. And he was looking for Cissie.

She stopped breathing. Her palms instantly dampened. And her lower belly—contrary to her wishes—began a slow tingling burn of awareness.

She prepared to round the corner with her finger to her lips, but Mrs. Hattlebury grabbed her arm. “Rumor has it those two were caught doing it like rabbits up near Frazier Lake in broad daylight last week,” the old woman whispered loudly in Cissie’s ear. “But Chief Scotty let ’em off the hook. He has to, don’t you know.”

“I hate mayors,” Cissie whispered back. Sexual frustration made her ornery. “They think the rules don’t apply to them.”

She wished
she
could have sex by Frazier Lake—but not with Boone, not if he couldn’t even remember her name. With Mr. Darcy. Too bad he wasn’t real. Maybe if she dressed up Boone like Darcy—

No. They were nothing alike.

“All politicians are that way,” Mrs. Hattlebury reminded her in her strong Smoky Mountains drawl.

“Especially mayors.” Cissie’s words were soaked in Southern inflections, too, like warm bourbon cake. But Mother was from Vermont, so Cissie sounded a little less local than her Kettle Knob neighbors.

As for her declaration, she knew she was making no sense, but she didn’t care. When it came to Boone and Janelle, she was a mass of petty insecurities, and she indulged them freely, the way she couldn’t stop herself from eating freshly popped popcorn, no matter how full she was.

“You don’t really hate all mayors, do you, dear?” Mrs. Hattlebury asked too politely, which meant she thought Cissie might be a tad touched, as they said around here—like Cissie’s grandmother Nana Rogers, who actually wasn’t touched at all. She managed the local community theater, but you know theater people … they’re crazy, in the best way.

“No.” Cissie made a comic face and tried to chuckle. “Of course not. I didn’t hate his grandfather. He threw good candy at the Christmas parade. No wonder we elected Boone. He brought the tradition back.”

“Yes, the Christmas-candy angle,” Mrs. Hattlebury said faintly. “That must be the reason a Braddock has been mayor of Kettle Knob for almost sixty years—except for that brief era we had a no-name mayor who threw stale, cracked peppermints at the holiday parade.” She paused. “Are you sure you’re okay, dear?”

She needed a man, too, but surely her bitterness was all about temporary chemical withdrawal.

“Maybe it’s just Janelle who gets on your nerves,” Mrs. Hattlebury said thoughtfully. “She’s a bit full of herself these days. But not Boone. We’re glad he’s mayor, aren’t we?”

Cissie turned red. “He’s an, um, adequate public servant.” But she was thinking of him in those jeans of his and that indescribable place where his faded zipper flap rode like a rollercoaster over some pretty impressive terrain. He was more than adequate in that department. She was evil for having noticed, but she’d had sunglasses on at the time, so it was okay.

“I
know
,” Cissie interrupted rudely, but how many times in her lifetime was she going to hear about Silas Braddock leading a ragtag unit from Kettle Knob down to King’s Mountain during the Revolutionary War and springing a surprise attack on an isolated British outpost and soundly defeating them?

The Revolutionary War–era Rogers clan had been reading books, writing letters, and analyzing poetry at the time of the raid in the privacy of their home in Kettle Knob. No one had knocked on
their
door to ask for help at King’s Mountain. But avid scholars that they were, they made sure to record the event after interviewing every man who’d gone. And they’d dutifully archived the account, which was given by future Rogerses to the library for safekeeping.

Boone’s father, Frank, and his mother, Becky Lee, were the Tasmanian devils of western North Carolina. Wherever they spun their influence, dirt clods went flying—usually at the groundbreaking of one of their mountain golf resorts—and they made lots of money.

“They’ve never contributed a dime to the Friends of the Library fund.” Cissie couldn’t believe she’d said that out loud. You weren’t supposed to talk bad about that family.

“But honey.” Mrs. Hattlebury eyes softened in pity. “They’re Braddocks. You’re a Rogers. And ne’er the twain shall meet. Surely, you understand. We’ve all learned to appreciate the distinction. You each bring your own special gifts to Kettle Knob and live in harmony.” She paused. “Don’t you?”

If totally ignoring each other was harmony, then yes.

Mrs. Hattlebury kissed her good-bye, and Cissie sighed. She was tired all of a sudden—tired from staying up late with Nana last night stapling show pamphlets and tired of the way everyone in this town was slapped with a label from the time they left the womb like a bunch of canning jars lined up on a shelf. She didn’t know why she’d ever come back—except of course she knew why.

She loved the smell of pinesap in the morning. The call of a mama bear to its cubs from far off. The way the mountains rolled like giant waves toward the Rogers home, humble as it was. And she loved the people here. There were only a few phonies. They looked out for one another, yet they were also fiercely independent.

Nowadays, Cissie was great with comeback lines—but mainly with older people. She still felt like a dork around cute single guys and some women her age, the rare few who hadn’t lost their youthful mean-girl competitiveness.

Janelle was one who maybe hadn’t. Cissie wasn’t sure. As a kid, Janelle had been just as smart as she was pretty, but starting in sixth grade, she’d given up trying to win the spelling bee and the science fair. Pageants became her thing, that and wrapping boys around her little finger. Now, as the mayor of Campbell, she had that whole town enthralled.

And then there was Boone in those inappropriate jeans of his and brown boots. A serious mayor didn’t wear Levi’s and Carhartts—and then have the temerity to look like an Abercrombie & Fitch model! Nor did he have dimples when he grinned. And he most certainly didn’t spend half his time on a football field exhorting boys with perfectly good brains to smash into one another and risk getting concussions.

Inside, Cissie’s heart thumped madly. Unlike Janelle, she wasn’t much into beauty tricks. Or fashion. But she
was
into books. She could go on
Jeopardy!
and win the Daily Double if it was about books. She could beat anyone in a book takedown. She didn’t know what that was—yet—but it sounded kind of fun. Something involving a boxing ring, a roped boundary she could bounce off, and an opponent to shout down in the middle of the ring when the ref asked questions about the top ten hardcovers on the
New York Times
bestseller list.

If Boone hadn’t been so lucky all his life, his gaze these days would have turned slightly stupid, even cross-eyed, considering all the tackles he’d endured in high school.

When she looked into his eyes, she was brought back all the way to fourth grade, when he’d given her an apple from his lunchbox with a tiny heart carved into it with his thumbnail. He’d liked her for about five minutes. And then he’d moved on to some other girl—literally, by the time she’d finished eating that apple.

The Paul Cain Omnibus by Cain, Paul
Heaven Help Me, Or Hell Have Me (Heaven Help Me #1) by Jolyn Palliata
Royally Jacked (Romantic Comedies, The) by Burnham, Niki
Collected Prose: Autobiographical Writings, True Stories, Critical Essays, Prefaces, Collaborations With Artists, and Interviews by Paul Auster
The Siege of White Deer Park by Colin Dann
The Path of the Storm by James Maxwell
The Divide (The Divide Series Book 1) by Kaitlyn Kroner
Demonic by Ann Coulter
A Four-Gone Conclusion: Lone Star Lovers, Book 5 by Delilah Devlin
Wading Into War: A Benjamin Wade Mystery by Scott Dennis Parker