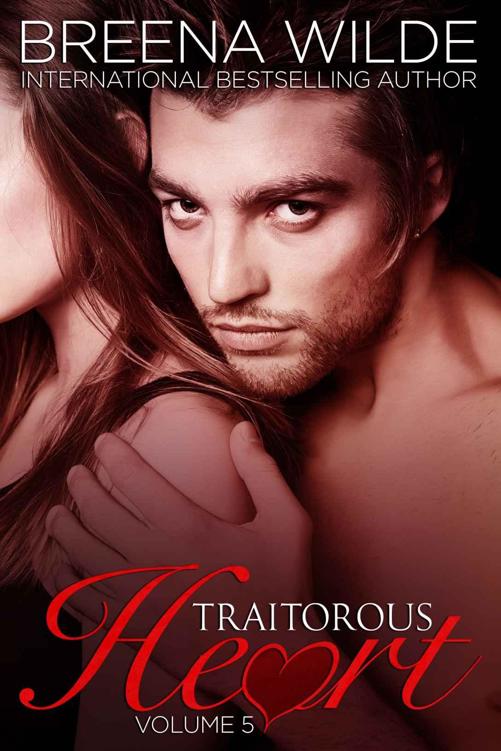 This book in its entirety is licensed for your personal enjoyment only. This book may not be re-sold or given away to other people. If you would like to share this book with another person, please purchase an additional copy for each recipient. Thank you for respecting the hard word of this author.

All rights reserved. Except for use in any review, the reproduction or utilization of this work in whole or in part in any form by any electronic, mechanical or other means, now known or hereafter invented, including xerography, photocopying and recording, or in any information storage or retrieval system, is forbidden without the written consent of the author, Breena Wilde, P.O. Box 1408 Bountiful, UT 84011.

This is a work of fiction. Names, characters, places and incidents are either the creation of the author’s imagination or are used fictitiously, and any resemblance to actual persons, living or dead, business establishments, events or locales is entirely coincidental.

This book is dedicated to rock star groupies and to those who thought life would turn out one way, but it ended up totally different.

Special thanks to my awesome cover artist, Steven Novak. To my editor at Clean Leaf Editing, Mary Johnson Heiser. To Timi Heiser for the lyrics, and especially to my family. You’re all rock stars to me.

She wants just one night with him but fate has other plans.

Griffin is supposed to be leaving. He and his band Crushed Velvet have a meeting in L.A. with Warren Records.

Birdy is still in jail, accused of murder.

Katie cares for them both and wants them to be happy, but the deeper she digs the more she learns about the people she thought she knew, and it isn't pretty. It's traitorous, in fact, and Katie isn't sure how to handle what she discovers.

Except maybe by losing herself in Cage Devereux’s embrace.

I was back in Cage’s apartment, staring at my reflection in his bathroom mirror. A sultry female voice sounded from a stereo. I listened to her sad song and thought about being back like I’d never left. Except in the last forty-eight hours, my life had been turned upside down. Again. I’d always been an only child, secretly wishing for a sister. All this time I’d had one, only I hadn’t known it.

Then there was Griffin. I’d met him at The Attic. At the time I’d believed I wanted a one-night stand. That had quickly turned into more. Sex. Clue. More sex. And more sex. My body responded to his touch in ways I never imagined possible. When we first met I’d told him not to fall in love with me. It’d been a joke, but it turned out I didn’t need to worry. He was practically engaged to some rich girl. According to her they’d fucked earlier today.

I glanced at my phone. Two in the morning. Okay, they fucked yesterday, but still. God, the rich were freaks.

My phone pinged and I jumped, letting out a yelp.

“You doing okay in there?”

Cage was waiting patiently for me in his room, probably looking totally hot and naked. I’d alluded to the fact that Cage and I might get together. Now that I was at his apartment, I wasn’t so sure that was a good idea.

The text was from Griffin.
Thought we might spend some time together tonight. I need to see you.

I debated whether to respond. The asshole’s text suggested that he wanted to get with me… after that girl at The Attic told me he’d been with her. I wanted to pound Griffin in the face. I texted:
Not going to happen. I know about your fiancée. Heard you spent some quality time with her before playing at The Attic.
I hit send
.
Then decided to add more
. I thought you were different. Obviously not. Don’t text. Don’t call. I don’t want to see or speak with you again.

I hit send, my heart racing.

“Dandelion.” Cage knocked on the door.

I realized I’d been in the bathroom almost an hour. “Um, yeah. Almost done.” I turned on the water, patted a little on my face. My eyes were haunted, large, and anxious.

I took a deep breath and leaned against the counter. “Sure.”

The door opened. He stepped inside and closed the door behind him, leaning against it. “What’s going on?”

I swallowed and crossed my arms over my chest. “Nothing. Just not feeling the greatest.” That was the truth. My stomach felt tied in so many knots I doubted they’d ever come out.

“You want to talk about it?” Cage tucked his hands in the pockets of his slacks.

I snorted, picking at a thread on my denim dress. “Right. Because that’s what you want to do. Talk.”

He pushed off the door, coming close. “I like you, Dandelion. I want to get to know you. If something more happens it’ll be because we both want it to.” He pulled me into his arms. “So, yes. I do want to talk.”

I allowed him to wrap his arms around me, then let my head relax against his chest. I breathed in his manly smell of aftershave and soap. His hug was amazing.

“Are you going to talk to me?” His low voice caressed my hair and rumbled in his chest.

“I don’t know where to begin.” I sniffled, unable to accept he was really interested. I pulled back, glancing up into his handsome face. “I should just go.”

I grabbed my phone and purse off the counter.

I gently pulled from his grasp, opened the door and went into his bedroom.

“It isn’t that hard. Just tell me one thing. The first thing that pops into your mind.”

I paused. The image that first came was of that girl from the bar. “Griffin is engaged,” I said softly.

Cage’s response made me smile. “Yeah, that’s what I thought.” I turned to face him. He was leaning against the wall in the doorway. His arms were casually crossed over his chest. Light from the bathroom hit his short blond hair, keeping his face in shadow. He really was beyond good looking.

I sat on the edge of his bed. “I don’t really have a right to be mad. We never agreed to anything exclusive. Besides, he’s going to L.A. at the end of the week, will probably sign a contract with a record label, become a rock god, marry his fiancée, and live happily ever after.” Saying the words aloud made me sick. “There’s no place for me in his life.” Without a doubt I knew that was true, but I wasn’t ready for him to be out of my life. He’d been there for me when no one else had, and when we fucked? My body shivered at the memories.

“No one schedules a place in their lives for a relationship. At least no one I’ve ever met. They just happen, and you make room.”

I raised an eyebrow.

“If the other person is important, you make room.”

“Well, I’ve had my life planned out since I was eleven.”

Cage sat beside me, reached over, and took one of my hands. “How’s that going for ya?” He laced my fingers with his.

I didn’t want to answer. His words struck at the heart of my problem. Up until a few months ago, my plans had been going exactly as I planned. Now they were all fucked up. I blinked back the tears lining my lashes. “Worse than expected,” I admitted.

“I don’t know Griffin. I’m sure he’s a great guy, especially if he caught your attention.” He shook his head. “But if he isn’t willing to put you first, then he isn’t worth your time.”

“Logically, I know that. But, in here—” I pressed my free hand to my chest. “It hurts.” I couldn’t believe I was telling him exactly how I felt about Griffin. Doing so broke the code when it came to girls talking to guys: They didn’t want to hear about previous relationships.

Cage lifted my hand and kissed it. “I’m so sorry, Dandelion. If it makes you feel any better I can understand how you’re feeling.” He seemed hesitant to say more.

“You recently broke up with someone?”

He glanced away, his eyes focusing on a point behind my head.

“It’s okay if you don’t want to talk about it.”

Cage smiled, a sad, faraway smile. “We met our senior year in high school. It was that love at first sight kind of thing. Once we were together I believed she was the only person for me. It’s embarrassing to admit, but I would get sick when we weren’t together. I needed her. She was the air I wanted to breathe, the only food that could sustain me.”

I swallowed. All I could do was listen. I’d never felt so strongly for a person before. “What happened?”

His jaw clenched. “She didn’t feel the same way about me,” he said quietly.

“Ouch.” Pain at the memories rolled off him.

“Yeah, after I graduated high school I needed to get away. I’d pissed away high school and didn’t have the grades or the money for college, so I did the only thing I could at the time. I joined the Army.”

His laugh was harsh. “What the fuck was I thinking?”

“At first. It was hard, and I’d been a lazy teenager. But by the end of basic training, that all changed.”

“Why’s that?” It was cool listening to him talk about his past. Reid and I rarely did that, and Griffin? I knew next to nothing about him.

“My sergeant kicked my ass physically on a regular basis. Called me out on all my shit… sometimes to the extreme, but I needed it.”

“At first it was. But one day, after fifty push-ups, the Sarge got in my face. He said, ‘You gonna be an asshole your whole life or are you gonna make a goddamned difference?’”

Cage looked at our hands linked together. “I didn’t know what to say. The Sarge got even closer. ‘Well, what’s it gonna be, asshole?’

His words struck a chord. I didn’t like that he’d chosen for me. He’d decided my fate by calling me asshole. And I realized I didn’t want that. So I said, ‘I’m going to make a goddamned difference, sir.’” Cage smiled. It was one of those smiles reserved for a great memory. “I’ll never forget the look on his face. ‘Bout fucking time, Private.’ Then he moved on to harass the next guy.

“So that’s why you became a lawyer? To make a difference?”

Cage stood. “That’s another story for another day. It’s late and I’ve already talked too much.” He glanced at his watch. “Actually, it’s really fucking early. We should get you home.”