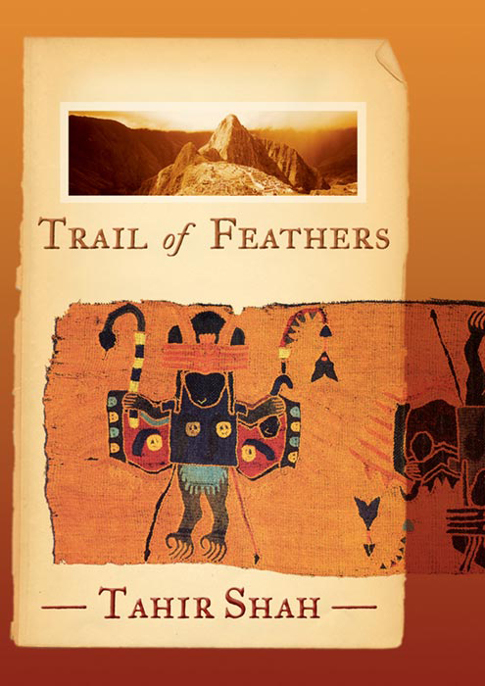 All Rights Reserved. No part of this book may be reproduced in any manner without the express written consent of the publisher, except in the case of brief excerpts in critical reviews or articles. All inquiries should be addressed to Arcade Publishing, 307 West 36th Street, 11th Floor, New York, NY 10018.

Arcade Publishing® is a registered trademark of Skyhorse Publishing, Inc.®, a Delaware corporation.

First published in Great Britain in 2001 by Weidenfeld & Nicolson

I am grateful to Richard Fowler,
IOI
st
Airborne Division, for keeping his promise.

Perhaps where Lear has raved and Hamlet died On flying cars new sorcerers may ride
.

2   Valley of the Dead Pilots

24  Trumpets of the Devil

27  Flight of the Birdmen

The trail began at an auction of shrunken heads. Anxious with greed, a pack of dealers and curiosity-hunters pushed into the library where the sale was about to begin. They had come by strict invitation, as the learned British society was eager to avoid the press. In the current climate of political correctness trophy heads are regarded as an embarrassment, something to be disposed of as quietly as possible. For years I had been an admirer of this unusual handicraft, and was desperate to start a collection of my own. Even though I'd managed to squirm my way onto the underground auction lists, I was lacking the funds of a serious collector. The shrunken head business is a small one, with only a few major players world-wide. I recognised most of them, as they lolled back on their chairs, their wax jackets wet with rain, their hands damp with sweat. All were well aware that such exquisite
tsantsas
are rarely put up for sale.

Wasting no time, the society’s secretary held up the first miniature head. Framed in a mane of jet-black hair, its skin was gnarled, its facial features distended. The nose was dark and shiny, and the lips had been sewn together with a magnificent length of interwoven twine. The dealers leaned forward, and swallowed hard, as the bidding began.

Fifteen minutes later the auction was over. All eleven heads had been sold to the same Japanese collector. Well-known and equally well disliked, he’d been trying to corner the shrunken head market for years.

As we filed out, I got chatting to an elderly Frenchman. He was wearing a Norfolk jacket and brown suede brogues, and said he’d come from Paris for the sale. Like me, he was going home headless and empty-handed. We shared a mutual interest in ethnographic curiosities. I lamented that, once again, the crème de la crème in
tsantsas
was going East, to Japan.

The Frenchman looked me in the eye and said that if he were forty years younger, he would drop everything and go to Peru.

‘Not for shrunken heads’ he replied, ‘but for the Birdmen.’ ‘Who are the Birdmen?’

The man buttoned up his jacket, smiled wryly, and walked off into the rain. I didn’t go after him. For, at shrunken head sales, you get more than the usual smattering of madmen.

A week later a long manila envelope fell through my letter-box. It was post-marked Paris. Inside was a rust-coloured feather and a slip of paper. The feather was evidently old. Three triangular notches had been cut into one side. It appeared to have been dipped in blood many years before. On one side of the paper was a crude sketch of a man with wings; on the reverse was a single sentence in classic French script. It read:

‘… and the Incas flew over the jungle like birds. Calancha.’

I assumed that the Norfolk-jacketed Frenchman had sent it, and I wondered what it meant. Was there a connection between shrunken heads and men with wings?

While at the British Library a few days later, I looked up ‘Calancha’. There was only one author by this name, Friar Antonio de la Calancha. A single work was credited to him. It was entitled
Crónica moializada del Orden de San Augustin en el Peru
. Bound in dull speckled calf, with dented corners, it was a huge book, as long as the Bible. The tooled spine was embossed
Barcelona 1638
. Eight woodcuts adorned the title page. They showed Catholic monks civilising a tribal people, whose bodies were decorated in feathers.

Were these the Birdmen?

From what I could make out, the text rambled on about taming peasants and teaching the Catholic message. I could see no mention of Birdmen.

I left the library but couldn’t stop thinking about the flight of ancient man. We all know the tale of Icarus. When he flew too close to the sun, the wax on his wings melted and the feathers fell apart. There’s an Arab version as well: Abu'l Qasim ibn Firnas, the ninth century ‘Sage of Spain’, who made a pair of tremendous wings, cloaked himself in feathers … and flew. But like Icarus before him, he crashed to Earth.

The more I ran the Frenchman’s quote through my mind, the more it teased me. Had the Incas glided over the jungles or had flight begun, as we are always told, a century ago with the Wright brothers? Days passed, and I found myself thinking of little else. I tried to contact the Frenchman, but without luck.

An old fixation was coming to life again. As a teenager I had been obsessed with aircraft and flying. At sixteen I nagged my parents into buying me an air-pass valid for unlimited flights around the United States. For a month I flew from one airport to the next, without ever leaving the aviation system. I slept on departure lounge floors or, better still, took night flights across the nation. I lived on airline food, and prided myself on the fact that I never once paid for a meal. I remember thinking that I’d hit upon a new form of existence, and wondered whether in the future everyone would live like me.

A friend suggested that I check for a mention of primitive flight at the library of the Royal Aeronautical Society. At noon the next day, I cycled through the pouring rain up to the Society’s lavish headquarters, a stone’s throw from Park Lane.

By any standards the Royal Aeronautical Society is a mysterious institution. Rather like a gentlemen’s club, it is shrouded from the prying eyes of commoners. Once you’re inside, you wonder how you could never have known about it before. Strangely, the Society was established in 1866, a full thirty-seven years before the Wright brothers made their first powered flight. The eighth Duke of Argyll, its founder, must have known he was onto a winner. Perhaps, I pondered, he had known of flight in more ancient times.

Pushing open the door to the library on the third floor, I slipped inside. A modest-sized room, looking out onto the gates of Hyde Park, it was laid with maroon carpet and cluttered with desks. Half a dozen wintry gentlemen were sitting in silence, poring over picture books of early fighter aircraft.

I trawled the rounded shelves for a mention of the Incas or Calancha. Most of the books were concerned with twentieth century aviation. A handful of forward-thinking pamphlets about aircraft had been printed during the 1800s. None referred to the Incas, though. Dismayed at the lack of relevant information, I approached the librarian’s office.

From the moment he first saw me, I could sense that the thin, bald librarian had branded me a trouble-maker. He glanced down at a half-eaten Marmite sandwich, in a nest of tin-foil on his desk. Then he looked up and blinked. I explained my interest in the Incas. Had he heard about Calancha’s chronicle? Did he know whether the ancient Americans had actually flown? Was there a connection between ancient flight and shrunken heads?

Spreading a single curl of hair across his polished head, the librarian gnawed at the sandwich, and grimaced.

‘That’s right, I’ve heard they flew … over the jungles of Peru.’

The librarian raised an eyebrow.

‘When did all this happen?’

‘Before
the Wright brothers?’

I did a quick calculation.

Choking down the last bite of bread, he said he’d see what he could find.

Half an hour later, he stumbled over with a single A3 sheet. ‘This is all we have,’ he said.

I glanced at the page, a clipping from
The Brentwood Review
, 8 March 1985. The main photograph showed a moustachioed man hurling into the air what looked like an oversized pillowcase. I scanned the columns. The article focused on a retired cash machine repairman, called William Isadore Deiches. A self-proclaimed expert of flight in ancient times, Mr Deiches, so the article said, had cracked a secret code, and could build a flying carpet. He could even make a doormat fly - for Deiches had deciphered aircraft designs from several countries, including Egypt, Japan, Tibet, Mexico and Peru. And, the piece explained, he had even written a book on the secret lore of the Pyramids.

Mr Deiches was my only lead. Somehow he must have worked this out when I called him. His response implied that only desperate people telephoned the Deiches residence. A child-like voice answered the phone.

‘I know how they built the Pyramids’ it said.

‘You’ll never guess how they did it.’

‘I want to know if the Incas flew’ I said, changing the subject.’ ‘Course they did,’ the voice replied easily. ‘Are you
sure?'

‘You’d better come round and have a chat.’

2
Valley of the Dead Pilots

William Isadore Deiches opened the door to his Brentwood maisonette no more than a crack. The iris of a single ice-blue eye widened as it observed me. I whispered my name. The door slammed shut. I stood firm and repeated my name. A security chain clattered, and was followed by the sound of unoiled hinges moving slowly. I greeted Mr Deiches. A man of retirement age, he was of average height, with a slender neck, thin lips and an aquiline nose. His hair was concealed by a black Stetson, with a tan leather band; and his skin was oyster-grey, wrinkled like rhino hide.

‘Can’t be too careful,’ said Deiches, leading the way through the hall, into the lounge, ‘there are a lot of crackpots out there.’

It might have been a pleasant spring day in Brentwood, but the maisonette’s rooms were frigid, dank and smelled of death. Remembering that I’d come in the name of scientific research, I sat down in a low armchair and braced myself. Around me, the scarlet paisley wallpaper seemed to be closing in. Ring-binders were piled up everywhere, and a clutch of mangy soft toys poked out from under a coffee table. Crumbs from a thousand TV-dinners circled my chair.