Trading Paint (Racing on the Edge) 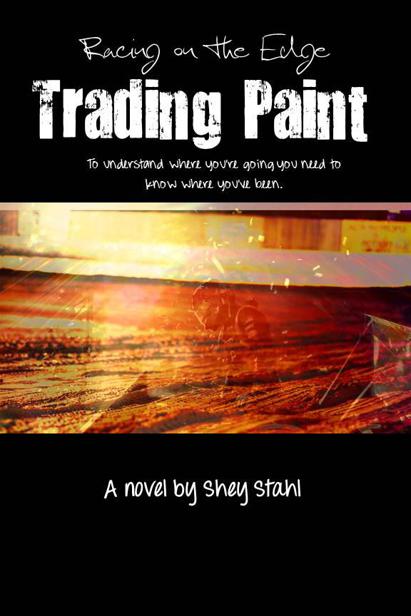 Racing on the Edge

To understand where you’re going you need to know where you’ve been.

A novel by Shey Stahl

This book is a work of fiction. Names, sponsors, characters, places, and incidents are the product of the author’s imagination and are used fictitiously. Any resemblance to actual events, locales, or persons, dead or living, is coincidental.

The opinions expressed in this book are solely those of the author and do not necessarily reflect the views of NASCAR, its employees, or its representatives, teams, and drivers within the series. The car numbers used within this book are not representing those drivers who use those numbers either past or present in any NASCAR series, USAC or The World of Outlaw Series and are used for the purpose of this fiction story only. The author does not endorse any product, driver, or other material racing in NASCAR, USAC or The World of Outlaw Series. The opinions in this work of fiction are simply that, opinions and should not be held liable for any product purchase, and or effect of any racing series based on those opinions.

To understand where you’re going you need to know where you’ve been.

All rights reserved.
Except as permitted under the U.S. Copyright Act of 1976.
No part of this publication may be reproduced, stored in or introduced into a retrieval system, or transmitted, in any form, or by any means (electronic, mechanical, photocopying, recording, or otherwise), without the prior written permission of Shey Stahl.

Racing on the Edge site
:

Originally, I never planned to release this book. It was more of
a
I-had-to-know book. For me, I wanted to know where these characters had come from. So I wrote Trading Paint after I finished Black Flag. That’s when I realized just how important Trading Paint was to the development of not only Sway and Jameson, but their love for a sport that consumes their lives both on and off the track. And it was then that I knew to appreciate all the books in the series, this one needed to be released as well. And without
the you
-need-to-do-this pushing from my friends Linda, Callie and Daina, it might never have been in print. So thank them!

A special thank you to my husband, honey girl, my parents, my siblings who tolerate me, my friends and my readers for making it possible for me to write.

This book is dedicated to my dad, PJ. Without your knowledge of racing, stories of Republic and changing engines on the freeway, this wouldn’t have been written. Thank you.

A man is a product of this thoughts what he thinks, he becomes.

I had commitments now as well as obligations, fans, sponsors
...
the list endless.

If I thought it would get easier, I was in complete denial.

So when would I ever get a chance for me?

Sure, I loved what I did. This was what I always wanted and had worked so hard for. Racing was my life—my passion.

Somewhere between leaving home to chase this dream, and now, I felt something missing.
Her.
The one that changed everything I thought I knew with one look.

For the longest time, I avoided the fact that I was in love with Sway for one simple reason. What if she loved me back?

If I didn’t want to lose her, how long would I let this go on? I have only ever had physical encounters. So how could I have more?

Just simply being my friend came with a price tag—imagine if she were more? How would that affect her life and how could I do that to her?

I knew my life would never be normal but I wasn’t about to take any sense of normalcy that she had away from her. How could I? Sway never had a say in anything and Charlie proved that.

Was it fair that she would soon have responsibilities that no twenty-two year old should have?

No. The difference between her and me was that I asked for this. I knew the sacrifices I would have to make and was prepared for them from the beginning. She wasn’t.

She had no idea of the pressure or opinionated populace that was out there. Being pessimistically jaded, I didn’t want her to know that side of the world but I soon wouldn’t have a choice and neither would she.

Consequently, I knew my decision was wrong but I also knew that if nothing in life was free, then I was ready and willing to pay anything for her happiness.

Bear Grease – Slang term used to describe any patching material used to fill cracks and holes or smooth bumps on a track’s surface. Bear grease can also be used as a sealer on the track.

“Can I please race? I mean, dad
...
I’ve been racing quarter midgets for years and now midgets. I’ve already raced in about a hundred USAC races.” I whined. “I just—I think I’m ready.”

I’d been racing midgets in the USAC (United States Auto Club), a sanctioning body for midgets, sprint cars, and silver crown cars; for far too long and I couldn’t wait to race full sized sprint cars.

From the time I was little, they were the cars that caught my attention. They were loud and the fastest cars on dirt with their high power to weight ratio.

The sound produced by twenty sprint cars lined up on a track, revving their engines is definitely something you will never forget, especially when you’re a kid. The sound shook the ground and the air filled with the sweet aroma of methanol. Sprint cars broad sliding their way around dirt tracks was enough to catch the eye of any kid but when you see one doing wheel stands inches away from concrete walls.

Briefly, his eyes focused on me.

“You’re not ready,” my dad said and walked into the race shop that housed his sprint cars.

I smiled following closely stepping over the tires and tools scattered around the concrete floor.

“Are you scared I’ll smoke you?”

His head whipped around, his blue eyes narrowed. “You’re an arrogant little shit. But no, I’m afraid of your mother.”

“I can handle that.” I told him confidently heading for the house. My mom was a push over for me and I knew it, as did she.

You hear people talk about when their career started for them or when they saw their first race but I honestly can’t remember when that was. Racing has always been there, ingrained into my life in every way. My dad was racing before I was born so it’s all I’d ever known. I’d been playing in the dirt of the pits since before I could walk.

I do remember when I got my first set of wheels.

I believe I was three, or just turned four. Sure, I had a badass big wheel that I’d perfected slide jobs on but I remember my first beast with an engine.

For my birthday that year, my parents gave me a cherry red 150cc Honda go-kart. That, combined with the perfect paved circle driveway, made my four-year old world. My only rule for riding it was stay on the pavement.

Growing up with a dad who raced on dirt and that being all you had been subjected to
was
tall orders for a four-year old wanting to be just like his dad.

I had the quickest route around the circle panned out within the first day I got it and soon began broad sliding through the corners when I pitched it hard enough.

That red beast became my prize possession and if you didn’t hear the humming from the engine, you knew something was up. Soon after they bought mine, my older brother Spencer got one and before long, we were holding races in our driveway and tearing up my mom’s flowers while our little sister Emma acted as the flagger. We must have torn up every plant, every tree and every blade of grass in that yard before the summer was out.

The following year, once the weather had turned warm enough, we were back to doing the same thing.

That’s when I decided some adjustments needed to be made to the kart.

Like adjusting the rev limiter to enable it to exceed its standard speed that clearly wasn’t fast enough and ending up cutting the break line instead. Yeah, at four I thought I was some kind of mechanic. It was evident by the gaping hole in the side of our house where my kart flew threw it that I was no mechanic.

After a while, the “Keep in on the Pavement” rule was out the window and I pretty much raced on any surface.

The following spring, just before I turned five, my dad took me with him to his race in Knoxville, Ohio where he was racing on the World of Outlaw Tour; the premier division for winged sprint car racing.

That same weekend, Bucky Miers, my dad’s long-time friend, let me tear it up in his son’s quarter midget.

Two weeks later, we had one sitting in our driveway when we returned. Before long we outgrown the driveway and my mom had no landscaping left so dad hauled in a few truckloads of clay and made a quarter mile dirt track in our backyard.

Naturally, I never got out of the car or off the track. Some nights I even fell asleep out there.

Originally, I was supposed to share the car with Spencer but once Spencer found girls and football he didn’t care about racing like I did.

You could say my career started right there in my back yard in that quarter midget.

My racing teeth were eventually cut at our home track in Elma, Washington at Gray’s Harbor Raceway on June 18, 1985, a few days shy of my fifth birthday, as I made my first start in a quarter midget
race
.

Elma is a 3/10 mile semi-banked clay oval track located off Highway 8 and it was fast—incredibly fast.

The Marx Sisters by Barry Maitland
The Ironclad Prophecy by Kelleher, Pat
Alone by Chesla, Gary
Guns Of the Timberlands (1955) by L'amour, Louis
The Empty Family by Colm Tóibín
Stand Against The Storm (The Maxwell Saga Book 4) by Peter Grant
Heart of Africa by Loren Lockner
Wrecked by West, Priscilla
White Thunder by Thurlo, Aimee
Freefall by Anna Levine