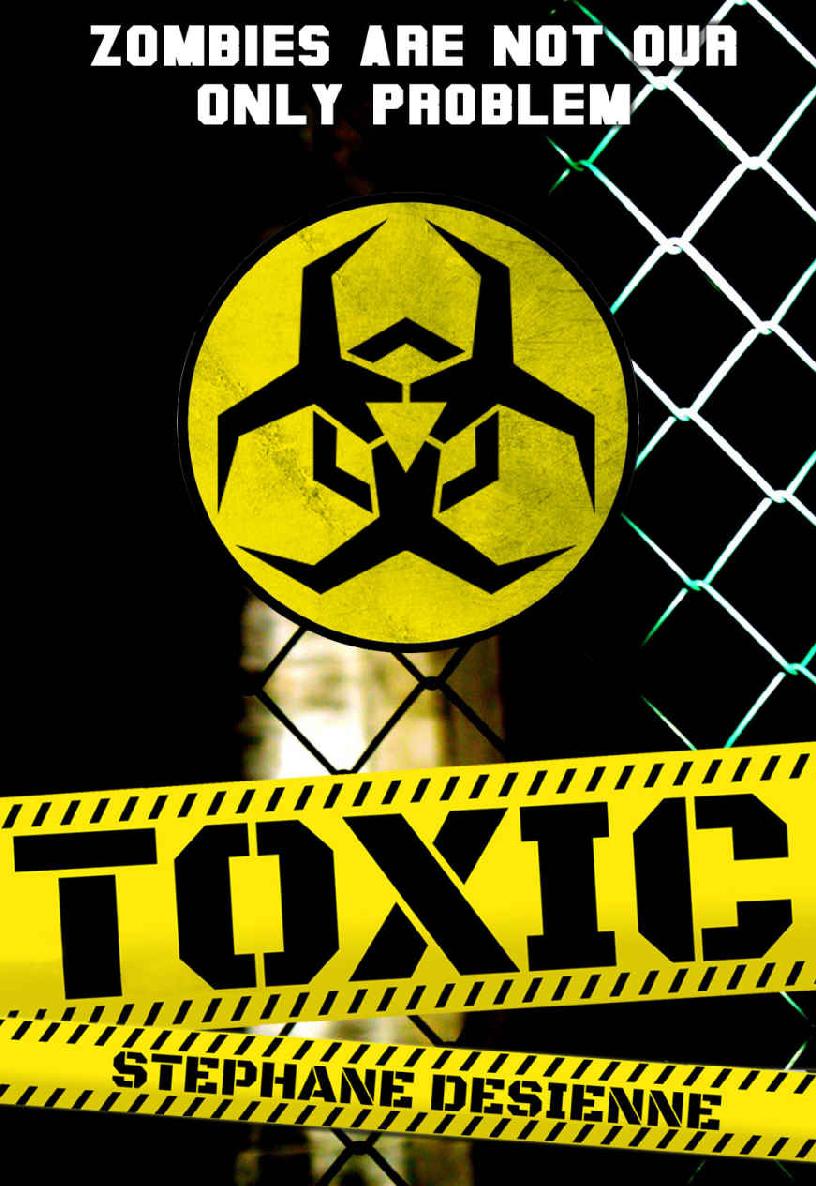 An unknow virus has decimated most of earth’s population, leaving pockets of human resistance fighting with hordes of zombies. From the sky came salvation: Aliens. Unfortunately their motive is not altruistic, they came as a commercial enterprise to hunt and export humans whose flesh is considered a highly prized delicacy… that is of course when it is not contaminated. Naakrit, the alien expedition leader has been mandated to coordinate the traffic of human flesh from his headquarters in Dubai. To succeed he needs to manage Jave, an alien plant-based hybrid who is overseeing his operation, and the spread of the unexpected zombie virus who is quickly depleting the stock of viable human flesh. In the meantime, a rag tag team of humans is trying to survive. They are led by Elaine, a nurse with nerves of steel...

“T
he supply of human products is under threat.”

Naakrit Ot from the Kulari clan put down his glass onto its metal coaster. His three scaly fingers caressed the curve of the milky white bone handle. His expressionless, striking green eyes observed the reactions of the special envoy. That one there, the Merchant Prince of the Combinate, contented himself by picking at his food once again. His jaws opened and closed without making the slightest noise. He dressed the human finger that he had just grabbed with a spicy condiment before bringing it to his lips. The cracking of the finger bones crushed by his chewing broke the silence. When he finished, his insectoid abdomen buzzed.

“We have invested a lot of influence, and not to mention material means, in supporting this expedition. We are counting on a significant return, which lives up to our... expectations.”

A shrewd negotiator, he brought up the terms of the agreement. Threats would come later. They both behaved like civilized creatures, without animosity, waiting for their eventual chance to get their way by force.

“I am perfectly aware of that, Your Excellency. I assure you that your interests remain my priority.”

“I'm thrilled. According to our analysts, sales forecasts for human products are promising substantial increases. They also suggest that there is even a luxury market for these fingers.”

His legs, made of a hard shell substance, stirred around in the pile of fine dishes, which according to official sources, would be worth a small fortune in no time. He grabbed another finger, this time with dark-colored skin. Naakrit reeled with satisfaction, his tongue rolling up into the back of his throat. Billions of living creatures found humans to be to their taste and they were the ones who set the price. That was all that counted.

“As the primary investor, you will have a distribution monopoly which covers large sectors of the Commercial Collective.”

“As long as you fulfill your commitments,” the Merchant Prince reminded him.

“I hold the rank of Primark in my company, which has always honored its signature. A contract is a contract.”

“Perfect. So, why is this shipment practically empty?”

Its storage capacity bordered on one million cryoconserved corpses. Mercenaries called it the freezer and at the moment, it held barely one hundred thousand units. Far from the numbers of its previous delivery. The Combinate managed its affairs with a seriousness that was at times mortal for those who tried to deceive them. Naakrit had to reassure his investors completely while nonetheless making the grave reality of the situation known to them. A subtle balance when confronted with this envoy who was high-ranking in the hierarchy judging by his escort:

“I think it's necessary for you to understand the nature of the problem by yourself.”

The prince straightened up his oblong head, covered with short antennae. The dim light of the gangway was reflected in his eyeballs and the billions of microalveolae that they were composed of.

Naakrit had been brooding on this discovery with the same caution as a female guarding her eggs. Because of this, he had organized the meeting on neutral ground, a place kept secret, outside of the holding. Even if he enjoyed the privileges of an exclusive license, that didn't protect him from unscrupulous competitors, pirates or a coup carried out by his clients. The megatransporter floated on the edge of a distant solar system dominated by a giant star. He led the way, two steps ahead of His Excellency, who was flanked by the Combinate troopers. Their carbon body armor gave off no reflections. Mortal shadows seemed to levitate in silence. The procession passed a series of airlocks and then followed a platform which descended onto a bridge large enough to allow several terrestrial vehicles to circulate in front of them. The rust-colored walls were lost against a foggy ceiling. The reptilian invited his guest to follow him. The condensers and refrigerator circuits caused extreme temperature gradients and humidity glazed the atmosphere. Far from comfort and even further from the luxury of the guest quarters from which they were descending, he activated the integrated heating system of his biosuit. Members of his species didn't have an organ which provided them with efficient thermal regulation. While low temperatures caused numbing or loss of motor skills, extreme conditions without protection caused ice delirium and death. Here, he wasn't at risk; but even so, he always felt uncomfortable when he visited this sector.

In front of a panel, he entered his passcode into the touchpad. The hallway led to a holding bay converted into a laboratory which was split in two by a bay window running along its whole length.

He stretched out his arm in the direction of the scarlet spectacle. Crimson stains covered the hospital-white partitions and carcasses in multiple stages of dismemberment blanketed the floor. In the middle of a pile of bones and flesh, a human was standing. He seemed to be overwhelmed by uncontrollable ticks and moved around while dragging his right leg, which didn't look functional. The remains of what was once clothing partially covered his pale skin, which was spotted with bruises that were turning into a putrid black color. With one quick gesture, Naakrit summoned the virtual projection. He selected an icon, and all of a sudden, they witnessed a litany of grunts and whines. The Merchant Prince caressed one of his antennae. “The creature is unfit for consumption?”

The reptilian confirmed it. “The virus impregnates human flesh to the point that they become impossible to treat for commercial use.”

“How many units are spoiled?”

Naakrit turned away from the floating display. The truth had become necessary. Concealing vital information from the Combinate was a certain way to end his existence in frightening conditions.

“Seven and a half billion.”

The prince took in the news without falling apart.

“You can’t sell them as slaves?”

“Alas, no. They only obey one single stimulus.”

His claw touched a command bubble. An opening appeared and a furry quadruped adventured inside. Before the hatch had closed, the human launched himself, with Naakrit cutting the sound at the moment when the goat started to whine. The special envoy observed the spectacle without reacting. When the animal had ceased to quiver, he declared that he had seen enough.

They left the holding bay and on the platform, he leaned in with one of his antennae:

“There are still healthy products, right?” he questioned in a shrill voice.

“Several millions, though their number is in decline. They are spreading out, which makes locating them complicated. As a consequence, the capture rate has plummeted, which explains the resulting drop in delivery quotas.”

“All this doesn't please me.”

The prince didn't possess the power to make decisions. His role consisted primarily in reporting to the Combinate, who would take the necessary measures. Nonetheless, his investors had a regard for his opinion and the issue of trust would be addressed in any case. He knew it. His reputation, he hoped, would play to his favor.

The main bridge opened onto the glowing orb of a star at the end of its life. The obese globe engulfed a volume of space which has previously been occupied by a series of worlds of which there remained a few scorched stones following eccentric orbits.

The prince turned away from this spectacular panorama lifelessly. “What is this famous third planet called?”

“It doesn't have a name. We referenced it on a registry, but the locals use the name Earth.”

“A world with very high potential, Your Excellency, the reason for which I am keeping its location secret, as I am so authorized to do according to the law.”

“Of course,” the prince confirmed. “How long does it take to orbit its star?”

“A little longer than an octan.”

“Perfect. That's the amount of time you have to fix this sanitary problem.”

Princes were authorized to issue orders. This one would certainly be approved by the members of the counsel. Naakrit bowed respectfully. His tongue whistled feigning thanks.

“Be well aware that your reputation is granting you a favor. If you fail, the Combinate will exert the necessary pressure to annul the exclusivity of your license.”

In other words, serious competitors, smugglers, hired mercenaries or governmental forces would invade his territory. The threat was very clear. The Primark assured him that the situation would return to its normal course in a short time as well as deliveries, which was the important point.

Naakrit accompanied the envoy and his entourage back to the airlock connecting the cargo gateway to the liaison vessel.

“One more thing,” the prince announced. “I have sent a request for you to be assigned an observer who will operate under your authority, of course, but who will remain independent.”

Opposing a member of the Combinate implied consequences. Naakrit didn't let any of his anger show through and assured him that he would be granted the best of welcomes.

The Primark avoided even the smallest remark.

Back in his quarters, he served himself a drink and sat down on his artificially-heated volcanic rock bench. The heat soothed him while his mind burned with plans. He found himself seated on top of a source of boundless wealth transformed into worthless vermin. In the past, he would have simply abandoned the affair and moved on to something else. The amount of debt taken out to acquire the exploration license didn't allow him this freedom to maneuver. The enterprise was plummeting towards ruin and he risked his scales as a part of it. He consulted the inter-species database and scanned through the first entries concerning Lynians, a semi-vegetable, semi-carnivorous race. A carnivorous plant, to sum it up.