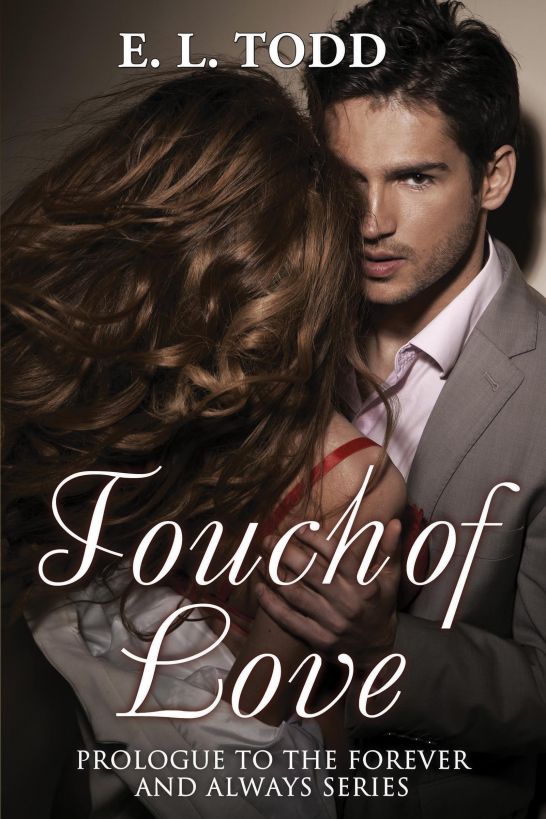 Prologue to the Forever and
Always Series

This is a work of fiction. All the
characters and events portrayed in this novel are fictitious or
used fictitiously. All right reserved. No part of this book may be
reproduced in any form or by any electronic or mechanical means,
including information storage and retrieval systems, without
written permission from the publisher or author, except in the case
of a reviewer, who may quote brief passages in a review.

Published by E.L. Todd at
Smashwords

I can’t tell you how happy I am to be
here. No, really. It was everything I imagined and hoped it would
be. I hadn’t been to the campus once, but I knew I wanted to be at
that university nonetheless. I didn’t need to see the brick walls
of the historic buildings or the elegantly designed campus that
conveyed decades of legacy and achievement. Anything was better
than where I was before.

I was a freshman at
Harvard, and I still couldn’t believe I was there. I knew I was
smart, but I didn’t think I was
that
smart. I asked my brother to
read the acceptance letter just to make sure.

He rolled his eyes. “Maybe we should
reconsider this Harvard thing. You’re pretty dumb.”

“Ryan?” My voice contained my serious
tone. My heart was racing in my chest. My brother wouldn’t lie to
me. I needed to hear him say it. If he did, it would make it
real.

He handed the letter back. “You got
in.”

He helped me move into my dorm room,
carrying everything I owned—which wasn’t a lot. It was a tearful
goodbye. I hated being on the other side of country, away from the
only family I had left.

“I love you too, Scar.” He returned my
embrace and held me tight. My brother was my best friend—everything
to me. I knew he felt the same way.

“I don’t know if I belong here,” I
whispered.

I wiped my tears away and stared him
in the eye.

“You’re right. You
don’t
belong here.
You’re
meant
to be
here. You’ll do great. I know you will.”

“Are you sure? You’re always telling
me how stupid I am.”

He kissed me on the forehead. “Just do
it. I have my faith in you. You were accepted to this university
because they believe you will succeed. You wouldn’t be here, beat
out thousands of applicants, if you weren’t capable of
it.”

“Okay,” I said with a nod, feeling
more assured.

He walked toward the door.
“You can call me for anything—
anything
.”

“I’ll see you for
Thanksgiving?”

The door opened and Theresa walked in.
She stopped and looked my brother up and down. “Hello,
handsome.”

He nodded. “You too. Be nice to my
little sister. She’s really annoying and bratty, but when you look
past all that, she’s really not that bad.”

“Thanks,” I said
sarcastically.

“Bye,” Theresa said with a wave of her
hand.

Ryan left and shut the
door.

“So, what’s his story?” Theresa asked
immediately, twirling her hair and batting her
eyelashes.

“He lives in Seattle,” I said
quickly.

“Oh well.” She walked to the mirror
and fixed her hair and makeup. She was already beautiful so I
didn’t know what she needed to check. I guess knowing you were
beautiful all the time was a confidence booster. She just liked to
look at herself. “You ready for school tomorrow?”

“Why are you nervous?”

I looked at myself in the mirror and
compared myself to Theresa. We were the same size, but my breasts
were bigger than hers. I was always a little self-conscious of
their size. I tried to make them looker smaller whenever possible.
They weren’t huge, but they were noticeable. I had more curves than
her, but I wasn’t sure if that was a good thing.

“We’ll meet some other English
majors.”

“I could use some friends.” Theresa
and I just met, but she and I got along pretty well. She was very
blunt and direct, saying exactly what she wanted and when she
wanted it. She was the ying to my yang. I don’t where she got all
that confidence from.

We left the dorm room then headed to
main mess hall. A lot of students were already there, sitting at
the tables or in the chairs dispersed throughout the room. It
reminded me of a quiet coffee shop. It was dark, very minimal light
flittered through the room. The walls were painted brown, and the
furniture was also a dark wood. There was a large red rug on the
floor.

We ordered a few coffees before we sat
down at a table. I didn’t see anyone that I recognized, but then
again, no one I knew from high school got into Harvard. It was
still surreal. I still couldn’t believe it. When I looked around at
everyone, I could tell there were a wide variety of people that
made up the student body, even international people. Everyone had a
different sense of style. I was just wearing jeans and a t-shirt,
being incredibly casual.

Theresa sipped her coffee and looked
around the room. “See anyone you like?”

I wasn’t searching, concentrating on
my coffee. I scanned the room and took a look. My eyes stopped when
I saw someone that I did like. He had brown hair, blue eyes, and
fair skin. He was sitting down, but I could tell by the length of
his legs that he was tall. His muscled chest and arms showed his
physique. He was big, but not too large and bulky. There was an
aura of confidence about him that was borderline arrogance. I don’t
know what caught my eye but something did. He was incredibly
handsome, one of the best looking guys I’ve ever seen. I wanted to
keep the treasure to myself so I didn’t mention him to Theresa. If
she agreed that he was attractive, she would sweep him of his feet.
And I had no chance of competing. “Nope.”

I took a drink of my coffee. “I’ll see
someone I like in class.”

A man came over and sat next to
Theresa. “Freshman?”

She smiled. “What gave me
away?”

“Good thing you saved me.”

The guy didn’t look at me once so I
knew I was practically invisible to him. It was high school all
over again. Theresa seemed to like the guy, so I decided to take my
leave and blend into the shadows. Without saying goodbye, I stood
up and walked to the coffee counter. I ordered some nutty latte and
it wasn’t suitable to me. Instead, I decided to order two
sandwiches, a bag of chips, and a tea. I like food and I’m not
ashamed to admit it. When I glanced back at Theresa, she didn’t
seem to notice my absence. I snuck a glance at the man I had my eye
on. He was talking to a group of friends as he leaned back in his
chair. I turned back to the counter and waited for my order to
finish.

My parents were pretty teary-eyed when
they dropped me off, but I wasn’t sure why. My brother, Mike,
already left for college so they had been through this process
before. I gave my mom a long hug to make her feel better. That
seemed to stifle her tears.

My dad clapped me on the shoulder.
“Enjoy your wild years. They run out quick.”

“And do well in school,” my mom
said.

“Oh yeah. I forgot about that,” I said
with a smile.

Now I was sitting in the mess hall
with a few friends from the private high school I attended last
year. They were pretentious douches, but I guess I was too. My
parents wanted me to take over the company after I finished my
masters, but I wasn’t sure if I ever wanted to. I wanted to make my
own money and stand on my own two feet. I was given everything in
life, never earning anything. I didn’t think I was really a man
because of that. I had to change that, prove myself.

“Their business program is the best in
the country,” Richie said. “That’s why I’m here.”

“Yeah. I just want the flashy
diploma,” Roger said. “What about you, Sean?”

I shrugged. “My parents made
me.”

They laughed. “What’s it like to be a
billionaire?”

Roger looked across the room, his eyes
widening. “We got another one.”

I knew what that meant. There was
another hot chick nearby. He did that every five to ten minutes.
The girls were alright, nothing too exciting. I wanted to bide my
time until I found someone really worth fucking.

“She’s got a nice rack,” Richie said.
“It’s hotter that she’s trying to hide them.”

My interest piqued, I turned and
looked. She had long brown hair that reached the middle of her
back. She was small with a petite frame. She was short but not too
short, less than a foot shorter than me. This girl had the right
curves in the right places. Even from the side, I could see the
curve of her tits. They were round and firm, perky and
eye-catching. They were proportional to the rest of her body. Her
ass was just as noteworthy. She was wearing jeans and a shirt that
had the school logo on it. Even in the casual clothes, still looked
sexy.

“Turn around,” I whispered under my
breath, wanting to see her face. “Come on, come on.” She stayed at
the counter, picking up two packaged sandwiches and a bag of chips
before placing them in her purse. Unless she was splitting that
with someone, she liked to eat. I liked women who ate like normal
people, none of that anorexic shit. She finally turned her face to
look in her purse, and she grabbed her wallet. My mouth
dropped.

Her eyes were blue like mine, shining
like the ocean. Her cheekbones were high and prominent, giving a
nice curve to her face. Her lips were thin and kissable, a slight
sheen glowing in the light. A small number of freckles could be
seen on her skin. She wasn’t wearing makeup. That was even hotter.
She was a natural beauty, perfect in every way. It took a lot to
impress me since I’ve been with so many women, but I was definitely
impressed by her. My cock sprang to life and twitched.

“I wonder if she’s a freshman,” Roger
said.

“Yeah,” Roger said. “I hate it when
girls pile on that shit. It’s annoying. If they look ugly with
makeup, imagine how ugly they are without makeup.”

“Good point,” I said with a
laugh.

When I looked back at her, she was
gone. My heart raced in alarm. My head scanned the room, searching
for her. “Where’d she go?” I said as I sat forward.

Richie shrugged. “I don’t know. She
must have left. Why? You’re going to go for it?”