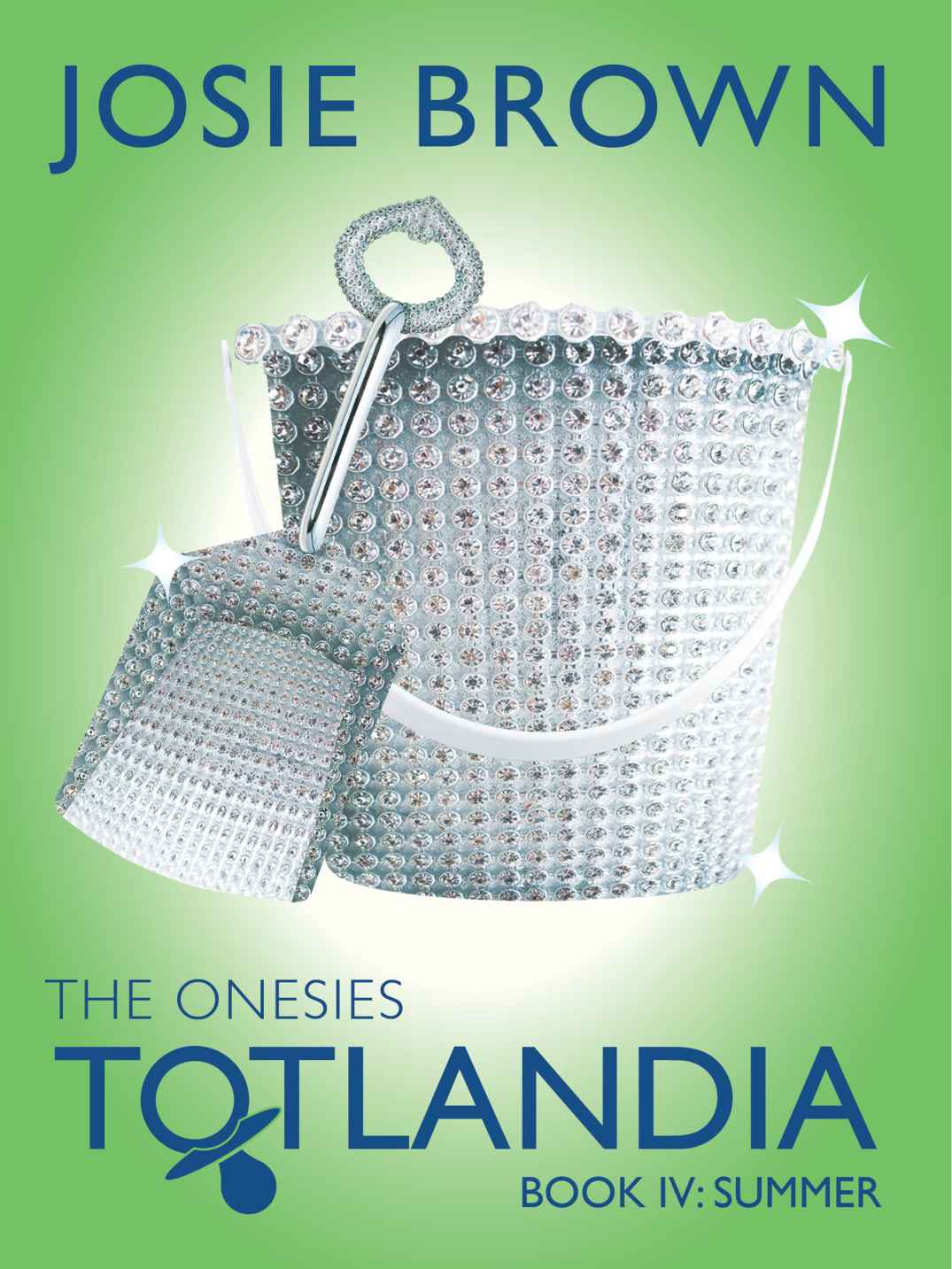 Ally Thornton was trying hard to convince herself that the throbbing pain in her head was the result of yesterday’s Mother’s Day–slash–pity party champagne hangover. Or perhaps it was the result of the already hot sun that glowed much too brightly in a cloudless San Francisco baby-blue sky.

The fact that fifty-five children in the Pacific Heights Moms & Tots Club were yelling at the top of their lungs at the sight of two pugs humping outside the tot lot in San Francisco’s Alta Plaza Park was not helping matters.

Her friends, Lorna Connaught and Jillian Frederick, were laughing, too, as were the other mothers in the club’s one-year-old playgroup. Only Lorna’s son, Dante, was quiet. Ally, numb and listless, held him in her lap as he stared in fascination at the dogs. Lorna and Jillian chased after Ally’s daughter, Zoe, and Jillian’s twin girls, Addison and Amelia, as they toddled back and forth, pointing and squealing.

Ally, too, wanted to scream at the top of her lungs, especially when she noticed two women staring at her. Both had infants strapped to their chests in ring slings. They weren’t club members—not yet, anyway. But by the envious looks in their eyes, it was obvious that an invitation to join PHM&T was something they aspired to. Like all of San Francisco, they knew the club was the first stepping stone to a network of friends and connections to the city’s best private schools.

Be careful what you wish for, ladies,
Ally thought to herself.

Noting her sympathetic stare, the short-haired blonde mom with a yawning little boy nudged the other, a tall, long-haired brunette whose child sported a little pink bow. Together they rose. Dodging the swarms of children, they made their way over to her.

Ally was not at all surprised when the brunette asked, “Excuse us, would you mind telling us if you’re a member of the Pacific Heights Moms & Tots Club?”

Ally hesitated before nodding, but she had to bite her tongue to keep from adding,
Yes, and believe me, it’s a snake pit.

“We’re so envious,” exclaimed the blonde. “We’ve heard such wonderful things about it!”

“In fact, we’re going to apply,” the brunette added. “The application seems so general, and yet I’ve heard the acceptance committee has some specific criteria in regard to new members. Can you give us a few tips that may help us get in?”

“Tips?” Ally tried not to frown, let alone cry.
Where should I start?
she wondered.
Well, at least they fit the only physical profile that passes muster with PHM&T’s Top Moms Committee. That is to say, slim, attractive, and dressed in designer jeans, even here in the playground.

Both women nodded. “Although my previous employer has asked me to do some freelance consulting,” the brunette replied matter-of-factly. “You know, just on the side, and from home.”

Seeing Ally grimace, she quickly added, “But it’s not like I have to, for financial reasons. Just to keep my skills up to par. And because I have so many contacts in my field.”

I hear ya, sistah,
Ally thought. Continuing to work part-time was one of Ally’s dirty little secrets.

But no. If the club’s founder and fearless—make that
feared
—leader, Bettina Connaught Cross, found out this woman worked at all, her application would go in the trash, along with those of all the other mothers whose lives didn’t meet the criteria of the club’s unwritten yet sacred rules.

Oh, and if they weren’t socially or politically connected, or if their husbands weren’t well financed or well connected, they wouldn’t have a chance in hell, either.

The blonde smiled brightly. “I’ve heard there are enrichment classes for the children, and field trips, too.”

“Yep, I can vouch for that. In fact, we almost lost a kid on one trip, in a corn maze.” Seeing the women exchange concerned looks, she added, “Don’t worry! We found her. Granted, Bettina wanted to set fire to it, but calmer heads prevailed.”

They nodded uncertainly before Blondie murmured, “Maybe we could skip those.”

“Nope, don’t think that would be wise.” Could they read the gloom and doom in Ally’s voice? For their sakes, she hoped so. “Attendance at every club function is mandatory—Mondays, Wednesdays, and Fridays, no ifs, ands, or buts. Or else you’ll get an
infraction.
”

The woman’s brow creased slightly. “Really? You mean it’s not just drop in, when you feel like it?”

Ally’s snort was less than ladylike, but it left the appropriate impression:
What, are you kidding?

As the women exchanged worried looks, Ally added, “Infractions make or break you in the club. For example, you can’t be late to meetings, let alone miss them. And of course, there are the challenge tasks.”

Brunette frowned. “What exactly is that?”

Ally shrugged. “Anything Bettina and her Top Moms Committee want it to be. For example, if they ‘suggest’ you should pull weeds in the PHM&T organic garden, you’re there, on your knees. Heck, if they want you to scrub their floors, you’re on your knees, too. In fact, you end up on your knees a lot in the club. Metaphorically speaking. You know, groveling and such.” She smiled. “Tell me, are you close friends?”

Brunette nodded as she patted her friend’s arm. “We met in prenatal yoga.”

“How sweet! I hope you stay that way, even if only one of you gets in the club.”

“Oh,” the women murmured in unison, as if that thought hadn’t crossed their minds.

“Hey, it happens. Not to mention the way you feel if you both get invited, and then one of you gets eliminated.”

“Eliminated?”
The word came out of Blondie in an ear-piercing squeak. “You mean, even if you’re invited to the club, you can still be asked to leave?”

Ally nodded. “Like the show
Survivor.
The committee invites more applicants than they need so that they can pit the new-member moms against each other, until only the most cutthroat are left standing. All in good fun, of course—for them, anyway. They justify it because they feel they’ve chosen the best and the brightest. The upside is that true friendships stand the test of time—and PHM&T.”

By their frowns, she doubted that theirs would last the probationary period.

She looked from Blondie to Brunette. “So, what do you think? Want to play with us?”

Brunette’s involuntary head shake was duly noted. However, Blondie’s slight smile was a giveaway that she was game for it, even as she muttered, “I guess it’s something I should mull over.”

As the women walked away, Ally thought,
Yes, dear, you do that. Oh, and welcome to the club. You’ll fit right in.

Jillian and Lorna, armed with the twins and Zoe, plopped down on the bench beside Ally and Dante. Jillian nodded toward the retreating women. “They look sweet. What did they want?”

Ally shrugged. “To pick my brain about the best way to get accepted to PHM&T.”

Jillian and Lorna burst out laughing.

“In the mood you’re in, I presume you gave them an earful,” Lorna declared.

“You’ve got that right.” Ally swapped Dante for Zoe, who immediately yanked her mother’s braid. Jillian playfully pulled on it, too. All morning long, she and Lorna had been trying to nudge Ally out of her funk, to no avail.

But Ally’s pain wasn’t physical. It was emotional. Yesterday, she discovered that Jade Pierce, one of their dearest friends, had told her a malicious lie.

Ally understood why she’d done so. Jade and Ally were both in love with the same man: Brady Pierce, who was Jade’s ex-husband. Jade’s lie to Ally implicated Brady in Ally’s ouster from the board of the company she had started, Foot Fetish.

“Jade’s been hanging with the legacies all morning,” Jillian mused. “What’s up with that?”

Ally started to say,
She’s afraid to come over here and confront me,
but she thought better of it. Neither Jillian nor Lorna knew about the tenuous triangle Ally shared with Jade and Brady.

Maybe I should finally say something,
she thought.
In this case, three brains may be better than one—especially since mine is questioning why I should be loyal to Jade after what she did to me.

Her head felt as if it were ready to burst into a million pieces.

In the past month, Ally had resigned herself to the fact that her life was never going to be perfect. Take friendships, for example. In her opinion, establishing them was akin to a never-ending game of Monopoly. Everyone started out in the same place, but in no time at all allegiances were formed by the real estate you found yourself on: in her case, the San Francisco neighborhood of Pacific Heights. The better the neighborhood, the more desperate the players became.

On the other hand, dating was no more nuanced than a game of checkers. The players’ swift turns zigged and zagged and hopped and skipped from a flirtatious, direct gaze, to a Mona Lisa smile, to a modest joke, to a sultry laugh. By the time all the pieces were off the board, the winners were both of them—if only for that first lust-filled night.

On the other hand, true love was a Rubik’s Cube, primarily colored by emotions like, say, attraction, passion, and commitment, which never seemed to align because they were blocked by the implacably somber hues of circumstance, timing, and serendipity.

Ally’s feelings for Brady were a perfect example. She hadn’t wanted to fall in love with him, but fate had other plans for her. And she knew he loved her, too.

But he was Jade’s husband, not hers—at least, he was perceived that way in the eyes of Bettina Connaught Cross and those of the Top Moms Committee, which supported Bettina’s every decision.

Otherwise, Jade and her adorable little boy, Oliver, would have never been allowed in the club in the first place.

Keeping Jade and Brady’s secret was one of the reasons Ally tried her hardest to keep Brady at arm’s length, despite their mutual attraction.

But now that Ally had learned that Jade had lied to her, what reason did she have to be loyal in return?

Because betraying Jade means betraying Brady, too,
she reasoned. She knew how important it had been for him to get little Oliver into the club. He even left the company he’d started and became a stay-at-home father. The club offered Oliver too many great connections.

She could easily understand his motivation. It was why she lied about her own true circumstances.

Ally glanced over at Jade. They’d been together in the park for over an hour, but except for a cursory nod, Jade had avoided Ally completely.

How ironic,
Ally thought. If it for weren’t Brady’s desire to get Oliver into PHM&T, he would have never asked Jade to come back into his life in the first place.

Thinking about Brady—about his touch, and the way he longed for her—made Ally blush. She couldn’t remember the last time she’d had sex with anyone.

As for Brady, the memory of the few searing kisses they’d exchanged were all she had to console herself.