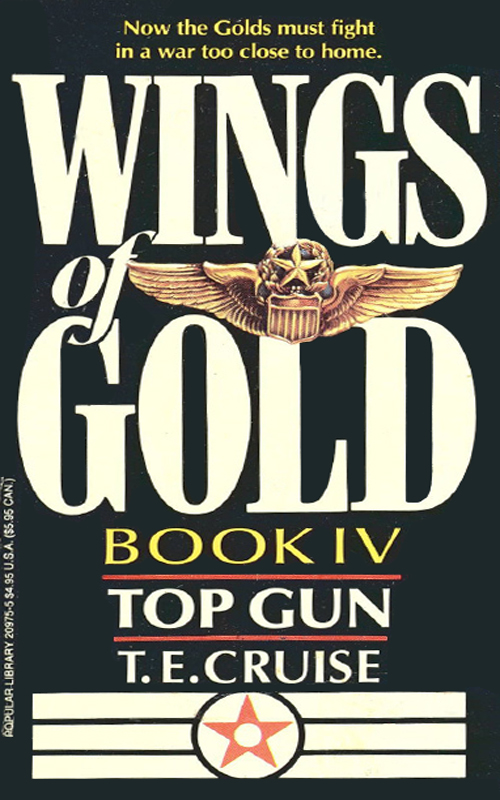 The Grueling Trials,
The Glittering Triumphs of Gold

His blood isn’t Gold. But he’s determined to leave his stamp on a proud dynasty.

He puts the company on a bold new path in the hotly competitive airline business. But he can lose it all in a shocking tragedy
that threatens a vital partnership.

She’s a sky warrior, and all woman. But she stands between two rival brothers already bitterly divided.

Whether landbound or airborne, he’s always pushing the edge, soaring in one last combat foray that will electrify the world.

He’s a better pilot than his hero brother. Now the real dogfight’s about to start.

Wings of Gold: The Aces

Wings of Gold II: The Flyboys

Popular Library books are published by

The Grueling Trials, The Glittering Triumphs of Gold

Cold War Heats Up as President Nixon and Soviets Trade

Charges of Interference
in Mideast

MAYAGUEZ
Fired Upon and Boarded by Cambodians

The executives and guests gathered at the conference center grew quiet as Don Harrison, the chairman of the board and president
of Gold Aviation and Transport, entered the plush screening room. As Harrison slipped into his gray suede armchair, he gave
the signal for the film to roll. The recessed lighting dimmed, the speakers built into the theater walls coughed and crackled.
The rough cut of the industrial film, commissioned for the upcoming stockholders’ meeting, began to roll.

Harrison watched as the screen faded to black. On the sound track there came the shrill scream of a jet engine, segueing to
a trumpets’ swell. The black screen was slashed with a diagonal beam of white light that dramatically lit the ghostly gray
needle nose of a jet fighter within a darkened hangar.

The film’s narrator, a famous actor who’d made his reputation doing biblical pictures, began his spiel:

“Since 1927, when Herman Gold sold his first airplane design to the government from out of a Santa Monica waterfront loft,
Gold Aviation and Transport has been on the cutting edge of aviation technology
…”

Spliced in was some splotched, amber-tinted footage of the single-engine, open-cockpit, G-1 Yellowjacket mail transport warming
up on the tarmac. Waving to the camera were the ground crew in overalls, and a grinning pilot bundled up in sheepskin and
a soft leather helmet. The pilot’s white silk scarf flapped in the wind as he climbed into the pilot’s seat, and then there
was a shot of the stilt-winged, duralumin Yellowjacket taking off, soaring away into that long-ago sky.

The film cut to black-and-white footage of an airport, circa the 1940s.

“
It was the GAT Monarch GC-2 and 3 series of commercial airliners that first brought safe, comfortable air travel to the public,”
the narrator continued, while the screen showed footage of nattily dressed passengers enjoying themselves within a prop-driven
GC-3’s pressurized cabin.

In rapid succession, from top to bottom, the screen was filled with drawings and specs for the GC-909, GAT’s first jetliner;
the smaller 909a, designed for short, domestic hops; and the stretched, intercontinental version, the 909i.

“And here is GAT’s latest commercial transport, the incredible GC-999 jumbo jet liner, first flown in 1970. The GC-999 can
seat 490 passengers and carry them over 7,000 miles at a cruising speed of 590 miles per hour. But GAT’s unbroken string in
the commercial transport industry is only half the company’s success story—”

The film cut back to the darkened hangar that began the promo, and several more narrow-focus overhead spotlights flared to
life. Now, in addition to that mysterious jet fighter’s needle nose, the fighter’s teardrop canopy and vertical tail were
illuminated. The tail was painted a ghostly gray except for two diagonal slashes of turquoise and scarlet: GAT’s signature
colors.

Harrison smiled as the screening room erupted in excited murmurings and applause. The idea had been his to reveal GAT’s newest
experimental fighter, the GXF-66 Stiletto, in the manner of a stripper teasingly peeling off one article of clothing at a
time. Marketing had become Harrison’s responsibility—or, more to the point, his burden—since his father-in-law, Herman Gold,
had relinquished control of GAT to him, back in 1967.

“GAT is much more than commercial avation,”
The narrator was thundering.
“For GAT has never flinched from going to war!
—”

Suddenly, Harrison and the rest of the audience were treated to a skillfully edited World War II gun-camera montage of American
fighters shooting down German and Japanese airplanes, followed by an extended, color film sequence of a USAF GAT F-90 BroadSword
jet fighter pursuing a fleeing, gunmetal-gray MiG wearing North Korean markings on its snout and tail.

“In both theaters of the Second World War, the GAT BearClaw fighter and BuzzSaw attack bomber helped our flyboys take command
of the skies, the voice-over continued. “While in Korea it was the GAT BroadSword that allowed our pilots to reign supreme
over MiG Alley
—”

On the screen, the swept-wing F-90 began to pelt the MiG with 50
MM
slugs. The 50
MM
tracers looked like orange streaks of lightning as the MiG vanished in a cloud of oily black smoke.

“Due to the BroadSword’s fabulous success over Korea. hundreds were sold to our NATO allies. Today, BroadSwords have been
supplanted by higher-performance aircraft in the service of most major powers, but BroadSword fighter squadrons still patrol
the skies on behalf of smaller air forces, and it is the BroadSword that is still the backbone of America’s own Air Defense
National Guard.”

On-screen, the BroadSword pilot wearing his helmet with lowered visor and oxygen mask saluted from within his teardrop canopy
before putting his warbird into a victory roll. As the BroadSword dropped away, the scene shifted to a contemporary, bird’s-eye
view of the sprawling Gold Aviation and Transport office headquarters and factory complex, situated on hundreds of acres in
Burbank.

“
It was here in California that the BroadSword was designed and built,”
the narrator intoned.
“Today. GAT is a vast manufacturing metropolis employing thousands of American workers who continue to turn out fighters,
bombers and transport craft for the military and international commercial aviation markets.”

The scene returned to that darkened hangar. The music built as the hangar was suddenly awash in light. The sleek GXF-66 Stiletto
jet fighter—forty-seven feet long, with a thirty-one-foot wing span—stood revealed in her extraordinary grace. She looked
like a monstrous predatory insect on her spindly tricycle landing gear, her bubble of a teardrop canopy rising up like a cyclopean
compound eye. The fighter’s engine air inlet gaped beneath her needle nose like the yawning maw of a shark. She was painted
entirely in a ghostly gray, devoid of bright color except for GAT’s trademark gaudy slashes on her tail.

“Here to tell you about the Stiletto, the latest example of GAT fighter technology, is the company’s founder, Herman Gold.”

Don Harrison Watched as up on the screen his seventy-seven-year-old father-in-law stepped out from around the tail end of
the fighter into a pool of light. The sequence had been shot a little over a year ago, just after Herman had recovered to
the best of his ability from his second heart attack. Unfortunately, Herman looked like a shell of his former self. His lined
face was drawn, his bald scalp was mottled with liver spots, and the reddish-gray fringe of hair around his ears, and his
closely trimmed beard, looked dry and listless. His shoulders were stooped and his charcoal, double-breasted suit looked too
big on him, but Herman’s voice was clear and firm, and his pale blue eyes sparkled with youthful excitement as he spoke:

“
Two years ago, when we first conceptualized the Gold Experimental Fighter, or GXF-66, we intended a multirole, air-combat,
lightweight craft. A plane that incorporated state-of-the-art fly-by-wire computer-augmented controls, but also harkened back
to the BroadSword in its dynamic simplicity. I’m here to tell you, the stockholders
—
and the world
—
that we’ve achieved our goal.”