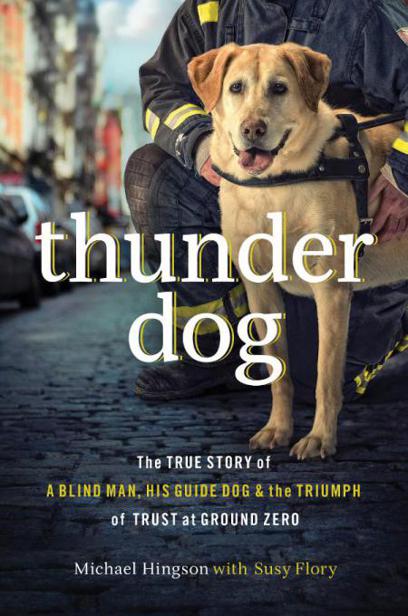 THE TRUE STORY OF
A BLIND MAN, HIS GUIDE DOG,
AND THE TRIUMPH OF
TRUST AT GROUND ZERO

Author is represented by the literary agency of MacGregor Literary.

Unless otherwise indicated, Scripture quotations are taken from THE NEW KING JAMES VERSION. © 1982 by Thomas Nelson, Inc. Used by permission. All rights reserved.

For Karen, my best friend, my world, and the rock who kept me grounded after 9/11.

For Hazel tenBroek. Hazel, I never got to meet Chick, but through you and your stories, I got to know and admire him and his teachings. For a guy who university intellectuals said could never be a law student due to blindness, he certainly went on to become one of the most respected constitutional law scholars in the U.S. And to think he put his wisdom to work founding and building the National Federation of the Blind. Thank you for sharing him with me and so many others over the past quarter century.

For Gini Monroe, my favorite cowgirl, friend, and mentor.

The Courtesy Rules for Blindness

T
he sighted can only imagine what it is like to be blind. Close your eyes for a minute or two and walk through your house. For a moment, imagine it for a lifetime. Then specifically imagine being with your trusted guide dog, Roselle, working seventy-eight floors above the ground at the World Trade Center on 9/11/2001.

Thunder Dog
is an incredible story of Michael Hingson and Roselle as they descend down those seventy-eight floors, helping dozens of others to escape a collapsing building. Down a stairway, desperate but calm at the same time. You will read of unforgettable moments, reflecting the blind experience with the emphasis on the senses rather than the visual. You will live again the tragedy and triumph of September 11.

Thunder Dog
celebrates the power of the human and animal bond. And, we all can learn life lessons from this incredible story.

I had the honor of hosting Michael on
Larry King Live
five different times, and each time, he brought his guide dog with him. Viewers relived the story over and over again and never seemed to get enough. Since then, Michael has become an international hero with appearances all over the world. He has been honored by many organizations, and in July 2010 was the keynote speaker for the National Federation of the Blind’s annual conference in Dallas.

Chapter by chapter of this intriguing work will keep you spellbound. You will relive 1,463 steps as a blind man and his dog triumph over adversity. Settle in, for you are about to read a page-turner.

I
’m sorry,” the doctor said. “He is permanently and totally blind. There is nothing we can do for him.”

George and Sarah Hingson looked at each other, devastated. Their six-month-old son, Michael, was a happy, strawberry blond baby boy, healthy and normal in every way except one. When the Hingsons switched on a light or made silly faces, Michael did not react. Ever.

Michael Hingson was born in 1950, and he was fifty-nine days early. Back then, standard medical procedure was to put a premature baby in a sealed incubator and pump in pure oxygen until the baby’s lungs matured. The practice had been in place for years and resulted in an epidemic of blindness in preterm babies born before thirty-two weeks gestation. An eye disease called
retinopathy of prematurity
(ROP), formerly called
retrolental fibro-plasia
, was to blame.

Arnall Patz, a doctor and research professor at Johns Hopkins University, discovered the cause of ROP. It turned out that extreme oxygen therapy caused blood vessels in the back of the eye to constrict. The eye, in an attempt to compensate, produced a tangled mess of blood vessels that leaked blood, scarring and subsequently destroying the retina.

Mr. and Mrs. Hingson had watched as the doctor dilated Michael’s eyes, then examined each retina with a special lighted instrument called an
indirect ophthalmoscope
to determine how far the retinal blood vessels had grown. The prognosis for ROP is indicated by the stage. A diagnosis of stage 1 or 2 means the condition is less severe and will not lead to blindness. The higher the stage, the worse the prognosis. Michael was diagnosed as stage 4, meaning almost total retinal detachment, resulting in nearly complete loss of vision. The retina functions much like film in a camera, creating an image of the visual world in layers of neurons and synapses that capture light for the brain to encode and process. No retinal function means no visual information is transmitted to the brain. Michael’s condition was irreversible.

Before Dr. Patz proved his controversial theory in clinical trials, funded by money borrowed from his brother, more than ten thousand premature babies in the United States went blind between 1941 and 1953. Michael was one of those babies. So were actor Tom Sullivan, musician Stevie Wonder, and National Federation of the Blind president Dr. Marc Maurer. So many children were blinded in the early ’50s that the average age of blind people in America dropped from seventy to sixty-five years.

“My best suggestion is that you send him to a home for the blind,” the doctor continued after examining Michael. “The specialists there will be able to take care of him.” The words took on edges and cut deep grooves of shock and grief into the Hingsons’ hearts. “He will never be able to do anything for himself because of his blindness. If you keep him at home, he will only be a burden on your family.”

Like most people, the Hingsons had never really been around a blind person before. But they were down-to-earth people who thought for themselves and made up their own minds. George, a self-taught television repairman with an eighth-grade education, and Sarah, a high school graduate with a beautician’s license, decided to ignore the doctor. They loved Michael just the same as they loved his two-year-old brother, Ellery. No matter what the experts said, they were not going to send their beloved younger son away to a strange place far from home and family. There had to be a better way. Instinctively, the Hingsons knew that sight was not the only pathway to learning.

From the beginning, Michael was treated no differently from his brother. He was encouraged, nurtured, and loved. He was expected to grow and learn like any other child. He was allowed to explore the neighborhood on his own two feet, on his bicycle, and then with a guide dog. He never went to a school for the blind or lived in a community set apart. He never felt handicapped or disabled. He knew he was different, but he decided not to let it stop him. Ultimately, through his parents’ decision to ignore the doctor’s strongly worded recommendation, Michael was given the chance to grow up and find his own way in a world not set up for someone like him.

This is the story of a man blind from birth who triumphed over adversity throughout his life. His hard-won survival skills and his feisty, can-do spirit prepared him to survive the World Trade Center attacks in a seventy-eight-story stairwell descent with his guide dog, Roselle. Michael’s blindness didn’t stop him from shocking the neighbors by riding his bicycle through the streets of Palmdale, California, as a child, and on September 11 his blindness became an asset as he survived and helped others during the worst terrorist attack ever on American soil.

Yet, there’s more. “The real story, in my mind, isn’t how I got out of the World Trade Center,” said Michael. “It’s how I got there in the first place.”

Forty-seven years after the birth of Michael Hingson, a yellow Labrador retriever puppy was born in the whelping unit of Guide Dogs for the Blind in San Rafael, California. The puppy’s name was Roselle, and she, too, was blind from birth. But sometime between her third and fourth week, she opened her eyes. On September 11, 2001, she saved Michael’s life. This is Roselle’s story too.

The Haunting of Gabriel Ashe by Poblocki, Dan
The Gunny & The Jazz Singer (Birchwood Falls #1) by Jane Leopold Quinn
Come Inside by Tara Tilly
How I Shed My Skin by Jim Grimsley
Runner Up by Leah Banicki
The Most Beautiful Book in the World by Eric-Emmanuel Schmitt
God’s Secret Agents: Queen Elizabeth's Forbidden Priests & the Hatching of the Gunpowder Plot by Hogge, Alice
Ghost Ship: A Port Chatham Mystery by P. J. Alderman
Christmas With Tiffany by Carolynn Carey
Special Forces 01 by Honor Raconteur