Read Through the Looking Glass Online

Through the Looking Glass 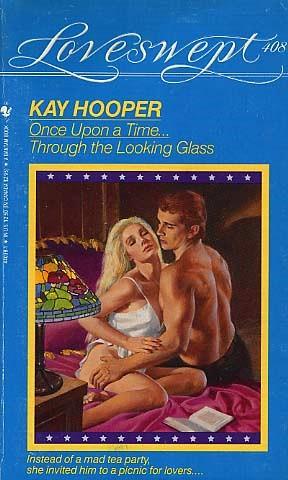 The Man In Her Mirror...
He was a financial wizard, a driven rogue with a Midas touch, but
Gideon Hughes
had no interest in keeping the run-down Wonderland carnival he'd inherited-until an enchantress with spun-silver hair presented him with a puzzle he had just had to solve!
Maggie Durant
intrigued him, unnerved him--and made him yearn to storm the fortress of her mystery. But he found it almost impossible to conduct a courtship in the midst of clowns, gypsies, and magicians, even when the angelic siren who knew his secrets announced she was in love with him! Maggie hoped it was only chemistry between them, but the brave man who'd entered her sanctuary was destiny's knight. Gideon had always played by his rules, but in Maggie's world he had to feel his way. Would she show him the real woman who'd love him forever, instead of the shimmering reflection she made in his eyes?

"Am I disturbing you, child?" The lovely feminine voice that issued from the telephone receiver held an abstracted tone, but it couldn't obscure the more resonant notes of a strong and forceful personality. Her voice had a mysterious quality that Maggie had never been able to put her finger on.

"No, Aunt Julia.
I'm alone." Aunt Julia never wanted to intrude on Maggie's personal life and never asked probing questions, but seemed to take it for granted that her infrequent calls probably interrupted athletic bouts of youthful sex.
Especially since she tended to call very late at night.

Maggie pushed herself up on an elbow and rubbed her eyes blearily before peering at her bedside clock. Par for the course: It was two A.M. "Alone?
At your age?
Really, Maggie, you—well, never
mind
. It's your own business, certainly, and with all the risks you young people have to contend with these days, I suppose you're wise to be selective."

Politely, Maggie said, "That is true. I just wish you'd get it through your head that I don't have a line of hopeful lovers waiting outside my door. I told you when I was ten that I was going to wait for Mr. Right, and I haven't changed my mind. Silly of me to be an idealist, I realize, but there it is."

"You haven't found him yet I take it?"

"Hardly.
There are a number of misters running around out there, but not one of them has been right for me. Did you call to check on the progress of my love life?"

"You know better. I'd never intrude."

Sitting up in bed, Maggie said, "Not Uncle Cyrus?"

Maggie remembered this particular cousin, though it had been years since she'd seen him. That was generally the case with her relatives. A large family and long-lived, they were spread out over the globe and rarely got together for clan gatherings.
Which was, Maggie had privately decided, all to the good.
To say that most of her relatives were peculiar was to understate the matter. They ranged from mildly eccentric to certifiably mad—though none was, to her knowledge, dangerous.

The undisputed heads of the clan were Aunt Julia and Uncle Cyrus, and both were... unusual.
Definitely unusual.
The younger generations of the family called them aunt and uncle, but the actual relationships were vague. Maggie didn't know their ages or, really, anything else concrete about them, and when in a mad moment she'd tried to research her family tree, she'd backtracked as far as the turn of the century before losing her nerve. By that point, the tree branches had been weighted down with so many colorful characters and peculiar stories that she decided she didn't want to know how it all began.

Merlin was indeed her cousin, though she wasn't sure how far removed. His name was legitimate, the gift of a romantic-minded mother, and he'd naturally ended up in a carnival. He'd done the most marvelous magic act years back; Maggie thought she must have been six when she'd first seen it. He had seemed old then.

"How old is Merlin?" she suddenly asked.

"Oh. I'm sorry. When's the wake?" Her clan wasn't noticeably Irish, they simply liked parties, and without exception every one of them hated wearing black.

"Of course.
Where?"
The last family wake had been held in New Orleans. There had been marching, Maggie remembered.
And trumpets.

Aunt Julia sighed and for the first time sounded a bit irritated. "He wanted his ashes scattered over Disneyland, but the authorities wouldn't hear of it. Cyrus tried, but he just couldn't bring them around. We've had to settle for Niagara Falls. Not as good, but he did say many times that he wanted to go over it in a barrel."

Maggie accepted that without a blink.
"Almost as good, then.
I'll arrange to be there. How did he die?"

"The police ruled it accidental, Maggie, but that's ridiculous. He was murdered." Aunt Julia stated her opinion just the way one standing in the midst of a cloudburst would state that it was raining.
Absolute authority.
There was no point arguing with her; only Uncle Cyrus had ever been known to succeed in getting her to back away from such an unequivocally stated opinion.

"Really?"
Maggie asked. "Members of our family don't generally get bumped off." Her peculiar family did have a rather impressive record of good health and few enemies.

"We don't have stupid accidents either. You've just begun your summer vacation, haven't you? After the wake, perhaps you could find Wonderland and look around a bit? We should know the truth, child.
For our own peace of mind.
And for poor Merlin, of course.
He'll hate it if he can never leave the area of that wretched well he was pushed into."

Maggie followed that reasoning only because she vaguely recalled that Cousin Merlin had believed strongly in ghosts and in the conviction that an unresolved or violent death chained a helpless spirit to the spot of his or her untimely demise. She wasn't particularly surprised by her aunt's request; over the past ten years, Maggie had become something of a troubleshooter on family problems. Apparently, a possibly murdered cousin fell into that category.

"All right, Aunt Julia. You can fill me in when I get there. Ill
get
a flight tomorrow if I can."

"Wonderful, child.
We'll see you then."

Julia hung up the phone and sat gazing somewhat thoughtfully across the big old desk. "This time, you've surprised me, Cyrus," she said. "To send that delicate child into such a potentially dangerous situation alone—"

He chuckled softly. "Delicate? In appearance, certainly, but Maggie is no frail flower, sweet. She has an astonishingly good mind—particularly considering her upbringing. Of all our descendants she has inherited the highest degree of tolerance, the best-developed sense of the absurd, and the most childlike spirit. Combined with her sheer intelligence, those traits make her a rather formidable young woman. I'm not at all surprised she has yet to find a man to match her."

"And so?"
Julia prompted.

"I've found one for her," Cyrus finished simply.

"You'll send him to Wonderland?"

Cyrus's vivid dark eyes shone with the radiant intelligence that only Julia saw unshuttered. "Like Alice, he must fall down the rabbit hole. If he is to see Maggie clearly, he must see all that she is."

After a moment Julia smiled faintly.
"Daunting for him, poor man."

"He will survive." Cyrus chuckled again richly. "He may even prevail."

"Perhaps.
We will certainly be ready to do so. At the very least we'll keep a close watch, as usual."

Julia nodded and smiled wryly. "I suppose you know what you're doing."

It didn't strike Maggie as at all peculiar to find that the owner of the Wonderland carnival bore the improbable name of Balthasar Bundy; she knew of odder names, principally among her own family.

Her own given name had been strictly confined to her birth certificate, since she refused to use it; her understanding father had suggested "Maggie" as a reasonable compromise on her fifth birthday.

It didn't strike her as strange either that Balthasar instantly welcomed her into his troupe of carnies; she'd taken care both to dress and act suitably, after all, and her claims as an animal trainer would have been proven valid if he'd given her a chance to demonstrate.

What struck her as somewhat bizarre was Balthasar's immediate and cheerful request that she "mind the store" while he journeyed off to Africa in search of a rhinoceros.

"But why me?" she asked curiously as he bustled about his rather exotic caravan throwing colorful clothing into a battered suitcase. She had silently debated and discarded a question about the realistic possibilities of not only locating and capturing a rhinoceros, but then sneaking it off African soil and onto American soil in violation of a number of laws. To her experienced gaze, he bore all the signs of a man who would consider such a question totally pointless.

Balthasar gave her a comical look of surprise. "Well, my dear, no one else here could do it."

Maggie had too much experience with amiable lunatics to question this one further. And since she had several good reasons to believe he'd had nothing to do with Cousin Merlin's unfortunate "accident," she didn't try to prevent him from leaving. She merely asked a half dozen or so sensible questions and stood pointedly in his way until he answered them, then accepted the key to the money box—which was currently housed in the floor of the boa constrictor's cage—and promised to make herself at home in his caravan until he returned.

Then she waved good-bye from the doorway of said caravan as he rode off into the sunset in a battered 1958 black Caddie.

A muffled thump behind her made her jump. She turned to stare at the bed. It had come down from the wall, which it was supposed to do only after being unfastened. Balthasar had warned her in passing that the catch was defective. She gazed at the plush red velvet spread and gold-tasseled pillows,
then
allowed her pained eyes to take in the remainder of the caravan. Not that there was a great deal of space left once the bed came down.

There was a worn path in the faded carpet around the foot of the bed, which indicated that Balthasar habitually made certain he wasn't walking under the bed when it decided to drop. There was an emerald velvet love seat wedged in near the door with a scarred wooden table and oil lamp beside it. There was a wardrobe, which Balthasar had emptied, leaning a bit drunkenly on two shortened legs beside the narrow trapdoor that allowed access to the driver's seat of the wagon. And taking up the remaining floor space was a gleaming old rolltop desk, its every pigeonhole stuffed beyond capacity with yellowed papers.

Maggie heard herself sigh, which wasn't exactly surprising. She turned again and looked out on what was, she thought, a cross between a gypsy camp, a moth-eaten circus, and a lunatic asylum on wheels.

"Interesting place to spend a vacation," she murmured, and ventured forth to meet the inmates.

The scary part was that she felt right at home.

Curtsy while you're thinking what to say.

It's a Sin to Kill by Keene, Day
The Matchmaker by Stella Gibbons
The Missing by Tim Gautreaux
The Dragon in the Driveway by Kate Klimo, John Shroades
Fabulous Five 028 - Breaking Up by Betsy Haynes
In Plain Sight by Fern Michaels
Good Omens by Neil Gaiman
Into the River Lands (Darkness After Series Book 2) by Williams, Scott B.
Best of the Best Lesbian Erotica by Tristan Taormino
El roble y el carnero by Michael Moorcock