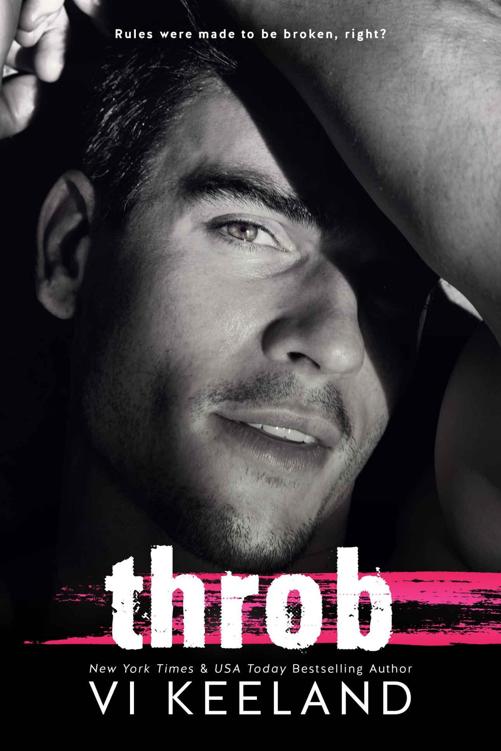 This book is a work of fiction. All names, characters, locations and incidents are products of the author’s imagination. Any resemblance to actual persons, things, living or dead, locales or events is entirely coincidental.

whose voice somehow always finds a way into my books.

1. to play a contest of chance for money

2. manipulate, typically in a way that is unfair or unscrupulous.

1. a physical or mental activity or contest that has rules and that people do for pleasure

1. to beat with increased force or rapidity, as the heart under the influence of emotion or excitement; palpitate.

I turn. He’s down on one knee, a black velvet box perched in the center of his hand. My heart starts to pound wildly in my chest … or is it more of a
throb?

… And just like that, the game is finally over.

My phone buzzes on my desk for the third time in an hour. Looking down, my eyes narrow finding the same name flashing from the display again. I frown, but slide my finger across the screen to answer this time. She skips the formalities, jumping right in to what she wants. “Come downstairs to the studio at lunch.”

“I’ll give you a delicious dessert when you’re done,” Tatiana purrs through the phone.

“Thanks, maybe next time,” I lie again. There will be no next time. I regret not learning from my father’s mistakes sooner—his no mingling business with pleasure policy was a lesson he learned the hard way.

“This is the third time you’re blowing me off. Do you know how many men would kill to spend time with me?”

“Many, I’m sure. Listen, Miles just walked in … I have to run.” My little brother hesitantly smiles and waves. I hold up one finger, ignoring whatever Tatiana is still rambling on about. His visit is unexpected, but I’m grateful for the excuse to get off the phone.

Miles nods and walks to the mahogany table displaying liquor bottles and ornate crystal glasses, the same one we’d watched our father walk to so many times before. He pours himself a tall glass of golden liquid and tosses half of it back in one gulp as he looks out at the view of Los Angeles. There’s strain in his face. I’m not surprised; the only time he comes by is when he needs to ask for something.

I rush Tatiana off the phone and, just as I push end, Helen beeps in from the intercom. “You have Stephen Blake on line one.”

“Just give me one more minute, Miles.”

My brother’s glass is drained by the time I’m wrapping up my short conversation with Stephen. His brown eyes are worn and tired, there’s a tenseness set in his jaw. Whatever he needs is big this time.

“Ben and I are putting a lot on the line with this project. We want him, but not for forty percent more. Ten is the highest we can go. You’re the super agent—sell him on the backend percentage we’re offering.” I know what’s coming next before the words sound through the receiver. “Sure, dinner next week sounds good. No, tell Miriam not to bring a friend.” A pause and then, “Thanks, Stephen, I look forward to it.”

Hanging up the call, I turn to Miles. “To what do I owe this pleasure, little brother?” I have a good hunch why he’s visiting, but I’ll play the game anyway.

My brother avoids the question, preferring to ease into the real subject he came to discuss. “Miriam still trying to fix you up?”

I pour myself a drink from a crystal decanter and raise the bottle, silently offering Miles a refill, which he happily accepts. “She swears Dad told her that she had to make sure I married well.” I sip from the glass. “There’ll be a woman there when I see them next week, even though I just told Stephen no.” We exchange a rare true smile. Stephen was our father’s best friend, and is one of Hollywood’s most coveted agents.

“Maybe Miriam’s got the right idea. You’re getting old. Time to stop fucking half of Hollywood and settle down.”

“It is by Hollywood standards. Plus, you practically live in this place lately.” He looks around my office. “You’re starting to turn into
Dad.
”

Miles says
turning into Dad
like it’s a bad thing. We grew up in the same house, becoming anything like our father is a compliment to me, yet my brother utters it like it’s an insult. A change of subject, to one that moves us to the point of his visit, is in order.

“How are things going at Mile High?” I ask cautiously, knowing it could be a very sore topic of discussion. A year after our father’s death, my brother and I split our family’s legendary film production business. I chose to continue on our father’s path, the one that had made Montgomery Productions a name every A-list actor and director wanted to work with. Miles, on the other hand, decided it was time for a change. Diving into the risky world of reality TV, he filmed his first series,
Stripped.
To this day, he can’t comprehend why
Stripped
—a show following a collection of artificially enhanced large-breasted strippers—flopped. Unable to accept the failure, he spent the last five years trying to prove he could make it as the King of Reality TV. In the process, he nearly depleted his trust fund, watched two of his “sure thing” reality shows fail, and got dumped publicly by the twenty-year-old starlet he’d just bought a Porsche.

Our strained relationship seemed to worsen as Montgomery Productions flourished over the last few years. My success fueled the grudge my brother has always harbored against me.

“Things are going great,” he says. “Really great. We just started production on a show that’s going to be huge. A ratings blockbuster, I know it.”

I’ve heard those words from my brother’s mouth on one too many occasions to believe him, although deep down I still hold hope that one-day he’ll succeed. “That’s great. What’s the show about?”

“It’s part
Survivor,
part
Bachelor.
” Miles’s eyes light up. “
Throb.
Even the name of the show is marketing genius.” He truly is passionate about his work. His lack of success has little to do with his own determination. It’s the reason I always had difficulty saying no to him, even though I knew whatever I was asked to invest in was not a smart business move.

“Twenty bikini babes on a deserted island. One good-looking single guy, who also happens to be an up-and-coming rock star, and lots of physical competition for dream dates. Mud fights and all. Even have one of the contestants on my payroll, a ringer—she’s playing the game for me—not for the bachelor. The advertisers are going to eat it up.”

I have to work hard not to let my face show my true thoughts. It used to be if you were sixteen and got pregnant you would get in trouble. Now you get your very own reality show. “Interesting. When does it shoot?”

“We already have the first few weeks in the can. Twelve girls were eliminated and now we’re down to eight. The last four are going to be shot live over two weeks in the Caribbean.”

“I haven’t seen any advertisements for it. When does it premiere?” I’m hoping, for Miles’s sake, that it’s at least six months away.

“Three weeks?” I try, really, I do, but the alarm is evident in my voice. A brand new show with zero advertising, and every other station touting a different reality show? It’s almost certain to fail.

“Yeah.” Miles’s confidence falters for a fraction of a second, but I catch it. “Listen, Coop.” He swallows hard and takes in a deep breath before continuing. “I’m not going to lie. I need some help. I just negotiated a great deal for ten solid days of prime-time advertising, but I’m running a little short on cash.”

“How short?” I respond curtly, knowing my brother is padding the magnitude of the mess he’s in.

“Miles,” I sigh and drag my hands through my hair.

“It’s a really good show, Coop. I just know the ratings will go through the roof with a little advertising.”

I’ve heard all this before. It’ll take more than Miles’s biased and unreliable assurance to convince me. “Send me some dailies. I want a look before I can answer.”

“You got it.” He smiles, tossing back the rest of the liquor in his glass. “I’ll have Linda send you over the first few episodes. You’re going to be dying to get in on this one.”

Dying,
I think to myself, might be preferable to having to watch more reality TV.