Read There Goes the Groom Online

There Goes the Groom 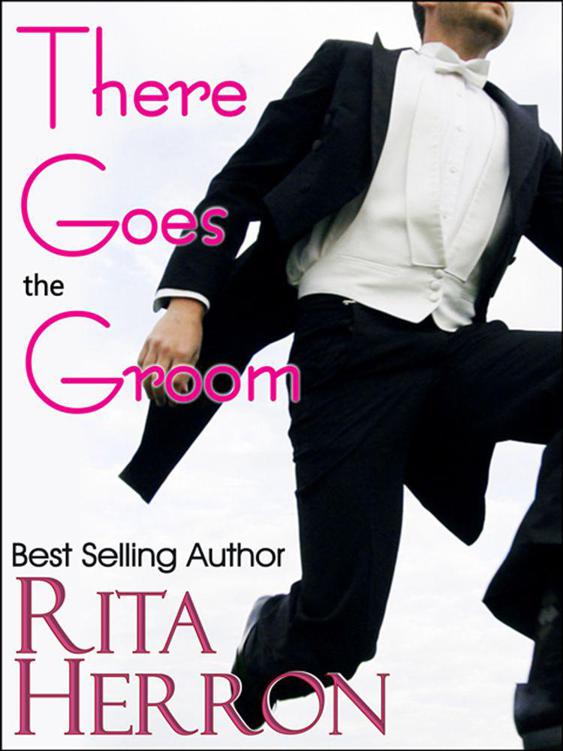 This is a work of fiction. All of the characters, organizations, and events portrayed in this novel are either products of the author's imagination or are used fictitiously.

No part of this book may be reproduced in any form or by any electronic or mechanical means including information storage and retrieval systems, without permission in writing from the author. The only exception is by a reviewer, who may quote short excerpts in a review.

There Goes the Groom

Other Books by Rita Herron

Marci Turner had always been a screw-up.

Today she was marrying Paul Pendergrass of
the
Pendergrass family of Charleston, South Carolina, and she was going to become a respectable woman.

Well…maybe she’d keep a mini-skirt or two in her closet. After all, a girl had to show off her assets to keep her husband happy. And she
did
have good legs, even if she did say so herself.

Something her sweet but boring sister Kim neglected to accentuate.

Not that it had kept Kim from finding true love. Except truth be known, she might never have found her hunky husband if
she
hadn’t convinced Kim to pull a twin switch one weekend and pretend to be engaged to Austin McDane.

Marci fluffed the tendrils of wild red hair falling around her cheeks with a grin, then applied the ruby red lipstick that matched the red roses in her bouquet -- and the see-through teddy she had packed for her honeymoon.  Not that she would need lingerie but it was always fun to take it off…

Kim might poo-poo her stark red lips, but her fiancé hadn’t complained when she’d planted those red lips on his mouth.

Or around his …length.

For a second she wondered if Kimmie and her husband had wild monkey sex, but then again, her sister had never been very daring.

Still, Kimmie had a great husband.

Even though he could be a little too focused on business.

Although they obviously had found their way around the bedroom since Kim was eight months pregnant.

Austin’s devotion to Kim had sparked her own desire to have a man look at her with those gooey eyes and fall at her feet and promise to love her for all eternity.

Tears blurred her vision. Good gracious, she had never been the sappy twin. That was Kimberly.

She was the spontaneous, fun-loving one.

But Kimberly’s nuptials had done something to her. Made her take a long look at her days of one-night flings and waking up next to a guy who had looked hot as all-get-out the night before, but who looked like a two-bagger in the morning.

And Paul Pendergrass was easy on the eyes.

He had totally swept her off her feet with his lavish gifts and attention.

Even better, he was the first male she’d ever met who understood a girl’s need for retail therapy.

Kim poked her head into the bridal dressing room at the country club, her elegant black dress molding to her pregnant figure. “How’s it going, sis?”

Marci nodded. “Can you help me with those pearl buttons in the back?”

“Sure.” Kim stepped up behind her and began the laborious task of fastening all twenty-five of the little jeweled buttons that started midway down her back and went to her butt.  “You look beautiful, Marci.”

“I bet you were surprised I picked this dress,” Marci said. Hell, she’d been surprised at herself. She had first wanted the short mid-thigh sundress with the bold fuchsia sash, but had decided if she was going to be respectable, she should start on her wedding day with a respectable dress.

After all Paul had insisted on a country club wedding with champagne and a sit-down dinner and dancing instead of the barefoot ceremony on the beach she had suggested. He wanted the best for his baby, he’d told her.

How could she to argue with that?

Kim finally finished with the buttons, then spun her around for a wardrobe inspection. “You look perfect, Marci.” Kim’s voice cracked with emotion. “Are you sure he’s the one?”

Marci frowned. “Of course I am.” Wasn’t she?

Suddenly she started to itch, and she cursed a blue streak. “Dammit, Kim, now you got me rattled I’m going to break out in hives.”

“I’m sorry, I didn’t mean it like that.” Kim squeezed her hands.

A seed of worry sprouted in Marci’s stomach. “Don’t you like Paul?”

Kim shifted on the toes of her heels. “I …uh… just want you to be happy, that’s all.”

“Paul is a wonderful man,” Marci said. “I realize you don’t know him very well, but you didn’t know Austin that well when you fell in love. And you should see Paul at the restaurant. He’s so sweet to all the little blue-haired ladies that come in. They just adore him. And when I finish my cosmetology classes, they’re all going to be my customers.”

Voices echoed outside the room, the guests arriving, the harpist starting to play.  Marci’s heart tripped into double-time.

“Of course, you’re right.” Kim poked her head through the door, then turned back to her and adjusted her veil. “It’s almost time.”

Kim’s gaze met hers, a tense heartbeat passing between them. Their parents had divorced when they were little, and they hadn’t seen their father since. Their bohemian mother had remarried a couple of times but none of the marriages took.

Marci fidgeted. Was
she
really going to tie herself down to one man for the rest of her life? Or was she like her mother?

“I’m sorry, Marci,” Kim said softly. “Mom sent a text that she couldn’t make it.”Marci blinked back tears of disappointment. For some stupid reason, she’d imagined her mother
and
father showing up on her special day.

No tears, Marci. Your parents are not going to ruin your big day.

She fluffed her veil.

Yes. Her wedding was going to be perfect -- it would be a day she’d remember the rest of her life.

Detective Cade Muller was going to nail Paul Pendergrass and his sweet little bride-to-be to the wall today.

And nothing was going to stop him.

No, sirree, the con man had escaped arrest before. Had assumed an alias more than once.  And he’d cheated hundreds of people in his various scams.

He wouldn’t get away this time. Cade had been hunting him for months and today was the big pay-off.

He smoothed his suit jacket over his service revolver and stepped inside the country club ballroom, scanning the room for trouble. For any signs that Pendergrass had been tipped off that he was onto him.

Yards and yards of that lacy tulle stuff draped chairs and white linen tables that had been erected on the opposite side of the room for the man’s wedding reception. An aisle decorated with rose petals led to an altar made of more roses and satin. Bows and ribbons dangled from the ceiling like strings of pearls, crystal vases filled with fresh flowers adorned the tables, and an ice statue in the shape of a swan welcomed guests. As if that wasn’t ornate enough, a chocolate fountain offered extra desserts in addition to the gigantic wedding cake, and the catering staff was working to set up the bar.

He gave the set-up a once-over. Hmm, the good stuff. Name brand scotch and bourbon, expensive wine and champagne.

In fact, everything looked lavish and pricey as if Pendergrass was expecting the social elite of Atlanta to attend.

By the door, tiny little bottles of  champagne-shaped bubbles filled a white basket for the bride and groom’s send-off.

A shame it would all go to waste because the only send-off was going to be in his squad car.

Did the guests know the drinks and food they would be consuming had been paid for with stolen money?

He glanced across the room at his partner, Georgia Strait. She tapped her earphone to make sure it was working. “Operation is on.”

He gave a clipped nod.

At first Georgia had protested arresting Pendergrass at his wedding, but Cade had assured her the timing would be perfect. With so many witnesses around, the man would hardly put up a fight. After all, he’d never been a violent man, and as far as Cade knew, didn’t carry a weapon.

Except for the charm he wielded on unsuspecting women when he weaseled them out of their life’s savings.

Another reason this country club wedding was the ideal place to expose Pendergrass. His victims needed to see what kind of underhanded man he really was.

No sense letting all that good booze and food go to waste either.

Once he had the man in handcuffs, the guests could commiserate their losses together while eating Pendergrass’s filet mignon and drinking his Dom Perignon.

Guests began to fill the seats, low murmurs and laughter echoing through the ballroom. Several rows of white-haired ladies tittered as they brushed past him, reminding him of his sweet little grandmother Nana Muller who’d raised him after his parents had kicked the bucket.

“Look, isn’t it beautiful?” one of the women whispered in awe.

“A Cinderella wedding for a romantic couple,” another lady commented.

Cade bit his tongue to keep from dampening their excitement with a sarcastic remark. He couldn’t tip his hand or one of the poor fools might warn Pendergrass and he’d run.

A side door at the front of the room opened, and three men entered. One he assumed was the reverend or whoever the couple had chosen to marry them – probably a con artist as well. The second man Cade recognized as Vinny Baretti, the man who’d played the real estate broker in the phony deals Pendergrass had been making and probably earned a hefty chunk for his service.

All to disguise the slime beneath.

He wore his tux and smile like he belonged in this elite crowd.

Pendergrass had grown up on the streets, had lied and cheated his way into the world he wanted as his own, and fooled countless people along the way, stealing their fortunes to build his own private empire.

The crooked three-man team took their places, the piano music replaced the harp, and the guests shifted to watch the center aisle. A striking redhead in a black satin dress started down the aisle holding a bouquet of white roses.

He’d done his homework. She ran a children’s center for needy kids and was married to a promising architect named Austin McDane. Judging from her rounded belly, she was obviously very pregnant pregnant.

At this point, he didn’t think she and her husband were involved in Pendergrass’s scheme, but the other twin – Marci—she was in it up to her pretty little eyeballs.

Kim smiled at her husband as she made it to the altar, but she turned to watch the door for her sister. Hmmm. She looked more worried than happy.

Questions ticked through his head. What did she think about her sister’s choice in husbands? Did she know about Pendergrass’s illegal activities?

The music shifted as  the bridal march began, and hushed whispers of excitement floated through the room as everyone stood for the bride’s entrance.

Cade glanced at Pendergrass and noted that he was beaming as if he was totally smitten with his fiancé. Hell, maybe he was.

Maybe they were soul mates. Criminals born of the same mind.

But they wouldn’t be celebrating their honeymoon in Tahiti like they thought or making love in the moonlight and running naked on the beach.

The Wolf Sacrifice by Rosa Steel
Spark by Aliyah Burke
The Mane Attraction by Shelly Laurenston
Heartsick by Chelsea Cain
Olivia by Dorothy Strachey
Frontline by Alexandra Richland
Blood on the Strand by Susanna Gregory
The Wicked North (Hearts Touched By Fire Book 1) by Gina Danna
Take Me by Stark, Alice
The Unburied Dead by Douglas Lindsay