Read Then There Was You Online

Then There Was You 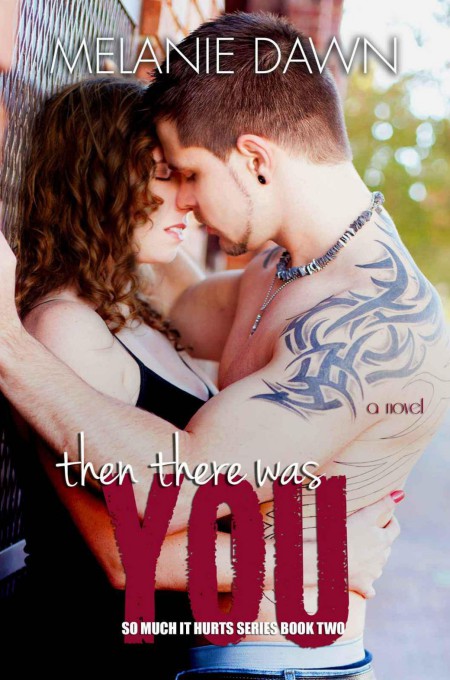 Then There Was You

Cover Design by B Design

Permission for use of song lyrics for
Elephantes
,
Then There Was You
, and
Reasons
was obtained by Charlie McIver.

Permission for use of song lyrics for Thank You was obtained by Damon Hamby.

All rights reserved. Except as permitted under the U.S. Copyright Act of 1976, no part of this publication may be reproduced, distributed or transmitted in any form or by any means, stored in a database or retrieval system, without the prior written permission of the author or publisher.

This book is a work of fiction. Any references to historical events, real people, or real locales are used fictitiously. Other names, characters, places, or incidents are a product of the author’s imagination. Any resemblance to the actual events, locales, and persons, living or dead, is entirely coincidental.

The author acknowledges the trademarked status and trademark owners of various products referenced in this work of fiction, which have been used without permission. The publication/use of these trademarks is no authorized, associated with, or sponsored by the trademark owner.

Warning:
This book is intended for readers 18+ due to some explicit language and mature themes.

“No!” I screamed as I slammed my fist into the side of the metal phone booth. “It can’t be true!” My knuckle immediately throbbed, but it was nothing compared to the pain in my heart. Falling to my knees, I cried out in agony, “Oh god, this isn’t happening!”
This isn’t fucking happening!
Blind rage took over my body, and I punched the floor relentlessly. Searing pain exploded in my fist, but that didn’t stop me.

Within seconds a guard had me in shackles, lifting me to my feet. He escorted me down the hall, while I writhed and howled like a caged animal, directly past my own bunk and straight into segregation. He shoved me into the tiny cell and locked the door behind me. I slammed myself against the wall.
Please let this be a nightmare!
My shoulder ached with pain, but I didn’t give a fuck.

Officer Blevins abruptly slid open the tiny window in the metal door. “Chris? You’ve got to calm down. Talk to me, man. What happened?”

I glanced toward his caring, steel-gray eyes, the only things I could see through that tiny fucking window, but I didn’t answer. How could I? The weight on my chest was almost too much to bear.

A sob escaped my throat, but I quickly tried to reel it in. I groaned, slamming my fist into the wall to redirect my emotions. I wanted to break the concrete blocks into a million pieces, just the way my shattered heart felt, so I kept pounding it over and over. I needed to give meaning to the pain I felt inside—a real reason to cry. The throb of my knuckles almost alleviated the agony in my heart.
Almost.

“Chris, if you don’t calm down, I’ll be forced to call medical.”

Officer Blevins stared quietly at me for a moment, hoping I’d calm down on my own. I glared back at him, chest heaving and jaw twitching, until he slid the window closed and disappeared.

I don’t really know what happened after that. Everything was just a blur. All I knew was that I completely fucking lost it. I couldn’t stop myself. I was flipping the hell out and had no control over my body or my actions. Blood was splattered on the tile floor. My knuckles were a fucking mess, and my shoulders hurt from ramming them into the wall.
Why the hell can’t there be punching bags in these cells?
I needed to pound the shit out of something.

I leaned on the wall, throwing my head back against the cinder blocks and closing my eyes
. I can’t believe this. I can’t fucking believe this!

I could feel the roar in my throat as I tried to push back the sobs that threatened to escape. With a growl, I pounded my fists backwards against the wall behind me.

Just then, as if the heavens opened up and sent me an angel, I heard the quiet voice that had been a balm to my pain for the past few months.

Jeremy, my best friend and drummer, didn’t question my most recent alcohol binge. He just accepted it, knowing alcohol was the only thing that would numb my pain. He remembered my heartbreaking history with Kaitlyn, recalling how broken I was several years ago during the weeks following our brief reunion at the beach. So a few days ago, when I ran out of the grocery store empty-handed, Jeremy knew something serious had happened.

I collapsed onto the seat of the tour bus in despair, burying my head in my hands.

He stopped dead in his tracks. “Oh shit. You saw her, didn’t you?”

I nodded, barely able to contain myself. And that kid… oh god, that kid…

Tossing the most recent tabloids down onto the seat next to me, he grumbled, “I knew coming here was a bad fucking idea.”

I didn’t respond. I couldn’t. I just sat there, agonizing over my most recent encounter with the only woman I’d ever loved while Jeremy stood over me, unsure of how he should respond. After several excruciating seconds, he sighed and patted me once on the shoulder. “Sorry, man,” he mumbled, and then trudged to the back of the bus, leaving me alone with my thoughts while we headed down the road toward Charlotte for our next concert.

I sensed that Jeremy somewhat grasped the depth of my feelings for Kaitlyn, but I knew he would never fathom the pain I’d have to endure in letting her go. So I sat alone on the bus, writing her that painful goodbye letter before making the fateful call to Beverly that would ultimately seal the deal.

Later that night, when we’d reached the Queen City, we sat at the bar in the Ritz-Carlton while Jeremy handed me a shot of tequila. I threw it back and asked for another one in an effort to take the edge off.

“That’s it,” he encouraged me. “Drink her memory away.”

So, I tried. Round after round, I tried to erase the tormenting thoughts of seeing her so happy with her family.

And day after day, since then, I hadn’t stopped trying. Every radio interview, every television appearance, and every other bullshit marketing ploy that Beverly had planned for us that week in the QC was excruciating. So when the morning of the Charlotte concert finally arrived, it was all I could do to drag myself out of bed.

Black River by G. M. Ford
The Man From Taured by Alaspa, Bryan W.
The Better Part of Valor by Tanya Huff
Death on a Short Leash by Gwendolyn Southin
The Space Guardian by Max Daniels
Disclosure: A Novel by Michael Crichton
Death of the Mad Hatter by Sarah Pepper
Hocking, Amanda Letters To Elise (My Blood Approves 4.5) by Danni Blackmun
GRUDGE MATCH (Love Challenge) by Bouvier, Pamela
Love For Lenore by Regina Tittel