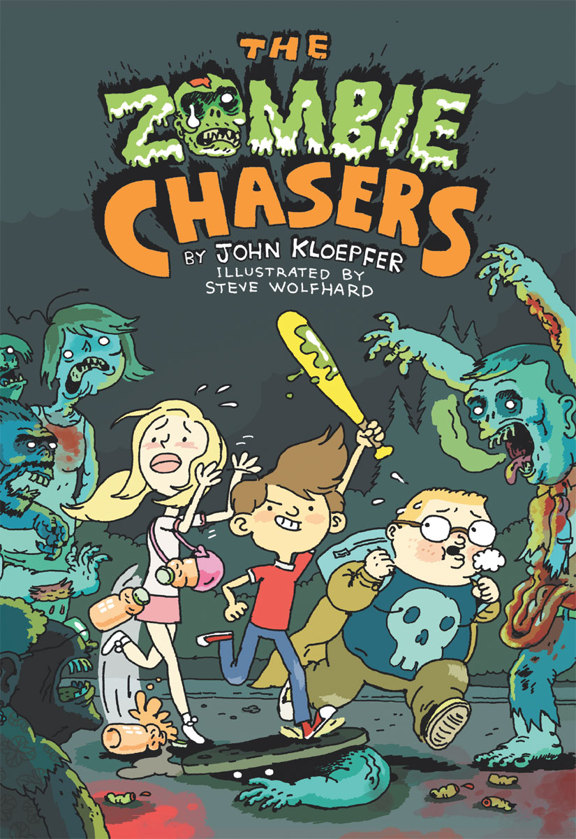 The Zombie Chasers
By John Kloepfer

To my mom and dad for their love and patience—S. W.

Dusk settled over the neighborhood. The humid air was thick…

Zack should have been a better hostage.

In the Clarke family kitchen, Madison Miller was sitting in…

Madison slammed the bedroom door behind them. Zack’s forearms tightened…

Madison whirled around and watched in horror as her beloved…

Twinkles cocked his head in confusion. “I guess it’s just…

Rice’s house was dark and empty except for the bluish…

Madison swerved, dodging the crash. She straightened the wheel as…

Moonlight shimmered in through the glass storefront, sparkling off the…

Zack, Rice, and Madison listened to the hammering of their…

She hoisted Rice to his feet by his shoulder strap,…

The Volvo made a right onto Locust Lane, and they…

The Volvo crunched onward over the gritty unpaved road, spraying…

After a quick debate, which Madison won by decree, it…

Madison stepped around the corner of the towering stone vault,…

Zack jumped down and stepped on the defeated zombie’s chest.

“We’re not taking any chances.” Rice said. “Time to tape…

The Next Zombie Chasers Novel, Undead Ahead

About the Author and the Illustrator

D
usk settled over the neighborhood. The humid air was thick as pulp.

Zack Clarke turned onto Locust Lane after a slow walk home, expecting the usual Friday night action on his block: the Zimmer twins grinding out tricks on their skateboards across the parkway; Mrs. Mansfield coming home from the video store with bags of fast food and DVDs for her lazy children; or Old Man Stratton prowling the sidewalks, a disintegrating paperback clutched in his veiny hand. But on this muggy Arizona evening, there wasn’t a soul to be seen.

Hunched down under the weight of his backpack,
Zack quickened his pace, eager to get home. Earlier in the day, a food fight had landed him in after-school work detention, polishing his middle school’s linoleum floors. Now all Zack wanted was the one leftover slice of chocolate birthday cake waiting in the refrigerator, wrapped in plastic and tagged with a Post-it:
ZACK’S B-DAY CAKE, DO NOT TOUCH!

Zack could see his house now, his mom’s Volvo station wagon sitting in the driveway. Every light in the house was off—all except the one in his sister’s bedroom above the garage. He watched from the sidewalk
as Zoe’s room went dark, leaving the house looking empty and deserted.

But Zack knew that his older sister, Zoe, and her evil trio of eighth-grade she-devils—Madison Miller, Ryan York, and Samantha Donovan—were having one of their notorious sleepovers at his house. So until Mom and Dad returned from parent-teacher night at his school, it would just be him. And them.

As he reached the stoop, a street lamp flickered and went dead, casting the entire lawn in shadow. He pushed the front door open slowly. “Hello!” he called out into the darkness. “Zoe?”

Suddenly, the door slammed shut, and he felt a paper bag crinkle down over his head. A voice shouted, “Gotcha!”

In an instant, four pairs of hands grabbed Zack by his elbows and ankles, hoisted him off the ground, and began to carry him through the foyer. Caught in their monster-tight grip, Zack squirmed uselessly, unable to twist free.

His captors plopped him down hard on an old
wooden desk chair, the bag still over his head. Someone was holding his wrists behind the chair, bending his arms back as if he were a handcuffed prisoner. He writhed and kicked, trying to buck loose. Frustrated and exhausted, Zack went limp, playing possum for a second, before thrashing wildly in one final burst of energy.

That’s when he heard a digital beep, and someone lifted the bag off his head. His sister, Zoe, stood before him. Directly behind her, their father’s laptop sat open on the coffee table, and Zack could see himself on the computer screen.

“Zoe, what are you doing? You know Dad doesn’t let us play with the webcam.”

“I’m not playing, little brother,” she said, flipping her dark hair back and cocking her head all too glamorously, like America’s Next Top Psycho preparing for her closeup. “I’m producing a new reality show for VH1. It’s called
Hostage Makeover
. You want to be in it?” A sinister grin stretched across her face.

“I’d rather die in my own vomit,” Zack answered.

Samantha and Ryan entered the living room and shimmied behind Zack. Ryan held a giant roll of duct tape in one hand, and when Zack turned around, she tucked it behind her back. “No peeking, young Zachariah!” she chided, patting him on the head.

“Okay, Zacky, you hold still!” Zoe gestured to her two minions. A second later, Ryan and Samantha were circling Zack, taping his upper arms and shoulders firmly to the back of the chair, quickly moving on to his legs until they were sure he couldn’t escape. The
mysterious pair of hands behind him finally unclasped his wrists. Zack felt the blood rush, throbbing in his fingertips.

Again, he tried to wriggle free, but the tape was too strong.

Zoe adjusted the webcam to capture her brother’s struggle. Then she crouched down in front of the computer and spoke: “Welcome to the premiere of
Hostage Makeover
. I am your host, Zoe Clarke. You’ve already met our captive, my unfortunate-looking younger brother, Zachary Arbutus Clarke.” She stepped away from the laptop. “Tell us how you’re feeling, Hostage Boy.”

“
Zoe, seriously, lay off,
” a voice mimicked him.

Madison Miller emerged from behind the chair, holding a polka-dotted makeup case. Madison was the prettiest girl in school, with long, almost blond, light brown hair, and just a few faint freckles dotting her button nose. She was also one of the tallest girls in the eighth grade, and she towered over Zack, gazing down at him with her big blue eyes.

“Shut up, Madison. No one’s talking to you.”

“
Shut up, Madison. No one’s talking to you,
” Madison continued in her baby voice.

“I’m an idiot,” Zack said, trying to outsmart her.

Madison opened up the makeup case and pulled out what looked like colored pencils. Then she took a sip of her favorite drink, kiwi-strawberry Vital VeganPowerPunch.

“You know, Madison,” Zack said. “I heard something, that if you drink too much of
that stuff it can, like, mess with your whole biological makeup.”

“Did someone say ‘makeup’?” Zoe chirped.

With that, Madison pulled out a frightening array of cosmetics and placed them on the coffee table. Zack had no idea what all this stuff was used for, other than cluttering up Zoe’s bathroom.

“Listen up, little bro.” Zoe formed a little rectangle with her index fingers and thumbs and peered through it like some kind of Hollywood director. “If you play nice, we’re gonna make you look really, really pretty. But if you disturb me while I’m filming, we will make you look silly, then I will lock you in your room, put this video on YouTube, and email the link to everyone at school. Now be a good hostage.”

“Zoe, let me go or I’ll tell Mom and Dad that you’ve been sneaking out of the house at night,” Zack blurted in desperation.

She hit the space bar and yelled, “Action!”

Bodyguard Under the Mistletoe by Cassie Miles
A Sea of Purple Ink by Rebekah Shafer
Love Lost and Found by Michele de Winton
This Was the Old Chief's Country by Doris Lessing
The Soldier's Lady by Michael Phillips
Holding The Line by Wood, Andrew
Vegan for Life by Jack Norris, Virginia Messina
Apricot Kisses by Winter, Claudia
Smoke and Mirrors by Ella Skye
The Body in the Lighthouse by Katherine Hall Page