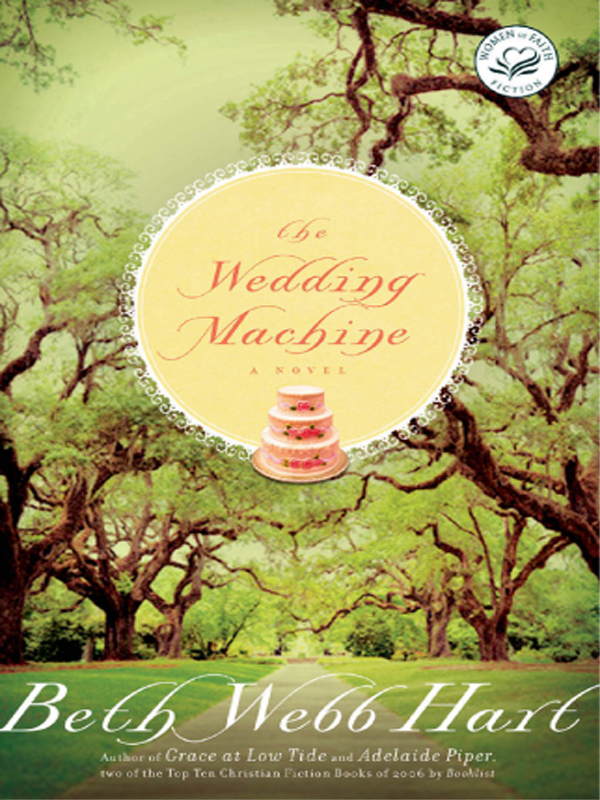 OTHER NOVELS BY BETH WEBB HART

Thomas Nelson books may be purchased in bulk for educational, business, fund-raising, or sales promotional use. For information, please e-mail [email protected]

Scripture quotations are from the King James and NIV versions of the Bible. Scripture taken from the HOLY BIBLE: NEW INTERNATIONAL VERSION
Â®
. NIV.
Â®
Â© 1973, 1978, 1984 by International Bible Society. Used by permission of Zondervan. All rights reserved.

AN EXCERPT FROM ADELAIDE PIPER

This book is dedicated
to my mother,

and all of the remarkable ladies
who make up the wedding machine
in Greenville, South Carolina.

“You'll get this down to a science, sweet,” Roberta said, hunching over the kitchen table in her beaded sea-foam cocktail dress and bedroom slippers. Her middle-aged hands were both dexterous and feminine, and they were almost always at work creating something exquisite. Ray studied them trancelike, hoping to learn their tricks. The well-worn platinum solitaire on Roberta's left hand caught the light as her long fingers curled into fists that funneled the white rice into a tiny tulle sack before cinching it tight with a thin satin ribbon.

The champagne from the rehearsal dinner was wearing off, and Ray felt like she was moving in slow motion. She took a good scoop of extra long grain rice and poured it into the plastic mouth where it spun down the funnel, filling the bottom of the gold-rimmed teacup.

“Good girl.” Roberta smiled, looking around the kitchen at the plastic jugs of stephanotis, yellow roses, and daisies that would be formed into six nosegays and a cascading bridal bouquet by her small army of friends the next morning.

Roberta's army was composed of The Jasper Garden Club, The Colleton County Debutante Club, and the Wedding, Flower, and Altar Guild of All Saints Episcopal Church. As far as Ray could tell, these ladies were beacons of refinement and the force behind all that was civilized in Jasper, a small Lowcountry town between Charleston and Savannah tucked quietly behind Edisto Island and the ACE Basin.

Jasper would have been completely hidden if it weren't for Highway 17, the crumbling two-lane road that traced the coastline, splitting cypress swamps and tidal creeks edging right up to the 350,000-acre ACE Basin, where three rivers converged to form the largest, wildest estuarine preserve on the East Coast. Jasper bordered the northeast side of the basin where dolphins, gators, minks, otters, and every manner of waterfowl and shore bird prospered from the daily six-foot inflow and outflow of saltwater, freshwater, and brackish water that rose and fell on cue like the sun itself.

Ray had become best friends with Roberta's daughter, Kitty B., seven years earlier when they stole a watermelon together one August night just before the start of their sophomore year at William Bull High School. Ray had only been in town for two weeks when the pack invited her on a ride in the back of a pickup truck.

Now the laundry chute from Kitty B.'s bathroom down to the kitchen was open, and Ray grinned at the echoed chatter of her friends upstairs. She continued to prepare the rice sacks alongside Roberta. Though she wanted to be upstairs with the girls, Roberta was grooming Ray to lead the next generation of Jasper ladies in all facets of southern etiquette and entertainingâan unspoken understanding between them.

Hilda, the beauty queen of the pack, was hell-bent on trying a new curling technique on the bride that she'd read about in the beauty section of the Charleston paper. It involved wrapping an Ace bandage tightly around sponge curlers before securing it with a hairnet.

Ray went upstairs to get some satin ribbon for Roberta from the hall closet. Ribbon in hand, she peered into the bathroom to check on the gals.

“Ash this for me.” Hilda held out her cigarette to Sis, the third and final bridesmaid and the fourth member of their pack. “And stop looking out that window. He'll be here soon enough, and you could learn a thing or two before your
own
big day.”

“Oh, I wish mine were tomorrow,” Sis whispered in Kitty B.'s ear. Sis and her fiancÃ©, Fitz, had been a hot item since high school, and they never seemed to tire of making out for hours at a time in the back seat of his Chevrolet. It was the summer before their last year of college, and Sis had never dated a soul but Fitz.

Ray could hardly believe Kitty B. was getting married the very next day. Who would have ever thought she'd be the first to tie the knot?

Kitty B. readjusted herself on the lid of her rose-colored toilet in her pink tiled bathroom as she stroked Peaches, her mangy apricot poodle, who was licking her hands as she wrung them.

“Hold still,” Hilda said while she and Sis wrapped the thick gauze tightly around the back of Kitty B.'s head.

“That hurts,” Kitty B. said. “You're puncturing my scalp.”

“Good gosh, that mutt stinks!” said Hilda, pinching her nose with a long metal hair pin. “I mean it, Kitty B. Put him down. Put him down or I'll gag.”

“No!” Kitty B. cried so loud that Peaches stood up and started to bark.

Just as he was about to lose his balance, Kitty B. clutched him to her chest. “LeMar is allergic to dogs, and this is my last night with him.” Then she raced into her bedroom, the loose end of the Ace bandage trailing down her back.

“Kitty B.!” Hilda threw her half-smoked cigarette into the pink toilet bowl. “We're not even finished!”

Roberta came to the foot of the stairs and looked up at Ray.

“Throw me that ribbon and go see about the bride.”

Ray nodded and ran into Kitty B.'s room to find her sobbing into her pink monogrammed pillow, while Peaches danced around her head with the Ace bandage in his yippy little mouth as the wide plastic curlers unraveled one by one.

Sis looked out the window, and Hilda sat at the vanity smoking a new Virginia Slim. She examined her mustache in the lamplight, making sure the peroxide had bleached every strand. “She's upset about the
dog
, Ray.”

Ray lay down on the bed next to Kitty B.

“It's okay,” she said into her friend's ear the same way her mama had comforted Mrs. Pringle when she learned that the cancer had spread to her bones. “Tomorrow you're marrying a tall, strapping opera singer from one of the finest families in the state.”