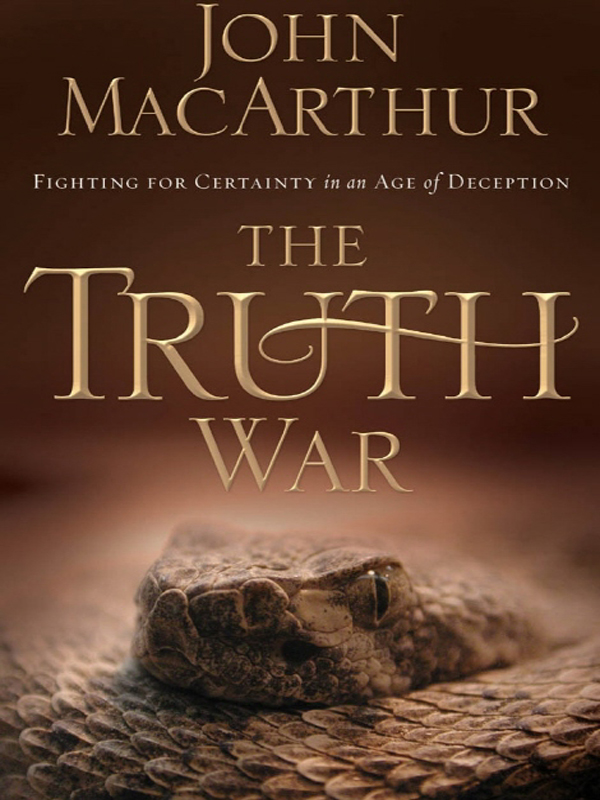 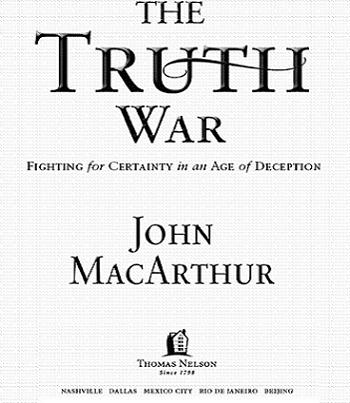 All rights reserved. No portion of this book may be reproduced, stored in a retrieval system, or transmitted in any form or by any meansâelectronic, mechanical, photocopy, recording, or any otherâexcept for brief quotations in printed reviews, without the prior written permission of the publisher.

Scriptures marked KJV are from the King James Version of the Bible.

Through the years my partnership with Phil Johnson
has proven to be divinely ordained. The contribution of his
theological knowledge, clear thinking, and strong conviction
has been essential to the success of our collaboration
in projects like these. I owe Phil a deep debt of gratitude
for his considerable editorial efforts in this book.

THE
Church of Christ is continually represented under the figure of an army; yet its Captain is the Prince of Peace; its object is the establishment of peace, and its soldiers are men of a peaceful disposition. The spirit of war is at the extremely opposite point to the spirit of the gospel.

It is in the very order of things that so it must be. Truth could not be truth in this world if it were not a warring thing, and we should at once suspect that it were not true if error were friends with it. The spotless purity of truth must always be at war with the blackness of heresy and lies.

Introduction:
Why Truth Is Worth Fighting For

1. Can Truth Survive in a Postmodern Society?

3. Constrained into Conflict: Why We Must Fight for the Faith

5. Heresy's Subtlety: Why We Must Remain Vigilant

6. The Evil of False Teaching: How Error? Turns Grace into Licentiousness

8. How to Survive in an Age of Apostasy: Learning from the Lessons of History

Appendix
: Why Discernment Is Out of Fashion

WHY TRUTH IS WORTH FIGHTING FOR

W
ho would have thought that people claiming to be Christiansâeven pastorsâwould attack the very notion of truth?

A recent issue of
Christianity Today
featured a cover article about the “Emerging Church.” That is the popular name for an informal affiliation of Christian communities worldwide who want to revamp the church, change the way Christians interact with their culture, and remodel the way we think about truth itself. The article included a profile of Rob and Kristen Bell, the husband and wife team who founded Mars Hillâa very large and steadily growing Emerging community in Grand Rapids, Michigan. According to the article, the Bells

found themselves increasingly uncomfortable with church. “Life in the church had become so small,” Kristen says. “It had worked for me for a long time. Then it stopped working.” The Bells started questioning their assumptions about the Bible itselfâ“discovering the Bible as a human product,” as Rob puts it, rather than the product of divine fiat. “The Bible is still in the center for us,” Rob says, “but it's a different kind of center. We want to embrace mystery, rather than conquer it.” “I grew up thinking that we've figured out the Bible,” Kristen says, “that we knew what it means.
Now I have no idea what most of it means.
And yet I feel like life is big againâlike life used to be black and white, and now it's in color.”
1

One dominant theme pervades the whole article: in the Emerging Church movement,
truth
(to whatever degree such a concept is even recognized) is assumed to be inherently hazy, indistinct, and uncertainâperhaps even ultimately unknowable.

THE IDEA THAT
THE CHRISTIAN
MESSAGE SHOULD BE
KEPT PLIABLE AND
AMBIGUOUS
SEEMS ESPECIALLY
ATTRACTIVE TO
YOUNG PEOPLE
WHO ARE IN TUNE
WITH THE CULTURE
AND IN LOVE
WITH THE SPIRIT
OF THE AGE.

Each of the Emerging Church leaders profiled in the article expressed a high level of discomfort with any hint of certainty about what the Bible means, even on something as basic as the gospel. Brian McLaren, for instance, is a popular author and former pastor who is the best-known figure and one of the most influential voices in the Emerging Church movement. McLaren is quoted in the
Christianity Today
article, saying at one point: “I don't think we've got the gospel right yet. . . . I don't think the liberals have it right. But I don't think we have it right either. None of us has arrived at orthodoxy.”
2

Elsewhere, McLaren likens the conventional notion of
orthodoxy
to a claim that we “have the truth captured, stuffed, and mounted on the wall.”
3
He likewise caricatures systematic theology as an unconscious attempt to “have final orthodoxy nailed down, freeze-dried, and shrink-wrapped forever.”
4

That is very popular stuff these days. McLaren alone has written or coauthored about a dozen books, and his utter contempt for certainty is a motif he returns to again and again. In 2003 Zondervan and Youth Specialties teamed up to start a line of products called Emergent/YS. They publish books, DVDs, and audio products at a prolific rate, with titles ranging from Rob Bell's
Velvet Elvis: Repainting the Christian Faith
to
Adventures in
Missing the Point
, an aptly titled collaboration of Brian McLaren and Tony Campolo.

The idea that the Christian message should be kept pliable and ambiguous seems especially attractive to young people who are in tune with the culture and in love with the spirit of the age and can't stand to have authoritative biblical truth applied with precision as a corrective to worldly lifestyles, unholy minds, and ungodly behavior. And the poison of this perspective is being increasingly injected into the evangelical church body.

But that is not authentic Christianity. Not knowing what you believe (especially on a matter as essential to Christianity as the gospel) is by definition a kind of unbelief. Refusing to acknowledge and defend the revealed truth of God is a particularly stubborn and pernicious kind of unbelief. Advocating ambiguity, exalting uncertainty, or otherwise deliberately clouding the truth is a sinful way of nurturing unbelief.

Every true Christian should know and love the truth. Scripture says one of the key characteristics of “those who perish” (people who are damned by their unbelief) is that “they did not receive the love of the truth, that they might be saved” (2 Thessalonians 2:10). The clear implication is that a genuine love for the truth is built into saving faith. It is therefore one of the distinguishing qualities of every true believer. In Jesus' words, they have known the truth, and the truth has set them free (John 8:32).

In an age when the very idea of truth is being scorned and attacked (even within the church, where people
ought
to revere the truth most highly), Solomon's wise advice has never been more timely: “Buy the truth, and do not sell it” (Proverbs 23:23).

THE ETERNAL VALUE OF THE TRUTH

Nothing in all the world is more important or more valuable than the truth. And the church is supposed to be “the pillar and ground of the truth” (1 Timothy 3:15).