The Treasure at Poldarrow Point (An Angela Marchmont Mystery) 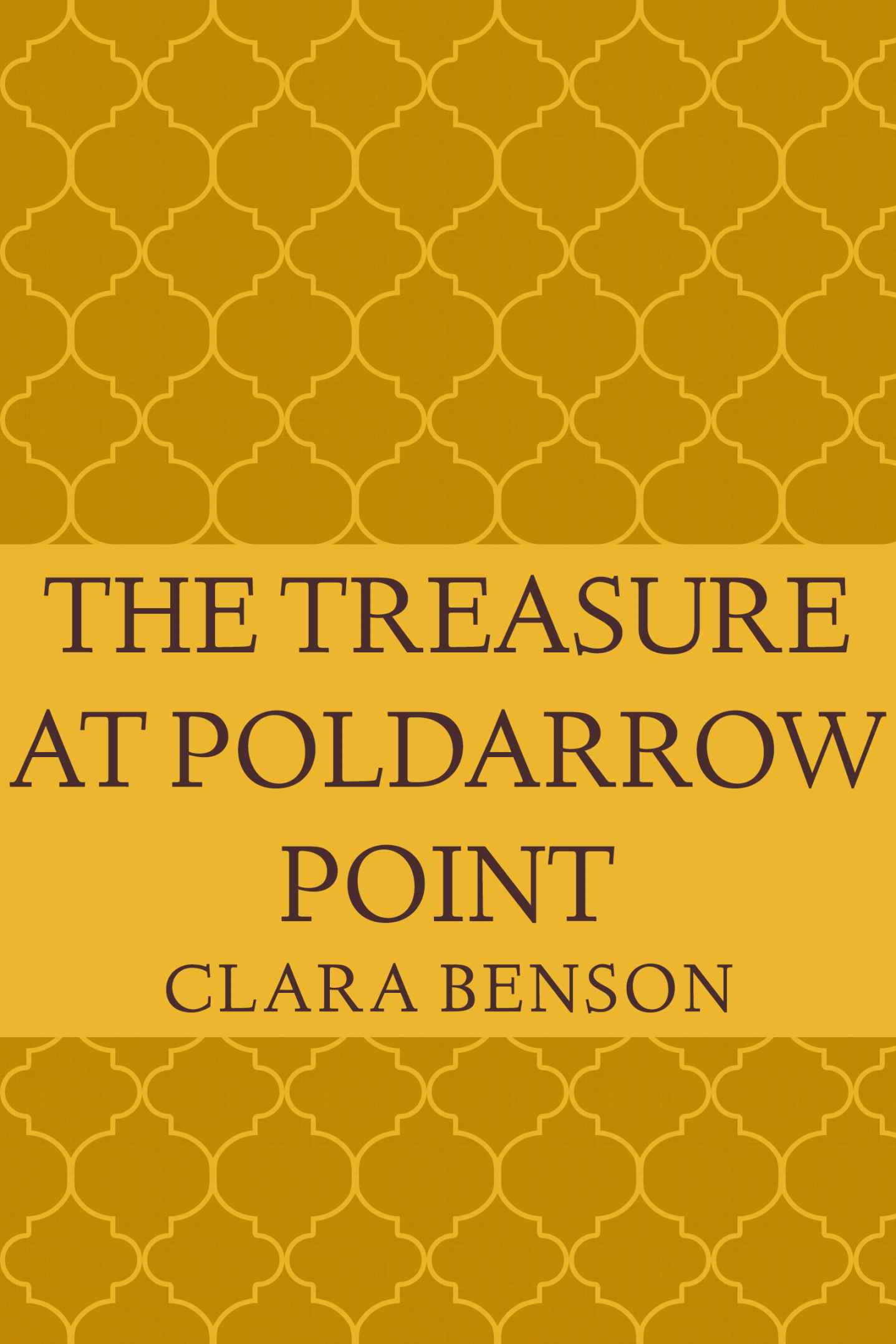 THE TREASURE AT POLDARROW POINT

The right of Clara Benson to be identified as the author of this work has been asserted by her in accordance with the Copyright, Designs and Patents Act, 1988

The characters and events portrayed in this book are fictitious. Any similarity to real persons, living or dead, is coincidental and not intended by the author

This book is sold subject to the condition that it shall not, by way of trade or otherwise, be lent, resold, hired out, or otherwise circulated without the publisher's prior consent in any form of binding or cover other than that in which it is published and without a similar condition including this condition being imposed upon the subsequent purchaser

The Treasure at Poldarrow Point

When Angela Marchmont goes to Cornwall on doctor's orders she is looking forward to a nice rest and nothing more exciting than a little sea-bathing. But her plans for a quiet holiday are dashed when she is caught up in the hunt for a diamond necklace which, according to legend, has been hidden in the old smugglers' house at Poldarrow Point for over a century.

Aided by the house's elderly owner, an irrepressible twelve-year-old, and a handsome Scotland Yard detective, Angela soon finds herself embroiled in the most perplexing of mysteries. Who is the author of the anonymous letters? Why is someone breaking into the house at night? And is it really true that a notorious jewel-thief is after the treasure too? Angela must use all her powers of deduction to solve the case and find the necklace—before someone else does.

‘What you need, Mrs. Marchmont,’ said Dr. Wilding, ‘is a holiday. A bout of influenza like the one you’ve just had is bound to leave you feeling below par. A few weeks of sun and healthy sea air will see you as right as rain.’

‘I dare say you’re right,’ she said. ‘Perhaps I have been over-exerting myself.’

‘There’s no doubt about it,’ said the doctor. ‘Fit and healthy people don’t tend to faint all over the place—especially not in the Royal Enclosure.’

‘Don’t!’ said Angela, blushing at the memory. ‘You can’t imagine what a fool I felt. And to do it in front of Cynthia Pilkington-Soames too! She won’t admit to it, but I have it on good authority that she writes the society gossip column in the
Clarion
. Now I suppose I shall be all over the papers again, and just when I was hoping for a little peace and quiet.’

‘All the more reason to get away, then. Yes,’ he went on, ‘you may consider it as doctor’s orders.’

‘Where do you suggest I go?’

‘Anywhere you like, so long as it’s not London. What about the South coast? Bournemouth, perhaps? Or if you really want to get away from it all, then Cornwall is the place to go.’

‘I’ve never been to Cornwall,’ said Angela thoughtfully. ‘A quiet hotel or a little cottage by the sea would be delightful.’

‘A cottage, you say?’ said Dr. Wilding. ‘Ah, now if it’s a cottage you’re talking about, then perhaps I can help. Another patient of mine, Mrs. Uppingham, was telling me just the other day of a house she has down there. She had been going to spend the summer there, but she broke her leg and so won’t be going anywhere for a few weeks at least. I wonder if she’d be interested in renting it to you.’

‘Place called Tregarrion, near Penzance. I don’t know whether you’ve heard of it. It’s a quaint old fishing-village—or used to be, at any rate. The artists discovered it a few years ago, and the tourists followed shortly afterwards. Still, I gather from my patient that it hasn’t been totally spoilt yet, and is still pretty quiet by comparison with St. Ives and all those other fashionable places.’

‘It sounds the very thing,’ said Angela, ‘but I’m not sure it will be possible. I am engaged every evening next week, and after that I promised to go and stay with the
Harrisons in Kent for a few days. Then, of course, there’s Goodwood, and by that time perhaps Mrs. Uppingham will have recovered and want her house back.’

‘I should have thought you had had enough of racing after that little exhibition of yours at Ascot. Well, I can’t make you do it, but I’ll be disappointed if you don’t. You can’t be too careful of your health, you know. We none of us are getting any younger.’

‘By which I suppose you mean
I
am not getting any younger,’ said Angela dryly. ‘How very tactful of you to put it that way.’

‘You are easily in as good a shape as a woman ten years younger, Mrs. Marchmont. If all my patients were as healthy as you I should make no money. But you are not eighteen. You can’t simply shake these things off in the same way you should have done twenty years ago.’ He glanced at his watch and rose. ‘Well, I must be going, but do think about what I said.’

He nodded and went out.

‘Shall you go,
madame
?’ said Angela’s maid, who had been busying herself silently about the room during the doctor’s examination.

‘I don’t know, Marthe,’ said Angela. ‘I’d like to take a holiday, certainly, but you know what the Harrisons are like. Marguerite goes into such a huff if one cancels a visit. I should have to spend the next two years making it up to her.’

‘A little, perhaps, but she is very good company, and I have been promising to go to them since last year.’

‘You do too much,
madame
,’ said Marthe. ‘Everybody wants you. It is very tiresome. The doctor is right: you have been ill and should rest yourself.’

Marthe had firm ideas as to her own influence and importance which were very nearly correct.

‘And I shall,’ replied Angela, ‘only it may have to wait a few weeks, until I have the time.’

‘You must make time. It is foolish to be afraid of one’s friends in such situations as these.’

‘I am not afraid of Marguerite Harrison,’ said Angela with dignity. ‘Whatever makes you think I am?’

The girl made no reply but her expression said much. Angela was about to defend herself further but was saved the trouble when the telephone-bell rang. Marthe
answered it.

‘Mrs. Pilkington-Soames would like to speak to you,’ she said.

‘Angela,
darling
,’ said an excitable, high-pitched voice at the other end of the line. ‘I
do
hope you’re feeling better now. How simply
awful
for you, to faint in front of the King like that!’

Angela closed her eyes briefly but was given no chance to reply.

‘His Majesty was
terribly
concerned for you, naturally, but he had to rush off and present the Gold Cup so he couldn’t stay. I did hear that he was asking about you afterwards, though.’

‘I understand you’ve been quite ill, lately. Is that why you fainted? Of course, we all know about that business at Underwood, and how you were attacked. Tell me, was it
very
dreadful?’

‘It must have frightened you out of your wits. The papers were full of it all. Is that why we haven’t seen you very much recently?’ Mrs. Pilkington-Soames lowered her voice to a more sympathetic level. ‘They do say that you had a sort of nervous breakdown afterwards.’

‘Oh, come now. You can tell me. Why, everyone knows that I am absolutely the
last word
in discretion. Now, somebody said it was influenza, but you can’t fool me, darling. Influenza, at this time of year? Whoever heard of such a thing? But seriously, Angela, I can recommend a tremendously good doctor—well, I suppose one ought to call him a psychiatrist, really. You remember Naomi McNamara, don’t you?’

‘
You
know, the one who had that rather unfortunate episode with the gardener’s boy? Nymphomania, I think they called it. Well, she saw this Dr. Gambara—or is it Gambetta?—I can never remember these foreign names, and he put his hands on her head and chanted something terribly esoteric and now of course she’s left her husband and gone off to Scotland to join the Order of the Sisters of Divine Mercy. So you see, he’s obviously an expert in matters of the mind.’

‘Do remind me to give you his card. Now, darling,’ said Mrs. Pilkington-Soames,
suddenly becoming brisk and business-like, ‘I have something to propose to you.’

‘Yes. Let me explain. I was at an evening party the other night and just
happened
to fall into conversation with a terribly clever man, a Mr. Bickerstaffe who, I was quite astonished to discover, turns out to be the editor of the
Clarion
. Naturally, I know nothing about the business—’ (here, Angela pulled a disbelieving face) ‘—but he was quite the gentleman, which surprised me, as I had always understood that newspaper people were rather
rough
.’

‘Anyhow,’ went on Mrs. Pilkington-Soames, ‘you won’t believe it, but while we were talking about this and that it
somehow
came out that I knew you. He was terribly excited when he found out, and asked me if there was any chance that I should be able to get an interview with you. Now
do
say yes, darling.’

‘Are you quite mad?’ said Angela before she could stop herself. Fortunately, Cynthia was not listening, and went on:

‘Why, just think what an
enormous
scoop it would be for me! You are one of the most famous women in England today thanks to your recent exploits. The public are simply
dying
to know everything about you. I thought perhaps I could write about you from a more personal angle, with some photographs—you know what I mean: “Mrs. Marchmont relaxing at home,” and all that sort of thing. You could give the readers your advice for baking the perfect sponge cake, or something of the kind.’

‘Oh yes, our women readers love all that domestic stuff: “When at home, our lady detective puts away her gun and takes up her rolling-pin.” We could even have a picture of you in a pinny.’

Cynthia was brought up short as she realized what she had just almost admitted.

‘Well, the
Clarion’s
readers. I was quoting Mr. Bickerstaffe directly,’ she said rather feebly. ‘Anyway, I’ve told him that you’d be delighted. It will be easy enough—we can do the interview itself at the Harrisons’ next week, and I can send a photographer round after that to take some pictures of you in your flat.’

‘I didn’t know you were going to be at the Harrisons’.’

‘Didn’t Marguerite tell you? Yes, I shall be there. Anyway, darling, I really
must
dash now, but I’ll see you next week. And don’t worry about the interview—it will just be a cosy chat between friends.’

She saluted Angela gaily and hung up. No sooner had she gone than Angela
rattled the button urgently and asked to make a trunk call.

‘Go into the bedroom and start packing my things,’ she said to Marthe as she waited for the operator to connect the call. ‘I am not going to Kent after all. I am going to Cornwall instead. I am just going to tell Marguerite now. You see, you were wrong,’ she could not help adding. ‘I am not afraid of anyone.’

‘I see nothing of the kind,
madame
,’ said Marthe. ‘I see only that you are more afraid of Mrs. Pilkington-Soames than you are of Mrs. Harrison.’

Since this was perfectly true, Angela made no reply.