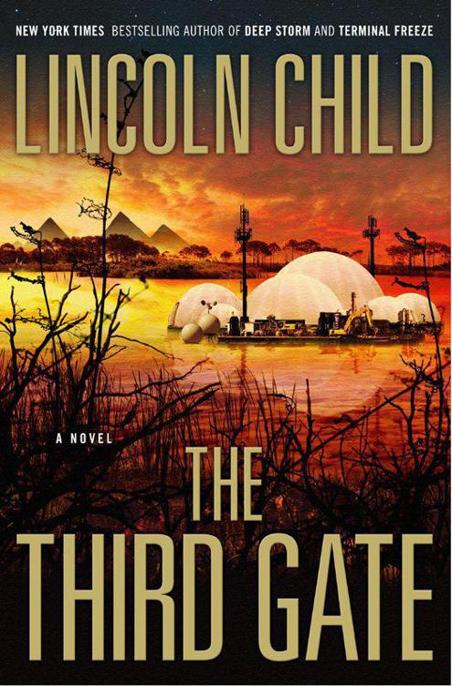 This book is a work of fiction. Names, characters, businesses, religious bodies, corporate or govermental entities, organizations, places, events, and incidents either are the product of the author’s imagination or are used fictitiously. Any resemblance to actual persons, living or dead, events, or locales is entirely coincidental.

All rights reserved. Published in the United States by Doubleday, a division of Random House, Inc., New York, and in Canada by Random House of Canada Limited, Toronto.

DOUBLEDAY and the portrayal of an anchor with a dolphin are registered trademarks of Random House, Inc.

The excerpt on
this page
is from
The White Nile
by Alan Moorehead, published by HarperCollins Publishers, Inc.

Jacket design and illustration by Will Staehle

The doctor helped himself to a cup of coffee in the break room, reached for the cylinder of powdered creamer on a nearby counter, thought better of it, then poured in some soy milk from the battered lab refrigerator instead. Stirring the coffee with a plastic swizzle, he walked across the pale linoleum floor to a cluster of identical heavy-sided chairs. The usual sounds filtered through the door: the rattling of wheelchairs and gurneys, bleats and beeps of instrumentation, the drone of the hospital intercom.

A third-year resident named Deguello had sprawled his lanky limbs across two of the threadbare chairs.
Typical
, thought the doctor—a resident’s ability to fall asleep instantly, vertical or horizontal, in no matter how uncomfortable a position. As the doctor settled into a chair beside him, the resident stopped his faint snoring and opened one eye.

The doctor glanced up at the industrial clock, set over the line of lockers along the far wall. “Ten forty-five.”

“At least you’ve managed some,” the doctor said, sipping his coffee. “It’s a quiet night.”

Deguello closed the eye again. “Two myocardial infarctions. An open-skull fracture. An emergency C-section. Two gunshot victims, one critical. A third-degree burn case. A knife wound with renal penetration. One simple and one compound fracture. An old gent who stroked out on the gurney. Oxycodone OD. Meth OD. Amphetamine OD. And those were all in”—he paused—“the last ninety minutes.”

The doctor took another sip of coffee. “Like I said—quiet night. But look on the bright side. You could still be doing grand rounds at Mass General.”

The resident was quiet for a moment. “I still don’t understand, Doc,” he mumbled. “Why do you do this? Sacrifice yourself on the ER altar every other Friday. I mean, I’ve got no choice. But you’re a big-time anesthesiologist.”

The doctor drained his cup, tossed it in the trash. “A little less curiosity in the presence of your betters, please.” He pushed himself to his feet. “Back into the trenches.”

Out in the hallway, the doctor glanced around at the relative calm. He started toward the operations desk on the far side of the ER when he suddenly noticed an increased bustle of activity. The head nurse came jogging up. “Car accident,” she told him. “One victim, arriving momentarily. I’ve set aside Trauma Two.”

The doctor immediately turned toward the indicated bay. As he did so, the trauma doors buzzed open again and a paramedic team wheeled in a stretcher, followed by two police officers. Instantly, the doctor could see this was serious: the urgency of their actions, their expressions, the blood on their coats and faces, all telegraphed desperation.

“Female, thirtysomething!” one of the paramedics bawled out. “Unresponsive!”

Immediately, the doctor waved them in and turned to a waiting intern. “Get a suture cart.” The intern nodded and jogged away.

“And call Deguello and Corbin!” he called after him.

The paramedics were already wheeling the stretcher into Trauma Two and positioning it beside the table. “On me,” said a nurse as they circled the body. “Careful with that neck collar. One, two,
three
!” The patient was lifted onto the table, the stretcher pushed away. The doctor got a glimpse of pale white skin; cinnamon hair; a blouse, once white, now soaked with blood. More blood made a drip trail on the floor, leading back toward the trauma area.

Something alarming, like a cold electric current, began to tingle in the back of his brain.

“She was T-boned by a drunk driver,” one of the paramedics said in his ear. “Coded once on the way in.”

Interns piled in, followed by Deguello. “You got a type?” the doctor asked.

People were busy now, attaching monitors, hanging new IV lines, trundling in crash carts. The doctor turned toward an intern. “Get the blood bank, call for three units.” He thought of the spatter trail across the linoleum. “No, make it four.”

“O2’s full,” called out one nurse as Corbin hurried in.

Deguello came around to the head of the table, peered down at the motionless victim. “Looks cyanotic.”

“Get a blood gas in here,” the doctor rapped. His attention was fixed on the woman’s abdomen, now bared but slick with blood. Quickly, he peeled back the temporary dressing. A dreadful open wound, hastily sutured by the paramedics, was bleeding copiously. He turned toward a nurse and pointed to the area. She swabbed it and he looked again.

“Massive abdominal trauma,” he said. “Possible supine sub-pulmonary pneumothorax. We’re going to need a pericardial tap.”
He turned toward the paramedic. “What the hell caused this? What about the air bag?”

“Slid beneath it,” the man said. “Dashboard snapped in two like a twig and she got hung up on it. They had to come in from the top with the Jaws. Awful scene, man, her Porsche was totally flattened by that drunk bastard’s SUV.”

Porsche
. The cold little current in his head tingled more sharply. He straightened up, trying to get a view of the head, but Deguello was in his way. “Significant blunt trauma,” Deguello said. “We’re gonna need a head CT.”

“BP’s down to eighty over thirty-five,” said a nurse. “Pulse ox is seventy-nine.”

The exsanguination was too great, the shock too severe: they had a minute, maybe two at most, to save her. Another nurse came in, hanging blood packs on the IV rack. “That’s not going to do it,” the doctor said. “We’re gonna need a large-bore IV—she’s bleeding out too fast.”

The nurse turned to the suture cart, grabbed a larger needle, pulled the woman’s limp hand forward to insert it. As she did so, the doctor’s gaze fell upon the hand: slim, very pale. The hand bore a single ring: a platinum wedding band inlaid with a beautiful star sapphire, whiskey colored against a field of black. Sri Lankan, very expensive. He knew, because he’d purchased it.

For a moment, the doctor just stood there, paralyzed by horror and frozen disbelief. Deguello turned toward one of the interns, and now the doctor could see the woman’s face: hair matted and askew, eyes open and staring, mouth and nose obscured by the breathing equipment.

And then, as quickly as it had come, the paralysis fell away. The doctor wheeled toward a hovering ER nurse. “Defib!” he cried.

She raced to a far corner of the room, wheeled the cart back. “Charging.”

An intern approached, injected the lidocaine, stepped back. The doctor grabbed the paddles, barely able to control his trembling hands. This couldn’t be happening. It had to be a dream, just a bad dream. He’d wake up and he’d be in the break room, slumped over, Deguello snoring in the next chair.

“Charged!” the nurse called out.

“Clear!” The doctor heard the desperate edge in his own voice. As the workers fell back he placed the paddles on her bare, bloody chest, applied the current. Jennifer’s body stiffened, then fell back onto the table.

“Charge it again!” he called. A fresh beeping, low and insistent, added its voice to the cacophony.

“Hypovolemic shock,” Deguello muttered. “We never had a chance.”

They don’t know
, the doctor thought, as if from a million miles away.
They don’t understand
. He felt a single tear gather in his eye and begin to trickle down his cheek.

He reapplied the paddles. Jennifer’s body jumped once again.

“No response,” said the intern at his side.

Instead, the doctor threw the paddles aside and began heart massage. He felt her body, unresponsive and cool, moving sluggishly under the sharp motions of his hands.

But the doctor paid no attention, his heart massage growing increasingly violent and desperate.

The sound in the trauma room, which had been growing increasingly frantic, now began to die away. “Zero cardiac activity,” said the nurse.

“No!”
the doctor snapped.

The entire room turned at the anguish in his voice.

But instead of responding, the doctor began to cry.

The Billionaire’s Desires Vol. 1 by Green, Emma M.
The More I See You by Lynn Kurland
Midnight Warrior by Iris Johansen
Where Mercy Is Shown, Mercy Is Given (2010) by Chapman, Duane Dog
Passion Light by Danielle Elise Girard
The Future We Left Behind by Mike A. Lancaster
With a Vengeance by Annette Dashofy
When Cithians Attack
Cloth Diapering Made Easy (Chapter from New Moms, New Families: Priceless Gifts of Wisdom and Practical Advice from Mama Experts for the Fourth Trimester and First Year by Gloria Ng
The Body in the Gazebo by Katherine Hall Page