Read The Texts Of Festival Online

The Texts Of Festival 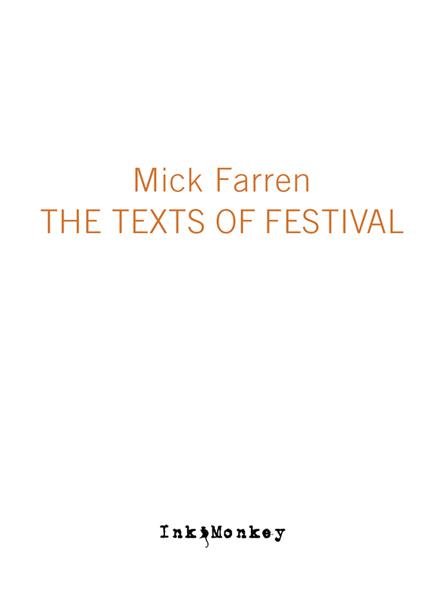 Written in 1973, almost a decade before Mad Max battled The Humungous, in ‘The Road Warrior’,
The Texts of Festival
has the raw energy of a novice straining at the leash. Mick Farren’s first novel is set in a rock ’n’ roll dystopia in the shards of a self-destroyed civilization. The few remaining patched up townships, survive on the ability to distil moonshine, cook speed, trade in the tools and artefacts of the past, and maintain a theology based in the grandiose but half remembered pantheon of 1960s rock. Already afflicted by crime and violence, the meagre social structure is further threatened by the tribal anarchy of a savage horde of mounted nomad raiders led by Iggy — a charismatic leader bent on rape, pillage, and destruction.

At the same as creating a shamelessly robust fantasy of sex, drugs, and rock ’n’ roll, Farren also casts a knowingly cynical eye over the excesses of the time and of his generation — especially the unruly, old school rock festivals — to make
The Texts Of Festival
a lasting satire on the counterculture of the early 1970s.

‘Story or essay, poem or rock song, they all carry the same fierce engagement which has never left this determinedly self-invented individualist whether arguing his case at the Old Bailey or strutting his stuff on stage at London’s Roundhouse. Read him and rage’

‘At 68, Mick Farren links back to an era when giants like Burroughs, Thompson and Morrison still strode the earth, and rock ’n’ roll outsider poetry were linked, along with wider more amorphous notions of youth-as-rebel-culture and drugs-as-shamanic-tools, standing firm against the rapacious advances of the military-industrial greedheads and all who serve them’

‘Mick Farren has had a long illustrious career as an infamous editor, journalist and English rock star… (He) has important points to make about the times we live in’

Also By Mick Farren (and available through Ink Monkey Books)

The Last Stand of the DNA Cowboys

Mick Farren was born on a wet night at the end of World War Two and has been complaining about it ever since. His career has been divided between music and literature, with digressions into counterculture agitprop, intoxicated hell-raising, helping to invent the underground press, and defending his work before judge, jury, and justice system. He has published twenty-two novels that range from the psychedelic fantasy of
The DNA Cowboys Trilogy
, to the neo-gothic
The Renquist Quartet.
He has also published two volumes of poetry and more than a dozen non-fiction works on drugs, conspiracy theory, popular culture, and Elvis Presley. Since the 1960s he has fronted the anarchic pre-punk band The Deviants. Metallica, Motorhead, Hawkwind, Brother Wayne Kramer, and the Pink Fairies have all recorded his lyrics.

The right of Mick Farren to be identified as the author of this work has been asserted by him in accordance with the Copyright, Designs and Patents Act 1988.

You may not copy, store, distribute, transmit, reproduce or otherwise make available this Ink Monkey Books publication (or part thereof) in any form, or by any means (including electrical, digital, optical, mechanical, photocopying, recording or otherwise), without the prior permission of the publishers. Such actions may result in criminal prosecution and damages claims in the civil courts.

www.inkmonkeybooks.com
features all Ink Monkey Books titles and is the place to visit to purchase them. The site has exclusive offers, features unavailable anywhere else, and news of author happenings and events. Sign up to our newsletter for the opportunity to receive free samples, and join our book club where you will be able to receive complimentary copies of some titles through our loyalty scheme.

The Texts of Festival

Writing a novel is like climbing a mountain. Consider the project as a whole and the odds are you will never attempt it. It is just too big and too daunting. The challenge must, under no circumstances be considered in its entirety. Concentrate only on the summit and you’ll go nuts. The novice novelist needs to break everything down into small manageable goals. The mountaineer focuses on the easily attainable — ‘I will just climb as far as the next ledge.’ The novelist must do something very similar — ‘I will just write to the end of the next page.’ To do any more is to risk being overwhelmed by the fear that, before it’s through, the sustained effort might just be enough push you to the edge of madness and maybe all the way over. One of the finest metaphors in all of pop literature for the plight of the writer and his or her motivation is Stephen King’s
Misery
. The writer is a bedridden prisoner held captive by a psychotic and homicidal nurse who breaks his legs with a sledgehammer when he tries to escape the typewriter.

I may have been lucky. In the early 1970s, when I commenced to write fiction, I already had a certain nodding acquaintance with the edge of madness. I had, after all, ridden the counterculture whirlwind of the late 1960s. With friends and comrade kin, I had dropped the acid. I had smoked the dope. I’d swallowed the pills and plenty more. Sex and drugs and rock & roll had yet to become a cliché and were still a way of life. We had played the music and sung the songs. We had plotted and agitated, marched and marauded, and had, in turn, been clubbed, tear-gassed, and thrown in the can for our troubles. The edge of madness had seemed close enough to be navigable on some lurid nights when we listened out for the chimes of freedom but could only hear cacophony.

In the beginning,
The Texts of Festival
was never intended to be anything more than a short story. My good friend and fellow author Jonathon Green was, for his sins and for money, creating a one-shot tabloid magazine to be given away at the 1972 Bickershaw Rock Festival — a somewhat bizarre event with The Grateful Dead and Captain Beefheart among the featured performers, but torrential rain on badly drained land turned the site into a slopping approximation of the Western Front in World War I. Jonathon had asked me to contribute to the magazine and gave me a free hand as to what that contribution might be. I suspected he had more than enough puff pieces on the various featured bands, and — right there and then — I was in no mood to inflict a rebel polemic on the readers. Instead I opted for a piece of short fiction. Back in that day my only fiction was a handful of short stories and some comic book scripts, and it was a chance to stretch and find my feet.

I sketched out a brief post-apocalyptic world that critic Alan Burridge would later describe as being populated by ‘
primitive tribes, trading in dope and beer, surviving on a decaying technology, talking a hybrid of cockney, West Indian and rock slang, feuding and raping, and speeding on “crystal”.
’ In modern times, we’ve seen so much of this kind of fantasy that the story’s originality might be seriously questioned, but, back in 1973, almost a decade before Mad Max challenged The Humungous, I was modestly pleased with myself for designing a new and inventively ravaged landscape. The short story narrative was admittedly slight. A dumb hick country boy steals his daddy’s gun and heads out for the town of Festival, one of the few surviving urban communities of ‘
merchants, bums and drag artists ritually celebrating the runes of the Rock Era — the ancient words of the witch gods: Jagger, Dylan and Morrison.
’ The basic plan of the gauche and youthful rube was to make his bones as a gunfighter or something similar. Unfortunately, after only a short trek along a broken highway, he is waylaid, relieved of his weapon, and killed by a down-on-his-luck drifter called Jo-Jo — a name lifted from The Beatles — who then carries on to Festival strapped and looking for action.

The short story only hinted at what that action might be or what might come next. I hadn’t through very much beyond a jolly 3000-word rock festival read, but, as time passed, I was overtaken by a growing desire to find out for myself. Pretending I wasn’t really embarking on anything so grandiose as my first novel, I started to flesh out the world that had only previously been a tentative sketch. I began creating ‘
tribal anarchy with its extremes of violence and spiritual insight… the embers of the hassles and ripoffs of today’s underground culture, and the joyful, sinister, apocalyptic words of its heroes
.’ I found myself breaking down this society to essentials that would afford me the most fun, and the best possible playground for my imagination, plus a wide window for allegory with which to poke my peers. Another critic called it a ‘
keen vision of a time to come when the counterculture of today ascends to a whacked-out, chemical-crazed pre-eminence
.’

As I ventured deeper into my creation the temptation was happily to incorporate anything that amused me. I had seen a Chinese Mao-era propaganda film in which Red Army cavalry, armed with AK47s and riding horses wearing gasmasks, charged across the endless Asian plain while the People’s Glorious Atom Bomb detonated in the background, and formed a rising mushroom crowd. The image of horsemen with machine guns was just too hot to resist and gave me the foundations for the psychopathic Iggy and his mounted horde of barbarian rockers — one side in the central plot conflict between the savage nomads bent on rape and pillage and the last failing semi-feudal enclaves attempting to preserve the tatters of a social order. Once started, I stole, twisted and adapted anything that took my fancy — spaghetti westerns, Sam Peckinpah movies, the samurai epics of Akira Kurosawa, cheap post-nuke B-horror films, and the real historical nastiness of the Dark Ages after the fall of Rome, Attila and his Huns, and the brutal mercenaries of The Hundred Years War. I garnished the mix with drunkenness, debauchery, elaborate steam traction engines, and, of course, a demented theology based on the pantheon of 1960s rock gods. (Let’s not forget we were emerging from a time when rock music was the primary means of counterculture communication.)