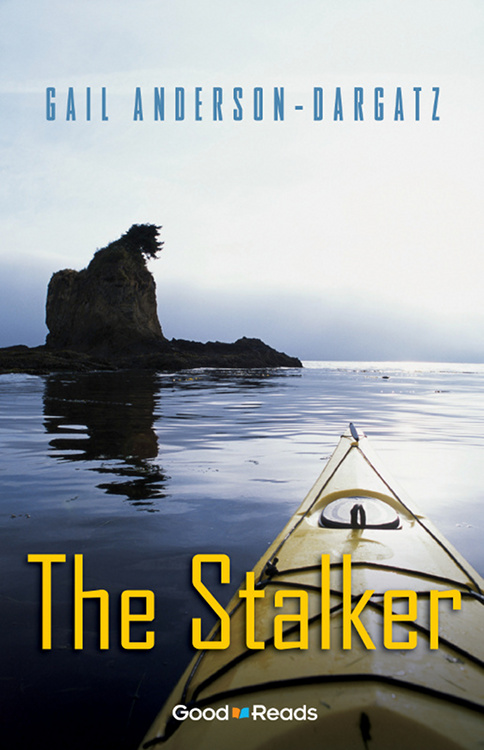 All rights reserved. No part of this book may be used or reproduced in any manner whatsoever without the prior written permission of the publisher, except in the case of brief quotations embodied in reviews.

The Good Reads series is funded in part by the Government of Canada’s Office of Literacy and Essential Skills.

Distributed to libraries and

Distributed to retail outlets by

The stalker phoned me for the first time early on a Saturday morning. The ringing of my cell phone woke me. I grabbed the phone from the nightstand and flipped it open.

“Hello, Mike,” the guy on the other end said. He sounded like one of those space aliens from the TV show
Stargate SG-1
, the ones with glowing eyes. The caller’s strange, deep voice told me that he had voice-changing software on his phone, but I felt sure I was talking to a man.

The guy hung up. I checked the list of callers on my phone, but there was no caller ID. No name, no number.

“Nut case,” I said aloud. “Thanks for waking me up.” Then I glanced at the clock. Five-thirty. I had to get up anyway.

I run sea kayak tours. My staff and I guide tourists as they paddle my boats around the many islands along the coast of Vancouver Island. I have ten kayaks, each paddled by one person.

The summer when I got that weird phone call, I had three employees. They only worked for me during the spring and summer, in the tourist season. Jason led the one-day kayak tours around the local bay. I took clients on weekend or week-long wilderness adventures. Each of us had an assistant guide. This person helped with the tour and also had first aid training.

On the longer trips, my assistant guide was also a cook. Without those great meals, the tourists simply wouldn’t come back. Sara had been my cook and assistant for five years, ever since I started my business. But Sara’s husband didn’t like her being away so much in the summer. So, to make him happy, she told me
she would work only the one-day tours with Jason. That’s when I hired Liz to cook and be my assistant guide on those longer trips.

The morning I got that phone call, Liz had been working for me for about a month. She was a great cook and easy to get along with. I liked her. But that was it. I never got involved with the women who worked for me. That would just be asking for trouble.

Still, no one can blame a guy for looking. And Liz was a pleasure to look at. She was fit from so much kayaking, and she rode her bicycle almost all year. She was a natural beauty.

My business is very small. I attract most of my clients with my website and by word of mouth, and my kitchen is my office. At six-thirty that morning, I looked up from my coffee, and there Liz was, framed by the window of my kitchen door. She usually kept her long brown hair pulled back in a ponytail. But not this morning. Her hair was loose around her shoulders. She wore a pink tank top, one of those tight ones with skinny straps, and no bra underneath.

“Hello, Mike,” she said when I opened the door.

“Liz! What are you doing here? I thought we were supposed to meet at the marina.”

I never meet clients at my house. Instead, I load enough kayaks for the trip on my trailer, hitch it to my truck, and drive to the town marina. I meet my clients there, and then we drive together to the starting point for the tour. The marina is a natural place to meet because it’s the only real tourist attraction in this town.

“So far, you’ve been late for every one of our trips,” Liz said. “I stand there waiting with the clients, making up excuses for you.” She twirled her hair with one finger and grinned. “I thought I would make sure you were on time for a change.”

Liz stepped inside carrying her “dry bag.” This waterproof bag held the change of clothes she’d need if she got wet. Her “dry suit,” her waterproof pants and shirt, were slung over one arm. We would both put on these dry suits when we reached our launching place. We had to keep warm and dry as we paddled along the coast. The kayaks sat so low in the water that we often
got splashed by waves or spray from the paddles. Storms often hit without much warning, too.

Liz lived just down the road from me. That’s how I’d ended up hiring her. I had met her at the mailboxes on the corner. She was looking for work just when Sara said she wanted to switch to the one-day tours. Even better, Liz was a trained cook. In fact, she had owned her own café in Port Alberni until the economy tanked.

I had already loaded the truck with the food and gear for that weekend’s tour, and the kayaks were on the trailer. Our group would fit into the pickup’s crew cab. There would be only four of us on this trip: me, Liz, and two guys from Vancouver. Their company developed computer programs that made maps. In short, the clients were a couple of computer geeks.

I hadn’t talked to either of them yet. All I knew were their names: Gerald Williams and Sam Andrews. A secretary had booked their tour. She told me that their boss had decided to send them on this trip. They didn’t get along, and
their dislike of each other was bad for business. The boss hoped they would get to know each other better on the kayak tour. He thought a “bonding experience” would stop their arguing.

“Are you ready for this?” Liz asked. I had told her what we were getting into.

“No,” I said. Fortunately, the trip wasn’t one of my week-long tours. I just had to get through today, and we would head home Sunday afternoon. Besides, the company that had sent these two clients my way had paid me very well. I had explained that I charged per person. Taking only two people out for the weekend wasn’t cost effective. The company had agreed to pay the bill for the eight-person tour I usually ran.

“What’s with the tank top?” I asked Liz. “I haven’t seen you dress like that before.”

I shrugged. “You don’t strike me as a tank top kind of gal.”

I felt sorry as soon as the words came out of my mouth. The tank top did suit her. I couldn’t keep my eyes off it, or her. That was the problem.

Liz, hurt, turned away. “Can I use your washroom to change my shirt before we head out?” she said quietly.

She carried her dry bag into the washroom. I took a sip from my coffee and tried to come up with some way to say I was sorry without making things worse. Then my cell phone rang. I pulled it from my pocket and answered it.

“Liz is there, isn’t she?” The caller was the man with the space-alien voice who had woken me up an hour before. He knew who Liz was, and he had to be close, watching my house. I pulled back the kitchen curtain to look out the window. The street was quiet. Most folks were still sleeping on this Saturday morning.

“Where are you?” I said. “How did you get this number?” Not even my mother had my cell phone number. She called me on my home phone. I had given my cell phone number to my employees and to my clients, but not to anyone else. I hadn’t even listed it on my company’s website.