Read The Sky Is Falling Online

The Sky Is Falling 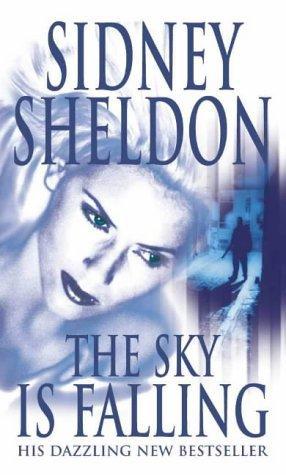 A spellbinding novel of glamour, sex, power, and murder that spans the globe.

If America had a royal family, the Winthrops would wear the crown. The popular, charismatic Winthrops have captured the imagination of the world with their public service, their enormous charity, and their glamorous lives. But in a single year, all five members of the family are killed in a series of accidents.

Dana Evans, a beautiful young anchorwoman with a Washington television network, believes there is something more sinister behind their deaths. She begins an investigation and starts uncovering compelling evidence that she can hardly believe. In her determined pursuit of the truth, Dana never anticipated the cat-and-mouse chase that leads her through a half-dozen countries in search of a remorseless killer. As she closes in on her suspect, the shocking secrets she then unearths place Dana and her young son in dire jeopardy and — in an unexpected turn of events — Dana becomes the hunted. Can Dana outwit her pursuers and expose the truth that will astound the world?

Readers should prepare themselves for the breathtaking journey through the skillful twists and turns of the plot that are Sidney Sheldon’s hallmark. A dynamite thriller filled with all the elements that have made his previous works phenomenal bestsellers, The Sky Is Falling is Sidney Sheldon at his sizzling best.

The Sky Is Falling
Sidney Sheldon

For Alexandra
The Angel On My Shoulder

Show me a hero and I will write you a tragedy.

CONFIDENTIAL MINUTES TO ALL OPERATION PERSONNEL: DESTROY IMMEDIATELY AFTER READING.

THERE WERE TWELVE MEN in the heavily guarded underground chamber, representing twelve far-flung countries. They were seated in comfortable chairs set in six rows, several feet apart. They listened intently as the speaker addressed them.

“I am happy to inform you that the threat with which we have all been so deeply concerned is about to be eliminated. I need not go into details because the whole world will hear about it within the next twenty-four hours. Rest assured that nothing will stop us. The gates will remain open. We will now begin the auction. Do I have a first bid? Yes. One billion dollars. Do I have two? Two billion. Do I have three?”

SHE WAS HURRYING ALONG Pennsylvania Avenue, a block from the White House, shivering in the cold December wind, when she heard the terrifying, earsplitting scream of air-raid sirens and then the sound of a bomber plane overhead, ready to unload its cargo of death. She stopped, frozen, engulfed in a red mist of terror.

Suddenly she was back in Sarajevo, and she could hear the shrill whistle of the bombs dropping. She closed her eyes tightly, but it was impossible to shut out the vision of what was happening all around her. The sky was ablaze, and she was deafened by the sounds of automatic-weapons fire, roaring planes, and the
wump
of deadly mortar shells. Nearby buildings erupted into showers of cement, bricks, and dust. Terrified people were running in every direction, trying to outrace death.

From far, far away, a man’s voice was saying, “Are you all right?”

Slowly, warily, she opened her eyes. She was back on Pennsylvania Avenue, in the bleak winter sunlight, listening to the fading sounds of the jet plane and the ambulance siren that had triggered her memories.

He was staring at her. “Wait a minute! You’re Dana Evans. I’m a big fan of yours. I watch you on WTN every night, and I saw all your broadcasts from Yugoslavia.” His voice was filled with enthusiasm. “It must have been really exciting for you, covering that war, huh?”

“Yes.” Dana Evans’s throat was dry.
Exciting to see people blown to shreds, to see the bodies of babies thrown down wells, bits of human jetsam flowing down a river of red
.

She suddenly felt sick to her stomach. “Excuse me.” She turned and hurried away.

Dana Evans had returned from Yugoslavia just three months earlier. The memories were still too fresh. It seemed unreal to walk down streets in broad daylight without fear, to hear birds singing and people laughing. There had been no laughter in Sarajevo, only the sounds of exploding mortars and the anguished screams that followed.

John Donne was right
, Dana thought.
No man is an island. What happens to one, happens to us all, for we are all made of clay and stardust. We share the same moments of time. The universal second hand starts its unforgiving sweep toward the next minute
:

In Santiago, a ten-year-old girl is being raped by her grandfather…

In Flanders, a seventeen-year-old girl is giving birth to a crack baby…

In Chicago, a fireman risks his life to save a cat from a burning building…

In São Paulo, hundreds of fans are trampled to death at a soccer match as the stands collapse…

In Pisa, a mother cries with joy as she watches her baby take its first steps…

All this and infinitely more in the space of sixty seconds
, Dana thought.
And then time ticks on until it finally sends us into the same unknown eternity
.

Dana Evans, at twenty-seven, was lovely looking, with a slim figure, midnight-black hair, large, intelligent gray eyes, a heart-shaped face, and a warm, contagious laugh. Dana had grown up as an army brat, the daughter of a colonel who traveled from base to base as an armament instructor, and that kind of life had given Dana a taste for adventure. She was vulnerable and at the same time fearless, and the combination was irresistible. During the year that Dana had covered the war in Yugoslavia, people all over the world were spellbound by the beautiful, young, impassioned woman broadcasting in the middle of battle, risking her life to report on the deadly events occurring around her. Now, wherever she went, she was aware of signs and whispers of recognition. Dana Evans was embarrassed by her celebrity.

Hurrying down Pennsylvania Avenue, passing the White House, Dana looked at her watch and thought,
I’m going to be late for the meeting
.

Washington Tribune Enterprises took up an entire block of Sixth Street NW, with four separate buildings: a newspaper printing plant, newspaper staff offices, an executive tower, and a television broadcasting complex. The Washington Tribune Network television studios occupied the sixth floor of building four. The place was always charged with energy, its cubicles humming with people at work on their computers. Wire copy from half a dozen news services constantly spewed out updated news from around the globe. The immensity of the operation never ceased to amaze and excite Dana.

It was there that Dana had met Jeff Connors. An All-Star pitcher until he injured his arm in a skiing accident, Jeff was now an on-air sports reporter for WTN and also wrote a daily column for the Washington Tribune Syndicate. He was in his thirties, tall and lean, with boyish looks and an easy, laid-back charm that attracted people to him. Jeff and Dana had fallen in love, and they had talked about marriage.

In the three months since Dana had returned from Sarajevo, events in Washington had moved swiftly. Leslie Stewart, the former owner of Washington Tribune Enterprises, had sold out and disappeared, and the corporation had been bought by an international media tycoon, Elliot Cromwell.

The morning meeting with Matt Baker and Elliot Cromwell was about to begin. When Dana arrived, she was greeted by Abbe Lasmann, Matt’s sexy redheaded assistant.

“The fellows are waiting for you,” Abbe said.

“Thanks, Abbe.” Dana walked into the corner office. “Matt… Elliot…”

Baker was a short, gray-haired man in his early fifties, with a gruff, impatient manner fueled by a brilliant, restless mind. He wore rumpled suits that looked as if they had been slept in, and Dana suspected that they had been. He ran WTN, the Washington Tribune Enterprises television operation.

Elliot Cromwell was in his sixties, with a friendly, open manner and a ready smile. He was a billionaire, but there were a dozen different accounts of how he had achieved his vast fortune, some of them not flattering. In the media business, where the object was to disseminate information, Elliot Cromwell was an enigma.

He looked at Dana and said, “Matt tells me we’re beating the competition again. Your ratings keep going up.”

“Dana, I listen to a half-dozen newscasts every night, but yours is different from the others. I’m not exactly sure why, but I like it.”

Dana could have told Elliot Cromwell why. Other newscasters were talking at — not to — audiences of millions, announcing the news. Dana had decided to make it personal. In her mind, she would be talking one night to a lonely widow, the next night to a shut-in, lying helpless in bed, and the next to a solitary salesman somewhere far away from his home and family. Her news reports sounded private and intimate, and viewers loved them and responded to them.

“I understand you’re going to have an exciting guest to interview tonight,” Matt Baker said.

Gary Winthrop was America’s Prince Charming. A member of one of the country’s most prominent families, he was young, handsome, charismatic.

“He doesn’t like personal publicity,” Cromwell said. “How did you get him to agree?”

“We have a common hobby,” Dana told him.

“Yes.” Dana smiled. “I like to look at Monets and vanGoghs, and he likes to buy them. Seriously, I’ve interviewed him before, and we’ve become friendly. We’ll run a tape of his news conference, which we’ll cover this afternoon. My interview will be a follow-up.”

They spent the next hour talking about the new show the network was planning,
Crime Line
, an investigative hour that Dana was going to produce and anchor. The objective was twofold: to correct injustices that had been done and to spur interest in solving forgotten crimes.

“There are a lot of other reality shows on the air,” Matt warned, “so we’ve got to be better than they are. I want us to start out with a grabber. Something that will capture the audience’s attention and—”

The intercom buzzed. Matt Baker flicked down a key. “I told you, no calls. Why—?”

Dana picked up the phone, her heart pounding. “Hello… Is Kemal all right?” She listened a moment. “I see… I see… Yes, I’ll be right there.” She replaced the receiver.

Dana said, “They’d like me to come to the school to pick Kemal up.”

Elliot Cromwell frowned. “That’s the boy you brought back from Sarajevo.”

“That was quite a story.”

“Didn’t you find him living in some vacant lot?”

“He had some disease or something?”

“No,” she said firmly, disliking even to talk about those days. “Kemal lost an arm. It was blown off by a bomb.”

“And you adopted him?”

“Not officially yet, Elliot. I’m going to. For now, I’m his guardian.”

When Dana arrived at the Theodore Roosevelt Middle School, she went directly to the assistant principal’s office. The assistant principal, Vera Kostoff, a harassed-looking, prematurely gray-haired woman in her fifties, was at her desk. Kemal was seated across from her. He was twelve years old, small for his age, thin and sallow, with tousled blond hair and a stubborn chin. Where his right arm should have been was an empty sleeve. His slight body seemed dwarfed by the room.

When Dana walked in, the atmosphere in the office was grim.

Kemal was staring at his shoes.

“Yes, there certainly is, Miss Evans.” She handed Dana a sheet of paper.