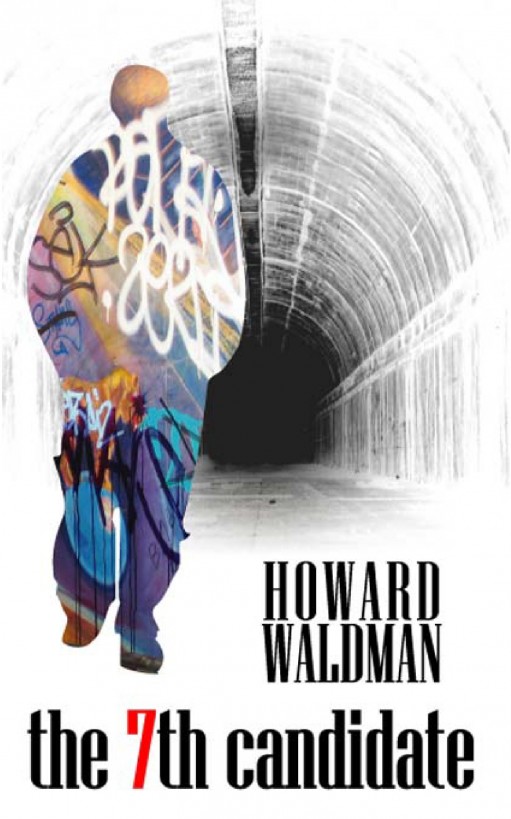 Much later, caught up in the terror, Lorz
would reflect on that queer coincidence in time and space. The
vagina-in-the-cloud accident that triggered everything occurred
both on and in February 26. February 26 was the day the republic
had been proclaimed thirty years earlier.
February 26
was the turncoat underground station
(previously
Royal Gardens
)
that celebrated the event. Lavish fireworks, cheered by millions,
also celebrated it.

To Edmond Lorz, director of
Ideal
Poster
, the booming red
bursts, like exploding heads, annually celebrated the massacre of
the brave men--among them his father--who had defended the values,
hopelessly archaic now, of the old order. Perhaps as a gesture of
defiance toward the new disorder (an absurdly feeble gesture in
comparison with his father’s), Lorz kept himself and his employees
busy underground on that murderous holiday when only essential
services like the telephone, burials and the underground itself
operated.

You couldn’t say that
Ideal Poster
was an essential service, at least not in
purely economic terms, the only terms that counted now. There were
only twelve
Ideal Poster
operators in the capital’s vast underground with its
sixty-three stations strung like dingy beads on the tangled lines.
One hundred and two kilometers of white-tiled surfaces bore an
annual total of 303,508 advertising posters, a few of them, thanks
to the
Ideal
operators,
briefly free of graffiti, mostly obscene.

Millions of passengers a year went past
those rectified posters. But how many knew that
Ideal Poster
even existed? The firm’s employees
(“eradicators” Lorz sometimes called them) were diluted in all that
elongated space, hopping about like sand fleas on an endlessly
filthy beach. Besides, they mostly operated during the slack
periods of early morning and late evening. The odd passenger who
did notice them fussing over the posters took them for the men who
slapped up the joyful images and hadn’t time to wonder at the
peculiarity of wheels on the
Ideal Poster
stepladders and the operator’s tiny labor of
eradication.

The operator who broke the pattern of
virtual invisibility was Number Seven. Lorz knew his operators by
number because they came and went so fast. This one, hired the
month before, went very fast and in spectacular fashion. He’d
already eradicated a penciled human phallus on a sheep and purged
the meadow of a sticker that called for the overthrow of the
government.

Tiptoe on his peculiar stepladder on the
Line 7 platform of the
February 26
station, Operator Seven now reached up with his brush
dipped in Basic White to eradicate a giant ball-pointed female
organ. It intruded on a cloud like a romantically long-lashed
upended eye. He lost his balance and shot his hand forward against
the poster for support.

He got none. Unexpected reaction followed
his action. Operator Seven had forgotten one of the director’s
repeated warnings: always pull the lever that immobilized the
wheels of the stepladder before mounting it, always do that. Having
to nag the operators into prudence was one of the many things that
periodically tortured the director’s intestines.

The peaceful landscape with its flock
of
Wool
Delight
sheep repelled
the operator. Uneradicated, the giant eyelike organ in the cloud
seemed to be gazing at the wheeled stepladder as it jolted
backwards towards the edge of the platform.

The rails below vibrated with the
approaching train.

At the moment that Operator Seven, foolishly
hugging his stepladder, toppled over, Lorz was speaking indirectly
to his assistant, his sole office employee, about untroubled times
way back. When business was slack and her newspaper headlines
particularly distasteful, he sometimes told his assistant, in
impersonal terms, how things had once been. He did it
apprehensively, though. He’d observed a correlation between his
need to evoke that distant time of order and the cyclic intestinal
burning.

If he’d known that the accident at and on
February 26
was setting
in motion events destined to turn his existence upside down, fire
would have burst out in his bowels then and there and dropped him
to the floor as it did twice a year on average.

Edmond Lorz was a thin, greyly handsome,
taciturn man in his mid-forties. He dressed carefully in dark or
neutral shades and wore tinted glasses even in the sunless
Ideal Poster
office located deep below
street-level in a run-down Third District building.

Whenever she heard him heading for the
filing cabinet his assistant would pause expectantly over her
invoices. But most of the time when he visited the filing cabinet
it really was to file something and he’d do it without saying
anything.

When he did have something to say that
didn’t concern business, it wasn’t always partisan information
about old times. Sometimes he would come out with information he’d
read the night before in his father’s mutilated encyclopedia and
wanted to share with someone. She was the only available
person.

In November she’d learned about Old Empire
mummification techniques. In December he’d conducted a fast and
incomplete tour of the solar system. It ended with Neptune because
Pluto had been discovered in 1931 and he had the
24
th
1928 edition of the
encyclopedia. He was content with its fossilized information and
had no desire to possess the catalogue of heavenly bodies and
national disasters of a more recent edition.

In January, he’d informed her that the
Canary Islands were of volcanic origin, had black beaches and had
been originally inhabited by a race of giants who communicated by
whistling. (Nothing in the 1928 article spoke about charter flights
dumping millions of tourists into concrete cubes thronging the
shores.) Did she know why the Canary Islands were called the Canary
Islands?

She saw it intensely: melodious clouds of
yellow birds over nude muscular giants on black beaches and herself
there. For a few precious instants it had greater reality than the
subterranean office. She answered: the Canary Islands because
they’re surrounded by water on all sides and are full of
canaries.

Wrong. When the Romans discovered the
islands they were full of wild dogs.
Canes
in Latin, hence
Canaris
.

Disappointed at the loss of the birds, she
consoled herself with the thought that maybe there’d once been
millions of canaries in the Canaries before the wild dogs devoured
them.

Anyhow, she noted
Canes
in her agenda as she did for all the unfamiliar
words she learned from him, hundreds by now, such as “ontological,”
“tautology” and “reciprocity.” They weren’t easy to place in a
conversation but she was grateful for the definitions and the
spelling. She’d claimed two years of university studies in her
letter of application but didn’t even have a high-school diploma.
Her aloof omniscient employer corresponded perfectly to her idea of
a university professor.

Dorothea Ruda was a small, lonely, dark-eyed
woman in her mid-thirties with a plain, eager face and a pronounced
Central Mountains accent. Although she’d been in his employment for
five years the director still addressed her as “Miss Ruda.”
Naturally she addressed him as “Mr Lorz” or “Sir.”

She brought left-leaning newspapers into
work. That was why he sometimes told her about the inconceivable
time back then when patriotism had been as spontaneous as breathing
air, not yet polluted, the darkest alley as safe as a
police-station, paralyzing strikes and demonstrations unknown. The
dissuasive death penalty existed. The crime-rate in the kingdom was
the lowest on the continent. Discipline hadn’t been a vain word.
Unruly pupils were birched in class. Prison-manufactured
cat-o’-nine-tails hung thong-downward in bundles like leeks at most
greengrocers’.

Dorothea Ruda was too timid to express her
feelings verbally (except three times a year) but she looked
horrified. Encouraged by that, her employer would go on justifying
rules and sanctions without telling her that as early as he could
remember, even before he was able to read them, there had been
rules and sanctions tacked on his bedroom wall. Three sheets in his
father’s square-shouldered script enumerated forbidden acts. The
earliest ones were: use of his mother’s perfume, bed-wetting and,
out of fear of the dark and love of her, sleeping with his mother
during his father’s long absences. These and later transgressions
were ranked in an ascending scale of gravity from 1 to 5 with
subdivisions a, b and c, and opposite, the appropriate punishments.
Such conduct sheets weren’t rare in those days.

That day, February 26, her headlines
blared about alleged police violence against strikers. The director
defended them (the police) to the filing cabinet in general terms,
careful not to disclose whose memory he was defending in
particular. He saw his father powerful in his black uniform and
couldn’t help remembering the almost clandestine burial. To shake
free of the image he changed the subject and spoke about the
fabulous cleanliness of the capital in that law-abiding time. He
was about to observe that
Ideal Poster
would have gone out of business in a week in those days,
when the phone rang.

His assistant answered it and Lorz went on
thinking about the absence of graffiti then, not counting the
shameless things you saw in public toilets. Or once, carved on a
tree in Royal Park (now Liberty Park), the timid heart with no
incriminating initials. Droplets of sap gleamed like pearls on the
silver bark beneath the heart. The next time he passed by, the
heart had been covered by a black square of antiseptic tar.

But one day they were everywhere, on walls,
fences and pavements: not timid hearts but subversive symbols like
circled flames, clenched fists, hammers, oblique triple arrows, all
with slogans inciting to the disorder weeks later of their sacked
apartment, one of many. Lorz couldn’t help seeing, with the
sharpness of the original vision thirty years before, the hacked
furniture, political slogans and obscenities on the lacerated
wallpaper and the spine-split volumes of the encyclopedia lying
open everywhere like white-winged, massacred birds. Once again he
saw his mother, widowed hours before, sitting on the stained carpet
in the middle of a thousand fragments of the great Chinese vase.
She was trying to piece together the precious heirloom with a
flour-and-water paste as she’d once done for his cut-outs long
before. She persisted in the impossible restoration until her death
twelve years later.

The director was rescued from those images
when his assistant, white as paper and clutching the phone,
stammered out the news concerning the accident at
February
26
.

It could have been worse, though. Seconds
before the train powered into the station Operator Seven had
managed to hoist himself onto the platform despite (as it later
turned out) a broken collarbone and five fractured ribs. The
director didn’t ask about it of course but was practically certain
that the expensive wheeled stepladder was a total loss.

He guessed what had happened. How many times
had he spoken to them about the brake-lever? A hundred times? The
ex-operator must have senselessly clung on to the accelerating
ladder instead of jumping off. Why hadn’t another passenger stopped
it? Public-spirited individuals were a vanishing species. Nowadays
cowardice and indifference reigned underground as they did at
ground-level. He thought of those late-hour trains where juvenile
thugs (“victims of society,” of course) beat old men to a jelly and
violated young women in the presence of passengers masking
themselves behind their newspapers. The next edition would relate
the incident to them.